DIY Mobile: a tutorial with many pictures 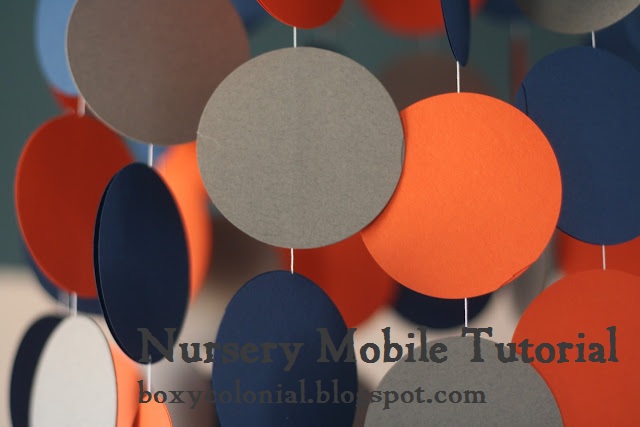 Warning! This post will contain approximately 4 million pictures because 1. tutorial! and 2. mobiles are fun to take pictures of.

If one is in search of a mobile for one's baby's nursery, one can do a quick Etsy search and find many beautiful and pricy mobiles to choose from. Quite a few of them are made out of colorful circles such as the ones you see above. They looked, to me, like the sort of thing I might be able to make myself. And I could. Although, after actually buying all the materials and putting the thing together, I understand a bit better why people charge $50 and $60 for them on Etsy, I have to say. It wasn't particularly difficult to make, but it was tedious and time consuming, and I was a bit surprised at how much I wound up spending on materials.

First I looked around for tutorials online and pinned a couple. I liked the look of this one from E Tells Tales: 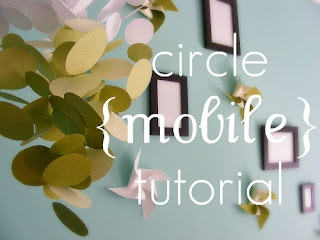 ....but I also liked this one from Dan and Brit: 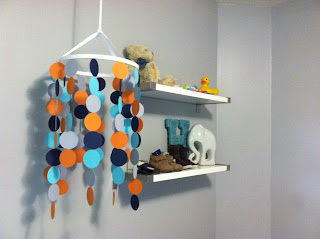 and it had the added advantage of looking a little less complicated to make. So I used it as my main inspiration/basic template.

First up a trip to Hobby Lobby for materials: 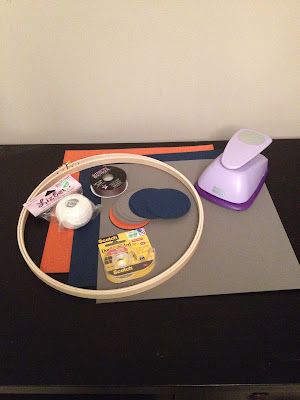 I used a 40% off coupon for the circle punch. I briefly contemplated just tracing something and cutting out all the circles by hand, but that seemed like an awful lot of work, so I sucked it up and spent....maybe $14 or so after the coupon? (I should save receipts!) on the punch that makes perfect 3 inch circles for you. I have no idea when I'll ever use it again, but I guess I should try to find another circle intensive project now, since I have it.

Other materials:
*double sided tape (I saw a lot of tutorials where people sewed their cardstock together, but I'm all about tape. Like Ramona Quimby, I feel that there isn't much scotch tape can't do)
*embroidery hoop: you just use the inside circle from this
*some kind of string or thread: most people seem to use fishing line, but I got this thick thread instead
*cardstock: I picked three different colors....how much  you need depends on how long and full you want your mobile. I wound up using 7 sheets of each color
*ribbon (for hanging from ceiling)
*spray paint (not pictured)--assuming you want to paint your embroidery hoop to match. I used some gray I already had.
*glue gun (also not pictured)

Then you start punching out circles. I was not a perfectionist at all about my circles. I sort of prioritized maximizing the cardstock (I was surprised how much the cardstock cost when I bought so much....I think I spent around $15 on it all together) rather than perfect circles. So a lot of them have a little chip missing. Which you'll notice in the pictures but, which, since they have two sides, doesn't really show when you look at it all hung up from a slight distance.

When you're tired of punching out circles and want to do something else for awhile, you can start making your strips of circles: 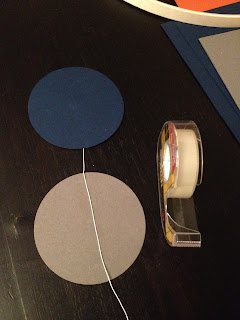 First you cut a length of string (as long as you want! It's your mobile! I did them long enough to put 7 circles on each, with just a little space between each circle). Then put down a circle under the string, with a piece of double sided tape running down the middle. 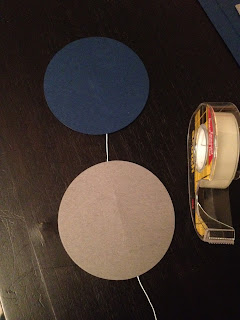 And then put another circle on top of the bottom one, to hide the string. 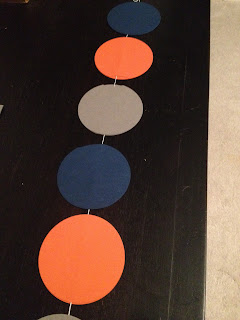 So you keep going until you have a million strands. Or, in my case, I think I wound up with something like 18. It just depends on the size of your embroidery hoop and how far apart you put the strands. I initially thought I'd put them farther apart, but then I liked the look of them really close together with some overlapping, so I wound up back at Hobby Lobby buying more cardstock. 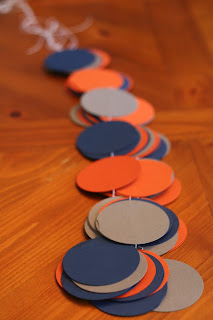 Once you have all your strands ready (uhh, or really anytime) spray paint the embroidery hoop if you're going to do that.

And once it's dry, start attaching the strands. 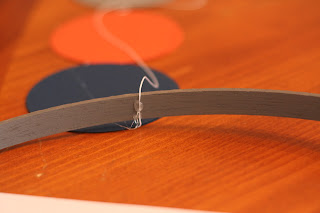 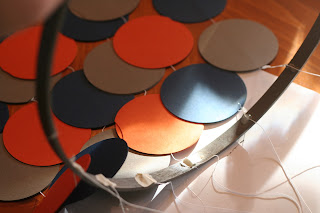 I just positioned the string from the strand where I wanted it and then attached it with a little dot of hot glue. I was nervous it wouldn't hold well enough (as is evidenced by the unnecessary masking tape in that second picture), but so far, so good. Hot glue is amazing. Also--two hot glue projects, and I've only burned myself once!

This part, honestly, is kind of a pain. It's not hard, really, but there are just so many strings and circles everywhere trying to get twisted up (although they untwist surprisingly easily), and I had to hold the hoop in place while the glue dried before I could turn it and do the next strand. But I got there eventually. It might have taken me a few days. I didn't measure the spacing between the strands. Had I spaced them out farther, it probably would have been a good idea, but since I was going for the overlapping, crowded look, it didn't really matter. I just eyeballed it. 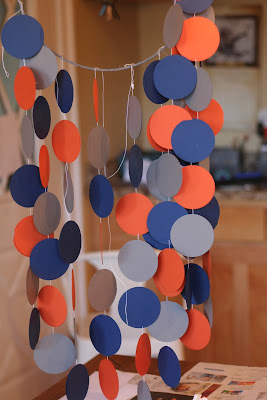 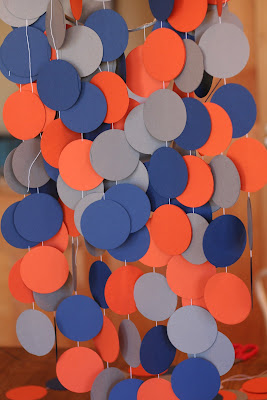 When you FINALLY have all your strands attached, you're ready to attach the ribbon. More hot glue! 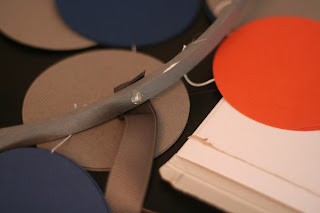 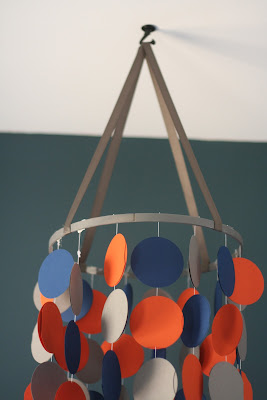 So the strings made kind of an X at the top where they intersected and attached to the ceiling.

And you're finished! Screw a hook into the ceiling and hang that sucker up! And then take a whole bunch of pretty pictures from a million different angles to show off your handywork! 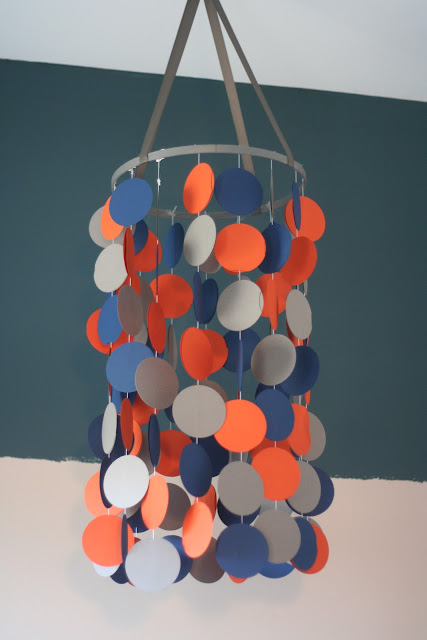 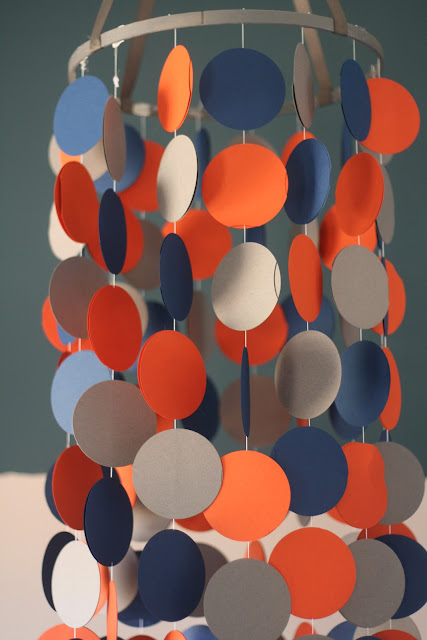 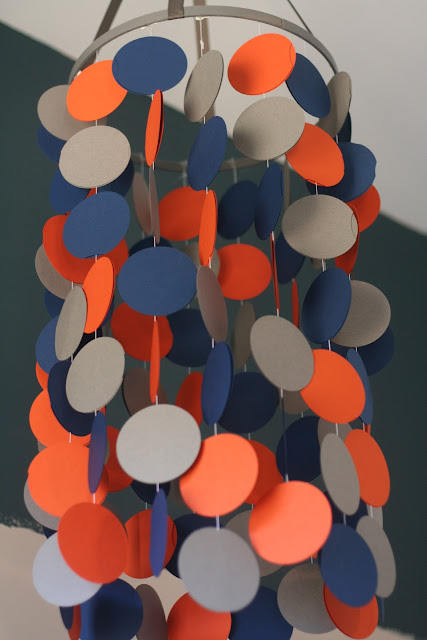 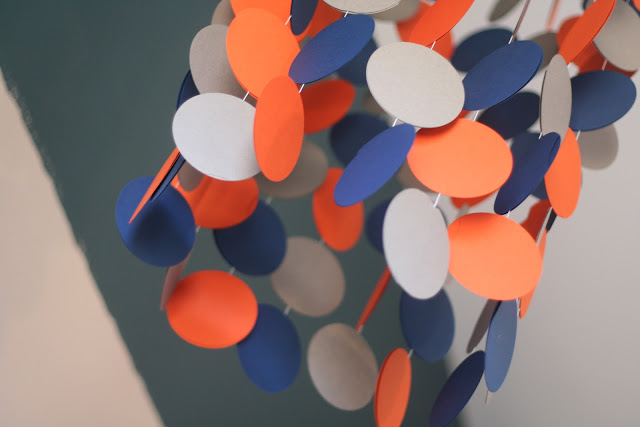 And here it is in its natural habitat, which, it turns out, is over the changing table (and the baby LOVES it): 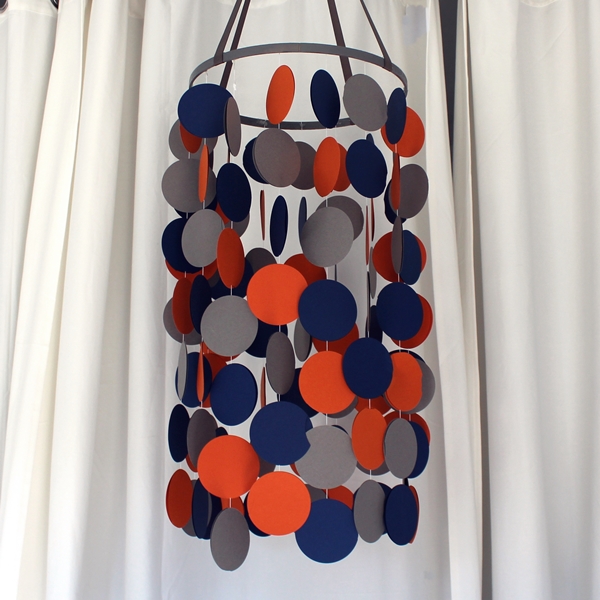