I hesitate to even make this list, because I don't want to feel tied down next October to what I thought was most important nearly a year before. If that makes sense. But I like to think that I'm a flexible enough person to not do that. I'm also hesitant because right now I want to just put "the rest of the house" on the list, and...that's not especially realistic. I suspect this house will keep us busy pretty much forever.

All of that said, goals can be helpful, so here is my very tentative, always flexible list of ten things it would be lovely to accomplish, house-wise, over the next 12 months:

1. Finish the nursery AND the master bedroom. It's pretty easy to prioritize the nursery right now, since the baby kicks me all the time to remind me. But I want to make sure we don't get that finished and then just let the other half of the room sit there, neglected. If the baby gets an awesome room, Dave and I should, too, dammit! It's also a pretty doable project, since we're leaving the carpet for now and all the furniture is staying. It's mostly about getting art on the walls and some accessories and all that.

I finally won my game of chicken with West Elm; they put duvet covers on sale the other day, and I ordered the one I've been eyeing for months. And then I used (mostly) Christmas gift cards to buy sheets and a comforter to go inside the duvet cover and all that, so a big step is already taken. 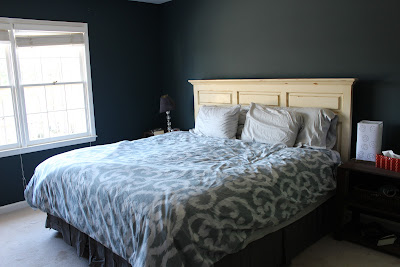 I love the duvet cover with the Newburg Green....but there is a bit of a problem--one that makes Dave very sad. I don't like it with the cream colored headboard. At first I had been planning to paint it, but then when I got the room divider curtain up I thought it would actually be fine. And I read some stuff from assorted decorators on the internet that suggested I just didn't know what the hell I was doing if I was afraid to mix whites and creams. But....I don't like it with bedding. So I think I'm back to the original plan, which is painting it very light gray and distressing it. That will probably be the biggest pain in the butt project in the room, though.

2. Redo the den: At this point I'm nominating the den for "if we only get around to totally finishing one room, start to finish this year...." It's perfectly serviceable as is and doesn't drive me TOO crazy....but I have a leather couch that's supposed to move in there sitting in my garage right now, and if it sits there once the humidity starts to kick in in early summer, it's never going to survive. And I want my wallpaper! 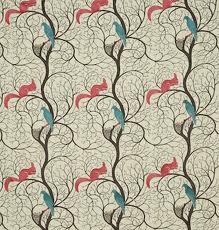 3. Finish painting trim and hanging art in Ari's room: poor Ari. His was the very first room to get painted, before we even moved in, and yet he's had half painted trim in there and empty frames leaning against the walls for months. I hate painting trim. Especially with carpet on the floors. But I will get it done! He has some Ribba frames from Ikea that he'd like some Hetalia art in. And I'm also personally hoping (hint, hint Ari!) that he'll use some of the art supplies he got for Christmas to draw something wall-worthy himself: 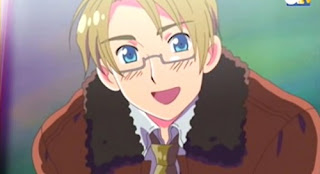 4. Get hardwood floors in (at least) Milo and Gus's room: Ideally we'd rip up all the carpet in the house, but that falls into the don't bite off more than you can chew category. But with August's allergies, I'd like to make the floors in their room a priority. And we'll toss in finally getting around to the other little projects in there....some lights I need to hang, maybe a couple of display shelves for them, a lamp needs spray painting....

5. Vegetable garden: I planted a garden most years at our old house, with varying degrees of ambition, but my efforts were severely hampered by the fact that we lived in the middle of the woods. We have no such problem here, and I intend to take advantage of our relentless sunlight. We'll probably start out small, with just a few garden beds out back. I'd also like to do some fruit bushes and maybe a row of dwarf or semi-dwarf fruit trees somewhere out there.

6. Build some furniture: I bought Dave a Kreg Jig for Christmas, and I got Ana White's book, so there's nothing to stop us now! We still need to do the table for the kitchen, and I also have big plans for a coffee table with toy storage and a low TV cabinet for the den.

7. Chalkboard Wall in Kitchen: There's plenty more to do in the kitchen, but this project is pretty small. I want a chalkboard wall somewhere, and there's a wall right next to the center hall in the kitchen that would be perfect for it. It's out of the wayish, but there's not enough room to do much else there. My plan is to buy galvanized steel, paint it with chalkboard paint, and then put a nice frame around it. It's something both my older kids and the baby, when he's a bit older, will have a lot of fun with, I'm thinking. And then we'll probably need to order some zombie magnet poetry for it: 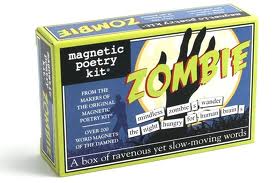 8. Furnish the sunroom, somehow or another: I'm not willing to commit to a full scale sunroom plan at this point (although that would be nice), but I'd like to get some seating out there and USE IT at least. It's a nice room.

9. Figure out how to help sad porch/deck and make some progress on it: I am overwhelmed by how sad our screen porch and deck are right now. I have no illusions that we're going to make them beautiful and perfect in 2013, but I would like to come up with a plan to improve them and start in on it. It has the potential to be a really cool space. But only potential.

10. Get rid of carpet in master bath: Of course, this was supposed to be one of the first things that happened after we moved in. But before we tile it, we need to figure out a way to make it less freezing. And I worry that that will be very, very expensive. But still. There must be a way! One possibility is doing either hardwoods or the vinyl that looks like wood just so it won't be as cold as tile. At least for now. I'm not sure what the long term plan in that bathroom is or how long it's going to be before we get to the long term....