Babies and their accessories: specifically slings and clothes

I know everyone else is still posting about Christmas, but I am done with that! Moving on! Mostly because I have a post Christmas deadline looming, and a half finished nursery staring at me every time I go in my bedroom.

I'm still kind of impressed with how much we've gotten done in the past couple of weeks, but I keep adding more things to the list, so that it never really shrinks as much as I would like for it to. Plan is for board and batten to go up this weekend (it strikes me as a little crazy to try to do this the weekend before Christmas, but I think we're going to anyway. Try, that is. We'll see what happens). I have the mobile pretty much finished, but I have to go buy a hook to hang it with before I can take pictures. We put the crib together last night, but it doesn't really merit its own post. It's just a crib. It will look nice with board and batten behind it and a mobile and whale hung near it, though. And I've got a couple of other projects coming up that I'll keep as SURPRISES for now. Everyone loves surprises, right?

At any rate, my hope is to roll out posts about a few more nursery projects in the next couple of weeks AND be able to do a big whole nursery post before there is a baby to live in it. I need to hold him in a couple of extra days and make him an Aquarius and then that will be more doable. I tend to make 9 1/2 pound babies, though, so holding him in might not be the best idea.

Anyway, so TODAY I thought I might stall some more on posting about actual projects by doing a post about baby STUFF. I know that this sort of thing is done, because it seems like every blogger in the whole world is pregnant right now, and I've seen many such posts.

Even though I already have three kids, the youngest one is seven, so I don't have too much baby stuff still lingering around from his infancy. We didn't know if there'd be a fourth, so all except the MOST SPECIAL things left long ago.

Fortunately, I held onto my Kangaroo Korner Adjustable Fleece Pouch. I walked Gus to sleep in that pouch every night for months, so I held onto it mostly for sentimental reasons. And it's very lucky I did because....they don't make them anymore! The horror! I'm not sure I could handle having a winter baby without my Kangaroo Korner Adjustable Fleece Pouch. Here's what it looks like, with a baby all snuggled up inside: 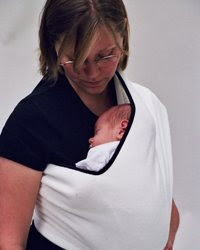 Only mine is light brown instead of white. If you don't already have a Kangaroo Korner Adjustable Fleece Pouch, then I'm really sorry. You should probably just have all your babies in the summer. Or look on ebay or something.

I also saved my Maya Wrap, but mostly just because I never got around to ebaying it. But, still, looks like they're crazy expensive new now, so this is probably a good thing.

And I saved my Ergo, too, but it was in the basement/garage of our old house, and there was this particularly rainy fall a few years back, and....it didn't fare too well. I have a new on my Amazon wish list now, though (not this color. I can't remember which color. But not this one): 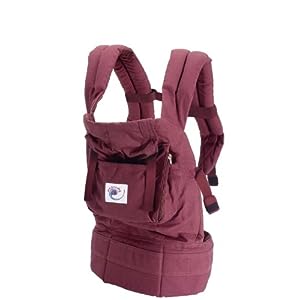 So when I found a Moby Wrap:

....at Goodwill, back when I was newly pregnant, for something like $4, I snatched it up. It looks brand new, in its handy carrying case, complete with instructions. Which I should probably take a look at at some point soon.

In addition to lots of things to carry the baby around in, I have lots and lots of things to dress the baby in. This despite having bought, by my calculations, precisely four items of clothing new. The rest is all hand-me-downs (from my kids, but mostly from other, closer in age, friends' kids) and from thrift stores.

So the big question is....what should the baby wear home from the hospital?! For all babies past, I bought a specific outfit for this occasion. I didn't (or at least haven't) this time....for one thing, I have SO MANY CLOTHES. For another thing, we live 5 minutes from the hospital now. I know that this makes no difference, really, but for some reason it feels weird to buy a special outfit for a 5 minute drive whereas it felt perfectly reasonable for a 25 minute drive. Anyway. Here are a few options: 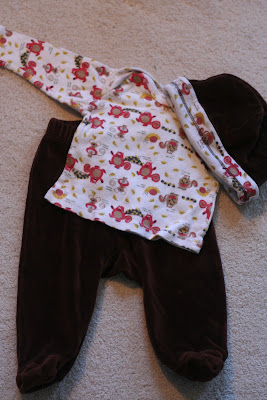 This is the outfit Gus wore home, actually. So probably I shouldn't use it, because in 20 years I might get the pictures all mixed up (unless this baby comes out with a moustache or something). But it's still so cute! It has fat squirrels on it! I was also pleased to note, when I pulled it out, that it's a 3 month size, but it still fit my giant August (all 9 lb, 5 1/2 oz of him) just fine when he was 2 days old. So this baby should get to wear it at least once (unless he weighs 12 pounds. Which he'd better not). 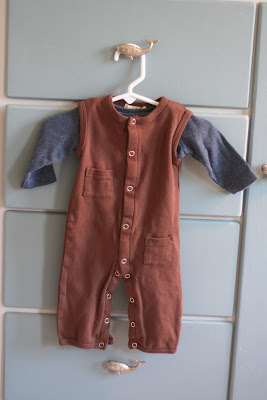 The little brown overalls are one of the only things I bought new (onsie is from the thrift store). I really like knit overall things on babies. I wonder what he's going to keep in those little pockets? 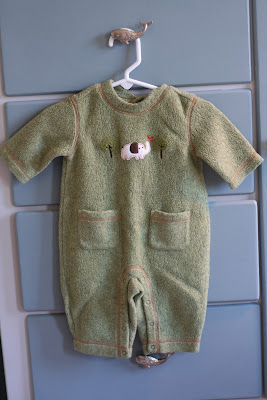 This one looks very cozy, no? It's fleecy! It has an elephant! If the heat breaks in our car, we should go with this one. But I don't anticipate that. 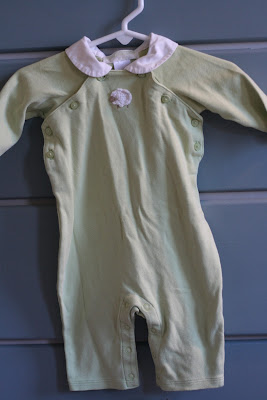 This one is from Janie and Jack (by way of the thrift store), so it's FANCY! If the baby wears this one home, all the nurses will think we're fancy. 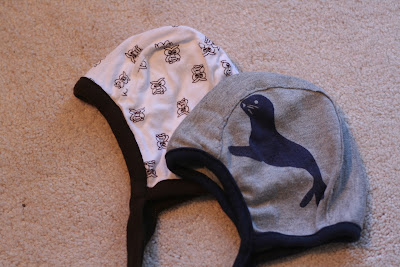 And here are two of the other things I bought new: pilot hats from Etsy. I love baby pilot hats. Especially ones with seals and owls. When babies are little, their hands don't work well enough for them to get their hats off! Especially the ones that tie! And that's another reason to have a winter baby. Along with the fleece pouch.

Okay, there you have it. Feel free to cast your vote for baby's first outfit! And next time...an actual post about doing stuff in our house!
Posted by Gretchen at 10:22 AM

Email ThisBlogThis!Share to TwitterShare to FacebookShare to Pinterest
Labels: baby