Back to work! No-sew curtains for the nursery

No more of this taking time off for Christmas nonsense; I am 3 weeks and 1 day away from my due date. Predictably, doing the board and batten right before Christmas did not actually happen. But we made up for it a bit by spending the evening before Christmas Eve making our very first no-sew (or, umm, any kind of) curtains.

In contrast to the mobile, I was pleasantly surprised by how quick and easy this was. It's nice when that happens.

I came across this fabric a few weeks ago on Carousel Design's website:

....and I decided I must have it. I had been thinking of just a plain gray and white chevron, but this was a lot more exciting. And not too expensive, at $7.50 a yard. I ordered 6 yards, and I have enough left over to make a skirt for the crib. I got away with this, however, by making two panels out of the 54" width, which was pushing it a bit. I think I'll be fine with it on these windows, but if I were going for a more formal look I'd want them wider, which would mean ordering twice as much fabric. A dilemma I'm giving a lot of thought to, because I'm hoping to make another set for the dining room soon.

Anyway. I read through this post on Young House Love before starting, but, honestly, there's not a whole lot to the whole thing once you know that HeatnBond iron-on hem tape exists. You just cut and iron and make four big rectangles, and you have curtains!

While we were working on them, I told Dave that I think "I wasn't really a perfectionist about this" should be the new subtitle of this blog. We measured so that things would be pretty much the same length and all that, but we knew the panels were going to be all wavy and bunched up in the end, so we didn't worry overmuch about perfectly straight edges or anything.

I won't get into a step by step tutorial since there are a million of them out there already and since it's pretty much exactly what you expect anyway. Here are a couple of pictures of the process: 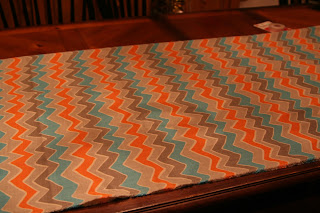 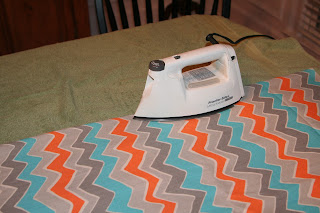 We folded it in half and ironed down the seam before cutting it down the middle. 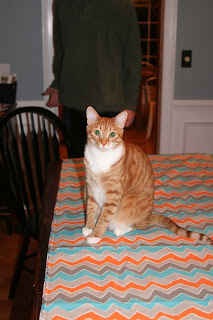 Gavroche thought he should sit on the fabric because he's orange, too. Incidentally, the colors looked darker on the website. I was a little disappointed, but I still like it. 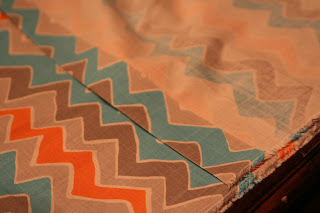 This is what the hem looks like after you make it. No sewing! Exciting! 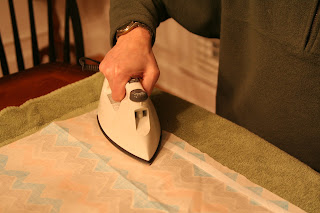 Our iron was happy to finally have something to do again after a long, LONG vacation.

The whole process took maybe three hours start to finish, and I suspect the next set we make will go faster since we've had some practice. We picked up brushed nickel rods and clips at Lowe's the next day and hung them up. New camera did its best rising to the occasion of taking backlit pictures. Not too much backlight, since the sun hasn't been out here for days: 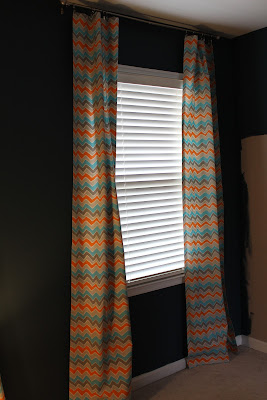 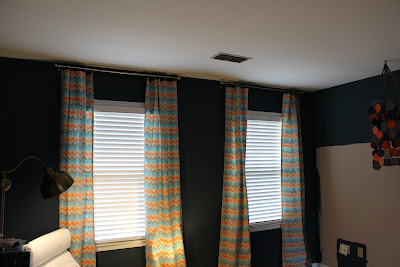 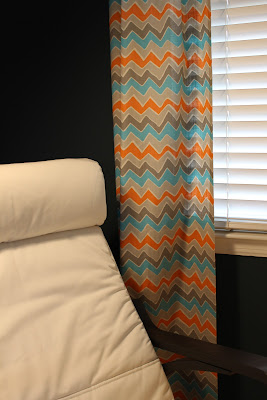 Sharing with:
Happy Hour at Design, Dining, and Diapers
Under the Table and Dreaming's Sunday Showcase
The Shabby Nest's Frugal Friday
Posted by Gretchen at 4:22 PM