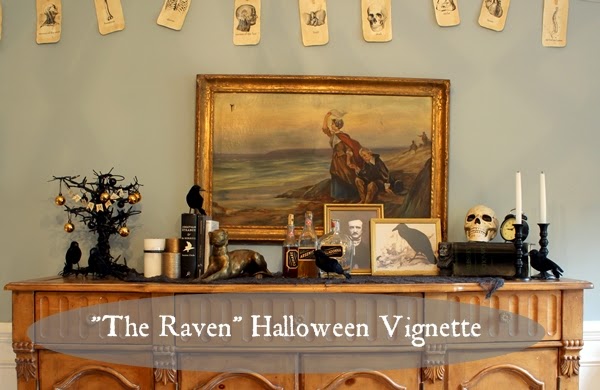 I showed off my Halloween tree the other day, but today I bring you....the rest of the top of the buffet! I've been having fun switching out the stuff on top of the buffet seasonally...it's such a big surface, and I never really knew what to do with it before; having permission to get all theme-y with it makes it easier.

I don't think I ever posted a picture of the whole summer display after I added Brass Hound, so let's revisit that first, shall we? 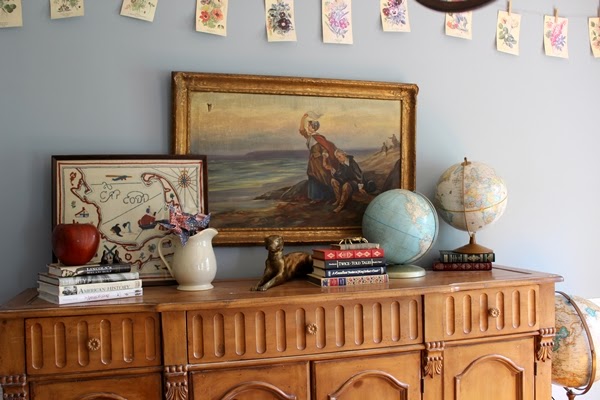 Left to right, we have my halloween tree with tiny banner and the first of several dollar store crows (we're pretending they're ravens, though). Then some candles that I bought and used in last year's Thanksgiving centerpiece.

The spooky books (bookended by Brass Hound) are Jonathan Strange and Mr. Norrell, Frankenstein, and a collection of Sherlock Holmes stories.

And next up we have the fun with printables parts. 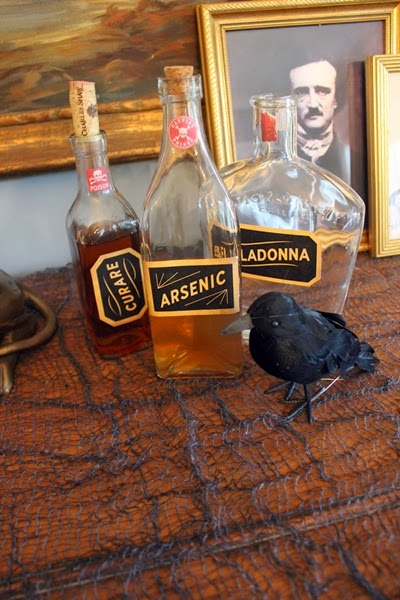 (the black lacy thing is from the Dollar Tree, btw).

I've had these "apothecary-inspired" labels from Country Living in mind since Brooklyn Limestone linked to them last Halloween. So I knew I'd be printing some out this year and started looking for some bottles to go with them a little while back. The widest bottle is from some real life whisky that Dave bought at some point in the past. I told him to save the bottle, even though I didn't remember at the time why I wanted it. Go me. Then I found a little Anchor Hocking bottle for a dollar at the thrift store, and that's holding my curare now. Then I ran out of time for thrifting bottles and picked up the last one for $5 at Hobby Lobby.

The instructions on Country Living say to print the labels out on sticker painter, but I decided to try regular paper and spray adhesive instead to save some money. And it worked great!

The "poisons" are apple cider vinegar and water mixed with a little vanilla. I didn't put anything in the big one since I had neglected to save the lid for it. I guess someone already drank all the belladonna.

And then I printed out these two pictures: 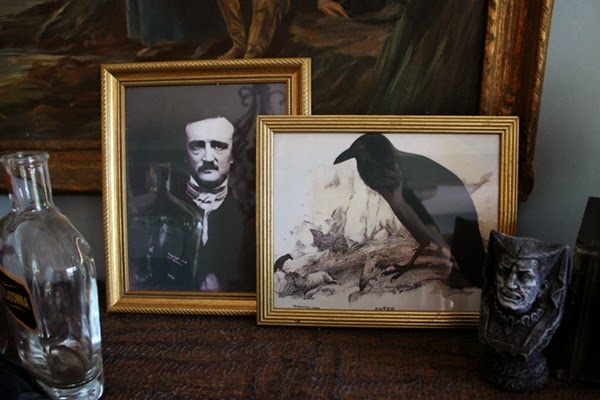 Two gold thrift store frames. For the first one, I just googled images of Edgar Allan Poe and found one that was big enough to look good printed out as an 8 by 10. The raven is from The Biodiversity Heritage Library. They're my go to source for free printables, assuming it's a printable of an animal that I want, which it usually is.

Don't need a raven? Perhaps you could incorporate some spiders into your Halloween decor: 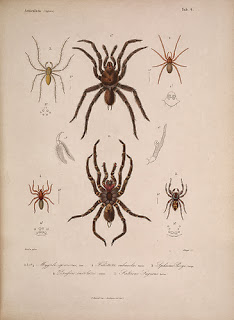 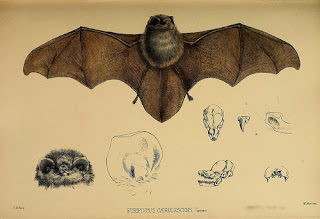 The creepy lady is another Dollar Tree purchase. And then there's an old unabridged dictionary, because nothing says scary like a GIANT BOOK with lots of WORDS in it.

On top of said terrifying dictionary is a Target skull from last year and, uhh, a clock. Because, umm....mortality? Sure. And then a couple more candles for good measure.

Oh, and in the top picture you can see that my anatomy flash cards from last year are back up, too.

Okay, so THEN, just when I was writing this post, my friend Kristi stopped by out of nowhere (I mean, she lives right down the street, so it wasn't too startling) and.....gave me an awesome raven! I was all, "where did you get this raven?!" and she said, "the store" and then disappeared into the night. My dogs were barking, and I think her kids were waiting in the car? Anyway. That's all I know. I don't know where to put him yet. Because I just got him. But here he is: 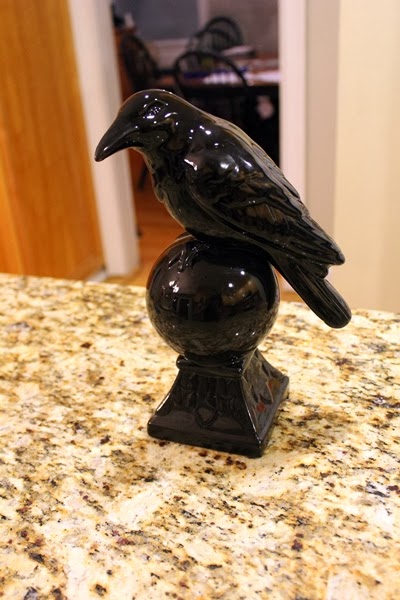 (Bonus! I had to clean part of my kitchen, because I couldn't find a single space to set him for the picture where he wouldn't be surrounded by piles of crap)

Update: Kristi says he's from Ross. Go get one!

Linking with:
Link Party-Palooza
Monday Funday
Posted by Gretchen at 7:30 AM