We made a couple of new additions to Abe's gallery wall the other day. And I was thinking, too, that it came together so bit by bit that it might be good to do an overview of everything that's up there now (although I am not declaring it finished. It might never end!) 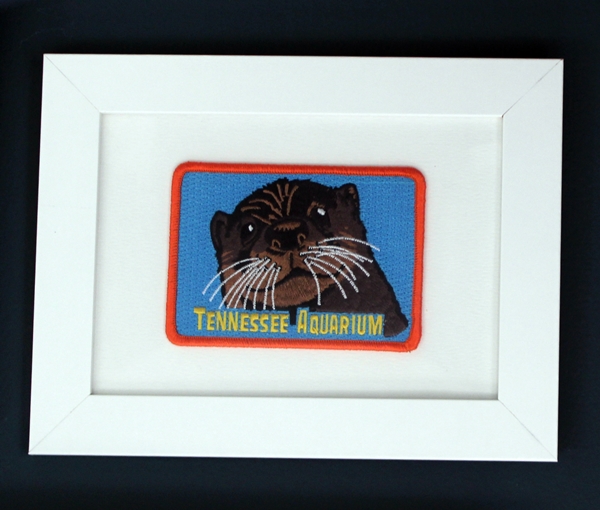 This is a patch with a river otter on it that I picked up last time we visited the Tennessee Aquarium, then taped to piece of white cardstock and stuck in the cheapest frame Ikea sells. I think I paid $3 or $4 for the patch, so some pretty cheap wall art. I like it because 1. the colors are right! 2. Abe had already visited the aquarium twice by the time he hit six months old, so it seemed like a souvenir was in order and 3. OTTER! (it's not entirely thematically appropriate, since it's a river otter and not a sea otter. But close enough). 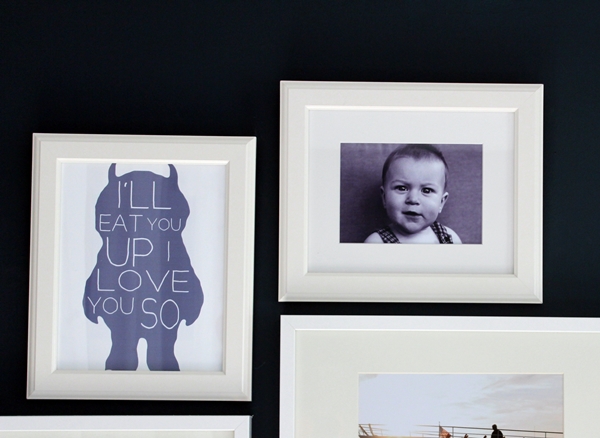 On the right is one of Abe's seven month pictures. I have a newborn picture and a three month picture of him, and now this one (plus one of him with all his brothers).

And on the left is maybe my current favorite thing on the wall...this downloadable/printable Where the Wild Things Are quote/graphic from Olive and Birch via Etsy. I generally have mixed feelings about hanging wordy things on the wall, but actual real quotations from books I can totally get behind (here is where I was going to insert this thing about how I wish it said what it really says in the book, which is "We'll eat you up we love you so" ....then I looked at the listing again and found the place where it says "Also available in We'll Eat You Up We Love You So." Oops. So I'm stuck with the not-quite-how-it-is-in-the-book "I" version because I'm not a careful reader. Ironically.

(When I was applying to grad school, to get an advanced degree in English, I was such a not careful reader that I accidentally applied for a program that didn't even exist at one school. They let me in anyway, after calling to clarify which of their real programs I had meant to apply for).

Okay, so anyway, the way this went down was that last week East Coast Creative had a post with 12 free nursery printables. I have a nursery, and I like free things, so I picked out a couple of my favorites and sat down to print them out. But I could.not.get.them.to.print.the.right.size! It was frustrating. They kept being either too big or too small, and I had no clue why.

Then I scrolled down to the section where they threw in some bonus not quite free printables and followed the link to Olive and Birch on Etsy. And I found that print up there that I loved so (so much I could eat it up). I'm not sure why I was so confident that THIS would print out correctly. I guess I figured that paying $5 gave me some extra protection. Like  if it DIDN'T print out correctly, the owner of Olive and Birch would fly in from Utah to fix my printer for me, because I'd paid five dollars.

But it printed out just fine with no such intervention necessary. And now it's on the wall and it makes me happy.

And now here's the whole thing (so far): 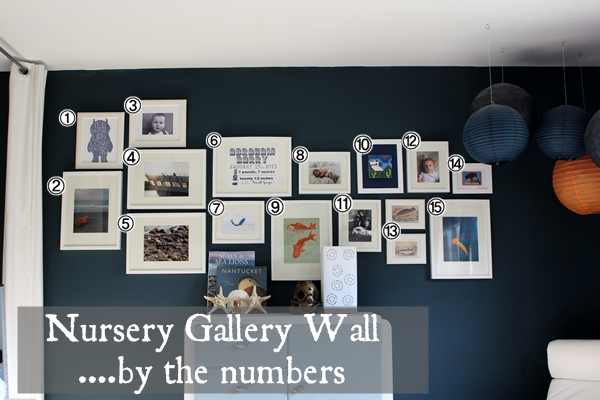 Those numbers aren't there in real life. I put them in with MAGIC.

1. I just talked about that one!

2, 4, 5. This is where it all started! These three prints are all pictures I've taken on family trips to Cape Cod.

6. Ari designed this sort of graphic birth announcement, with minimal help from me.

11. 1st photo ever of all 4 boys (in hospital) (I talked about this first big gallery wall expansion here)

15. photo of jellyfish I took at the Georgia Aquarium

I love looking at this wall, and I love the mix of things. Nothing on this wall was expensive, but most of it has some sort of personal meaning. And the things that don't are awesome anyway because they're narwhals or whatever.