I have an incredible before and after to show you today. Ready?

I'll start with the after: 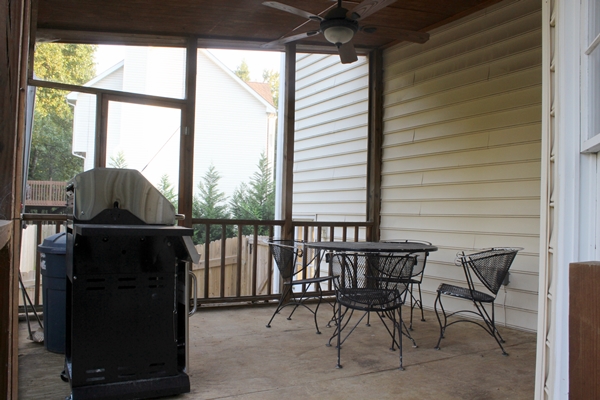 No, really: that's the after.

"But," you might be thinking, "that's a crappy screened porch with a plywood floor and a patio set that needs painting. Also, your fan is ugly."

That's right! That's what it is. And I love it SO much right now.

The terrifying before pictures will show you why: 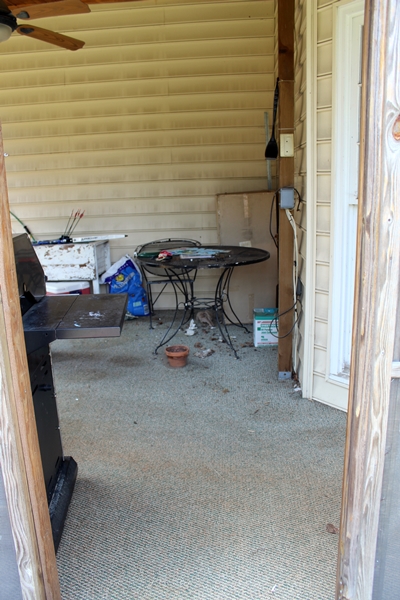 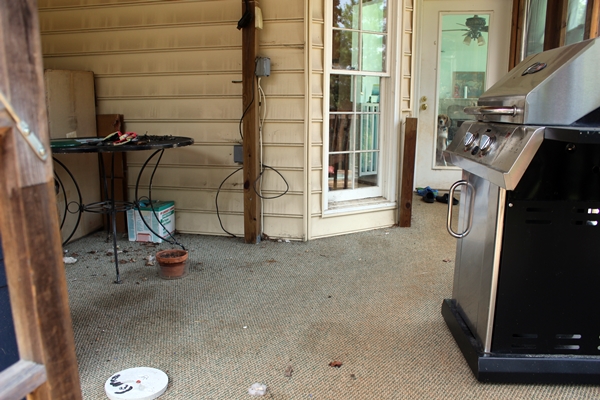 And we did have the house pressure washed last year, but I guess the porch was considered inside enough that it got skipped? Maybe because of the carpet.

I'd been pretending this porch didn't exist ever since we moved in. Dave did rebuild the dangerous steps awhile back, but other than that there was just so much that needed doing that it was overwhelming to even think about where to start.

It turns out the carpet was a great place to start.

You can tell from the picture that the carpet was nasty, but you really couldn't get the full effect without seeing/smelling it in person. We live in Georgia. It rains lots and lots here, and when it's not raining it's still very humid, and, basically, if you want to carpet your outdoor areas for some reason, you should live somewhere else. IMHO.

Dave's been saying we should go ahead and rip up the carpet for months and months now, but I always shut him down. I was worried we'd get started, and it would turn out to be much more complicated and involved than we'd anticipated, and we'd have to spend the rest of our lives dealing with it. Pretending it wasn't there for the foreseeable future seemed like a much more reasonable plan to me.

But then, a couple of weeks ago, Dave suddenly announced, in an uncharacteristically assertive way, "I'm going to go rip that carpet up." And then he did. And it was super fast and easy (if disgusting). It's nice when things turn out that way. 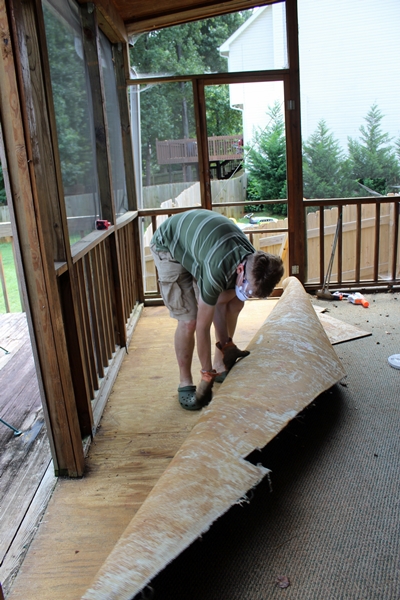 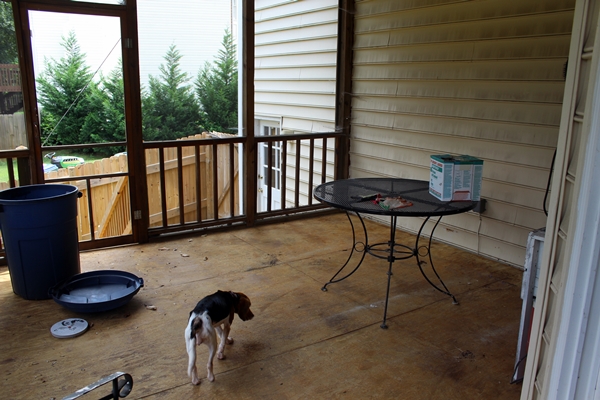 The carpet was glued down, but the glue had long since lost all of its adhesive abilities, so the carpet pulled right up. The glue residue is still there on the plywood, but it's not a big deal for now. It's not worth trying to sand it down or whatever until we figure out what we're going to do out there long term.

The carpet is mostly still sitting on the ground next to the porch, by the way. Our big disposal plan is cutting it into sections that fit in the trash barrels and throwing it out a bit at a time every trash day.

Inspired by Dave's ambition, the kids and I did a little more sprucing up. We cleaned all the siding that we could reach: 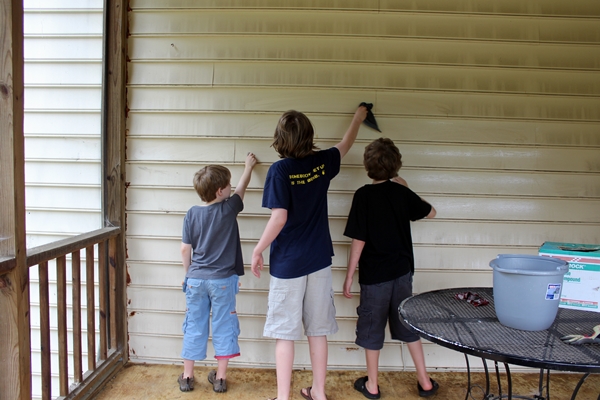 And I took a broom to all the cobwebs. And we did some general clearing out of the crap that's accumulated on the porch over time.

And now it's BEAUTIFUL! 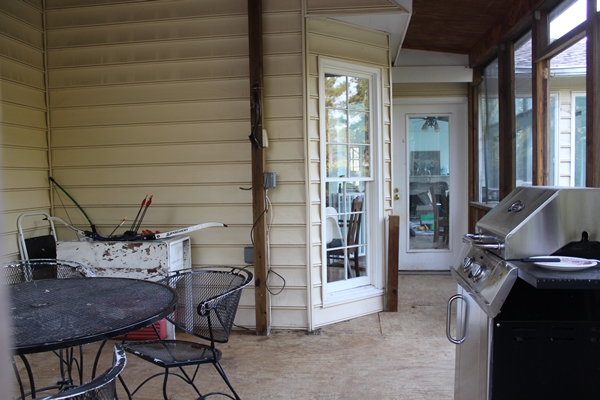 We have big plans out here that go beyond ripping up gross carpet. 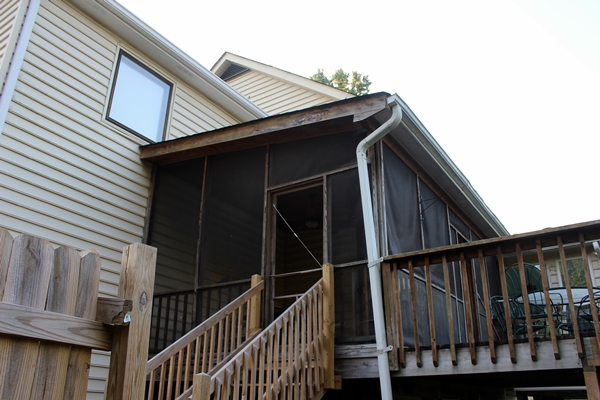 The deck part probably needs to be completely rebuilt, and I think we've decided it should not be rebuilt by us. So we're hoping we can afford to have that done sometime in the nearish future. There's kind of a weird gap right now where the deck ends a few feet away from the sunroom, so we'd like to extend it to close up that gap.

And then we're thinking we're probably going to take all the screens down, leaving a covered open air porch opening up onto the deck. Right now we have a little deck and a little sunroom; I think turning it into one unified space would be more practical. And with the sunroom right there, we don't feel an overwhelming need to also have a screened porch.

We think/hope that the screened porch is basically structurally sound, so we should be able to deal with fixing that part up mostly ourselves. Painting will be involved.

Going back to take another look at this picture:

....you can see what I was talking about when I fantasized about a kitchen remodel, only from the outside. See that bay window there? I want that gone, and to push the kitchen out to where the current edge of the porch is, on the right up there. So that one wall where the weird pole with wires and boxes on it is (I have no idea what all that mess is) would extend out and would have a door leading in to the newly expanded kitchen in the corner. And then the new exterior wall would look out on the deck and have a couple of big windows. I should make an actual diagram of all this at some point. Picture's worth a thousand words and all that.

Anyway. It's a humble start to the big porch redo, but having that nasty carpet gone is immensely satisfying.
Posted by Gretchen at 7:00 AM

Email ThisBlogThis!Share to TwitterShare to FacebookShare to Pinterest
Labels: deck, outside, porch