First a few notes:
*The Advent calendar continues to be a hit. Today we're making giant paper snowflakes.
*I think I need a totally non-fun version of the calendar for me. It would say things like, "mail the property tax check before you have to pay a penalty, you dummy!" "do some laundry," and "get to work on those photo books; it's almost Christmas!" Sigh.

We had big plans to paint last weekend, but then there was that whole hurt back/Christmas Carol/house guests thing. So we did...nothing instead. With the nursery, anyway. I am starting to get panicky again, but Dave has a 2 week vacation coming up, so we really ought to be able to knock everything out then.

The list:
1. hang curtain room divider
2. get everything out of there that doesn't belong in there
3. sort through diapers (yay! did it yesterday!)
4. finishing framing and hanging pictures
5. paint! (paint--Benjamin Moore's Newburg Green--is already purchased)
6. install board and batten
7. refinish the other dresser once it gets here
8. make a whale
9. finish washing, sorting, putting away clothes
10. hang light fixture
11. find a lamp or two
12. paint bookshelf
13. adorable accessories
14. make a mobile?
15. put crib together
16. buy changing pad thing for dresser #2
17. find curtains

A lot of the things will lead to their very own blog entries, but a few explanatory notes in the meantime....

I mentioned our childless trip to Ikea awhile back, which was mostly for nursery stuff. We were there at the tail end of their Black Friday sales, and all the plush toys were half off. Normally this would be of only slight interest to me, except that we discovered that Ikea is currently embracing sea animals in the same way we are! What luck! So we picked up this guy:

And these ocean friends:

There's also, I just discovered on the website, a shark. But we didn't see him. And sharks are a little scary for a nursery anyway.

A good portion of our Ikea time was spent staring helplessly at the overwhelming Kvartal curtain system display. More on that later, but we did not purchase any Kvartal components in the end. We bought other things. And we're still not sure how that's all going to work out.

We also went ahead and bought a rocking chair. I wanted something a little more exciting and original than the Poang rocker, but....well, it was there, and it was not too expensive, and it was comfy when I sat in it. This is the one we got:

And then there is this pillow. We actually bought the same pillow a few months ago, then returned it when we were leaning toward woodland animals instead of sea creatures. So we bought it again, and this time I'm keeping it: What else? Oh, perhaps "make a whale" requires a little more explanation. I have a good number of smallish framed things in mind for the walls, but I wanted something big and exciting, too. I kept looking at this map:

It has sea monsters, you see! But the sizes available all seem to be really wacky and irregular and I could never figure out how I'd manage to get it framed without spending a fortune. So I finally moved on.

Last night I came across a really cool wooden whale cutout for sale on Etsy....for $89. And then I thought that it didn't look like it'd be TOO tricky to make ourselves. I can sketch it, Dave can break out his jigsaw, then I can paint it. I think. I found a blog that confirmed that I should be able to do this on my own (though it was a little sparse on details). So, like this, only bigger. BIGGER! 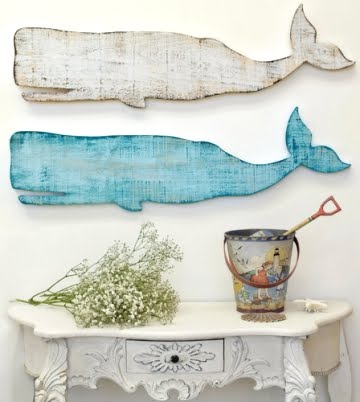 Do you want to know something? Trying to get a blog entry written while simultaneously doing school with children is a little more multi-tasking than I can handle. So I will stop now!
Posted by Gretchen at 2:07 PM

Email ThisBlogThis!Share to TwitterShare to FacebookShare to Pinterest
Labels: nursery, shopping, the house