Looking forward: I want this wallpaper!

I have a lot of nursery things that I'm almost ready to post about. Maybe, if someone hadn't put his Math Olympiad books right on top of my special scissors and double sided tape and ribbon in the buffet, so that I had to spend forever looking for them, I would even be ready for one of those posts right now. But no.

So for now I'll just stop in briefly to share what I wasted some time doing this weekend. Which is looking at wallpaper. Remember my giant fireplace? 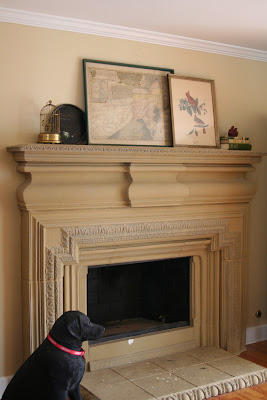 I have long wanted a wall somewhere in the house with fabulous wallpaper. Just a little wallpaper. So I got to thinking that the wall with the fireplace on it might be perfect. If that fireplace isn't begging to be part of an accent wall....then I don't know what else it could possibly be saying. "Look at me! Look at me!" seems to pretty well sum it up.

Here's the thing about my den. It has giant brown couches in it. And right now everything in there is brown and green and red and doesn't flow well into the library with its blues and grays at all. Then my mom got a new sofa and gave us her old sofa. Only it's still brown. It's brown leather, and it's not in super terrific shape, so I'm not sure how long it will stick around, either. If I were rich, I would go out tomorrow and buy a big gray sectional, with a nice low profile, so it wouldn't cut off the flow from the library, but would still have plenty of seating for everyone. But...I'm not.

So I get all confused whenever I think about the den, because I want it to work with the brown couch now, but be able to someday morph into a room with a gray couch, and also flow well with the cooler colors in the adjacent room right now. Still with me?

Anyway, I decided I love this wallpaper, and I am trying to think if the colors in it can do what I need them to do:

It's called Squirrel & Dove, even though I have never seen a squirrel with ears like that. Maybe that is what English squirrel ears look like.

Certainly this will work with the brown couch, but what about bringing gray in? I can't decide if those branches are a gray-y enough brown. Because I want to paint the fireplace gray, I think. It gives me a headache to think about. I like the idea of bringing in teal and red, too, though. Because my other idea was MORE BLUE. And I am in danger of having an entirely blue house if I'm not careful.

Also, there is the issue of the other walls. I spend a lot of time squinting at various shades of taupe on my computer screen, looking for one with just enough gray in it.

Sigh. I don't know. Maybe I need to keep up the wallpaper hunt and find something grayer. What say you all?

And now back to the nursery!
Posted by Gretchen at 8:33 PM