Our master bedroom needs a lot of help.

I am going to post, probably tomorrow, after I get around to making the bed and straightening up just a little, a shameful before picture of our master bedroom, aka the room where we dump all the stuff we can't figure out another place to put. Because it's really time to get moving on that.

As I've mentioned, the giant (29 feet long, the whole width of the house) master bedroom is going to double as a nursery for the time being. Our old plan, until yesterday-ish, was to have a wall with french doors put up to section off a small, nursery-size area. Then we started to run out of time (and money; I just paid our new, more expensive house and more expensive county property taxes. Ouch. Although people in many states would laugh if I revealed what we in Georgia consider ouch-worthy when it comes to property taxes), so I got to thinking the other night that we might be better off with a more temporary solution.

New plan! A railing along the ceiling to hold a curtain as a room divider and a long term plan to move baby into the now guest room sooner than we previously expected and to finish the basement (with guest room/bath and a big rec room to send loud children to) as soon as we can afford it.

This means I'll be decorating my lovely nursery to use for all of maybe a year or so, but if I'm still totally in love with it, it will be easy to put some paint up in the guest room and move the whole thing over there when the time comes, then redecorate into a big kid room a couple of years down the road. It also means I probably won't be motivated to do a whole lot with the guest room in the meantime, but that's probably fine. I have plenty of rooms that need attention. We might slap a coat of paint up at some point since that only takes a few hours, and I was already thinking we'd probably go with something very neutral for bedding (like maybe all white, and then we can change things out with pillows).

So from here until January--all master bedroom/nursery all the time! Not really. We've got some library tweaking going on this weekend that I'll post about. And an Ikea trip yesterday yielded some stuff for both the kid rooms, so we'll be working on those. And then there's the nasty carpet/ugly paint in the master bath that must also be dealt with before January. And we keep meaning to have mulch delivered for out front and maybe get some berry bushes in so we'll have fruit next summer....But priority: master bedroom and nursery. And nasty carpet in bathroom.

Okay, so part 1: here's the mood board. Part 2 (tomorrowish) will be the shameful before picture and thoughts about what we'll be doing with all the stuff we already have. 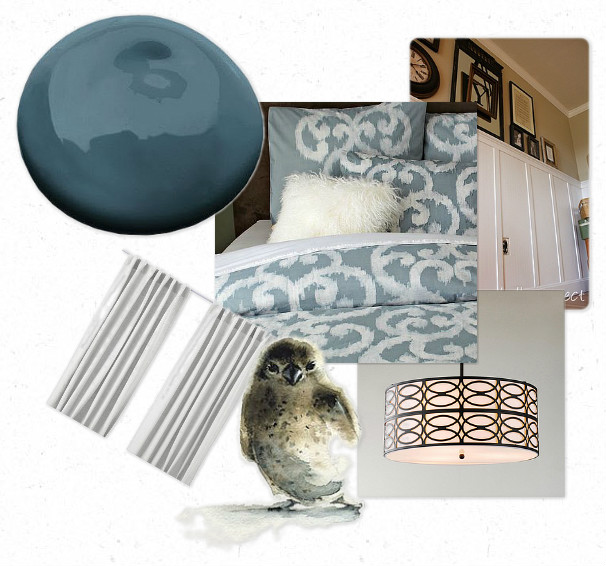 1. The oddly named Newburg Green from Benjamin Moore. I've yet to see a picture where this actually looks green, as opposed to blue with some gray in it. I've realized it's pretty close to the color already in Ari's room (which I haven't posted yet), but that's okay. The idea is to pick a color that will work for the nursery and also for the room as a whole. Color schemes will be similar, but I don't think I'm up for the splashes of orange on our half, so more blues and grays with lots of white and some black.

2. Ikat Scroll Duvet Cover from West Elm. They're calling this "dusty blue" on the website. It looks awfully blue-gray to me.

3. There are lots of board and batten tutorials online; this one is from My Blessed Life. Probably just one wall, but maybe we'll go crazy and do the whole room. I'm a little nervous that the Newburg Green is going to look too dark in that room (it has 4 windows, two facing east and two facing west, so it gets natural light all day, but it still seems kind of dark in there), and I've read that it does best with a lot of white and/or natural light, so I'm thinking this will make it work.

4. Aina linen curtains from Ikea. I like the look of the linen, but they have other white curtains that block more light and are cheaper, so we will probably wind up with those. But, anyway, a wall of white curtains on a Kvartal (say it; it's fun!) track across one side of the room. Another way to add brightness, too.

5. How about some bird art? This is from Amber Alexander's Etsy shop. He is very cute.

6. Black and white pendant light from Overstock. We have no overhead light at all in the room right now, just a cheap ceiling fan. I can't stand ceiling fans while I'm sleeping, so we're ripping that sucker out and putting up a light....maybe even this one.

Making decisions and ordering some stuff in the next few days, I think. Because, seriously....deadline looms!

Oh, by the way, this isn't the Kvartal track, but this is basically how I'm envisioning the room divider: kataydee.com
Posted by Gretchen at 5:13 PM