Back before I bailed on the old homeschool blog, I announced big plans for a post about all the not-at-our-house stuff we do this year. There is...a lot. Here's what that schedule looks like right now:

Monday: classes at LEO in the morning. Ari's taking a logic class, and Milo and Gus are taking science.

Tuesday: Spanish in the morning (tutor comes here to do a class with my kids plus our friends who live nearby). Milo and Gus have lego robotics at a friend's house in the afternoons. Every other week, Ari has physics at LEO. Gus has tap from 4-5. And until next month, Gus has rehearsals for A Christmas Carol (he's Tiny Tim!) in the evenings. Tuesdays are....busy.

Wednesday: Ari has a Manga class in the afternoon, and the other boys hang out at the playground with friends while that's going on. Fiesta has obedience class in the evenings, and a kid generally comes with me to that.

Thursday: Milo and Gus have a boy's club they go to every other week. Milo has guitar in the late afternoons. Gus has rehearsal again. And Ari is blissfully unscheduled all day!

Friday: a bit in flux right now. We often get together with friends.

Saturday: Ari and Milo have archery practice in the mornings, although that's about to go on hiatus until after New Year's.

Sunday: Gus has rehearsal in the afternoon, and Ari has math club (at our house, coached by Dave).

Phew! Uhh....it makes appreciate our time at home more? Well, it does. I know that it is fashionable to wax philosophical about whether kids are overscheduled these days and should be spending more time building fairy houses in the woods instead and all that. This is just sort of how our year has shaped up, free of philosophy-based planning. The kids seem completely fine with it; I would like more of our evenings back....but I'm the one who went and scheduled Fiesta's obedience class smack in between Christmas Carol rehearsals.

August's theater career takes up more of the week than anything else, and he's our token extrovert, so he handles it well. He did a drama camp the summer he was five and fell completely in love with acting. So he's been involved in one play or another more often than not since then.

A Christmas Carol is the first play he's done that's not strictly children's theater. The cast is a mix of kids and adults, and he's the youngest one (though not the smallest; he makes for a rather tall Tiny Tim). He did another wintry-themed play last year at the same time, and I'm kind of loving how going to see Gus in a seasonal play is becoming a thing we do for Christmas. A Christmas Carol opens the day after Thanksgiving this year, so Dave's parents will be in town and able to see him on stage for the first time.

Here are some cruddy iphone pictures from the day they took publicity photos (hoping I'll be able to get some copies of the ones that were taken with a real camera and from a better angle).

With the carollers (he's on the front row, second from the right): 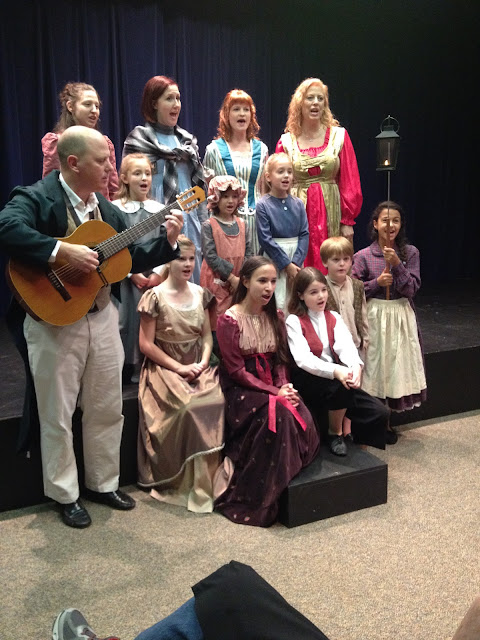 And with the whole cast (bottom right) (with the photographer's arm in the foreground): 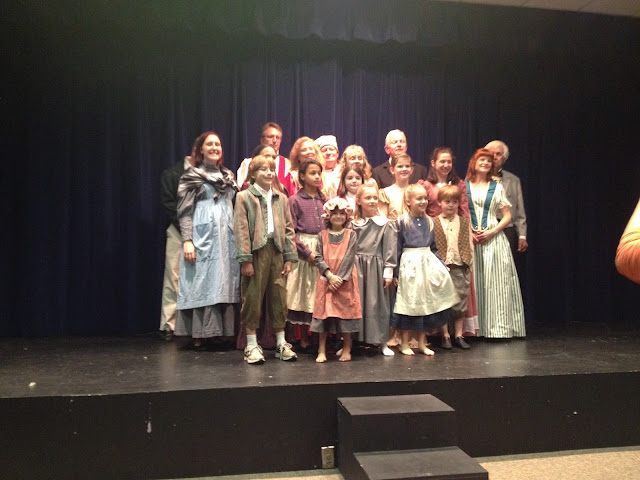