Dresser Vignette, Heavy on the Vintage 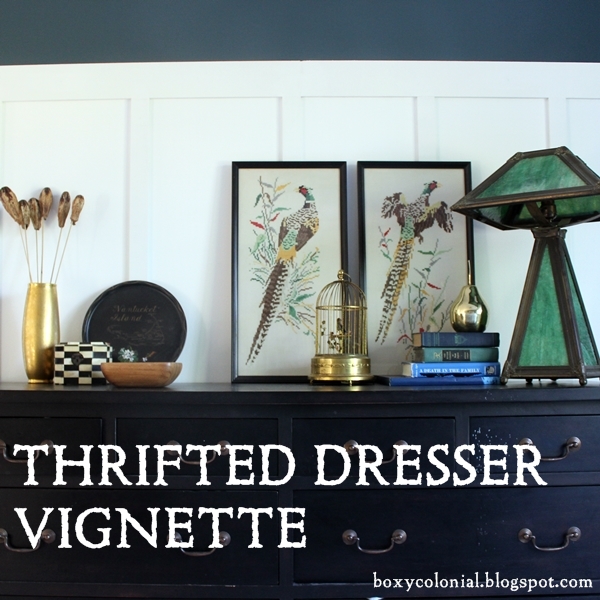 So after yesterday's dramatic fail, I thought maybe I'd post about something that just involves moving already created stuff around the house, so that I could only screw it up by making it look ugly. Nothing could be destroyed in the process unless I just dropped it and broke it (or unless I decided to smear Mod Podge all over it for some reason. But neither of those things happened).

Mostly when I try to "style" stuff, it either comes out looking pretty spartan: 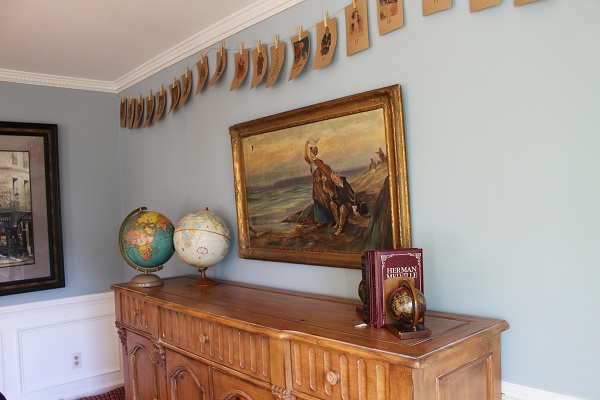 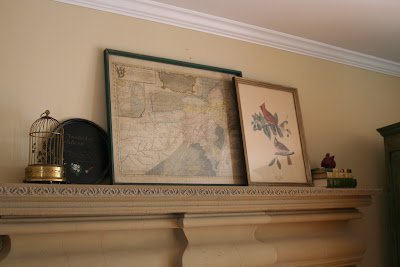 I've always known I'd have to conquer the very long dresser in our bedroom at some point, but I wasn't really planning to do it so soon. But then two things happened:

Caitlin from Desert Domicile posted about her fabulous floating shelves and helpfully gave a list of tips on styling: 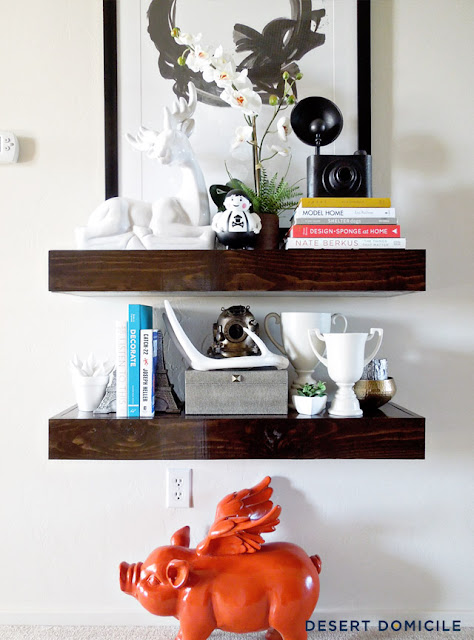 And then also....okay, yeah, I have just completely blanked on the second thing. But whatever it was, it happened, and it made me want to make a vignette on my dresser.

Much like in that paragraph right up there, I probably spaced out and neglected some of the ten tips Caitlin provides. But I took number 10: "practice, practice, practice" to heart. I am not a confident vignette-r, but I'll never get better if I don't try, right? Probably so.

Also, making a vignette on my dresser means I get to use the only white wall in my house, the board and batten, as a backdrop.

I dragged a bunch of stuff from around the house and basement up to the bedroom, played around for awhile, and ended up here: 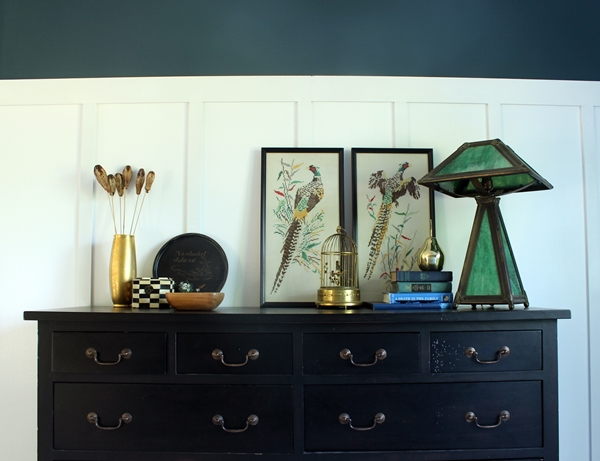 The only thing I bought specifically for the dresser is those mahogany stems sticking out of the gold vase. I need something tallish in there, so I picked them up at Hobby Lobby today (then I had to google to see if I'm destroying the rain forest by having them. I don't seem to be. As far as I can tell. I wanted cotton balls on a stem, but they didn't have any. I think the dresser is made out of rain forest destroying mahogany anyway. Sorry, rain forest). 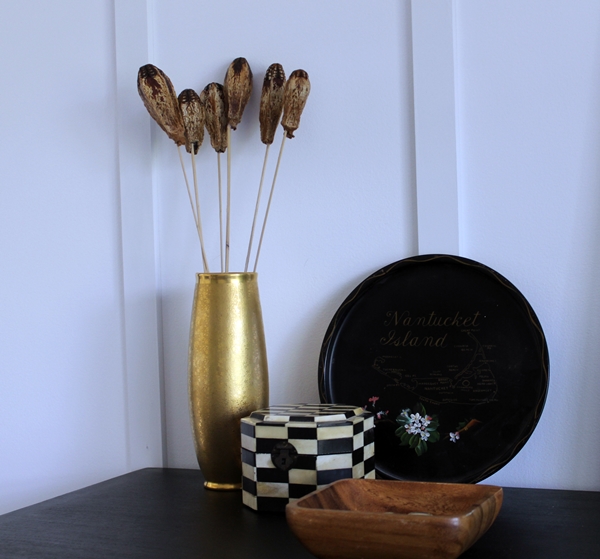 Mahogany stems in a gold vase. The gold vase and the wooden bowl came from thrift stores recently. My mom gave me the Nantucket tray (we went to Nantucket on our honeymoon) a long time ago, and I picked up the little black and white box at a yard sale a similarly long time ago. 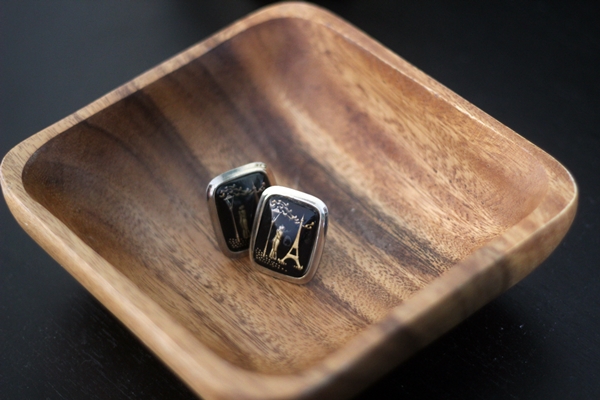 I envision this bowl becoming a repository for a bunch of crap in the future, but for now it's holding the cuff links I bought on ebay for Dave to wear at our wedding. Aww! 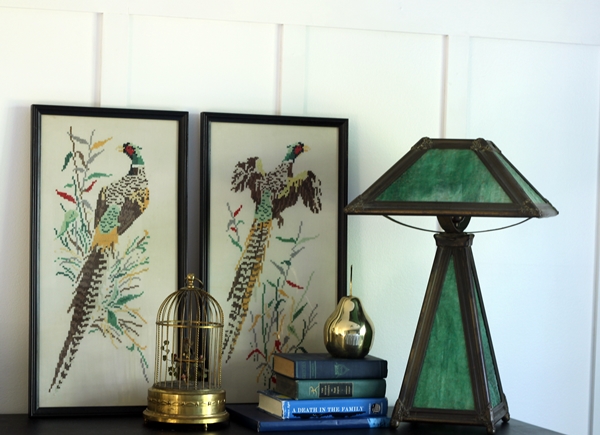 Those are my cross-stitched pheasants from Goodwill that used to be in my den. My mom gave me the lamp. And the animatronic bird. I really need to post a video of the bird in action; it's enchanting. But for today, I just took a picture of it so that you can see how dusty it is. It's hard to dust inside its cage: 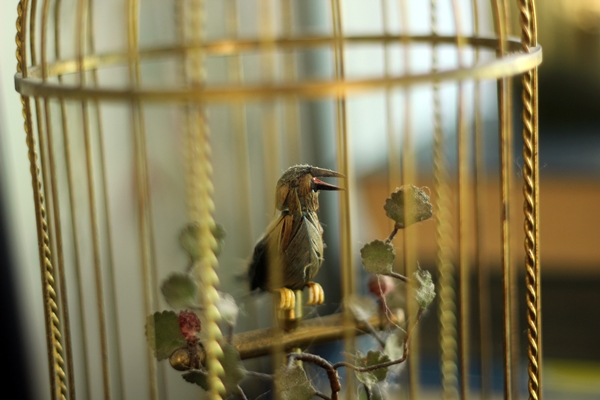 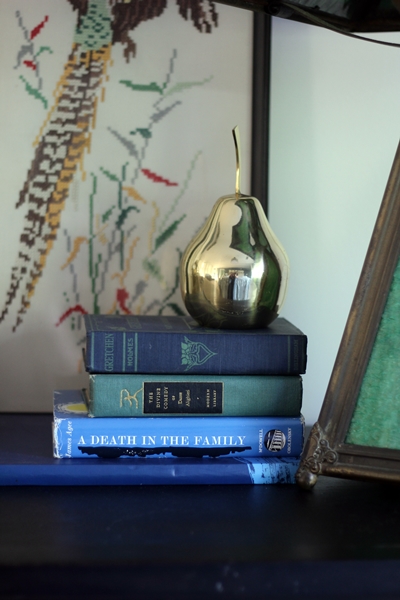 Obligatory stack of books. Look, that top one is named ME! I haven't read it. My mom gave me that, too, because it has my name. I have read A Death in the Family and at least parts of The Divine Comedy, though. And the bottom book is Margaret Atwood poetry and the only thing on the dresser purchased new. I just bought the pear at the thrift store the other day, and I'm sort of in love with it.

Self portrait in pear: 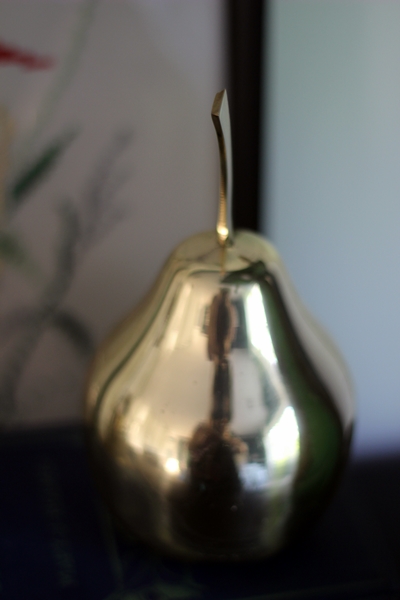 And there it is! I call it Vignette: A First Attempt with Pear

Linking with:
Stone Gable's Tutorials, Tips, and Tidbits
Hookin' Up with House of Hepworths
Craftionary's Friday Link Party
Inspiration Gallery
The Shabby Nest's Frugal Friday
Classy Clutter's Spotlight Saturday
Tatertots and Jello's Weekend Wrap Up
Sundae Scoop Link Party
Monday Funday
Give Me the Goods
Tutorials and Tips at Home Stories A to Z
Posted by Gretchen at 7:30 AM