This is not just a DIY fail. It is a DIY fail nearly fifteen years in the making.

Let me back up.

Nearly fifteen years ago, Dave and I moved to Boston (well, Somerville). Dave had just graduated from Oberlin, and I was a year out of UGA. He was headed for an internship at the Museum of Science (that would lead to a full time job) and I was about to start an English Ph.d. program at Brandeis (that would lead to me quitting when Ari was born). We were young; we were full of dreams.....like the dream of finding an apartment we could afford that would take dogs.

Once we secured said apartment (we walked into the rental agency with dog in tow, and the woman said, "where do you want to live? ANYWHERE with a dog, right?" ....which was sort of the perfect introduction to Boston in a couple of ways...we took the one apartment in the greater Boston area in our price range that allowed a dog), we did some touristy things. Like visiting Paul Revere's house and the Old North Church.

None of this really matters, except that, since I don't have a successful project to show you, I might as well tell a story. And also because the Old North Church's gift shop is where we bought a reproduction of an old map of/aerial view of Boston. I don't know why. Apparently our younger selves didn't know why either, because it stayed just how we bought it, rolled up in a tube, for nearly fifteen years.

A couple of years ago we found it somewhere or other and moved it into Ari's room at our old house, thinking we'd frame it and hang it up in there. And then it sat in the tube for awhile longer.

Then we started redoing Ari's room here, and the map of Boston still seemed like it would be a good fit. And Ari was born in Boston and all, so, you know....perfect!

Instead of buying an expensive frame for it, I had a brilliant plan. We would cut down some wood (I can't remember what they called the stuff we wound up with at Home Depot--craft board? project board? It was cheaper than plywood but more amenable to painting than MDF) to the size of the map and then the map and the board would become one with the help of some spray adhesive and Mod Podge.

Things started out just fine. I painted the edge of the board with some of the red paint left over from Ari's subway dresser (Boston HAS a subway! How fitting!): 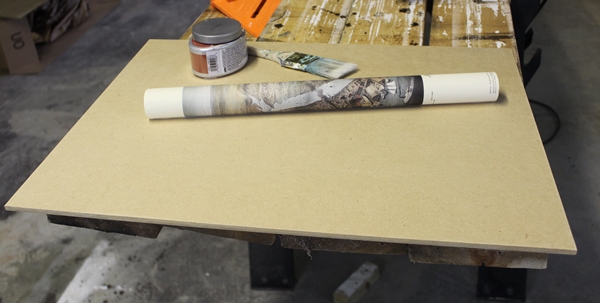 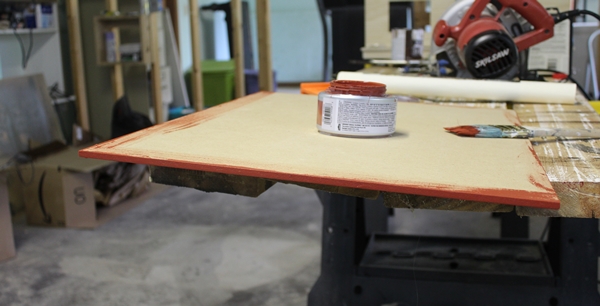 I let the paint dry overnight, then Dave and I went down to consider how to proceed. Since the poster had been rolled up for more than a decade, we decided to weigh it down for awhile before gluing it. Dave was very skeptical at this point about our ability to get the map lined up right on the board. I, however, was confident. Yes. Confident. 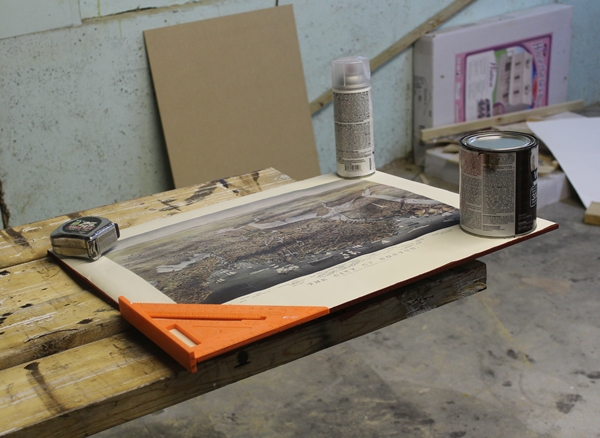 We came back down a couple of hours later (AKA the next time Abe took a nap) and started gluing. First Dave sprayed on a strip at one edge and I got that side pasted down. Then he sprayed the rest and we slowly pressed it down all the way across.

And now I was feeling triumphant, because it looked AWESOME: 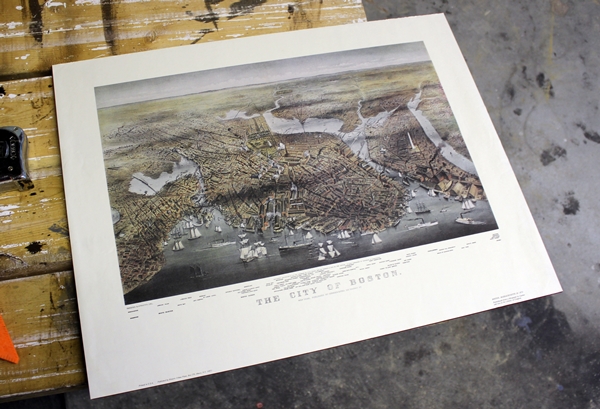 Look at that! No wrinkles! Lined up perfectly! It looked GREAT!

I was feeling pretty full of myself at this point. I was right, and Dave was wrong. THIS was going to be the project that finally got me on Craftgawker (oh, yeah, and it was going to look nice in Ari's room). The red edge was subtle yet the perfect touch:

I went upstairs to bask in my own awesomeness for awhile and let the adhesive dry.

Then I came back down and confidently started to put the Mod Podge on the top. Umm.

It was not good. It immediately started wrinkling and  bubbling and coming up from the board. I frantically grabbed whatever I could find with a straight edge and tried to straighten it out and get it to stick again. No use. I went back upstairs and hoped everything would look better when it dried. No: 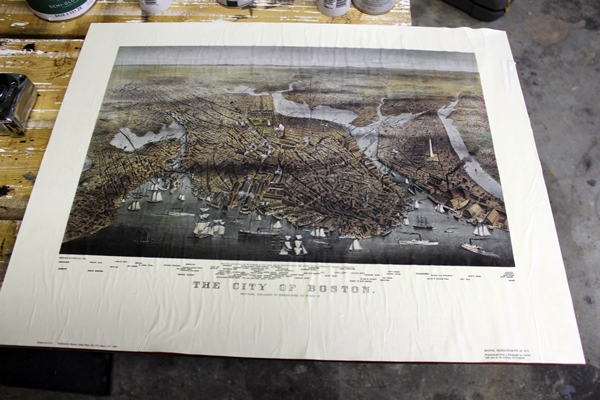 Sigh. Looking at the pictures kind of breaks my heart. I'm very sorry, Map of Boston (and Ari).

Where did I go wrong? My best guess is with the spray adhesive step. It all seemed perfect at the time, but, in retrospect, I guess we should have used more of the stuff, given how readily it started to peel off as soon as something wet touched it. Or maybe it would have been okay if I'd waited longer to Mod Podge it.

I'm not sure if I'm ready to give up yet. I mean, I have to give up on THAT map. But we have more of the board left; I might just have to buy or print a map of Boston and give it another shot.

So there you have it. Failure! Tomorrow (or so) I'll be back with another, less disastrous weekend project to tell you about.
Posted by Gretchen at 7:30 AM