Saturday we did all our our Easter prep work. Like the egg dyeing. And my trip to Target to get the last minute egg dyeing kit. Some time last week I thought maybe I was going to find some amazing homemade egg dye recipe to make with the kids. Then I looked up recipes, and the first one I read started with, "take a pound of blueberries...." And then I decided I'd just get the $1.50 kit from Target instead of spending several times that on a pound of blueberries that we wouldn't even get to eat (and that just for the BLUE eggs).

So, much like with blueberries, I can't stand the thought of wasting eggs just to make them look pretty. Partially because we buy expensive happy eggs because we used to have chickens, and I love chickens, and I don't want the ones who lay our eggs to be sad. And Dave's the only one here who much cares for hard-boiled eggs. All of this to say....I only let the kids dye six eggs. Two eggs each! This is going to be one of the stories they tell about me when they grow up to demonstrate how crazy their mother is. Or how much she loves chickens. Same thing, pretty much.

Anyway, here they are, decorating their stingy allowance of eggs. The cheap egg dyeing kit came with a "magic crayon" so that one can draw designs on the egg that the dye won't cover up. 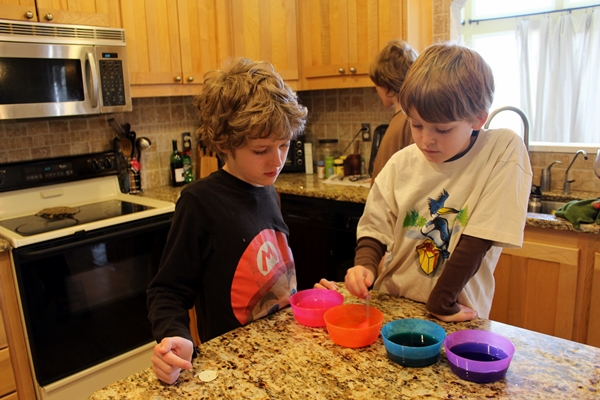 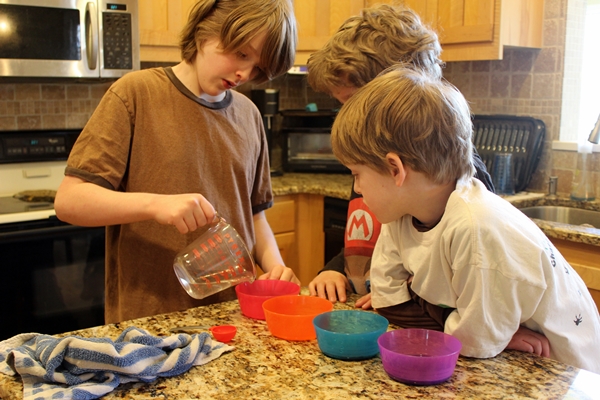 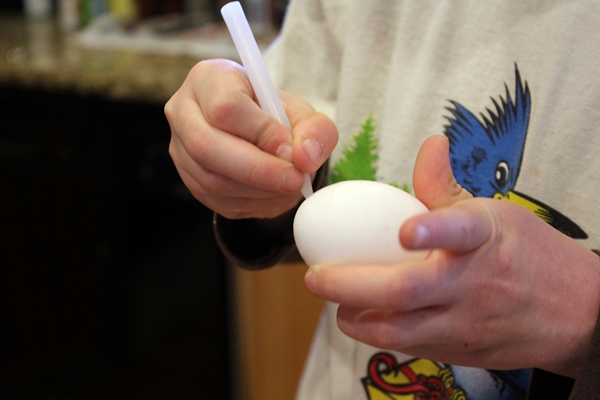 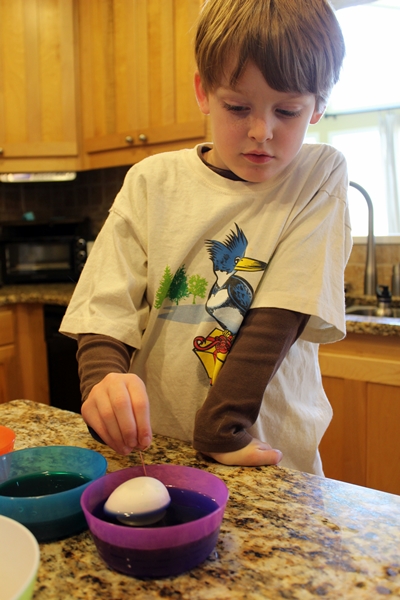 I appreciated how pretty the eggs looked being dyed in our Ikea bowls. Although I realized too late they were too shallow for submerged eggs. But we turned them around after a few minutes (or transferred them to a different color), and that all worked out fine. 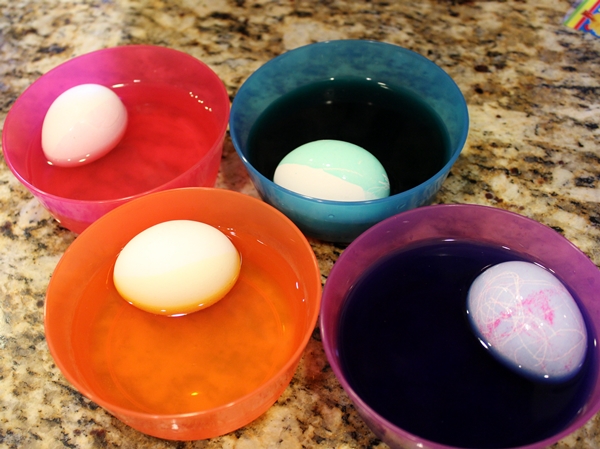 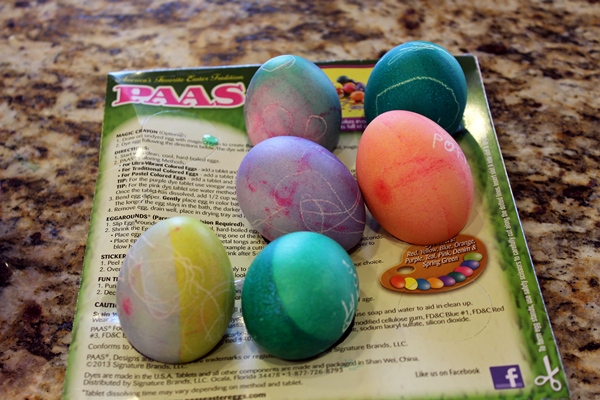 Next, we moved on filling up eggs for the next day's egg hunt at my grandparents' house: 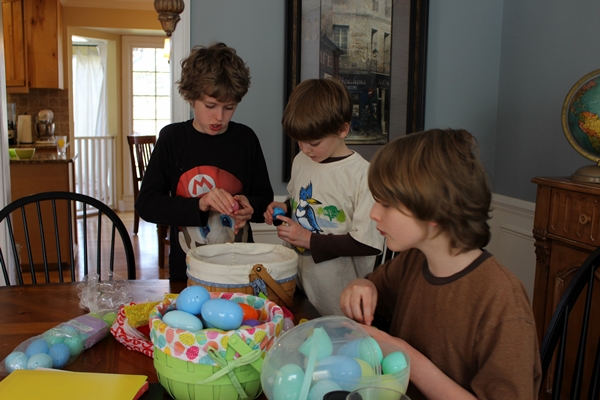 Abe sat around having really pretty blue eyes while this was going on: 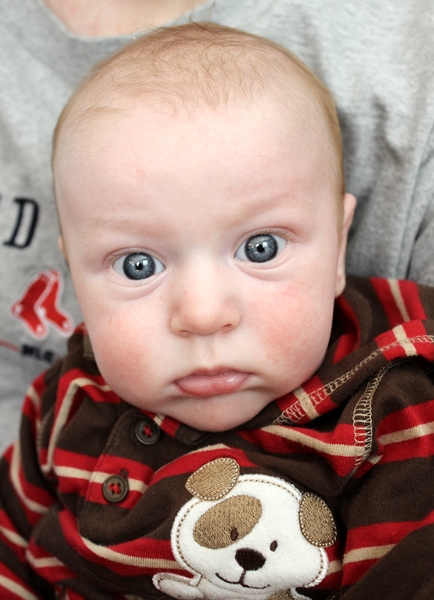 For our final Saturday task, we made bunny racecars!

I found this idea for bunny race cars made out of Reese's eggs at Kitchen Fun with My Three Sons, and I knew I had to make them. Because look at them! Annie's even makes gluten-free bunny cookies. Let me tell you, never will you get so much credit for doing so little as when you make Reese's egg bunny race cars. People love these. They love them on facebook and then they love them at Easter dinner at your grandparents'. But they are SUPER easy. No cooking; you just have to stick them together. The hardest part is cutting out the little slots for the bunnies without cracking the eggs too much.

We put out the Easter baskets after the kids went to bed. I'm nearly as stingy with Easter baskets as with eggs. Apparently, at some point since I was a kid, Easter has turned into this sort of Christmas-like event wherein you receive actual presents instead of just chocolate bunnies. But here we do a book and a chocolate bunny. Unless I don't make it to Target until the day before Easter, which is usually, and all the good bunnies are gone (they did have some horrifying "gummy bunnies" but I passed on those). Then they get a random assortment of what's left at Target. Like Peeps and Cadbury cream eggs. But I did  order the books from Amazon DAYS ago instead of just getting whatever they had in the measly Target book section like I usually do. These books are award winners! 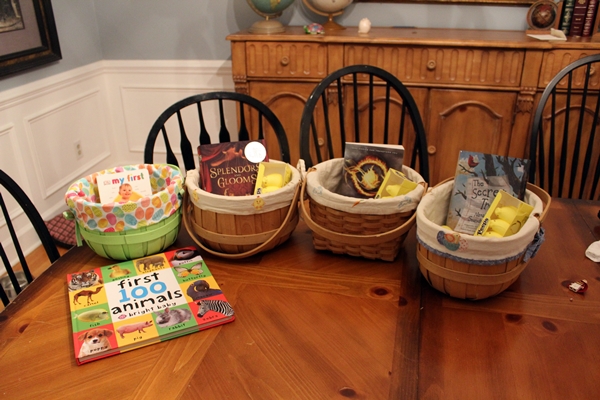 Oh, Abe can't eat candy, so he got two books. One of them was too big for his basket (also purchased at Target on Saturday. I was pleased to see that they're still selling wooden baskets with cloth liners, so that his can coordinate with his big brothers').

Sunday morning we....tried to go to church. Really, we did! We're between churches at the moment, and Ari had expressed some curiosity about the Catholic church that is in our backyard (well, it's right behind our backyard, anyway). It's the church I went to as a kid, actually, and that my grandparents (not the egg hunt grandparents, though) went to for a very long time. So, even though I'm not Catholic anymore, we thought it might be nice to go over there, have the kids see the church I went to when I was young, and, in the bargain, not have to deal with Easter church traffic, since we could walk there. Plus it would be kind of lame to show up for the first time at a church you might actually go to long term on Easter.

We got there a good 20 minutes before the 11 o'clock mass started and.....yeah. It was completely packed. Completely. So, we walked back home, feeling kind of sheepish. But I did take this nice picture of the kids dressed up: 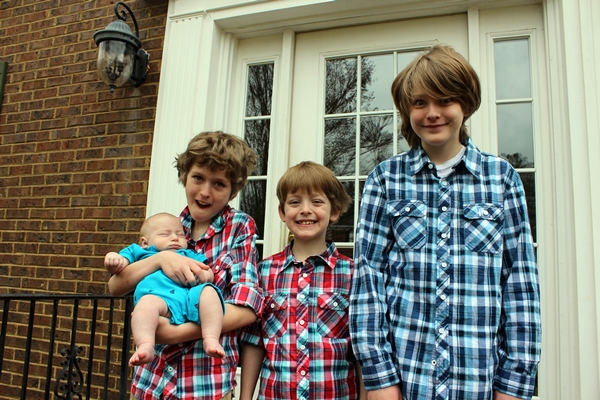 Too bad they didn't have a plaid shirt in Abe's size. But the plaid shirts have sort of that same aqua color in them, so it all kind of works. Ari didn't want to match. But he didn't mind coordinating.

And then to my grandparents' house to visit with extended family and have (in between rain showers) an egg hunt. I am not thrilled with my egg hunt pictures for the most part (the kids kept moving). But here's what I've got: 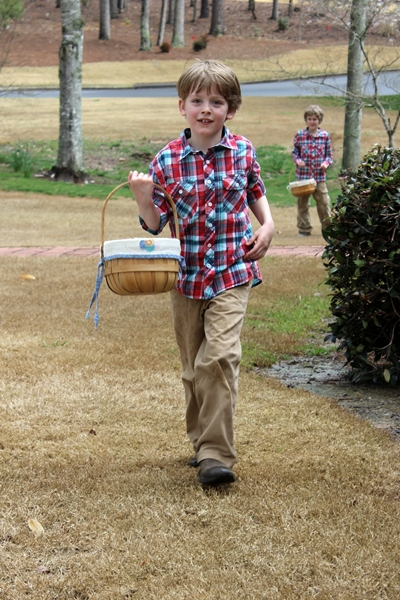 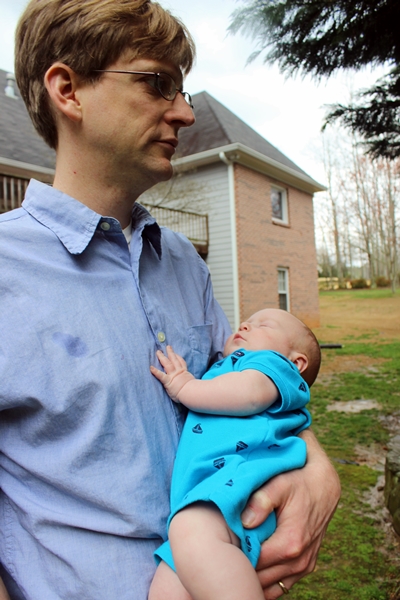 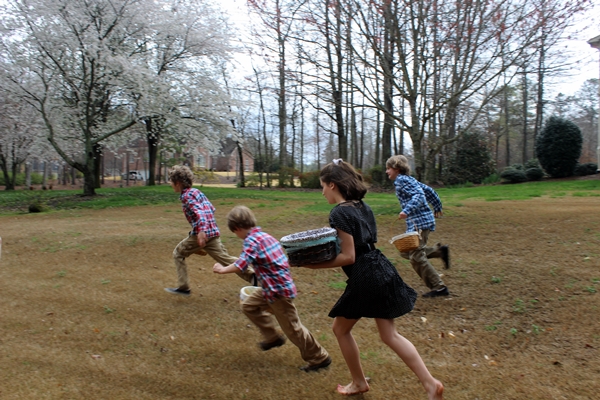 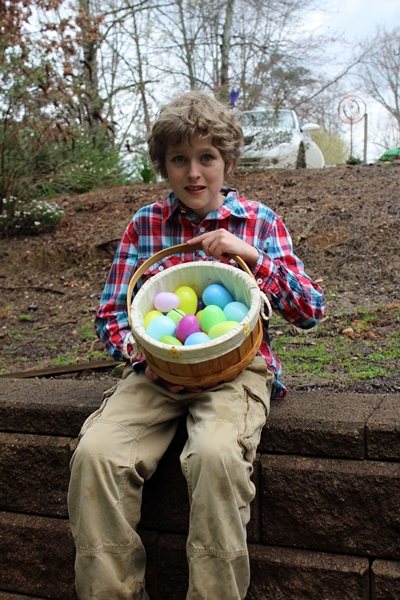 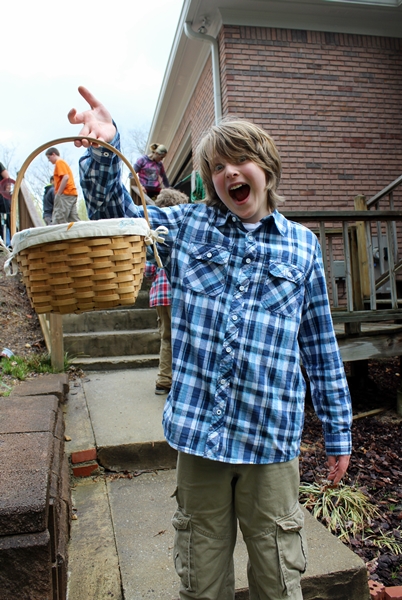 So there you have it.

We spent today working on big spring break project #1. And we're not finished yet. But tomorrow we're changing gears and working on big project #2 some. So who knows when I'll actually get to post about said projects. Hoping to get to a couple of smaller projects, too, though!