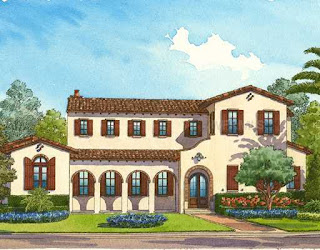 That's right--if you have at least $1.6 million to spend, you can live AT Disney World. A shuttle will pick you up at your front door and drive you to the parks whenever you want. You never have to leave Disney....EVER!  I'm going to start saving my pennies. Although I'm not sure we'd really fit in so much.

Okay, anyway, I'm not really ever going to have $1.6 million to spend on a house, and Georgia's already hot enough for me. But I do love Disney World. So much.

I went a couple of times as a kid, and Dave went once, for one day, but my Disney obsessiveness is largely something I've developed as an adult. The first time we went, the kids were 5, 3, and 9 months old: 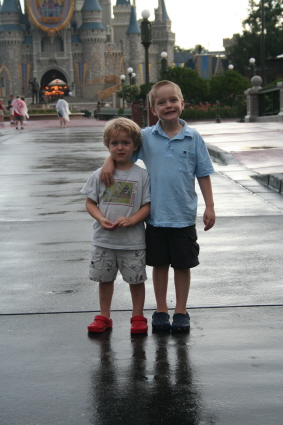 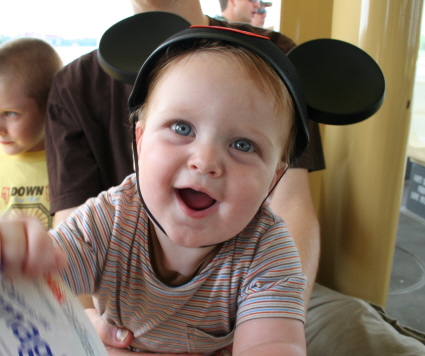 Then we just sort of kept going. At Dave's old school, they had this awesome September break that no one else had, so we could go when it was (incredibly hot and) uncrowded. We did take one year off to meet up with Dave's parents and sister (and sister's family) in DisneyLAND instead.

Our last trip was in September 2011. And then two terrible things happened. Not really terrible things, but terrible from a Disney trip perspective. Dave got a new job, with a new county, with no September break. And I got pregnant. You can't ride Tower of Terror when you're pregnant (side note: I went to Dollywood while pregnant, and you can't ride ANYTHING there. Like, not even the carousel. At least according the sign. Don't go to Dollywood pregnant. BORING). But mostly it was the job thing. I would go to Disney pregnant but I wouldn't go (with three kids) without Dave. Well, I might. But I'd rather not.

So we didn't get to take our September 2012 trip. We are now part of the sad mass that can only take trips during regular school vacation times. This is kind of a bummer, but we're going to work with it as well as we can, and we have a trip planned for the end of May, as soon as Dave is finished for the year.

One of the very saddest things about a May Disney trip instead of a September Disney trip is no free dining. For the past several years, Disney has offered the Dining plan for free when you buy a hotel/ticket package for the fall. And we love free dining. Without free dining, I can't really find a way to justify the expense of staying on Disney property. We've stayed off property once before, and, well, I'll just go ahead and say, without irony, that it's not as magical.

But having a baby waking up all your other kids by crying in the middle of the night in the tiny hotel room you've stuffed yourselves into is not particularly magical, either, so, really, there are some reasons, no free dining aside, why staying somewhere with more space makes sense this year. So we've rented a house a couple of miles from Disney World with lots of room for everyone to spread out. It even allows pets, which will save us a gazillion dollars on boarding or a house sitter.

And we only have two dining reservations. If the food isn't free, we're not getting it! Well, as much. Also, there's that baby thing again. Abe will be 4 months old....so not old enough to eat solid food, but old enough to get pretty restless while we do. We're planning to cook at the rental house a lot and grab snacks instead of full meals while we're at the parks. All of this should make our vacation cheaper, but truth is....there's really no such thing as a cheap Disney vacation, at least not when you have 4 kids (although Abe doesn't count as a person yet for Disney purposes, so that's something).

Okay. So that's the rundown on our Disney as cheap as Disney gets vacation. I wanted this post to be more cohesive and organized and....helpful? But then I kept trying to write it and it kept mostly coming out all, "I LOVE DISNEY WORLD!" so.....there you have it. I am sure I will spew forth more of the same in the weeks to come. Maybe I'll post the cutest picture in the world of Gus with Winnie-the-Pooh last year. But for now, I'll leave you with my three favorite resources for Disney obsessing planning:

1. The Disboards: there is nothing you can even begin to think about having to do with Disney that the people here have not talked about for a good 30 pages. And if you have questions, you can ask them and a million (mostly) friendly people will show up to answer them. The people who run the boards have a weekly podcast, too, which I listen to religiously.

2. The Unofficial Guide: It is possible that I've purchased outdated copies of The Unofficial Guide just so I could read about what Disney World used to be like 10 or 15 years ago, before we started going. It's possible. I'm not saying it's likely. Anyway, it's my favorite guide book, hands down (and it's also possible I've read pretty much all of them).

There you go. That's it! That's all you need to plan your vacation way, way more than any vacation really ought to be planned!

(I promise we really are working on house projects. They are just....time intensive. I ask for your patience).

Editing to say: I reread this and realized that I can't count to three (I think originally I was going to break the Dis Unplugged podcast into a separate thing). But I'm leaving it there to demonstrate that Disney trips leave me so excited that I can't even count.
Posted by Gretchen at 10:55 PM

Email ThisBlogThis!Share to TwitterShare to FacebookShare to Pinterest
Labels: Disney