Dave Tells Us How to Build a Bench with Shoe Storage

Dave's on a roll with this whole writing posts thing! I'm pretty sure this post has the distinction of the most pictures of any post EVER! Pictures are helpful when you're trying to build stuff.

This project was pretty fun.  Since we have plans to build a farmhouse table for the kitchen some time (sooner rather than later, hopefully), this was a good warm-up project.  While I've built things out of wood before (fence, stairs, baby gate), this bench was the first piece of furniture I've ever done.  I really wanted this to look nice, even under close inspection, and I think I succeeded from certain specific angles. "We can just make sure that's the back" was something Gretchen told me maybe five times throughout the process.  I finally had to remind her that only one of the sides can be in the back ...

Gretchen got Ana White's book for Christmas: The Handbuilt Home: 34 Simple Stylish and Budget-Friendly Woodworking Projects for Every Room

...and we used the farmhouse bench (project #11) as a guide.  I had to modify the plans a bit to fit our needs, though.  Firstly, the bench in the book is 59.5" wide and the foyer wall is only 53.5" wide.  Secondly, the shelf under the bench in the book is narrower than the bench top.  This allows for a few inches of overhang on either side of the bench legs and room for some creativity in the trim.  Since our bench needed to be wide enough to hold four shoe baskets, I opted to eliminate the overhang, push the legs out to the full length of the bench top, and maximize shelf space.  Finally, I wasn't wild about the curly shape that was cut out at the bottom of the legs, so I changed it to be a simple triangle shape.  Added bonus, straight lines are easier to cut!

After reading through the plans in the book, I came up with the following diagram.  It's pretty rough and on a piece of old envelope (as is most everything else that I write), but it helped me come up with my cut list.  It is, obviously, not drawn to scale.  I didn't have enough envelope to make it long enough.  So before you ask, no, my bench is not 6 feet tall. 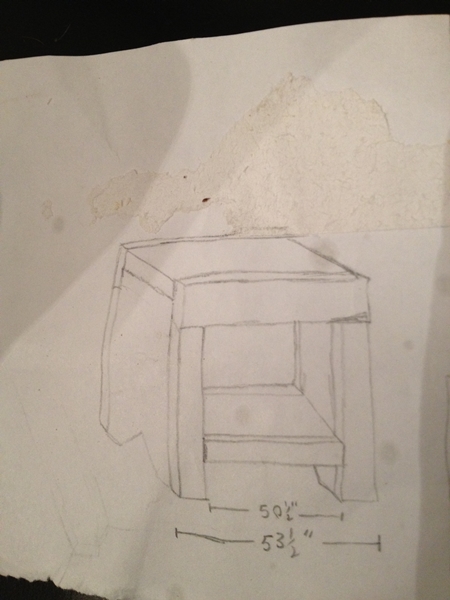 To the workbench!  Ari, my eldest son, was my helper on this project and took most of the pictures.  Here's me carrying the 1x12s to the basement. 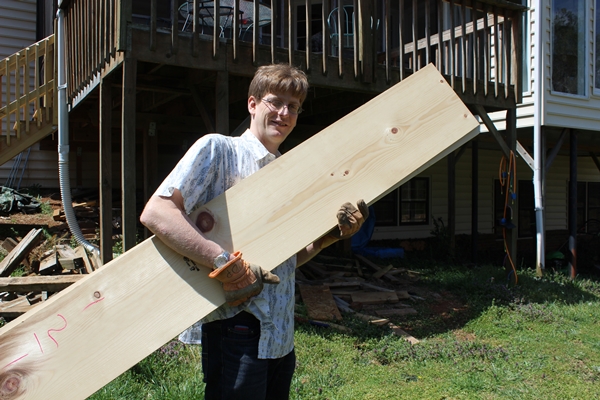 You've heard the saying "Measure twice, cut once"?  I'm more of a measure four times, cut once kind of guy. 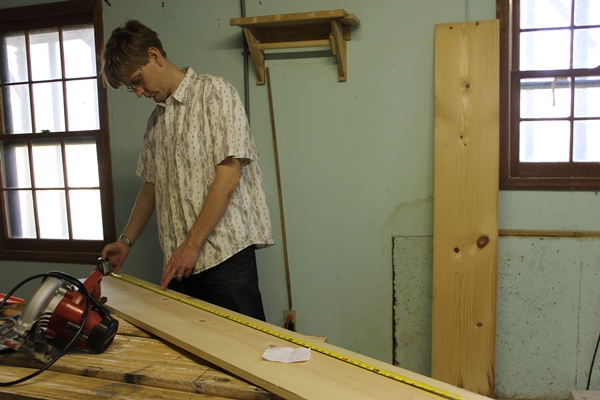 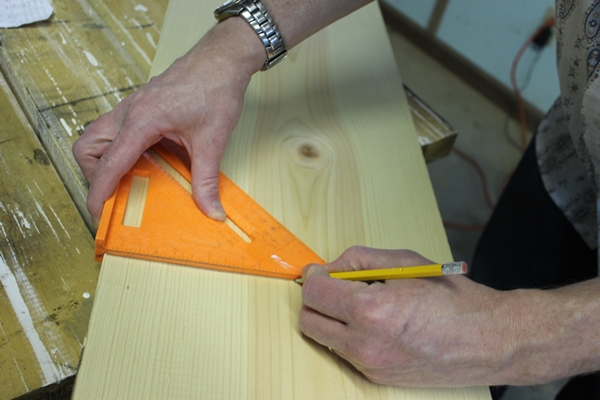 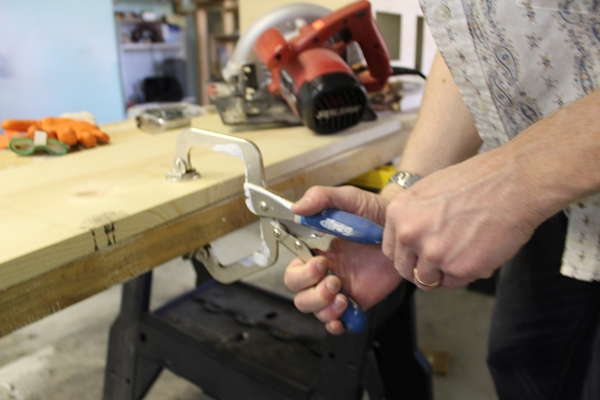 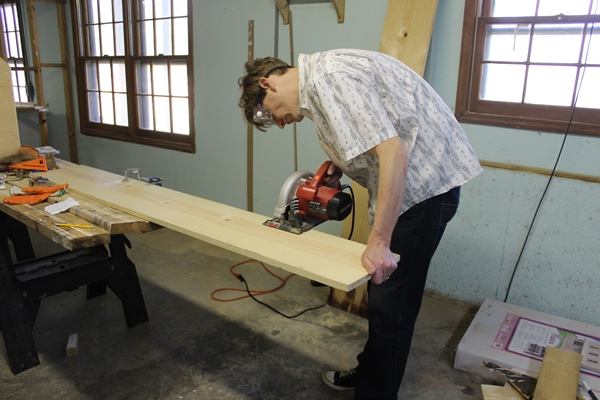 This project has taught me that it is nigh impossible to cut a straight line with a handheld saw.  A neighbor loaned me his miter saw when I was building the fence and I was really missing it here.  Eventually, I figured out a way to cut nice straight lines with a guide, but this poor bench got maybe two of these guided cuts.  Most of them are a little wobbly upon close inspection.  Learning experience!

(I just googled "cutting a straight line with a circular saw" and found that I'm not the first to discover the trick.  This video explains it pretty well.)

Here I am inspecting a wobbly cut.  I am displeased. 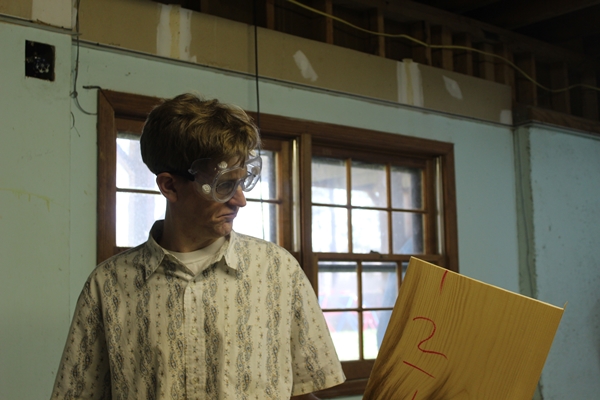 Another job Ari assigned himself during this project was to label each piece of wood I cut.  While it was a little silly, it was not entirely pointless.  I wasn't going to get these few pieces mixed up (only four 1x12 pieces on the first stage), but I can see this being a useful technique with more complicated projects. 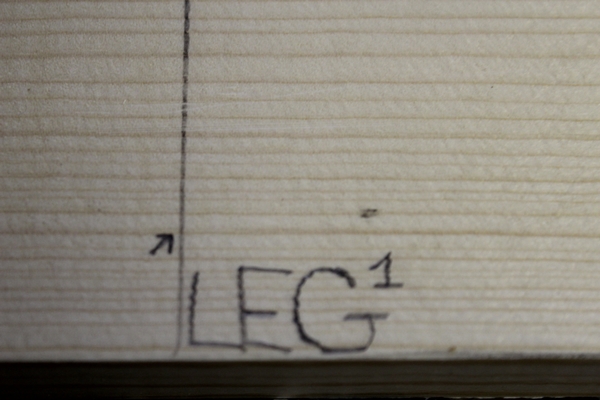 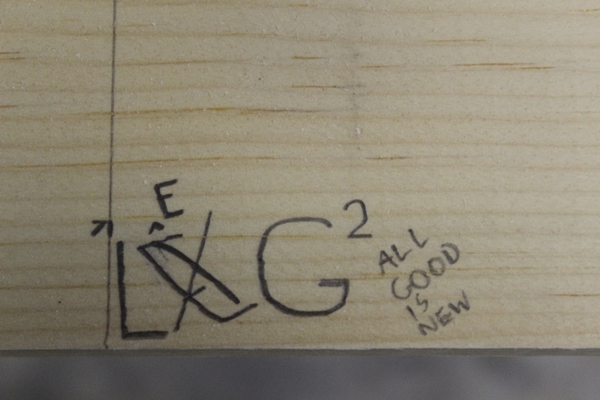 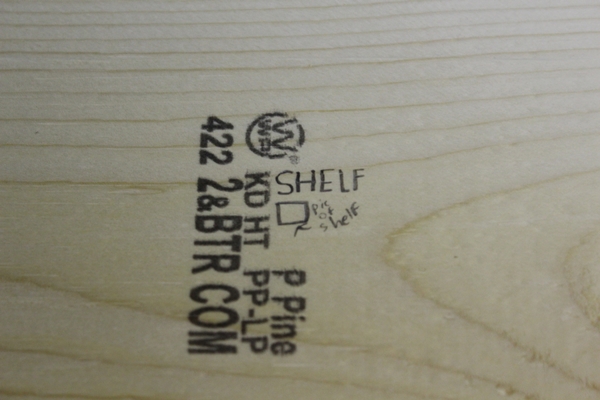 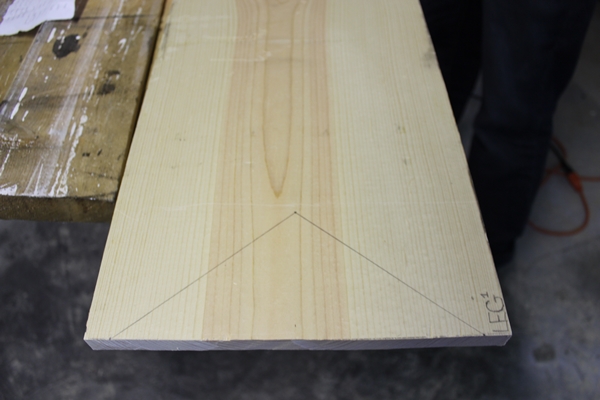 After cutting some wobbly lines with the circular saw, you'll see that the triangle is not detached yet. 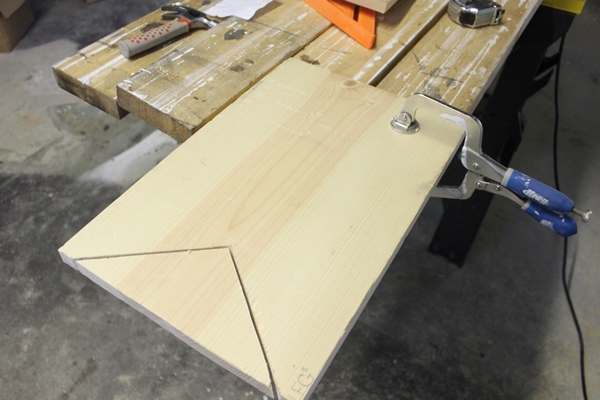 If I cut farther, the top of the cut would go into the leg.  Ugly!  Structurally unsound!  This is when the jigsaw comes in handy.  Apparently, Ari was off labeling pieces of wood when I was using the jigsaw, so you'll have to use your imagination.  Incidentally, I learned this technique when building the deck stairs last fall.  This guy talks about it at 7:55 if you want to see it done.

After the 1x12s were cut, we broke out the Kreg jig to get the pocket holes ready for some fine wood joinery.  Joinery is my new favorite word.  I had used my jig once before to build the very simple garden bed a few weeks back, just to get a feel for how it works, so we were ready to tackle the pocket holes on the bench. We made three holes spaced 4 inches apart per joint.  We used 1 1/4 inch screws, as suggested by Ana White.  (I actually tested a pocket hole joint with 1 1/2 inch screws on some scrap 1x4s and, sure enough, the tips of the screws poked out.  1 1/4 inch is the way to go when joining 1 by's at right angles with the Kreg jig.

Now would be a good time to mention that I held off on sanding the cut pieces of wood until the bench was assembled.  I say this now, because sanding at this stage would have been appropriate.  After the wood is joined, there are tough angles to reach with a sander.  So I wouldn't spend a ton of time getting everything super smooth before assembling, but a quick sanding the rougher parts would have made future sanding more efficient.

Unfortunately, Ari did the drilling.  This meant that he was not available for the documenting.  I fell down on the job and we have no pictures of Ari making the pocket holes.  But he did this thing where he mimicked the sound of the power drill while he was drilling.  I appreciate Ari's sense of humor.  Fortunately, if you're really itching to see one of my sons drilling pocket holes, you can see Gus doing so on the garden bed tutorial.

The garden bed didn't require super flush joinery, but as I mentioned, I wanted the bench to hold up to fairly severe scrutiny.  This required some sort of tool to help keep everything in place before the screws were doing that job.  Enter the right angle clamp! 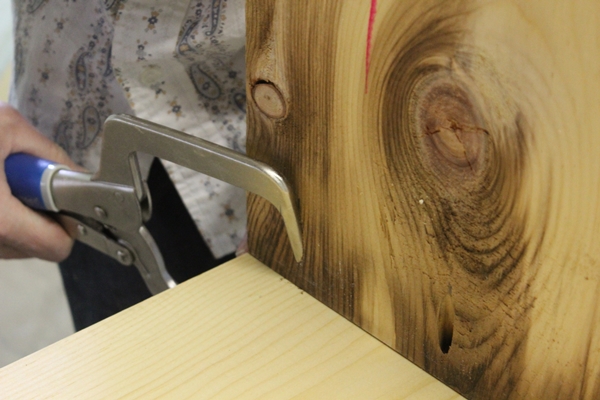 Once two of the screws were in place, the clamp is removed and the final screw is drilled in. 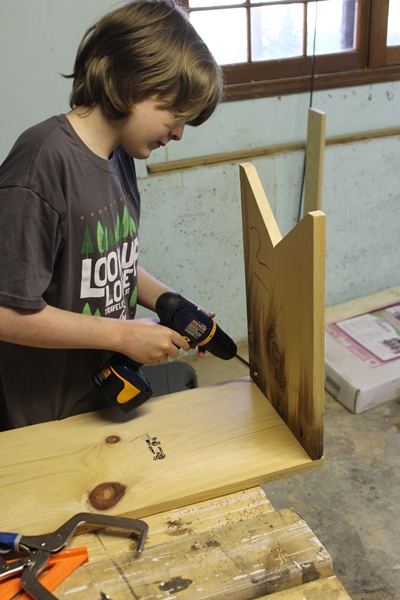 I remembered to take a picture!  We used the weak old battery powered drill that holds a charge for 5 minutes for this part.  (The corded drill is not adjustable and is better suited for making holes.)  The torque was set on a medium low setting to avoid screw stripping.  I didn't remember to glue these joints, but they seem solid without it.  Fine wood joinery! 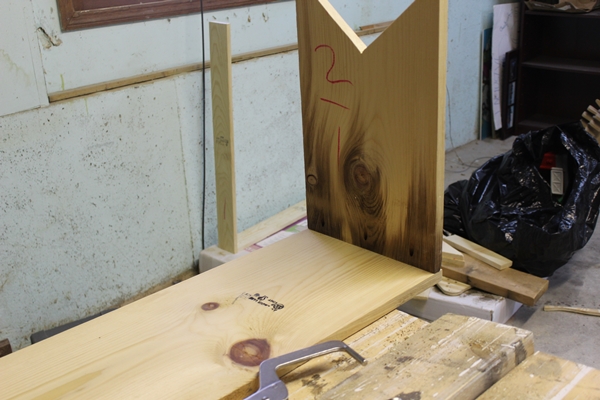 Ari hasn't seen, but would enjoy, the "I'm crushing your head" skits from Kids in the Hall. 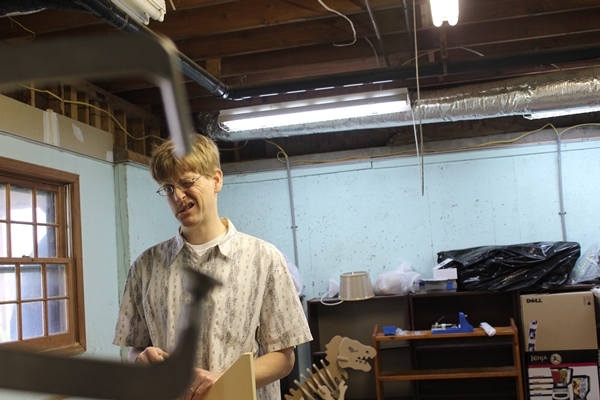 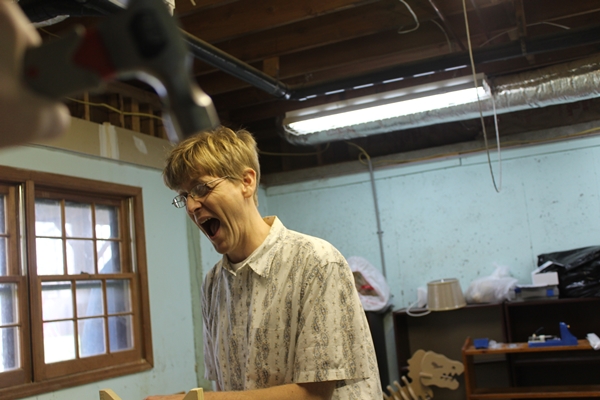 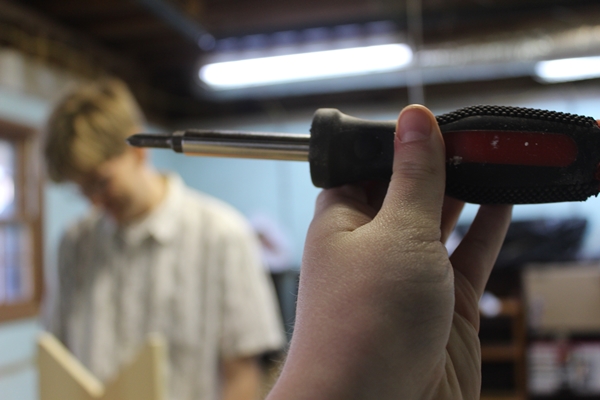 So here's the bench thus far. 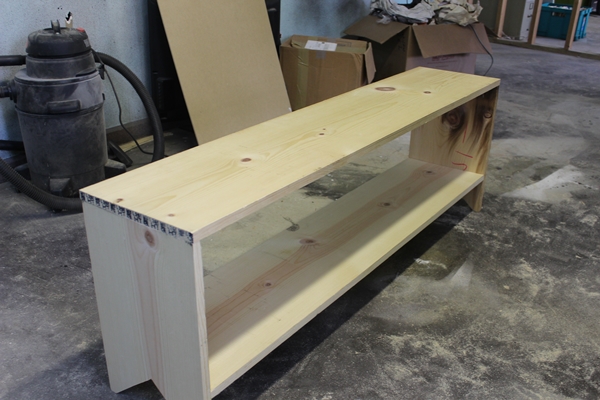 It looks like a passable bench, but when you sit on it, the top sags.  So turns out the trim isn't just for looks, it serves a stabilizing purpose.  Back to the circular saw and a few more wobbly cuts.  Before gluing and nailing the trim on, I decided to predrill the nail holes on the trim.  I figured that would make it easier to keep the trim in place when hammering.  I didn't know the best size hole to make, so with some scrap wood and some trial and error, I found a hole size I was comfortable with. 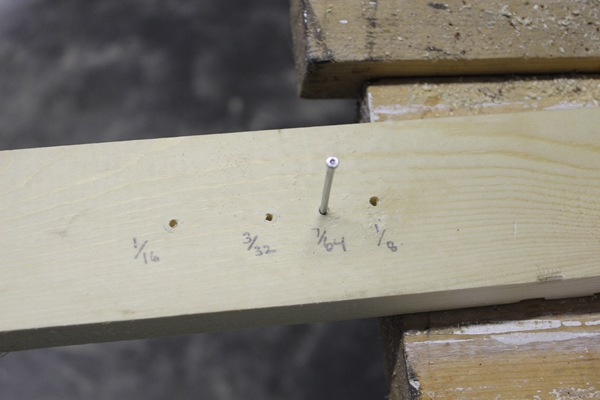 You can see that these nails have practically no head, so it was important to make the hole small enough so that the wood wouldn't just slip off.  The 3/32" hole probably would have worked fine, but I opted for the 7/64" drill bit. 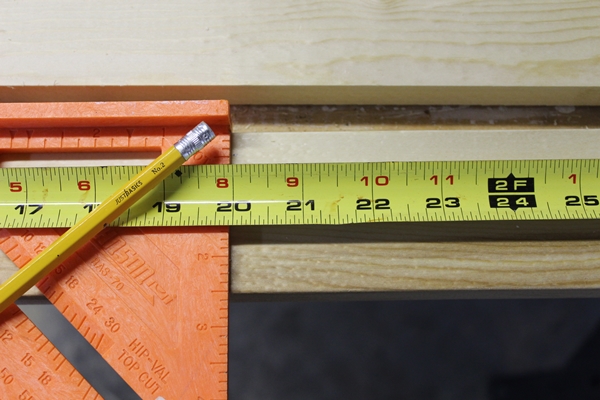 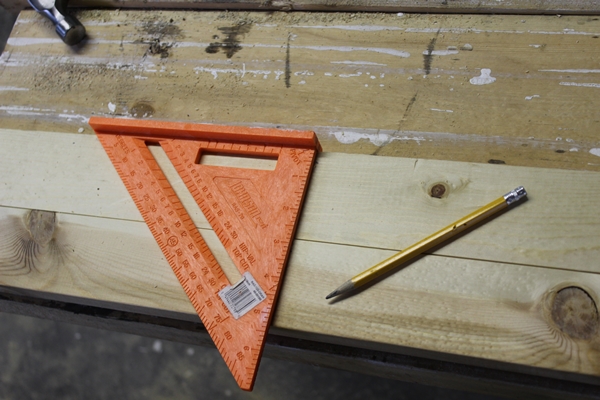 Then to glue and nail the trim on. 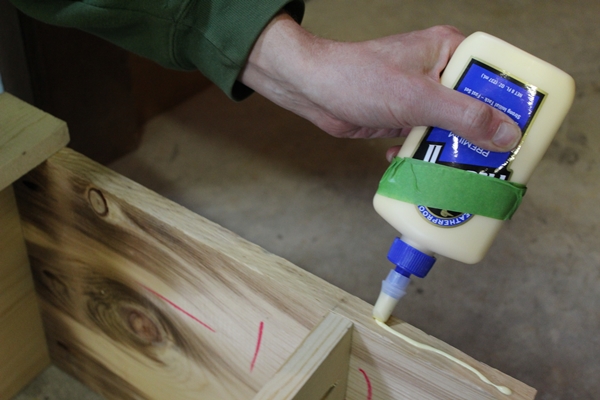 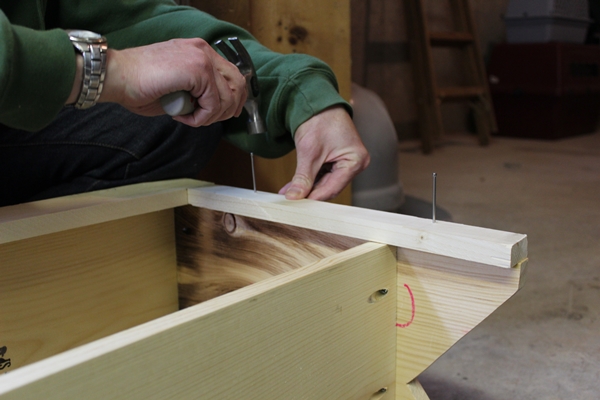 (Ari went through a period during this process where he got very concerned about copyright laws and wanted to cover up every single logo with some painter's tape.)  When nailing trim on, it is possible to bend the wood so that the wide surface of the bench top (or shelf or leg) is forced flush with the thin surface of the trim.  Holding that in place when hammering each nail will help with some fine wood joinery.  You may notice the tiny hammer I'm using.  It's the kids'.  I didn't feel like going upstairs to get the man-sized hammer.  I think I preferred the little hammer for this job, actually - it's better for accuracy and I didn't need, or even want, much power.

Once the trim was on, I wanted to neaten up the joints.  In two places, there was significant mis-measuring where the trim went past the bench by 1/8 inch or so.  Fancy pants me decided to pull out the circular saw to trim off the excess.  The first cut was a bit of a disaster, as it ate into the part of the bench I wanted to keep. I was much more careful with the second cut and things worked out better.  I was pretty depressed about that first cut, but was pleased to see how several minutes of power sanding can erase such mistakes.  I didn't get any before shots, but this is what the corrected edge looks like. 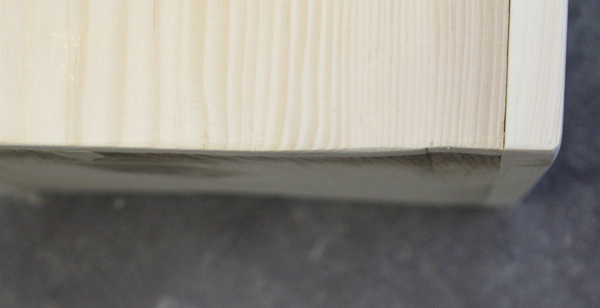 Here are a few more close-ups of fine and not so fine wood joinery. 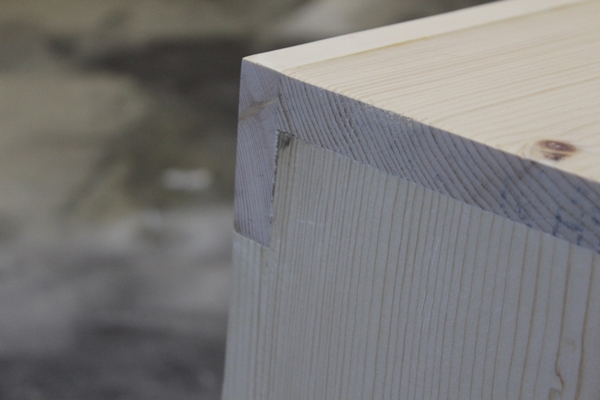 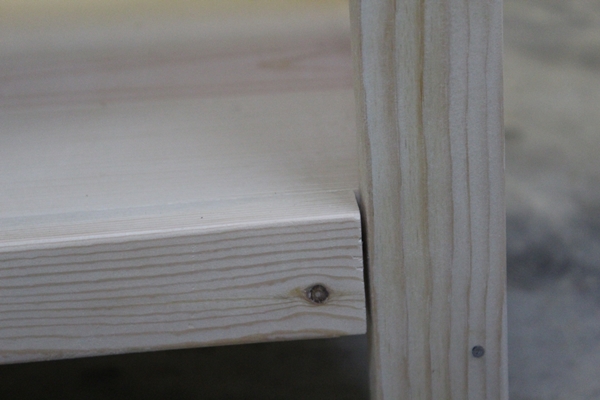 I was extremely pleased with the efficiency of my wood purchasing.  Here is the completed bench with all of the scrap wood.  Of particular note are the itty 1x12 slices on the bottom right.  Apart from the triangles (which can't be counted as waste, I think), this was the only leftover 1x12. 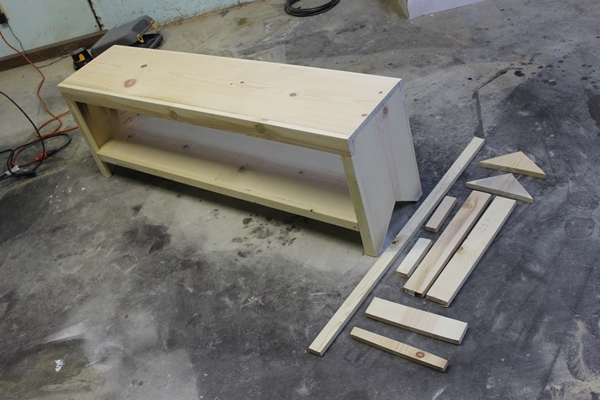 So there you have it!  My first piece of furniture.

He forgot to mention the parts where he sanded it with the power sander and stained it (the color is "weathered gray"). He did all of that, and then it looked like this: 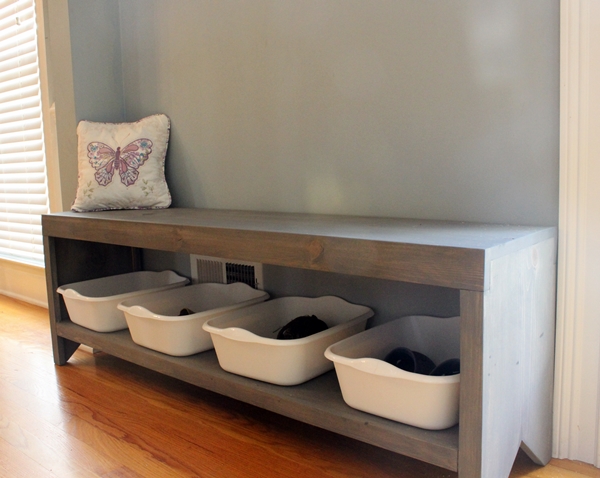 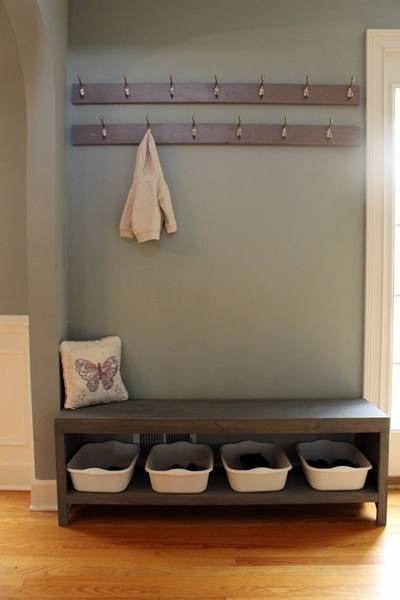 This post contains affiliate links
Posted by Gretchen at 7:30 AM