One might think, based on my posts from the last few months, that the only thing we ever do during Dave's breaks is go to aquariums. But it is merely a coincidence!

Still, since it just so happens that we've visited two localish aquariums recently, I thought I'd do a post comparing the two instead of just more pictures of cute kids and fish.

Chattanooga is about two hours north of here. When I was a small kid, one could go to Chattanooga to see tacky tourist attractions such as Rock City, with its many gnomes and terrifying suspension bridge: 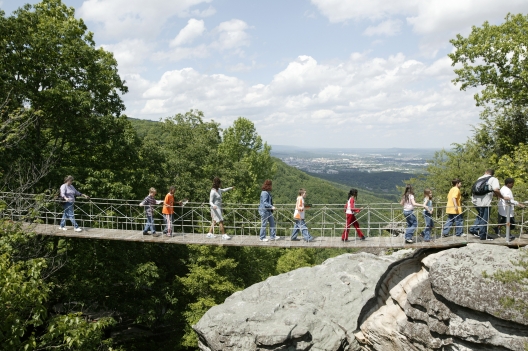 But then, in 1992, the River Journey portion of the aquarium opened. I remember going there when I was in high school with my grandparents. This was very exciting for everyone in the metro Atlanta area, because this was back when people thought aquariums should be built near water, so before this you'd have to drive closer to the ocean to get to an aquarium. River Journey is still, Wikipedia tells me, the largest freshwater aquarium in the world. Chattanooga is on the Tennessee River, so the idea was that the aquarium focused on rivers and the things that live in them. Like otters! River otters, that is. We should stop for a moment to note that there is nothing cuter than a river otter, and that, really, the Tennessee Aquarium could have stopped right there and not wasted all that money on fish, because who wouldn't drive a couple of hours to watch otters frolic adorably? 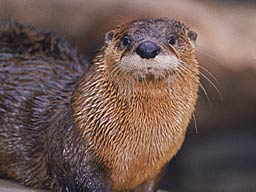 Meanwhile, in Atlanta, back when I was a kid, we didn't even have Rock City. We had NOTHING. Well. There were some things. For example, there was a toy museum. I thought maybe I was the only one who remembered the toy museum, but then I googled and found this guy who thought he was the only one who remembered the toy museum, too. It was there from 1978 to 1984, and I was born in 1975, so it was around for pretty much exactly the years when I would have been most fascinated by a toy museum. It was mostly antique toys, and, as I recall, they were grouped by theme. Like there was a doll room, and a trucks and cars room, and the very best of all was the dollhouse room, of course. But then they also had this sort of surreal Star Wars room, which was supposed to show you what the antique toys of the future would look like. And.....OMG, WHY DON'T THEY BRING BACK THE TOY MUSEUM??!!

So. For a long time, there was the Tennessee Aquarium with its River Journey, designed to revitalize downtown Chattanooga but also with a noble educational, research-minded vision.

Then someone decided to build a big, flashy aquarium in Atlanta, nowhere near the ocean, and not at all interested in sticking with this regionally appropriate freshwater crap.

(I'm not sure how accurate my aquariums history lesson is here. This is my understanding of things, though).

And the Tennessee Aquarium panicked, because do you know what they don't have in rivers? Beluga whales.

So the Tennessee Aquarium tossed up the "Ocean Journey" building in 2005, the same year the Georgia Aquarium opened. They still don't have Beluga whales. But they do have penguins, which are pretty much the saltwater competition for river otters, as far as cuteness goes.

We went to the Georgia Aquarium back in January. To sum up: it was really crowded, and the dolphin show sucked.

Last Friday we went to the Tennessee Aquarium. We bought a membership there because it was, at $115, only $20 more than just paying for all of us to get in once. Do you know how much a membership for everyone (minus Abe, who's free) would cost at the Georgia Aquarium? $270. True story. You might already see where I'm going with this showdown.

The first thing you do when you get in the aquarium (whether you choose Ocean Journey or River Journey to start off with (we picked Ocean Journey)) is get on a big old escalator and go to the top of the building. Then you wind your way down through the exhibits. I took this picture of the kids (we went with my friend Kristi and her kids: Lula, Marcos, Cormac, and Leo) on the escalator, and then I felt all woozy and vertigo-y and decided to put the camera down before I fell: 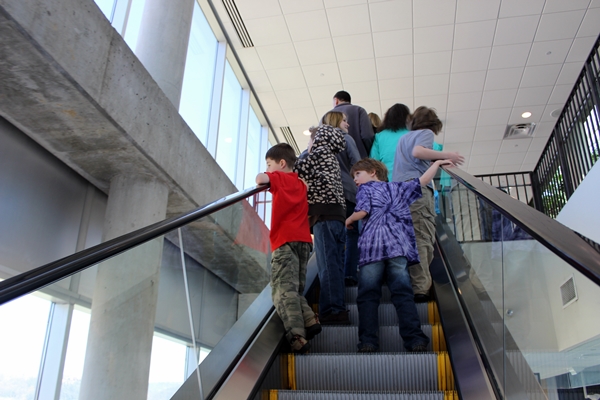 The first animal you come to in the Ocean building is the macaws: 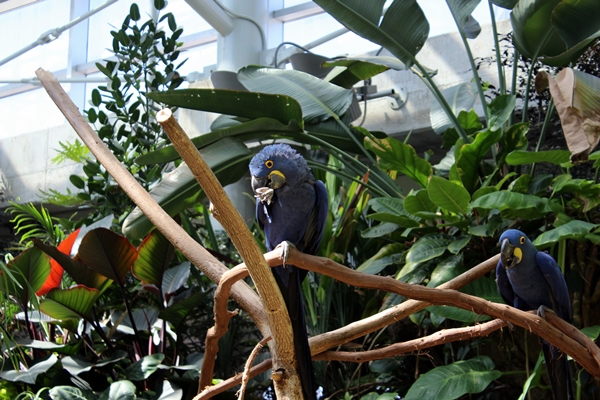 Last time we were there, these guys were completely hilarious; they were repeating everything we said and then laughing back at us when we laughed. It was awesome. And Gus remembered it vividly, even though it was over two years ago. But this time the macaws were, apparently, totally bored with all the visitors, and they weren't saying a thing. Gus was very disappointed.

Okay, so second comparison, aside from price: the Tennessee Aquarium was crowded, but NOTHING like the Georgia Aquarium when we went over Christmas break (this trip was over spring break). No one told us to hurry along while we were trying to gawk at penguins. We did not feel claustrophobic and overwhelmed. I will never go to the Georgia Aquarium during a school vacation again.

The Tennessee Aquarium has a butterfly garden. The Georgia Aquarium does not: 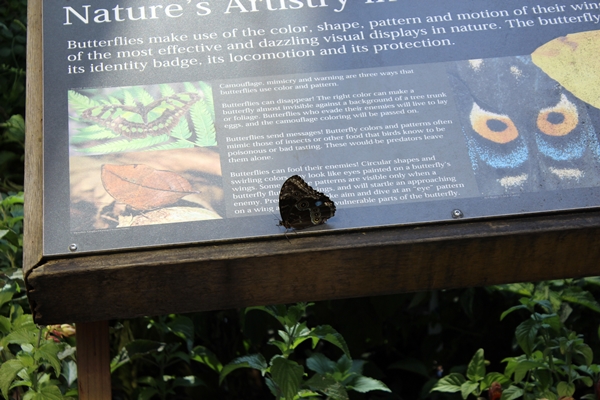 We saw many penguins! Penguins are great (Georgia Aquarium has penguins, too, but don't expect to be able to get anywhere near them if you go over Christmas break): 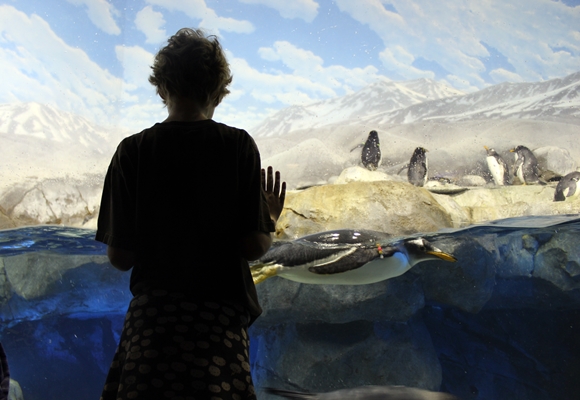 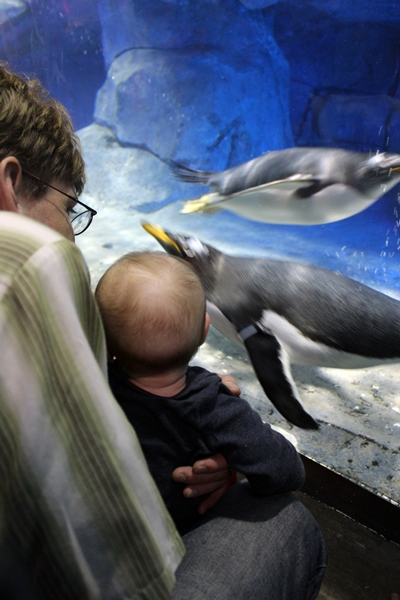 We wound our way down through the ocean building, taking pictures. I think there are more jellyfish at the Tennessee Aquarium than the Georgia Aquarium: 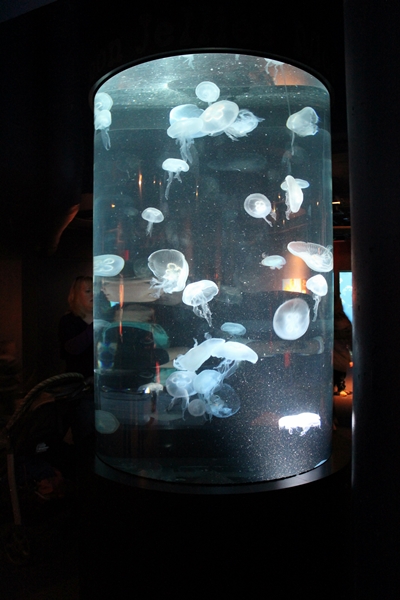 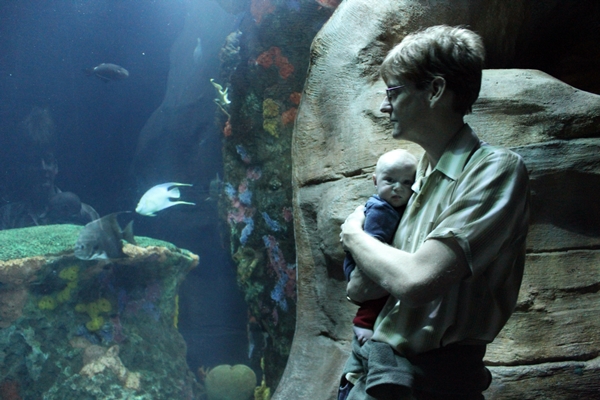 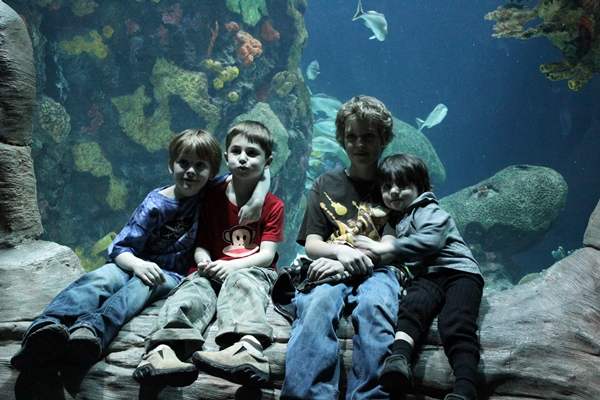 I took this bad picture of Lula and Ari just to prove they were really there: 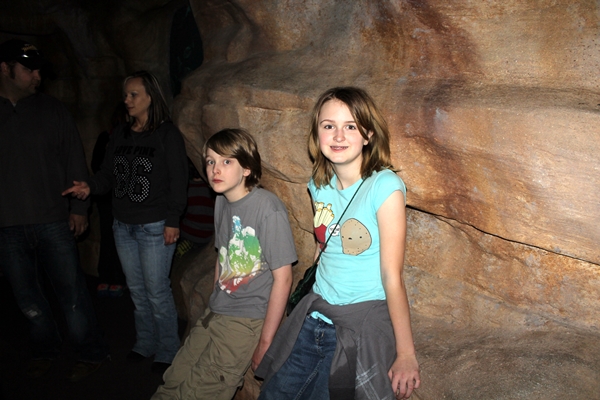 And this one turtle was being mean to this other turtle who didn't even have any back legs to fight back with. Bad turtle! 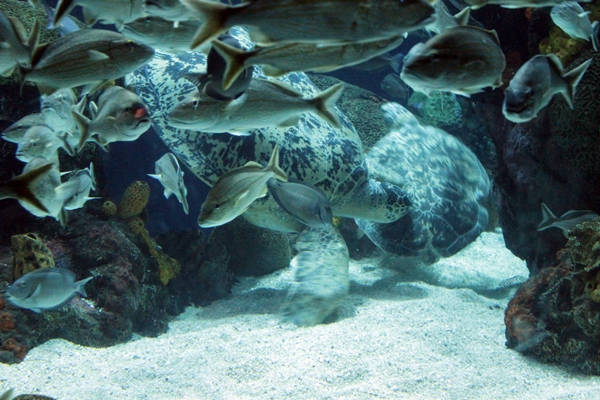 After our ocean journey, we took a break for lunch, then went back for the river journey: 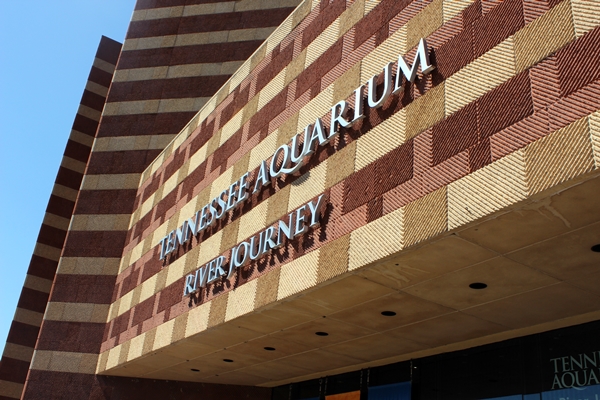 Then I remembered why I never get many pictures in this building. It's really dark in there!

Also, the otters were sleeping. Boo! They were curled up together adorably and all, but they weren't frolicking. At least we have a membership, so we can go watch them frolic another time.

We did get to pet sturgeon: 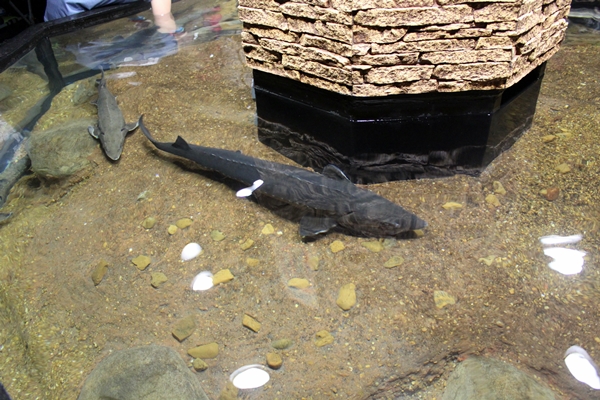 There were a lot of fish: 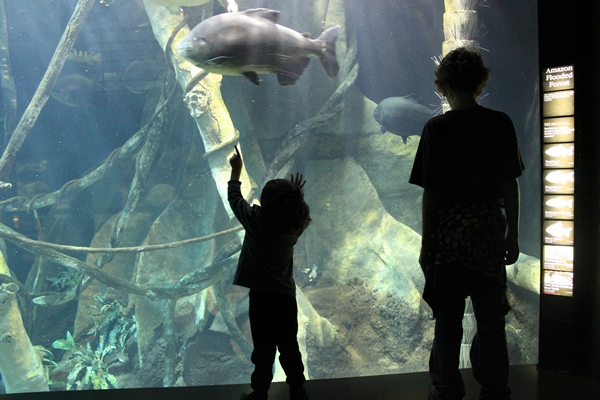 Then we drove home. It took a long time. Next time I think we will stay overnight.

So? Can you guess which aquarium wins? I know a lot of people prefer the spectacle and the Beluga whales at the Georgia Aquarium, but for my money (less than half as much of it), I'll take the low key, less crowded aquarium with otters (disclaimer: the Georgia Aquarium has otters, too. And they were awake. But by the time we got to them I was very tired and mostly just wanted to go home and get away from the crowds).
Posted by Gretchen at 7:30 AM