The 15 Most Beautifully Written Books for Babies and Toddlers 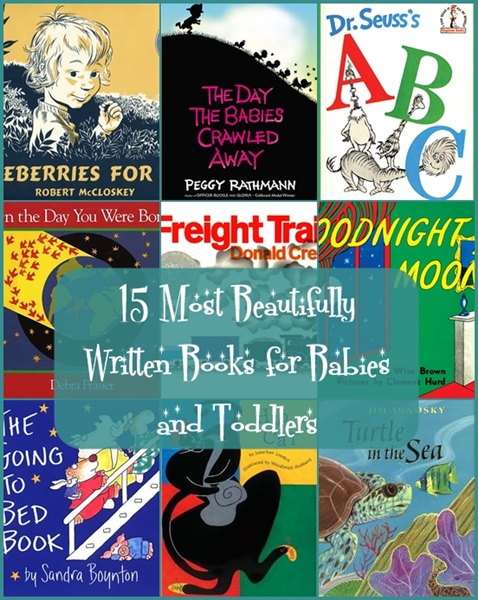 A few disclaimers and notes first.

I certainly don't claim this list is definitive, and, in fact, I hope you guys will chime in with additions for me to check out. And there are plenty of close runners-up that I'm leaving out. And I'm sure I'm forgetting some that I would have put in if I'd only remembered them. And of course, "most beautifully written" is entirely subjective, and everyone's list would be different. All of that said, I've read an awful lot of books to babies and toddlers in my time, and I've come across many great ones. And right now I'm lucky enough to have a baby who finds books delightful. And I like making lists.

It's hard to know exactly where the toddler vs. preschooler book cut-off is (because I'm totally making a preschool list in a few years, too). I've got Corduroy here, but I'm saving the Alfie books for later, and that's not a decision for which I can offer any particular justification. Likewise, I'm putting Blueberries for Sal here and setting aside Make Way for Ducklings, and that may be entirely because I think Robert McCloskey deserves to be on all the lists.

I'm titling the list very deliberately: it's not intended to be my favorite books or the best books. I'm focusing in specifically on language (which is not to say that most of these books don't also have fabulous illustrations. But that wasn't a requirement, and many books with gorgeous art and at least slightly less impressive language didn't make the cut).

So here, in no particular order, is my list:

1. Turtle in the Sea by Jim Arnosky

And now onshore, as she has done so many times before, she lays her eggs one by one, and covers them all with sand.

But she will not stay to see them hatch. That is the turtle way.

I always like Jim Arnosky, but he kicks the pathos up a notch here with this tale of a sea turtle to whom terrible things keep happening. But she triumphs over it all and lives to make gazillions of baby turtles. Bonus points for repeated use of the word "tiny," which invariably makes me cry these days (I, umm, think it might be the hormones).

2. Blueberries for Sal by Robert McCloskey

Little Bear and his mother went home down one side of Blueberry Hill, eating blueberries all the way, and full of food stored up for next winter.

I love the calm, matter of fact approach to the bear/human encounter, with its reminder (echoed in so many children's books) that grown-ups tend to be silly and alarmist, and the perfect symmetry of the two intertwining storylines.


Okay, there's not a whole lot to the text of "Freight Train." But put the spare text together with the simple but  engaging pictures, and you have pretty much a perfect book for toddlers. It teaches colors; it teaches parts of train, and it does it all like a poem. Crossing trestles, indeed. How perfectly lovely.

...and they went out together into the deep, deep snow.

Just the right amount of plot for toddlers. Do fun things in the snow (fascinating for Georgia toddlers, in particular) then the manageable crisis of thinking maybe all your snow's gone. Before the happy, more snow ending.

5. Where the Wild Things Are by Maurice Sendak

And Max the king of all wild things was lonely and wanted to be where someone loved him best of all.

Right? The perfect summation of what it's like to be a kid, with that ongoing struggle between a desire for autonomy and a desire to feel safe and cared for. And if you haven't seen Stephen Colbert's interview with Maurice Sendak, then you really, really must.

He hopped on the night train--
the faster-than-light train--
and in no time he came
to a city by a bay.

This book is tons of fun to read. And it's great because it teaches kids that if you want to be a jazz musician then, yeah, you can totally make a living doing that. No problem. Umm, I mean, it teaches them to follow their dreams and all that.

"Whoo? Whoo?" asked the owl. "Who built this beautiful web?" The spider didn't answer. She had fallen asleep.

It had been a very, very busy day.

I know "It was the best of times, it was the worst of times" and "Call me Ishmael" have their fans, but for my money you can't beat, "Early one morning the wind blew a spider across the field," for great opening lines. Eric Carle does have a somewhat unhealthy dependency on the word "very," but aside from that he does good work here. Abe loves this book even though I accidentally dropped it on his face one time. You can't really get a better endorsement than that.

8. On the Day You Were Born by Debra Frasier

"Welcome to the spinning world," the people sang, as they washed your new, tiny hands.

This book was published in 1991, and I didn't start having babies until ten years later, so what I want to know is: why didn't anyone ever tell me about it?! I did not read this book to any of my first three kids. I came across it at the thrift store a couple of months ago and picked it up for Abe. Now I've read it to him 50,000 times, and I don't think I made it through without crying the first 40,000 or so. Look! It has the word tiny in it, and that alone would be enough to do me in.

According to the back cover of my copy, Entertainment Weekly said of it, "Reading this picture book aloud to a child, even the most jaded among us may feel again the sheer miracle of our human existence." Yes, we just might.

"If you become a rock on the mountain high above me," said his mother, "I will be a mountain climber, and I will climb to where you are."

Projecting one's own particular paranoia/psychological needs/what have you onto "The Runaway Bunny" seems to be a popular past time. Looking around last night, I came across a couple of Orwellian reads on it (one commentator compared the mother bunny to Nancy Pelosi, rather specifically). I can't really read it the same way I used to since seeing a production of the play Wit (when Ari was 4 months old, so it heavily informed most of my readings of the book) wherein the story is read as an allegory for God searching for lost souls. I'm sympathetic with this more generous reading. It's a book for toddlers after all. They honestly DO want to know that their parents will always be there for them and do not find that idea terrifying and sinister. The carrot at the end  is not laced with anything, people.

(incidentally, Abe HATES "The Runaway Bunny." Even though I never dropped it on him. But I bet he'll come around).

That's right: Margaret Wise Brown gets TWO entries, because she's just that awesome. "Goodnight Moon" does not invite deconstruction the way "The Runaway Bunny" does...but you can spend a lot of time pondering the double meaning of "goodnight noises everywhere" (is goodnight modifying noises? or are you supposed to say goodnight TO the noises?)  and wondering why the quiet old lady is a rabbit. Is SHE Nancy Pelosi?

11. The Day the Babies Crawled Away by Peggy Rathmann

Remember the way
They followed you home that day?
Through the cave and the trees,
On their brave, little knees....

"Their brave, little knees:" it kills me! Peggy Rathmann is probably best known for the nearly wordless "Goodnight Gorilla." Here you have a lot of the same kinds of playful illustrations with patterns and repetition to look for as in Gorilla, but you also get a great story, beautifully told, about babies who crawl away and the heroic little boy who brings them back safely.

12. The Going to Bed Book by Sandra Boynton

Sandra Boynton is an excellent rhymer. We're big fans of many of her books (Barnyard Dance, But Not the Hippopotamus, Snuggle Puppy....we have LOTS), but this is one is my very favorite, and it's all because of those last couple of lines about high moons and deep seas. Love it.

13. A Child's Garden of Verses by Robert Louis Stevenson, illustrated by Eloise Wilkin

The rain is raining all around,
It falls on field and tree,
It rains on the umbrellas here,
And on the ships at sea.

I'm cheating a little bit in specifying the Eloise Wilkin version, but I had it as a kid, and I can't really separate the poems from those illustrations. I remember thinking of them as at once exotic and accessible, somehow.

"Could this be a mountain?" he wondered. "I think I've always wanted to climb a mountain."

Another one with a perfect plot for toddlers....simple, easy to follow, but with a bit of magic. And "A Pocket for Corduroy" is equally enchanting.

Big A
little a
What begins with A?

My favorite alphabet book, hands down. I read it as building to a sort of frenzied crescendo by the time you get to Z. I'm not sure if that's what Dr. Seuss intended or not.

Your turn! What am I leaving out? Tell me your favorites--Abe needs more books!