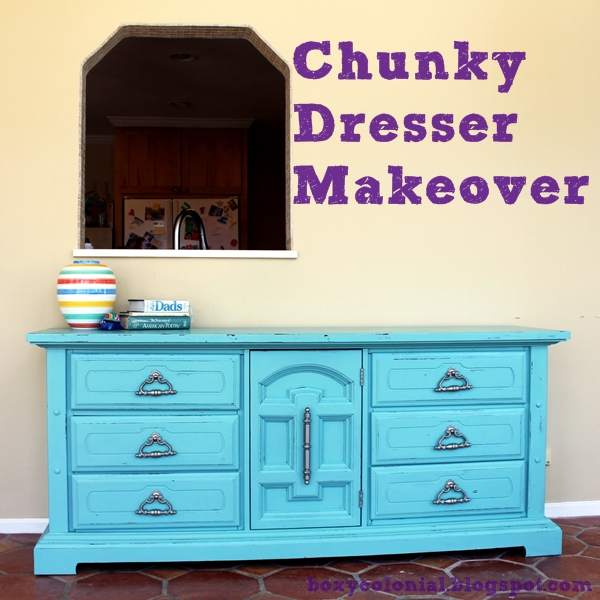 Awhile back, as some of you may recall, I bought a big chunky dresser for $45 at the thrift store (not on the same Friday night that I bought everything else that's now in my house, but at the same store). Said dresser is unbelievably heavy and still has a stamp on the back dating it to 1974. I'd had some hopes that it might work in our den for a TV stand, but it is, it turns out, far too ginormously long for that.

So it ended up in the special room in our house where we keep all the things we don't know what else to do with: the sunroom! Only this time we sort of did know what we were going to do with it. We knew, at least, that we were going to paint it and then....put stuff in it. I think maybe craft supplies? Extra dishes? Maybe we'll get really crazy and keep extra dishes and craft supplies in there, because it's just that big. Did people have more clothes in 1974? Maybe it's just that they had smaller closets, so they had to keep more clothes in their dressers?

Incidentally, Dave does not like calling this dresser a dresser. He really wanted an alternative name, since we won't be using it as a dresser for clothes. I introduced him to "credenza" and he was all over that, but I don't think it is a credenza, even if one defines the term really generously. Although Wikipedia seems as confused as Dave about the definition of credenza. It says that a credenza is "a piece of furniture comprising a central cupboard flanked by symmetrical quadrant glass display cabinets, usually made of burnished and polished wood and decorated with marquetry" ....and then shows two example pictures that aren't anything like that. So I guess Dave can call our dresser a credenza if he wants to. 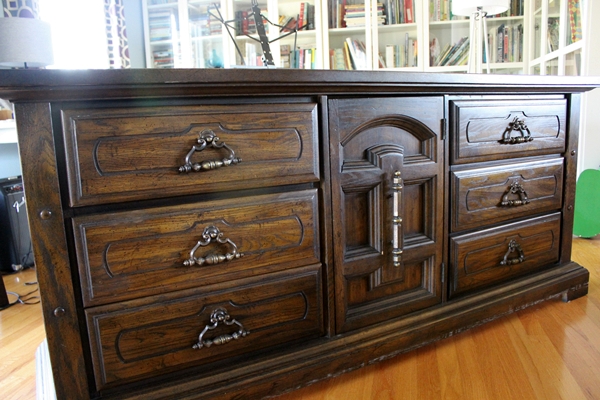 I've been itching to use some turquoise or aqua somewhere in the house, and the sunroom, with all the light it gets and with its terra cotta tiles, seemed like the ideal location. I spent quite a bit of time online researching the prettiest colors Benjamin Moore has to offer on the aqua to turquoise spectrum, wrote down the names of several top contenders, then got to the store and....couldn't find a single one. I should have written down numbers, too, it turns out. I could have asked for help, but the store was pretty busy, so I just looked at the samples and picked one out right there on the spot. I ended up with Florida Keys Blue.

It's a little more aqua and less blue in real life than I expected (although in the pictures it looks bluer than in my sunroom. I think. It's hard to tell. Light is a funny thing), but the great thing about Benjamin Moore is that even when colors don't look how I expect them to, I'm still all, "OMG--it's the prettiest color I've ever seen!" Benjamin Moore does not pay me. But they should.

I agonized for quite some time over how to paint this. I got the paint in semi gloss to leave my options open. Ultimately I decide on mixing plaster of paris in to chalk paint it up, largely because I was feeling lazy and didn't want to sand and prime it first. Also because I knew if I wound up distressing it (which I hadn't decided about yet), I'd want the dark finish to show through rather than bare, sanded wood. I use this recipe from I Heart Naptime. This time I added in a little more plaster of paris, just as an experiment as I've seen other formulas that use a lot more. I didn't notice much difference over other times when I've used it.

I did two coats of paint (Dave liked it after one coat, with some of the dark stain showing. I kind of did, too. But not enough to stop painting). Then I sanded the edges to distress it, then put a coat of wax on it.

I only briefly considered swapping out the hardware. I thought it would be hard and/or expensive to find something substantial enough to look right on there, so I just repainted the old hardware with Rustoleum satin nickel metallic spray paint instead. This kept the whole cost, for the dresser plus paint, down around $70 (and we still have plenty of Florida Keys Blue and satin nickel spray paint left over).

That rainbow striped vase? That I did get on clear-out-the-whole-thrift-store-Friday. 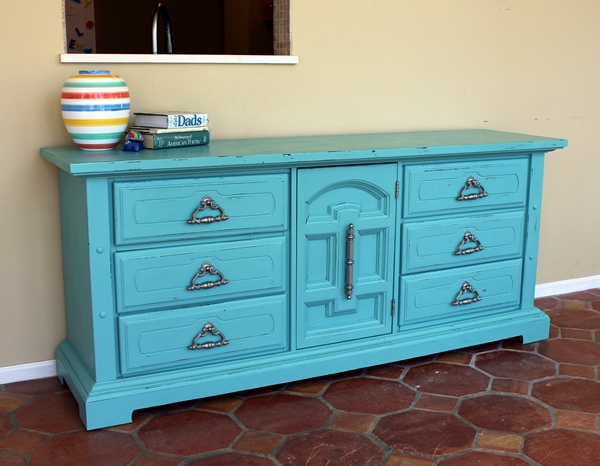 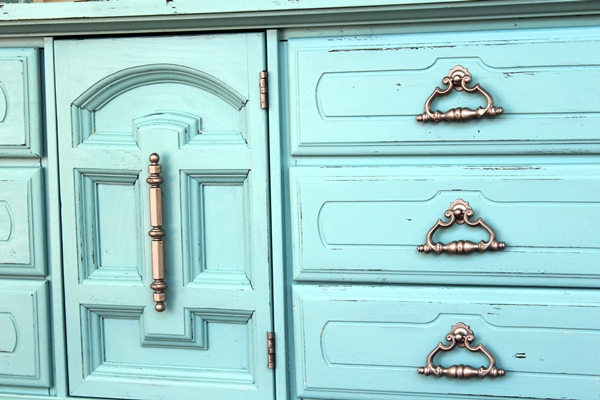 I think the bottom picture gives the best representation of the real color.

I'm excited about getting a usable sunroom! There have been a couple of other changes in there, too, so I'll have a sunroom update post sometime in the fairly near future.

Linking with:
Give Me the Goods Monday
Tutorials, Tips, and Tidbits at Stone Gable
Hookin' Up With House of Hepworths
Friday Link Party at Craftionary
Inspiration Gallery
Miss Mustard Seed's Furniture Feature Friday
The Shabby Nest's Frugal Friday
Chic on a Shoestring Decorating's Flaunt It Friday
Tatertots and Jello Weekend Wrap-Up
I Heart Naptime's Sundae Scoop
Monday Funday
By Stephanie Lynn's Sunday Showcase Party
Tutorials and Tips at Home Stories A to Z
Get Your DIY On
Posted by Gretchen at 8:00 AM