The Super Secret Project: The Day the Glue Gun Let Me Down 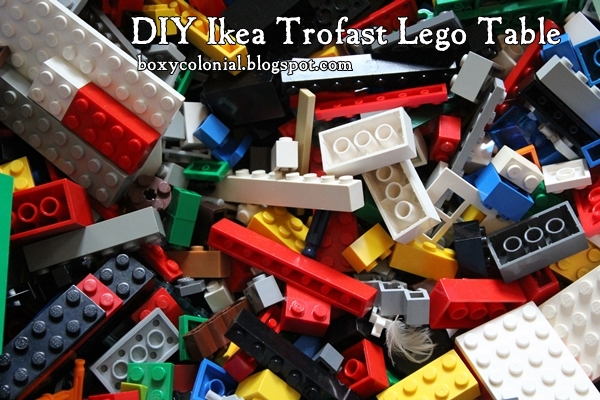 And now, at last, I reveal the super secret project that I actually already mentioned, back when I posted about August and Milo's room. It's also a really simple project, both in theory and in execution, so I hope no one feels too let down by all my "super secret" build up.

I came across the idea to make a lego table out of Ikea Trofast shelves awhile back on SunScholars blog: 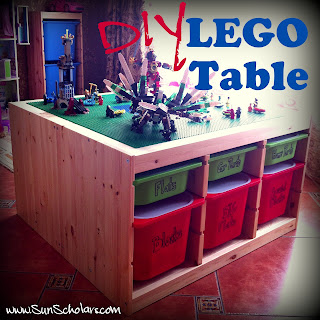 Pretty cool, isn't it? I loved the way it looked and the idea of the built in storage. But I wanted something a little smaller for Milo and Gus' room, so I decided to make theirs out of just one Trofast shelf, instead of two attached together.

We picked up the shelf and bins (I wanted all green, but they didn't have green for the bottom ones, so we went with white instead) at Ikea last Sunday. Then I looked around online to find the best combination of baseplates. The best deal and the best fit for the single shelf was 2 of the extra large gray plates. Each one measures 15 by 15 inches, and the shelf is around 17 by 36, I believe, so two of them would fit nicely with just a few extra inches.

I waited for the baseplates to get here from Amazon. They came in a ridiculously big box: 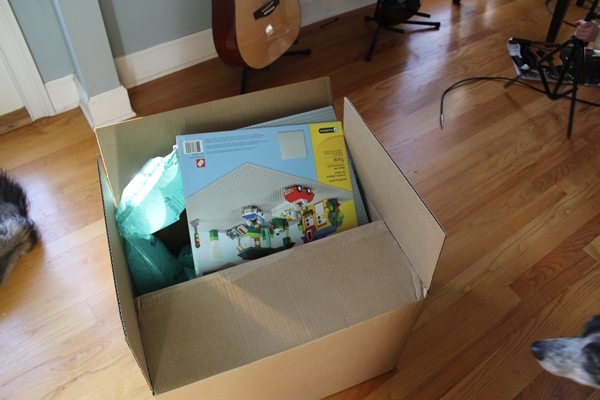 ...packed in a million inflatable bag things that the kids have been having much fun with: 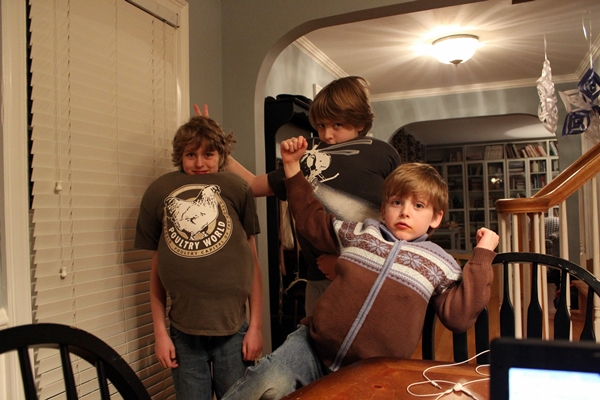 Then I sat down to start assembling the shelf: 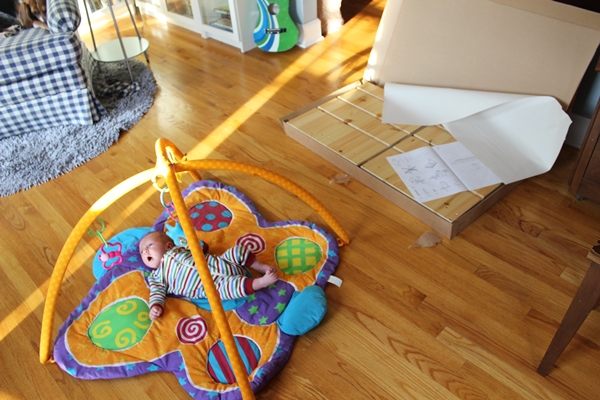 I got about this far: 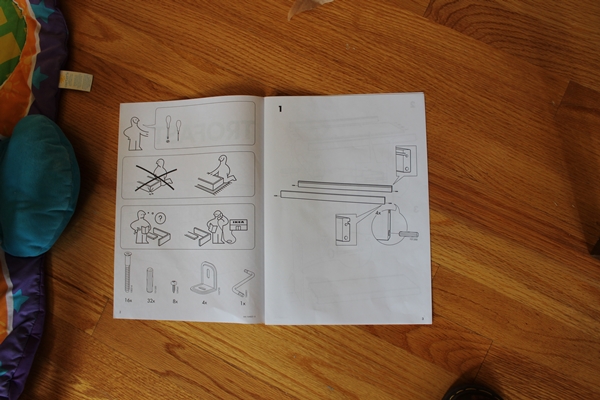 ...before Abe decided he was all done with his fun butterfly mat. Then Milo held him for awhile and bought me another 3 minutes or so: 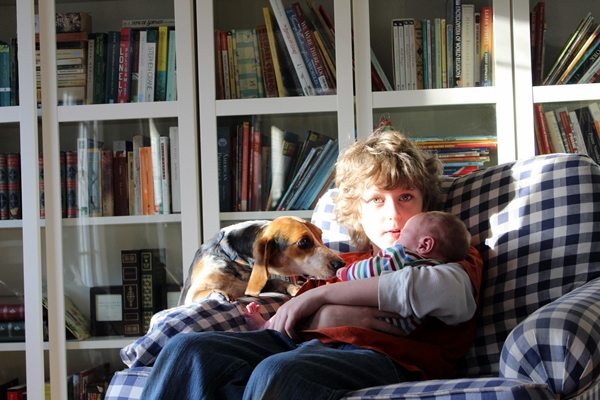 Then Dave came home and I finally finished putting it all together. Trofast shelves are relatively easy to assemble, as far as Ikea stuff goes. 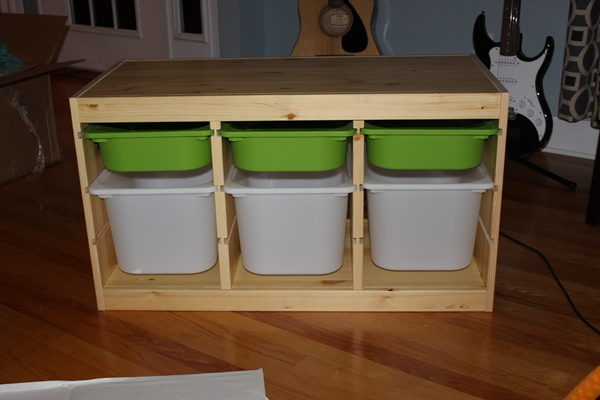 Next I broke out the glue gun to attach the baseplates to the shelf. First I attached them to each other with legos, to make sure they'd line up correctly once they were on the shelf, as per the suggestion of Sun Scholars: 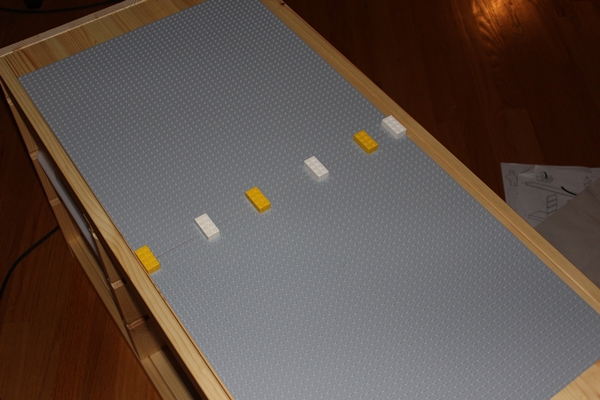 There was a lot of area to cover, and I had to put a new glue stick in the glue gun halfway through, but I went as fast I could, got a bunch of glue on there, turned them over and pushed down, and....they didn't really stick at all. Yeah. I'm not sure if the glue had too much time to dry before I could get it turned over or what, but, at any rate, glue gun fail.

Dave suggested liquid nails. But our liquid nails container said it was no good for plastic.

So, finally, I went with heavy duty double sided tape. This is what Sun Scholars used, but she said it was because they wanted something less permanent and suggested that glue would probably be better if that wasn't a concern. Or maybe not, it turns out. I'm sure there's some kind of glue like substance that would work, but going with double sided tape seemed easier than hunting said substance down.

So the next day Dave picked some up at Target and, after a lot of time spent picking dried glue off the plates with my fingers, I gave it another shot. 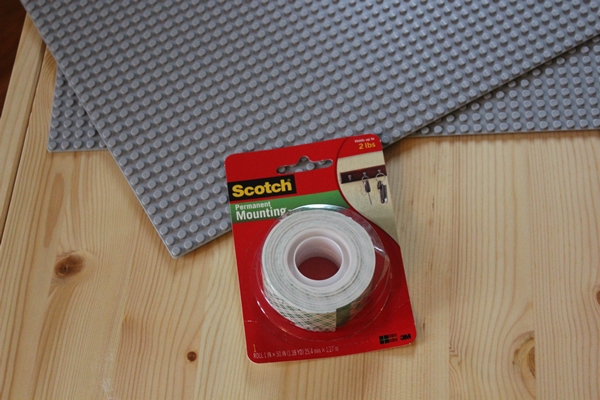 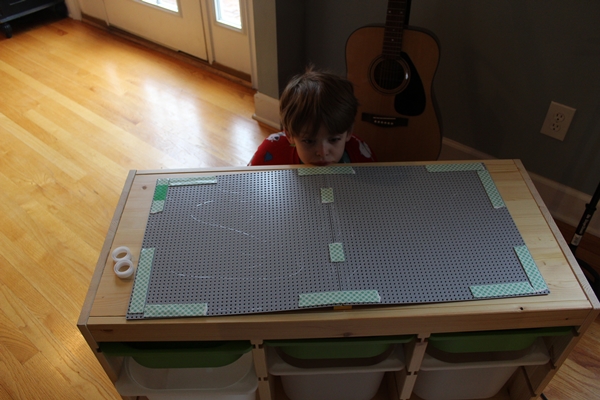 That was the whole roll of tape. It costs $4 a roll and doesn't go very far. But far enough, it seems. So far it's holding up very well.

Then we hauled the finished project up to Milo and Gus' room and turned them loose to rehome the legos and start playing. They have some sort of elaborate organization system in mind, so the transfer from the old bin is still a work in progress, but they've been having fun. 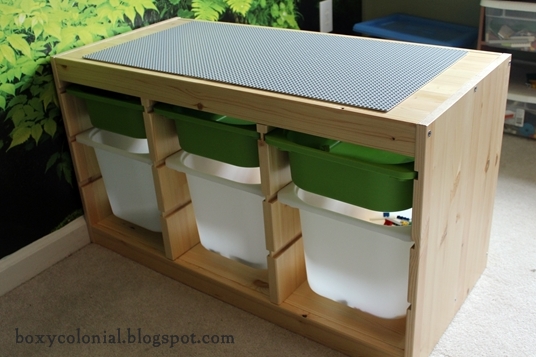 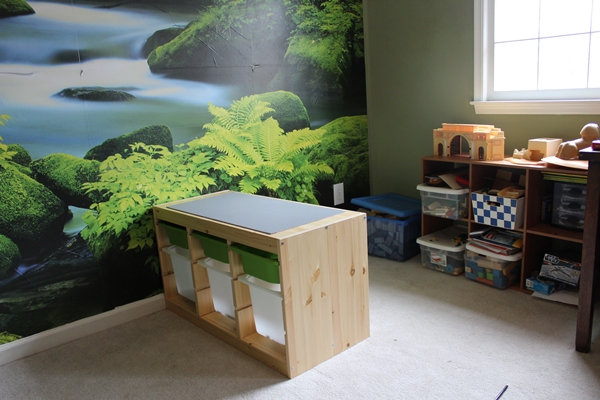 I moved that shelf that used to be against the mural wall over to under the window, where the bin of legos used to be. I wanted the lego table this way so that a kid could be on either side of it. Within an hour, it looked like this: 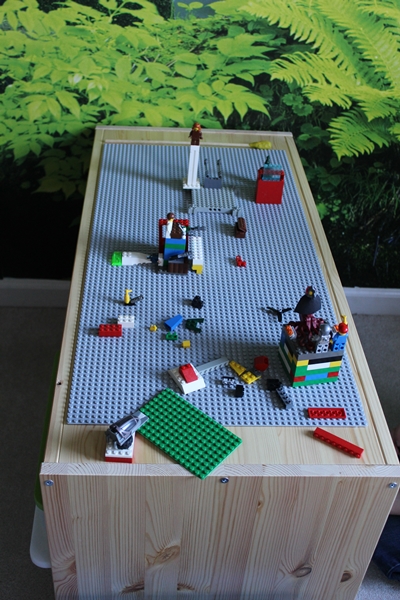 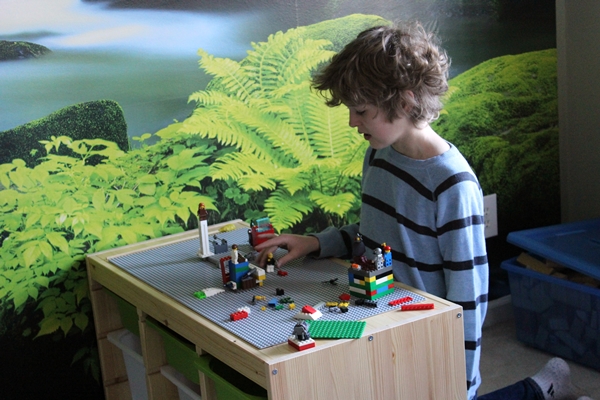 So there you have it. An easy lego table and, I'm hoping, a way to keep legos where they belong instead of all over the floor and under the bed.

Not the thriftiest project in the world (the Trofast shelf is $69. The bins are $4 for the big ones and $3 for the smaller ones. Base plates were around $15 each), but it saved us some money over buying a pre-made one and we were able to get it exactly how we wanted as far as size and amount of storage space.

Classy Clutter's Spotlight Saturday
Under the Table and Dreaming's Sunday Showcase Party
Tuesdays Treasures at My Uncommon Slice of Suburbia
TwelveOEight's Pretty Things Party
Tutorials and Tips at Home Stories A to Z
From Dream to Reality at the DIY Dreamer
Tutorials, Tips, and Tidbits at Stone Gable Blog
Hookin' Up With House of Hepworths
Somewhat Simple
The Inspiration Gallery Link Party
Chic on a Shoestring's Flaunt It Friday
The Shabby Nest's Frugal Friday
Tatertots and Jello's Weekend Wrap-up Party
Posted by Gretchen at 8:32 AM