Progress in Ari's Room: a Bedside Table Made Over 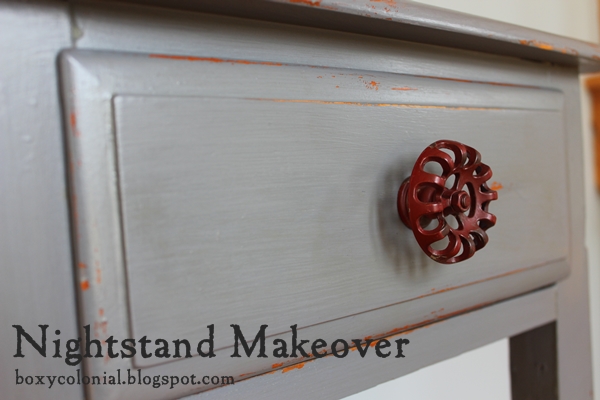 My goal is to finish Ari's tween room before he's a teenager. Or, preferably, by the beginning of April, because we have a big project in mind for Dave's spring break. We'll see how things go, though, as always.

But! There has been definite progress since I first posted about the current state of and future plans for Ari's room. Like remember the half painted trim that my poor kid had been living with for months? 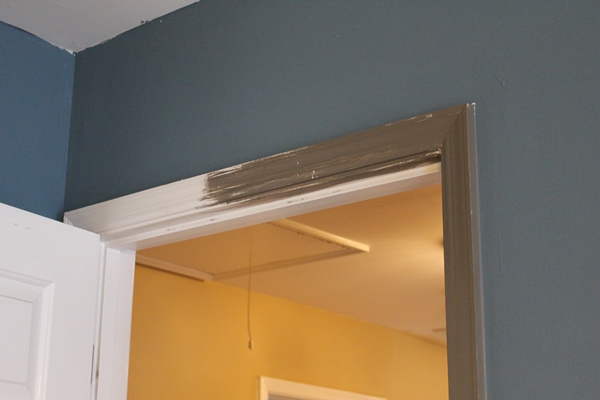 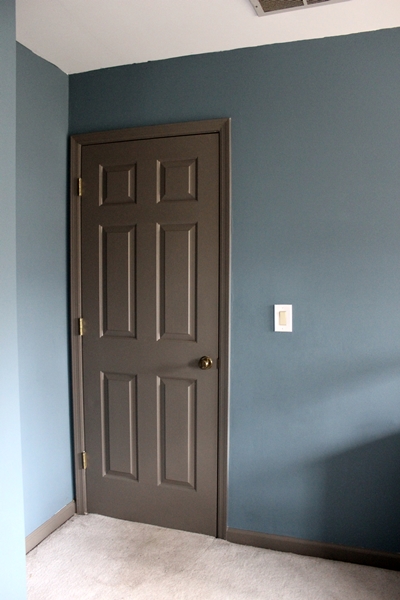 I also came up with the most amazing idea for something for the wall EVER. It is a surprise, and I have no idea if we can actually do it or if it will work at all the way I want it to, but if we can and it does, it's going to be FABULOUS. Teaser!

But more on that another time.

Ari had three pieces of furniture in his room that needed some love. All of them are that old orangey wood (maple?) and pretty juvenile looking. And Ari's ELEVEN. And a half.

This little nightstand was the least ambitious project, so of course we started with it: 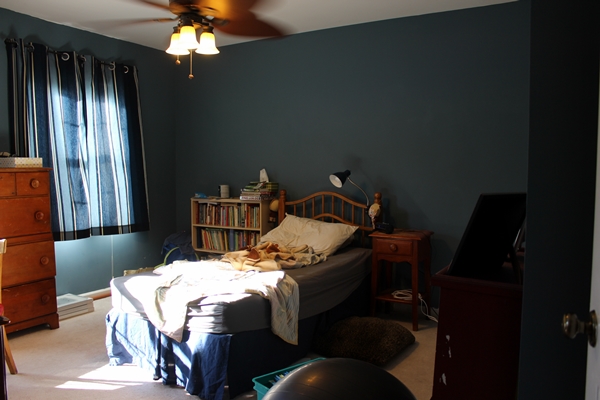 There it is, over by the bed.

Here it is, after we moved it downstairs to start working on it (only we'd already taken the drawer out by then, so I wanted to post that one up there so you got the whole idea): 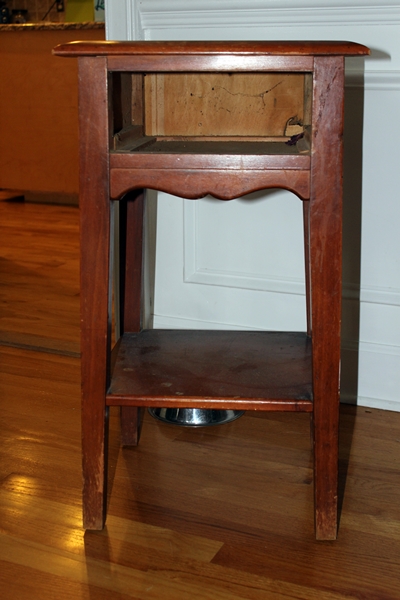 Those scalloped edges were, I felt, incompatible with the look we were going for, so I asked Dave if he could take them off. Fairly straightforward for the front, because it was a separate piece that would break right off. But the sides were different: 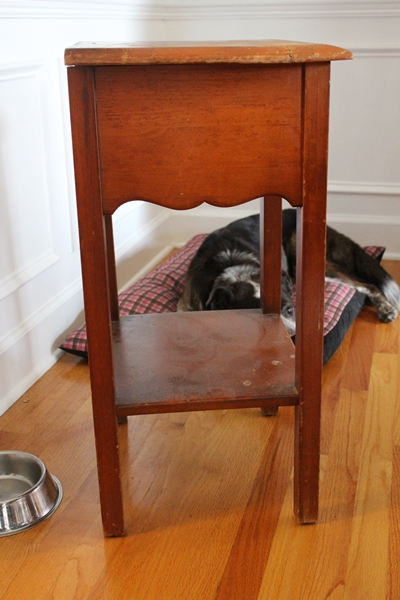 Dave was not confident. "You know I'm not actually a carpenter, right?" he said. But MY confidence in Dave is boundless, so I convinced him to give it a try (and, hey, the $7.95 thrift store price is still written in marker on the back, so it's not like he'd be destroying a priceless antique if he messed it up). He got to work with the jigsaw and came back with this: 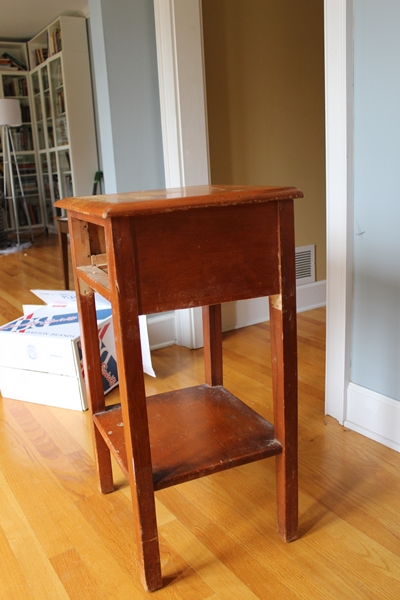 Not a carpenter, my foot! Look at those nice clean lines! (I am, incidentally, endlessly impressed by Dave's ability to figure out how to do all the stuff I want him to do. He didn't grow up learning how to do any of it; he's taught it all to himself).

Now that the power tools were safely put away, it was my turn. I had originally been thinking I'd paint this all slick and modern, in a dark gray semi-gloss, with no distressing. But then I discovered the knobs I wanted to use at Hobby Lobby and decided that distressed chalk paint would be a better match.

I picked out Valspar's High Speed Steel for the paint (and I did get it in semi-gloss, since I plan to use in on the other furniture, too, and I'm pretty sure I want the semi-gloss for the dresser) and then broke out the plaster of paris to make some of it into chalk paint.

I did two coats, lightly distressed it with a medium grit sandpaper sponge (I'm sort of terrified of overdoing it with distressing, so so far all of my distressing is "light"). Then I did a coat of polyurethane on it (instead of wax. Because I hate waxing. And because I thought the poly would be more durable). Finally, I put the adorable knob on. And here it is: 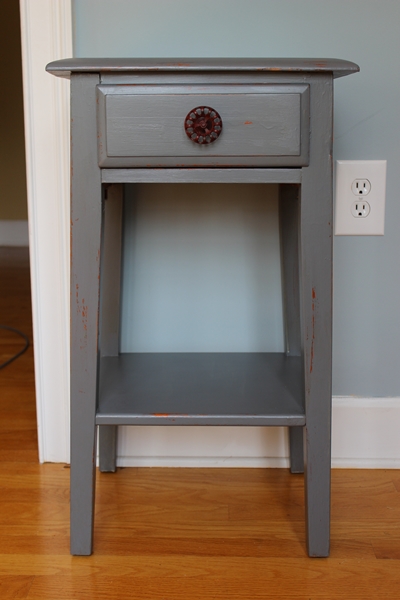 Since I didn't sand it first, the wood that shows through where I distressed it is the old orangey finish. I think it looks good with the red knob, though. 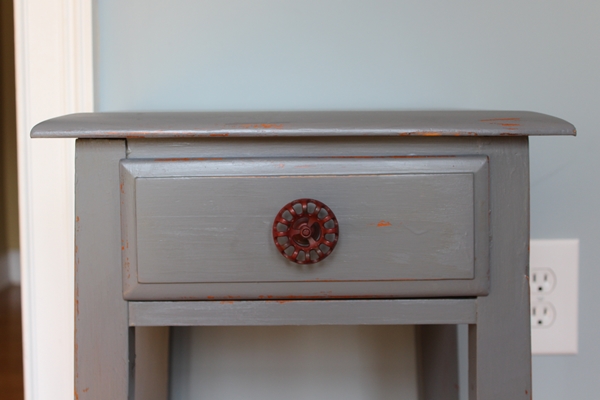 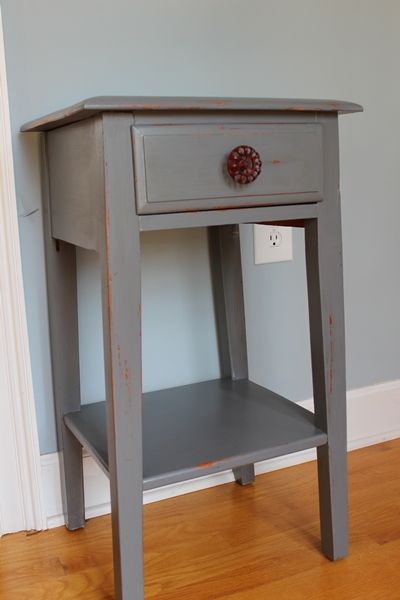