Update 2/25: My post about where to find bird and botanical images online was surprisingly popular, so I thought I'd make my new discovery about where to find lots more public domain images to print a little more prominent in this post. If you're just looking for the source for the images, scroll down until you see the fish print. But feel free to stick around and read about the rest of the gallery wall, too :)

I only made it a month after my big Last Nursery Post post (the whale) before doing another one. But, you see, this wall was looking a little sparse: 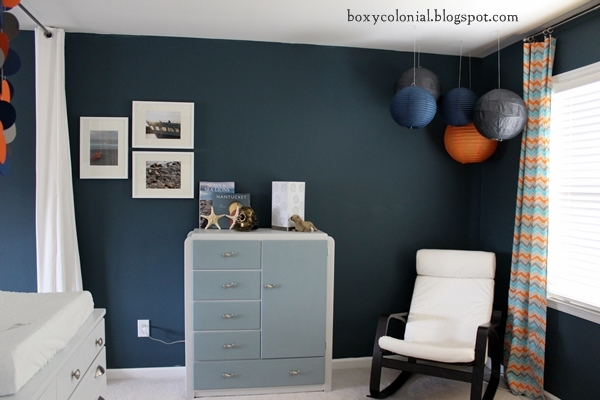 AND I had some new things that I really wanted to find a place for in there. I thought about doing another grouping on the other side of the dresser, but in the end I opted for a sort of free form gallery wall that can keep expanding.

Remember the mountain of Ribba frames I bought just a couple of weeks ago? 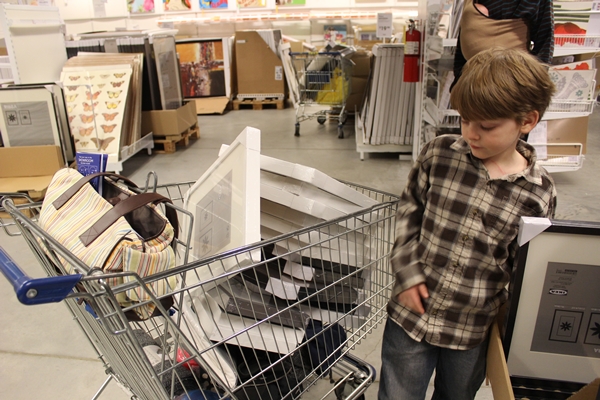 I thought we'd never run out.

But we're already out. My friend Kristi really wants this jellyfish from the Georgia Aquarium: 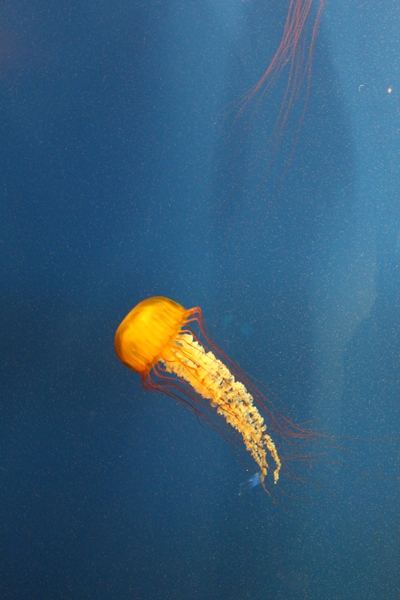 ....to live in the nursery. And, being a good friend who values her opinions, I dutifully ordered an enlargement of it and planned to hang it up. Until I ran out of frames. So it will have to wait for the next Ikea trip. Because once you use that many white Ribba frames in one room, you kind of have to keep going. Or at least I feel like I do.

So I know that what you're supposed to do when you make a gallery wall is a complicated maneuver involving outlining all the frames on paper and then hanging the paper on the wall and all that. I thought we could be far more casual than that. And we could, but it involved a lot more holes in the wall than there really needed to be had we gone the frame outlines on paper route. So I recommend doing it that way. It turns out.

I did at least lay the frames out on the floor first to come up with an arrangement I liked: 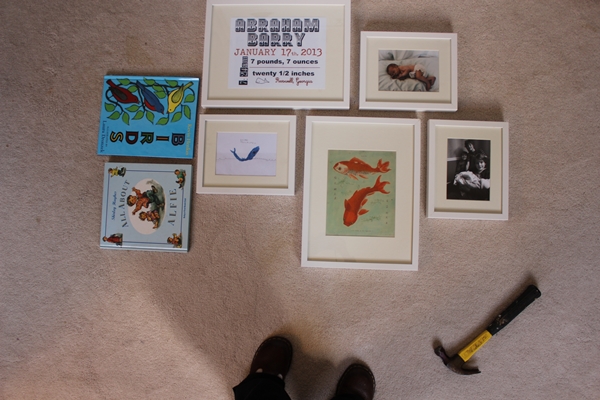 And here they are on the wall: 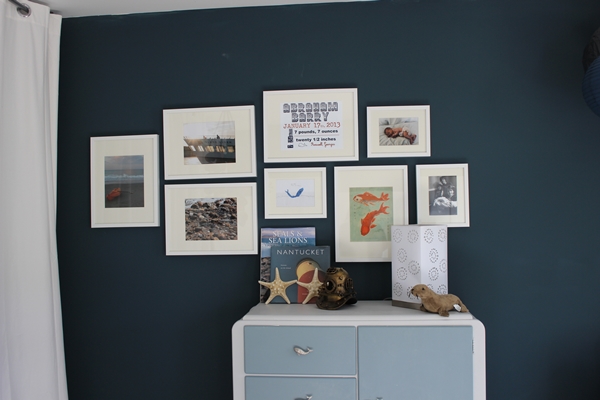 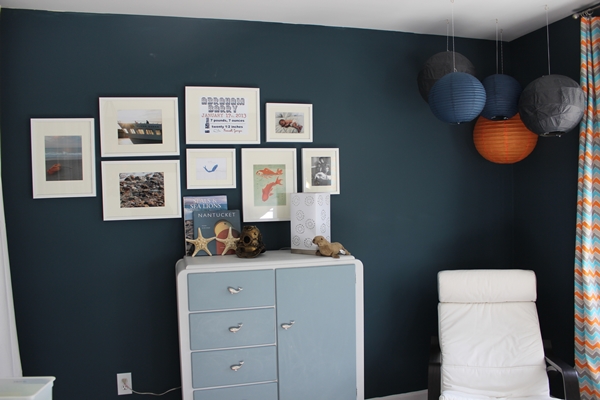 The idea is we can keep going and fill in over to the rocking chair (and maybe up and down, too, depending on how things go), but I'm liking the sort of random, not symmetricalness of it for now, too.

Taking a closer up look at the pictures: 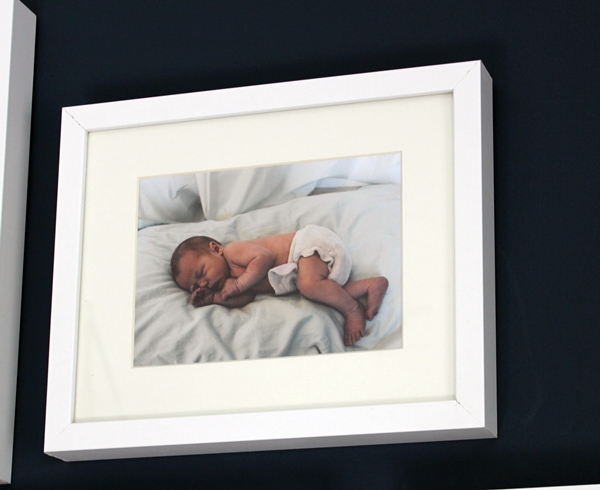 I said I needed this for the nursery, and I meant it. There's a crab I want, too. And probably lots more. This fish is from The Biodiversity Heritage Library, where you can find many thousands of beautiful images from scientific literature, all of which is in the public domain and free for you to download and print out. They even have a Flickr page where they round up the images for you so you don't have to dig through all the texts. I talk more about it and give some examples in this post.  Oh, btw, I did some reading over at The Graphics Fairy about the best way to print images for framing, and, based on the advice there, I printed this on photo paper and with the best quality printer settings. It turned out really nicely: 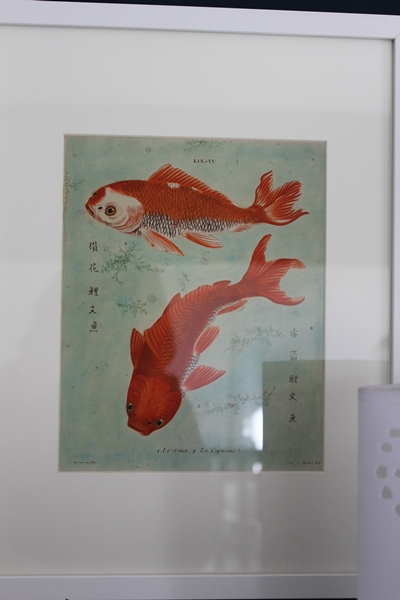 Abe with his big brothers: 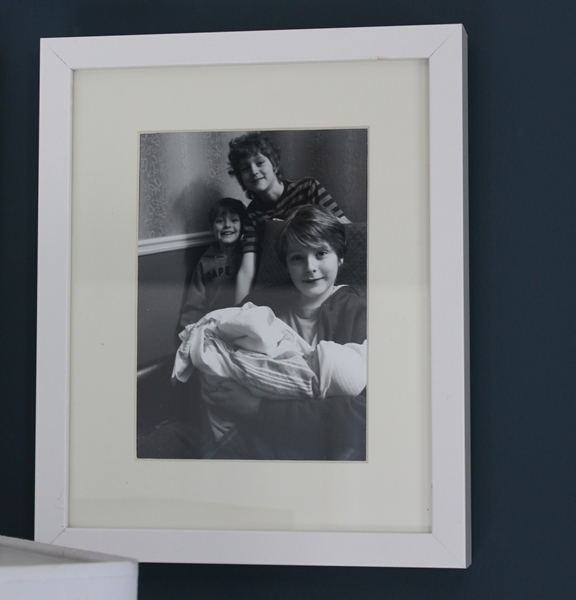 Gus drew this whale for his baby brother: 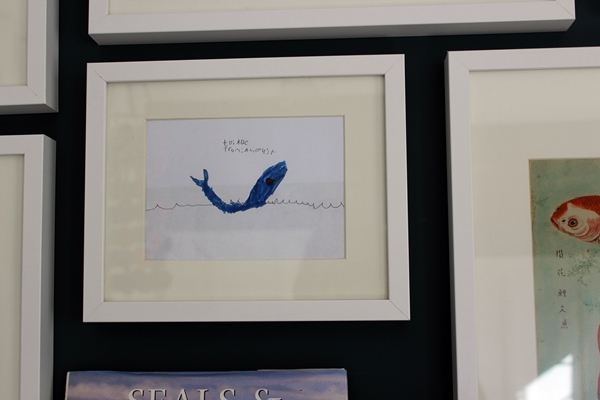 And Ari (with some help from me) made this sign: 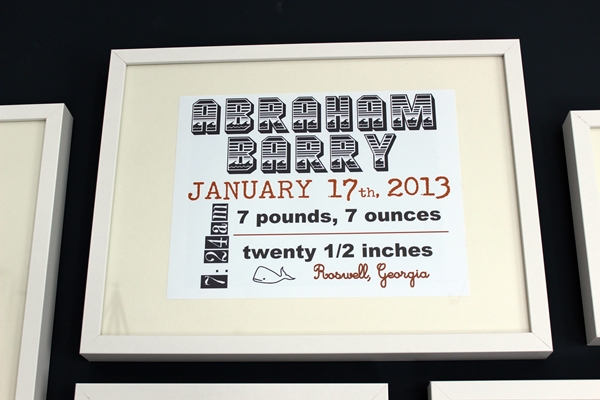 A couple of weeks ago it seems like everyone in the whole world made a subway art type sign for a nursery. Then they all disappeared as mysteriously as they came. But while all that was still going on, Ari and I got inspired and made this. Here are instructions on how to make one yourself:

1. Find an eleven year old
2. Sit at one computer looking for fonts that you like and e-mail them to the eleven year old while he sits at another computer and makes your sign in MS Paint. Probably you shouldn't really use MS Paint. I hear it's pretty sucky. But that's what Ari did.

In other words, we didn't really know what we were doing, and we totally made it up as we went along. But notice that the letters for his name have little waves across the bottom? Fun! Here's where I found that, in case you need ocean letters, too.

A couple of other little nursery additions:

We had a Target gift card, and we had to buy something fun with it to go along with all the practical stuff we were getting. So we picked up this (Nate Berkus? I think) gold sea urchin. There used to be an Alcatraz snow globe there, the sharper eyed among you might remember. It....had an accident. 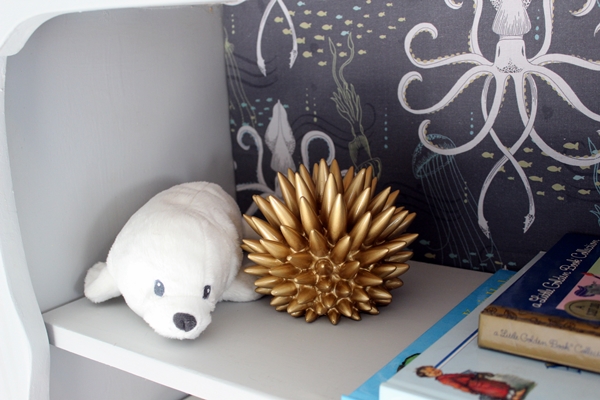 And my mom found this little whale step stool at the thrift store. Perfect for in here, isn't it? 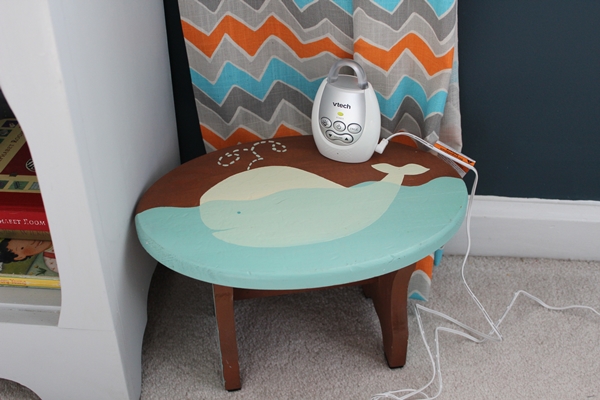 We keep the monitor on it because Abe's too little to need a step stool to reach stuff right now.

Email ThisBlogThis!Share to TwitterShare to FacebookShare to Pinterest
Labels: nursery