A Chore Chart for Free Spirits 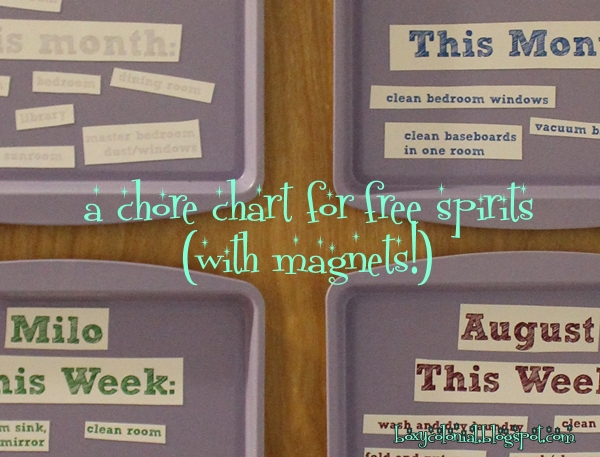 Okay, not really. A REAL free spirit would live in her van and not do ANY chores EVER. But maybe, say, you might have been a free spirit in a different life, but in this one you have four kids, three dogs, two cats, and two and a half baths in your big house, so you HAVE to clean stuff, but maybe you don't want to clean the bathroom counter every Tuesday just because your chore chart tells you to. Maybe it's Tuesday and you feel like vacuuming the living room instead. What then?!

Well. Last week I was sitting around thinking, "I really should be folding laundry." Only I didn't want to. So then I thought, "you know what's way more fun than folding laundry? Concocting an elaborate system to remind me to do laundry." And then I spent the rest of the week getting more and more behind on laundry while coming up with this chore chart.

I've made lots of chore charts for both grown-ups and kids in the past, and obviously none of them was a huge success, or I wouldn't be back here trying again. The remnants of the last chore chart, now existing mostly inside my head, were serving us fairly well for the most part. I have a list in my head of stuff we need to get done, and, when we have some extra time, I do some of it or Dave does or one of tells the kids to, and most everything gets done....often enough that no one feels the need to report us to the authorities. But I can feel things slipping now that there's an infant around. And the less frequently done tasks tend to get completely overlooked.

The idea here, the thing that's supposed to make THIS chore chart the one we stick with, is that it does not designate a particular day for a particular task. It's broken into weekly and monthly jobs and then we can do whichever one/s we happen to feel like doing, as long as everything gets done by the end of the week or month. Also it's fun because there are magnets involved.

I spent the week slowly figuring out exactly how I wanted to do it. I knew I wanted magnets to be involved and I knew I wanted things not tied down to a specific day. First I made the master list of chores. I decided not to do daily stuff because all of that is, or ought to be, pretty well a matter of habit at this point.

Once I had my list together, I stopped by Office Max and picked up a pack of printable magnetic sheets. This was the most expensive part of the project, at around $8.50 for 5 sheets (I used 4 of them).

It took me forever to figure out what to stick the magnets to. I thought about getting sheets of galvanized steel at Home Depot, then framing them out to keep the sharp edges from stabbing anyone. But that sounded like a lot of work. Then I thought, "cookie sheets!" and considered painstakingly collecting enough cookie sheets from thrift stores. But this sounded time consuming.

It finally occurred to me that this might be exactly the sort of thing the dollar store was good for, and, sure enough, google revealed countless dollar store cookie sheet turned magnet board projects. So off to the Dollar Tree I went to pick up my cookie sheets, plus a little metal basket to hold all my magnets, and a sticky hook to hang my little metal basket from. One more stop at Hobby Lobby for heavy duty double sided tape (which I had to pay the full $5 for because I'd forgotten my phone and couldn't pull up a coupon. Blast it all!) and I was all set. 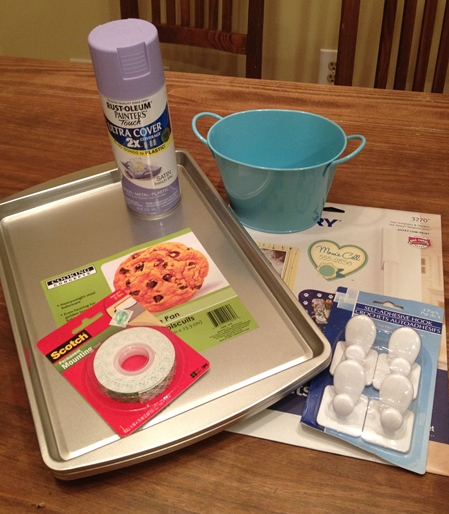 I spray painted all the cookie sheets purple with the paint I had left over from my schoolhouse light fixture. Then I typed up all the jobs and printed them out. Everyone got their own color (well, except for me and Dave. We're sharing gray): 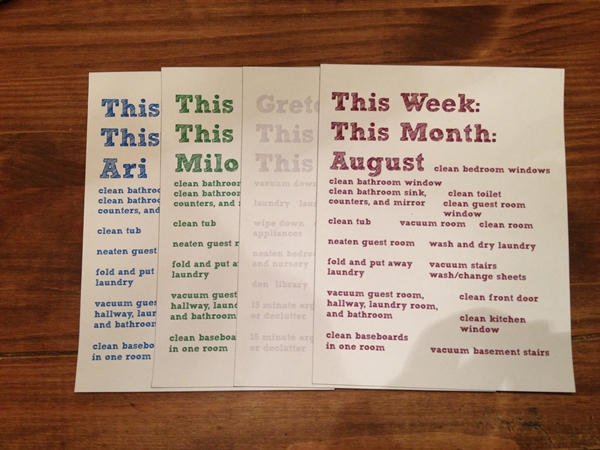 The gray turned out lighter than I wanted it to, but since the sheets are nearly $2 each, we're going to live with it for now. All the kids' pages are the same, although they won't each get every chore every week (like they clean their own bathroom, but rotate jobs: one kid does the toilet one week and then the counters and sink the next week, and so on). So I can set the boards up with jobs at the start of every week and put the right jobs on there.

I set the boards up with their magnets, put the tape on the back: 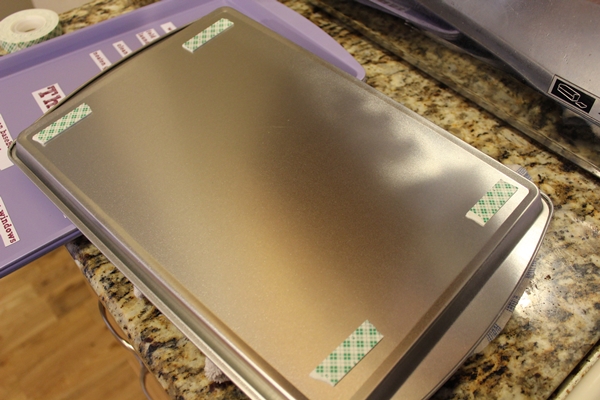 ....and hung them up. They're hanging on the wooden box that's built around our refrigerator: 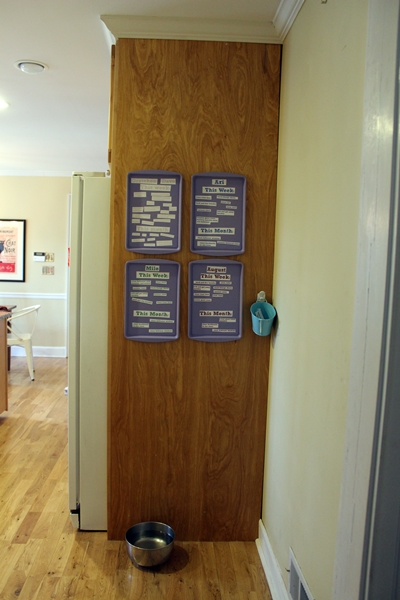 So sort of in a mostly unused little corner right off of the center hallway where our half bath is. The wall next to this, by the way, is where I'm thinking of doing a chalkboard wall. Once I had the boards all hung up, I hung up the hook and the little magnet basket. 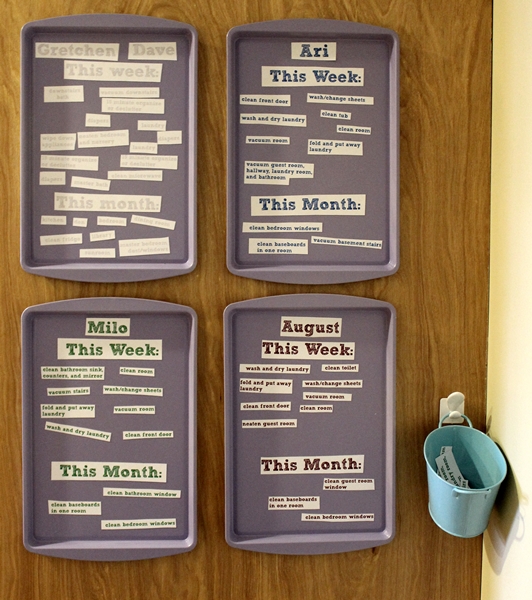 The idea is that when I say it's time to do chores (or if the mood just happens to strike) they can go pick one off the chart, do it, and put the magnet in the bucket. 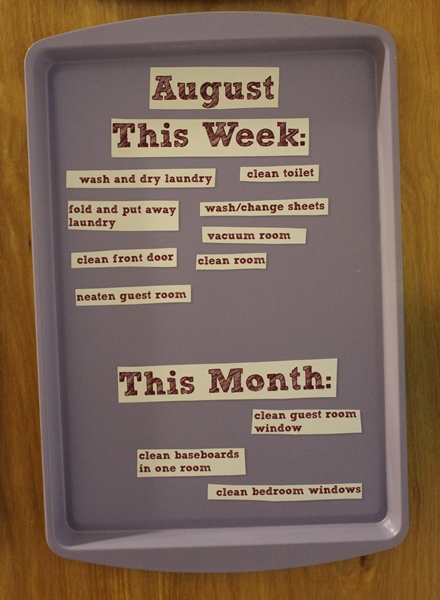 Now all that's left to do is to sit back and watch my house magically become perfect. Oh, also I have to do all those gray chores on my chart.

Update: Since I wrote this draft, the hook holding up the basket has fallen down a dozen times. I cannot recommend the 4 for a dollar adhesive dollar tree hooks. I'm going to buy a name brand one, and I'm confident that will fix the problem.

Clean It Challenge Link Party
Monday Funday
Under the Table and Dreaming's Sunday Showcase Party
TwelveOEight's Pretty Things Party
Tutorials and Tips at Home Stories A to Z
Posted by Gretchen at 7:59 AM