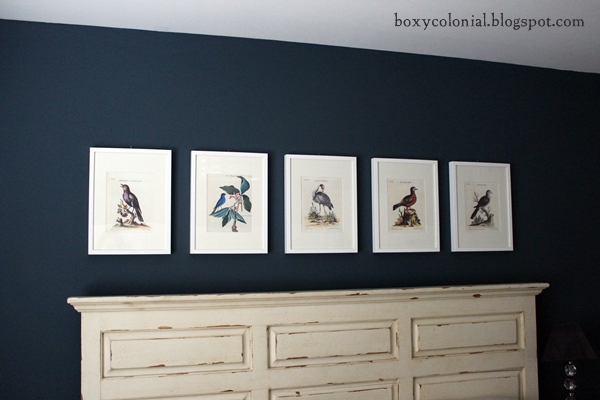 I've had a link to the Botanicus Digital Library bookmarked for quite awhile now. It's a project from the  Missouri Botanical Garden Library to digitize scientific literature and make it available on the internet. Some of the texts they've digitized have really pretty pictures in them. Probably they had loftier goals than beautifying people's walls in mind when they started the project, but, well....when you put free pretty things on the internet, that's what happens, right?

I can't remember where I first came across it, but there are lots of examples out there of people using prints from the site, mostly from this book of plants. I like the plants but, when I decided I wanted some bird prints for my bedroom, I went back to the site to see if they had any to offer. And they do!

There is, for example, The natural history of Carolina, Florida, and the Bahama Islands: containing the figures of birds, beasts, fishes, serpents, insects, and plants: particularly the forest-trees, shrubs, and other plants, not hitherto described, or very incorrectly figured by authors. Together with their descriptions in English and French. To which are added, observations on the air, soil, and waters: with remarks upon agriculture, grain, pulse, roots, & c.

That one has some lovely birds in it, but this is the one I used. I have no idea how I found it, actually. It doesn't come up when you search "bird" because it's in Dutch (I think). But I have it saved on my hard drive, so I found it somehow. Lucky you, if you're looking for bird pictures and don't know Dutch! A surprising number of the pictures feature birds devouring insects. Eww....maybe educational, but not pretty! But there are plenty of birds untainted by references to their unappealing diets, too.

I did print out some plates from the plant book for Milo and August's room. I used brown cardstock....not entirely sure how I feel about that choice, but I can always change it out later. These projects, by the way, are what part of our mountain of Ribba frames were for. 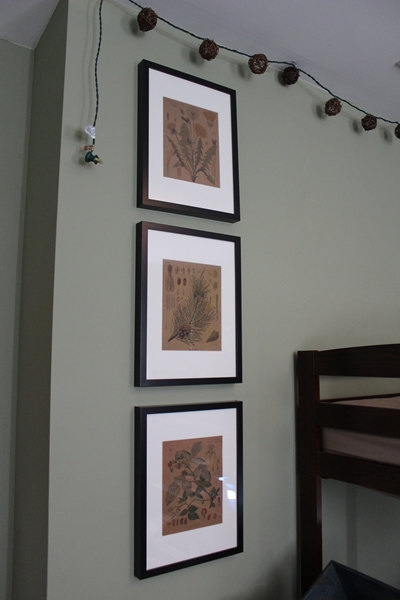 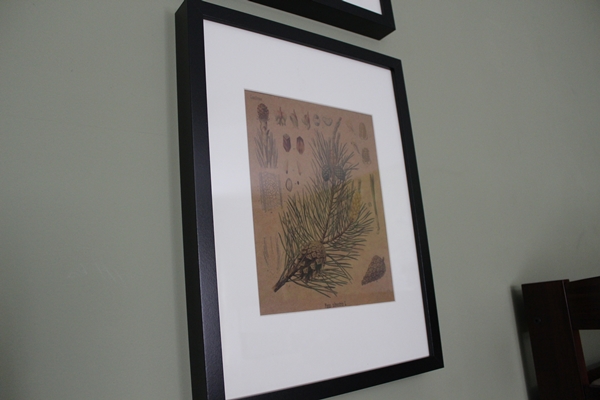 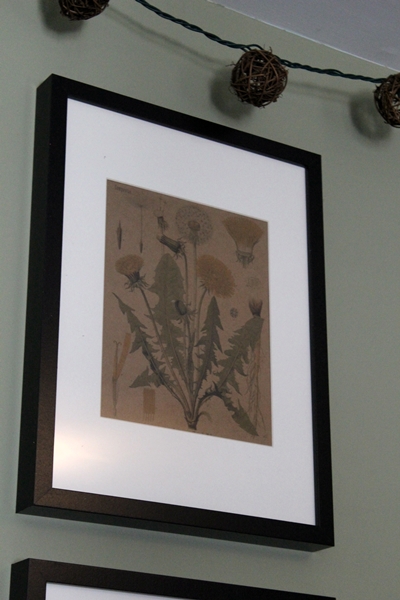 They got dandelions, raspberries, and some kind of conifer thing.

And then we moved on to birds. Had I had a girl (ha! right! like that would ever happen!) I was thinking of a vintage-y nursery with birds. But since I'm still the only girl around here, I get the birds (and Dave gets to share them).

I wanted to hang them all in a row above the bed. Dave pointed out that this would be more or less impossible (or at least beyond our humble picture hanging abilities) with the wire hangers that come with the Ribba frames, because getting all the wire exactly the same on each frame would be....tricky at best. So we attached little picture hangers like this to each frame instead (first drilling pilot holes, then nailing them). We talked our moody printer into printing five bird prints out for us (we used white cardstock this time) and put them in the frames. 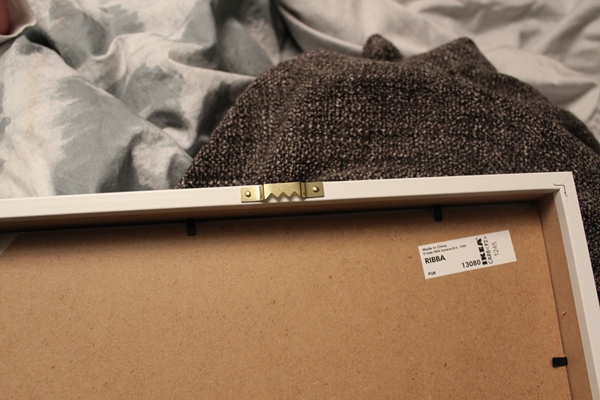 We used a level and hung up a line of frog tape to help get everything nice and straight. Then figured out the spacing and made marks on the tape for the nails: 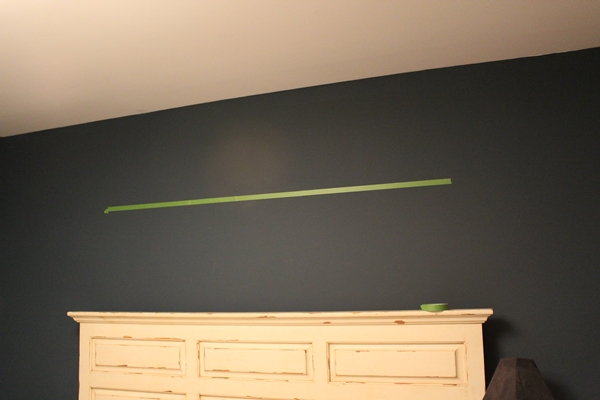 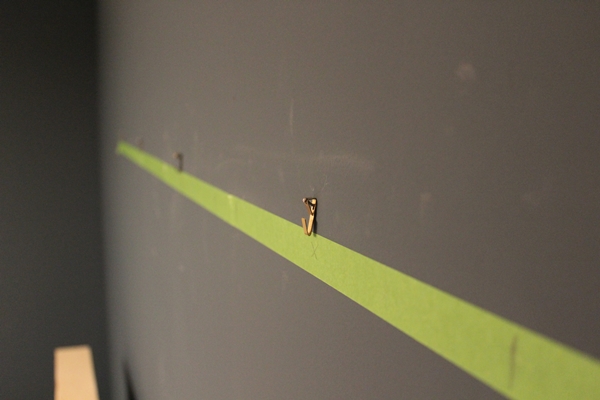 Then the tape came down and the pictures went up!

Here's the realism version of how our bedroom looks now: 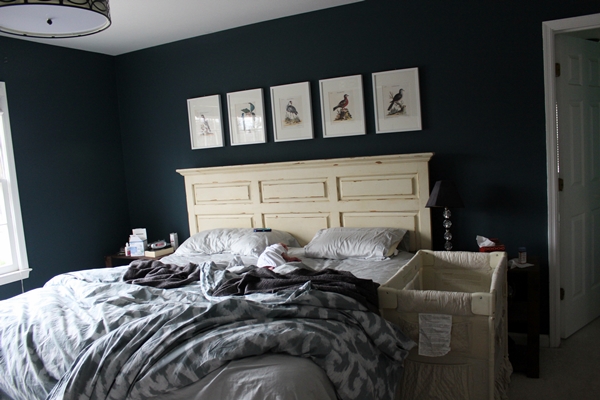 Can you spot the baby?

And here's after I made the bed and moved a bunch of crap out of the shot: 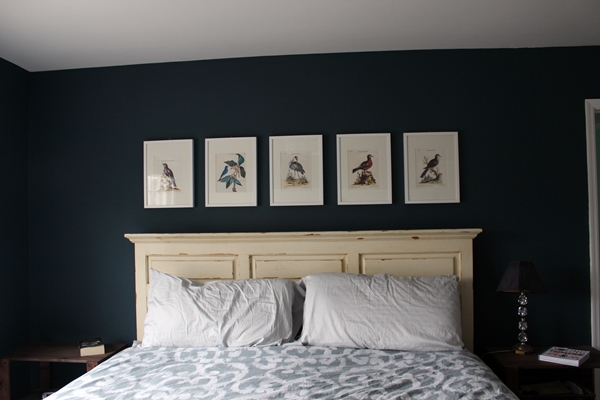 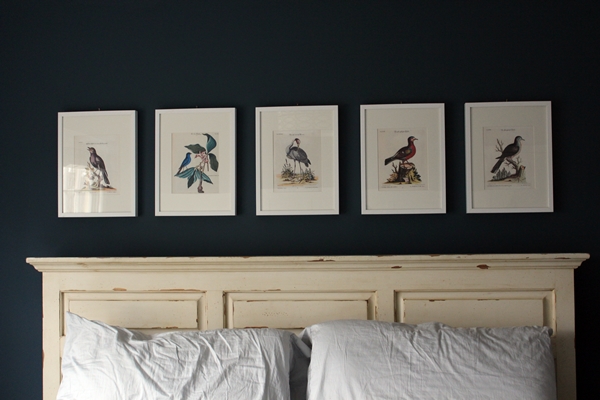 I think this purple guy is my favorite: 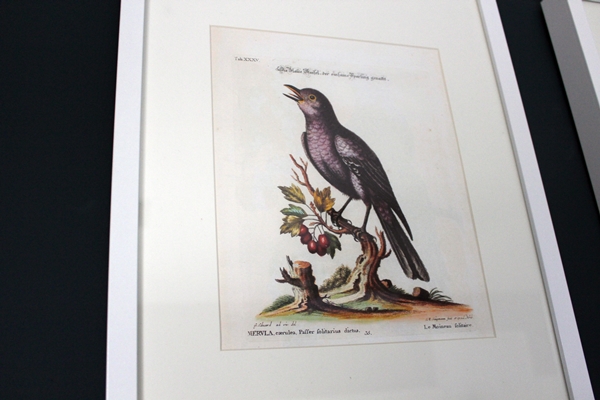 And I'm not sure about this blue one. But, again, easy to change! 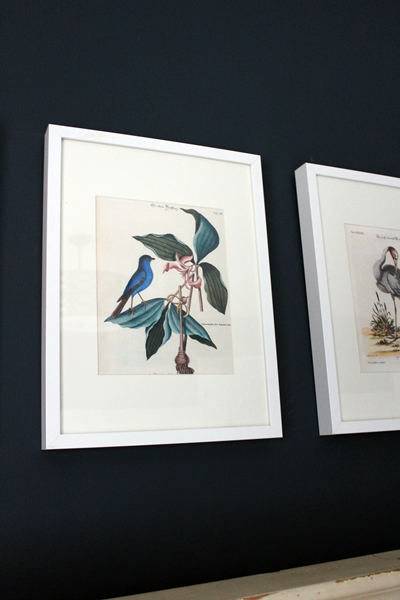 I'm also still (again?) totally conflicted about whether to paint the headboard gray or not. I do not love it with the duvet cover. But I like it fine with everything else, and I'm sort of terrified of screwing it up if I try to paint it. What say my readers?