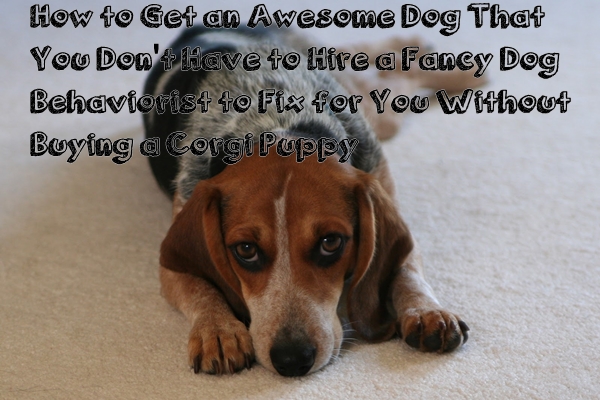 If you would like a house-related post, I could blog about how I managed to wash a rug today and dust the library. No? Okay, how about a bit about dogs then?

I have had four dogs in my adult life, and they've all been rescue dogs. First there was Oliver. I got Oliver from the animal shelter when I was 20 and he was a teeny tiny puppy. Here we are, both of us very young: 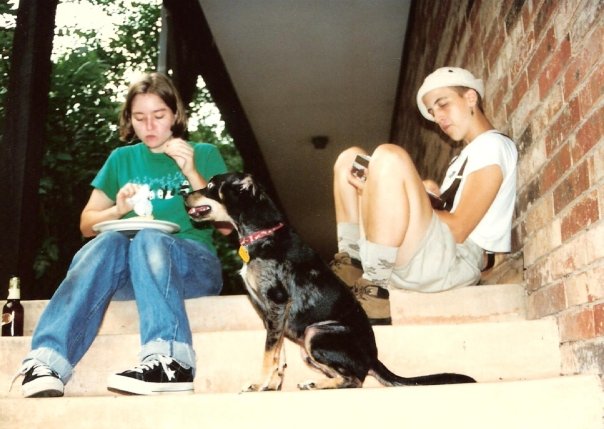 That's me in the panda t-shirt. Oliver is the one who's a dog. And the other person is my friend/former roommate Suzanne.

Here is Oliver when he got a lot older: 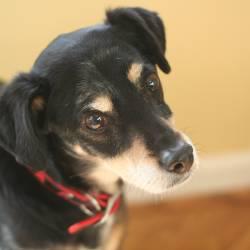 Oliver was the best dog ever. I was that obnoxious person who brought my dog to parties. I took up jogging just so Oliver would have a hobby. Oliver's obedience teacher said of him, and I quote, "He's obviously VERY quick and VERY bright, and you can see that in everything that he does." Yes, I memorized it, because I was so, so proud. Oliver is the reason Dave likes dogs. I got Ollie just before meeting Dave. Dave had never had a dog; when I told him about Oliver he said, "he's going to stink; all dogs stink." But then he loved Oliver. Because: greatest dog ever.

Let me preface this next part by saying that I love all of my dogs very much.

The next two dogs were....not like Oliver. They are lovely dogs in many ways, but they both have their share of issues. 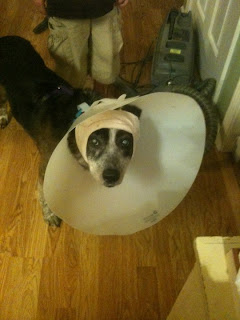 Sorry, Lucy; I picked a pathetic, unflattering picture of you. This is when she had her second ear hematoma. Poor dog. No one talks about how quick and bright Lucy is, although she is. Instead they say things like, "sometimes a wire just gets crossed somewhere" (her obedience teacher) and, "this is the most interesting case of dog inter-aggression I've ever seen" (expensive dog behaviorist #2). But, let me reiterate: we love Lucy. She's 14 1/2 now. She's been around for a LONG time. 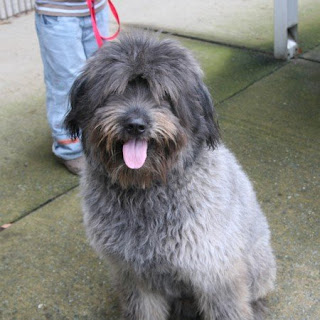 Right? We couldn't leave HIM at the shelter. Gable is less....complicated and mysterious than Lucy, but he still has his problems. He gets testy at times. He steals things off my counters. Etc.

So I was one for three with rescue dogs, and I was starting to feel like a cautionary tale. I was ready to say to hell with it and buy a Corgi puppy next time we got a dog. (I had a list of dog requirements....good with kids, other dogs, cats, and chickens (we had chickens at the time), and can't reach the counters. I narrowed down my list of acceptable breeds to: Corgi).

We weren't planning on getting another dog until Lucy died, but I was already feeling kind of guilty about wanting to buy a Corgi instead of getting another rescue dog. I mean, the dogs in the shelters DIE if no one adopts them. I know; I wrote a report about it in 7th grade. What would my 7th grade self have to say about this whole Corgi buying plan?!  But then, fate intervened and presented an alternative. And now I am here with a handy tutorial: How to Get an Awesome Dog That You Don't Have to Hire Fancy Dog Behaviorists to Fix for You Without Buying a Corgi Puppy.

For reasons that I can't explain, I started getting itchy about getting another dog last summer....even though I knew I was going to be getting a new baby--almost as cute as a puppy--in January. This worried Dave a great deal. So much so that, after a trip to the Humane Society where I made him try out puppies, he agreed to let us foster dogs. If we fostered dogs, we would not get a puppy. This was the idea.

I picked a rescue organization called Angels Among Us mostly because it was local and wasn't focused on a particular breed. I wanted mutts (or Corgis). Our first foster dog was named Cocoa. She was very, very timid, not great with kids, but immediately became very attached to me. We had her for a few weeks, and then she found a great home with a family with high school age kids (they also adopted her sister, with whom she'd lived her whole life until their owner had to give them up and they went to separate foster homes).

So, with one positive fostering experience under our belt, we were ready to move on to the next dog. I got an e-mail asking if I would take a little beagle who had just had puppies a few weeks before. The puppies had just been weaned, and they were going to stay in the current foster while their mom moved on to a new one. Sure. I told several people that there was no danger I'd be tempted to keep this dog because, "I don't even like beagles."

The kids and I went to pick up Fiesta. We got to meet her adorable puppies. We brought her home. I took pictures of her and wrote up a nice description for Petfinder. I wrote it from Fiesta's point of view, even though that made me feel goofy, because people seem to like that sort of thing. 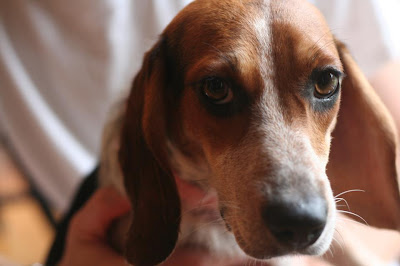 Fiesta had been picked up as a stray, very pregnant, and taken to a high kill shelter.  Here she is in the shelter with her giant belly: 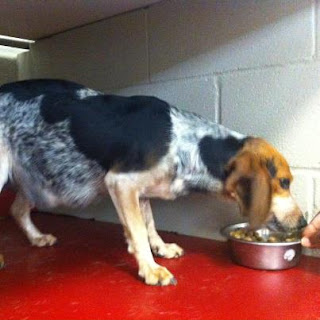 Angels Among Us pulled her out of the shelter, and she had her seven puppies not long after.

Fiesta had pretty much all of the traits I thought I didn't like in beagles. She didn't come when you called her if she had something better to do. She sometimes got loose and ran (I was used to dogs I couldn't lose if I tried). She could never, ever be trusted off of a leash. And we were completely charmed by her anyway. She was an excellent cuddler (but--bonus!--not a licker).  She loved everyone. She wore Gable out encouraging him to run big sweeping circles with her in the yard. She was amazing with the kids. She wanted us to be happy. Before long, she won everyone over. 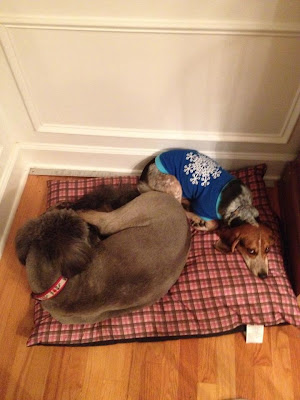 But then we caught Athena the grumpy cat cuddling with Fiesta: 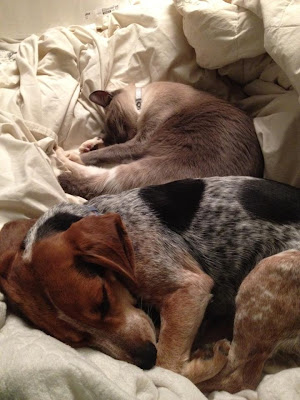 And then Lucy?! AKA "the most interesting case of interdog aggression I've ever seen" 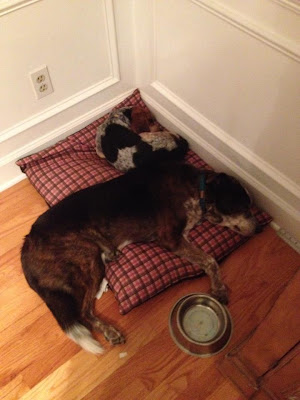 It was official. There was no one with whom The Beagle would not cuddle.

But we were just fostering. We didn't want another dog. I dutifully took Fiesta to adoptions on the weekends. And then....I found myself getting sort of offended when people didn't adopt her. What was wrong with people?! Couldn't they see how clearly perfect Fiesta was?

And, at the same time, I was starting to approach adoption days with dread. I couldn't believe she wasn't already adopted; she was little and cute and friendly and I had written an adorable description of her in the first person for Petfinder--it was just a matter of time. Every Saturday might be the last time we ever saw her.

I finally brought it up with Dave. "Do you think we should keep Fiesta?" He was surprisingly open to the idea. And that was all it took. The decision was made and I e-mailed Angels to find out what we needed to do next (which was filling out an adoption form and sending in a check for the adoption fee; we had already done a home visit before we started fostering, so everything else was set).

And, just like that, the best little beagle in the whole world was ours to keep.

To sum up, here is a step by step tutorial:

1. Call up a rescue group and start fostering dogs
2. Do that until you happen across one that you can't live without
3. Keep that one.

I feel kind of bad that keeping Fiesta meant not fostering anymore for now (three dogs is my absolute limit).  But once Lucy is gone we will probably be ready to start again.

The main thing we've learned through our brief but satisfying fostering stint, though, is that we'll never adopt a dog again without fostering first. We got to see Fiesta's personality (and annoying quirks) and could tell she'd be a good fit for our family before we committed to her. If we hadn't kept her, she would have been adopted by another family, and all would have been well. And I can't imagine that we could love even an adorable Corgi puppy as much as we love Fiesta (not to mention that, while not cheap, Fiesta's adoption fee was considerably less than a Corgi puppy).

One note: some rescue groups look negatively on (or even outright forbid) adoptions by foster families. I guess the reasoning for this is that once someone adopts, they likely lose them as a foster family (which is, indeed, what happened with us). It seems to me that it's better to have someone foster one or a few dogs and then adopt one than never foster at all. Angels Among Us has a very positive view of "foster failures."  So just a note of warning to make sure that the group you work with is open to foster families adopting (I would make sure of this even if we didn't go into it with the intention to eventually adopt (which we didn't, officially, this time). Just in case).

We've had Fiesta since August, and we're thrilled that we kept her. If we hadn't, this never would have happened: 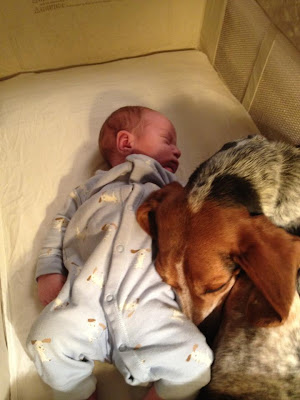 And a postscript: the other day the woman who fostered Fiesta and her puppies before we got her posted on Facebook a picture she'd received from the people who adopted one of Fiesta's puppies. Here she is, 7 months old: 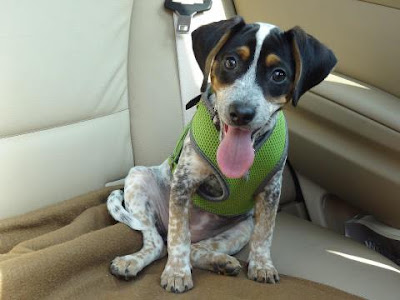 It's like a Fiesta with terrier ears! I think you'll agree that we showed amazing restraint not ending up with one of those puppies, too.
Posted by Gretchen at 11:09 AM