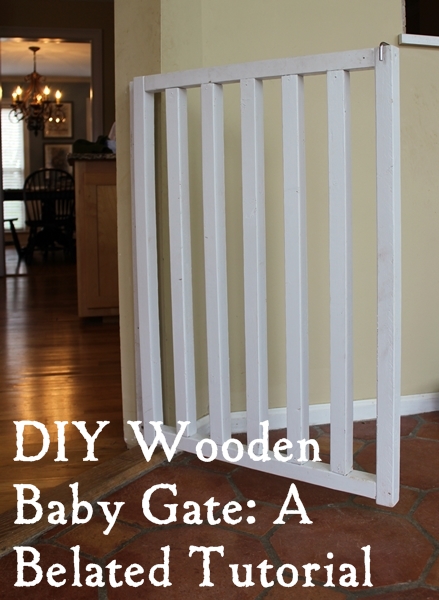 Special guest blogger today! Dave! The baby gate he made a few months ago is one of my most viewed and most pinned posts. Sadly, when people view it, they see some cruddy pictures of the gate and....no real information about how to make it. We've been meaning to get the how to make it post up for forever now. The other day someone finally commented on the post to ASK how to make it, and that was, it turns out, just the motivation Dave needed to make some pretty diagrams and write it up. So here you go!

Many moons ago, Gretchen posted about a baby gate that I made to keep dogs (mostly Gable) out of the kitchen.  You can read about it here.

Every couple weeks, she asks me when I'm going to write out the instructions on how I built it.  But because I never really considered it complete, and because I'm a big procrastinator, it hasn't gotten done until now.  It's been 95% complete since October, but the hook and eye latch we bought to keep it locked never really worked.  Any toddler would be able to shake the gate with his tiny fists and pop the hook out of the eye.  For that matter, any moderately curious or determined dog could do the same.  Fiesta the Beagle is one such dog.  Fortunately, Gable the Dopey is not.  While he's a big enough problem dog to require us to build a specialty gate to keep him out of the kitchen, he's a dog of routine and appreciates having his own sun room retreat during eating times.  But with a new baby in the house, I knew we would need something a little more secure in the future, so I finally found a suitable latching device.  So now I can explain the whole process.  Lucky you!

So the reason we needed a custom-built gate is because the doorway is crazy narrow, specifically 26.25 inches.  It was formerly part of the kitchen bay window, but was opened up to a do-it-yourself addition of a sunroom by some previous owner.  Since no commercially available gates come in sizes so tiny, I set to work on plans of my own.  The Home Depot had these super cheap untreated 2x2 pine posts - so I bought enough of these to make the following gate: 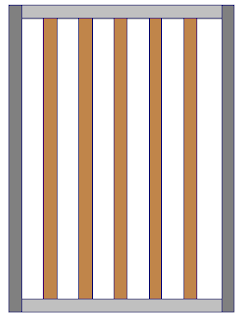 So in case you don't know, lumber measurements don't actually match their name.  If you buy a 2x2 post, you'd think that you're getting 2 inch by 2 inch posts.  Nope.  It's actually 1.5 inch by 1.5 inch posts.  That means that the skinny dimension of each of those rectangles is 1.5 inches, in case you're keeping track.

The vertical dark gray 2x2s are 35 inches long.  This is the height of the gate and is completely customize-able.  I think I picked that height because it meant I had minimal leftover wood.  It's pretty tall for a gate, but Gable is a pretty big dog, so it works out.  The horizontal light grays are 22.25 inches long.  Add the 1.5 inches on each side for the vertical posts and you get a total gate width of 25.25 inches.  "But Dave, you said the doorway is 26.25 inches wide.  Why is the gate 1 inch too narrow?"  More on that in a moment.  Since the vertical brown 2x2s are contained within the horizontal posts, they needed to be 3 inches shorter than the exterior vertical dark grays, so they come in at 32 inches a piece.

After careful measuring, remeasuring, conferring with Gretchen, and measuring again, I sliced up the posts using the Skil saw and sanded all the pieces with the power sander.  I used fourteen 2-inch deck screws to attach all the pieces together.  I was either smart enough or made enough mistakes in the past to know that if predrilling was important to avoid splitting such narrow pieces of wood.  So each light gray post got five screw holes and each dark gray post got two.  If I were smarter or had made more mistakes in the past, I would have used wood glue as well.  While the screws were holding the posts in place, they made for a nice point of rotation for each of the brown posts.  Instead of taking everything apart to add the glue, I decided to use some finishing nails hammered at 45 degrees to create more points of connection between the light gray and brown.  While that worked OK, the hammering jarred the alignment off on some of the posts.  So you can feel the not-flush adjoining on some of the posts.  It bothers me literally every day of my life.

Now that the gate was complete, I had to attach it to the doorway.  I didn't want the hinge screws to go directly into the drywall (there is no wooden door frame as there was never a door there) because I didn't think that would hold the test of time and dogs and boys.  So instead, I used some more wood - this time 1x2 (so in actuality 0.75 inches by 1.5 inches) - cut to the length of the gate height.  More predrilling and deck screws attaching this new piece to the exact middle of the 6 inch wide drywall, and I was ready to attach the two hinges into nice sturdy wood.  This is, by the way, where the extra 1 inch of width came from.  The 0.75 for the wood, and the rest for the hinges and for a little leeway on the other side of the gate.

Speaking of the other side of the gate, there needed to be some sort of door stop to prevent the gate from getting pulled past where the hinges and hinge screws wanted to go.  So I used another 1x2 board and attached it to the other side of the doorway.  This time, it wasn't exactly in the middle because I wanted to allow the gate to close flush with the first 1x2.  Maybe this diagram can explain better than words.

This is an areal view - the light and dark grays are the top of the gate (color coded!) and the green and purple pieces are the hinge board and the door stop respectively.  While the first diagram is to scale, I had to shorten the width of the gate in this one in order to show the relevant details without making a crazy long image.  If this diagram really were to scale, the doorway would be a little more than one foot wide, which is just crazy.  In real life, the doorway is a little more than TWO feet wide.

So all of this worked great, except for the previously mentioned battle with the hook and eye.  We tried various configurations and angles to try to make it more secure without much success.  It got to the point where the hole the hook screwed into was so stripped that we would routinely find the hook lying somewhere on the floor.  In fact, I looked for the hook just today and was unable to find it.  What good timing that I finally bought a latch that will work! 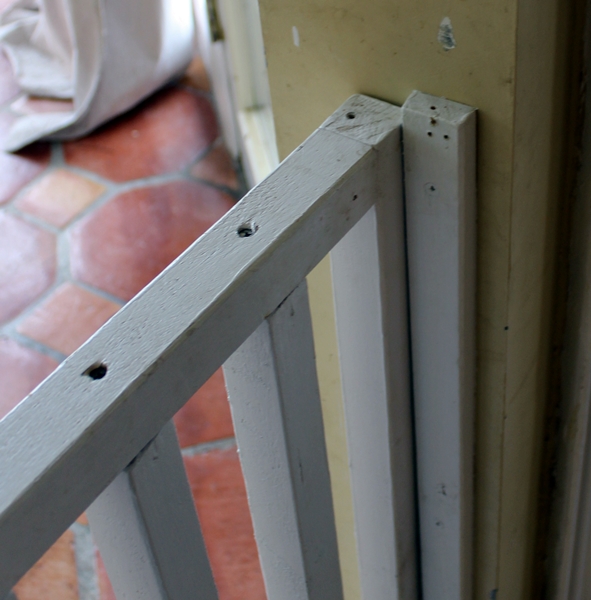 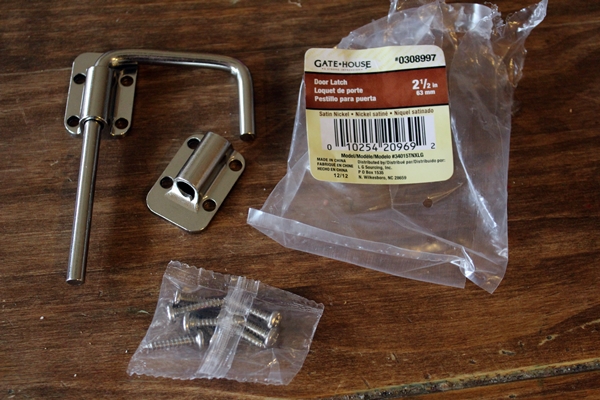 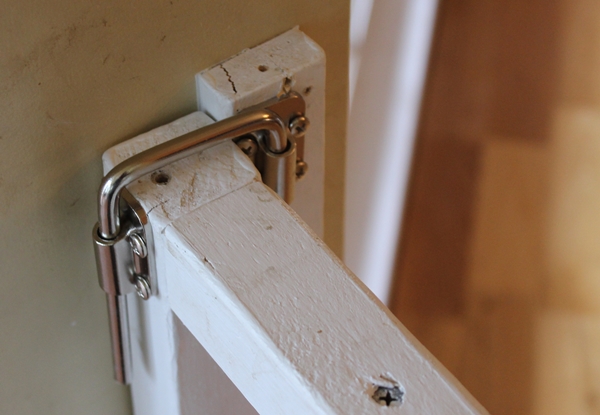 This should work great for two significant reasons.  One, the "hook" part goes deep into the "eye" part, so it won't jiggle out with excessive toddler fists or beagle paws.  Two, each piece is attached by four screws into wood (the gate for the hook, the doorstop for the eye).  This should really stay put.  Oh, it's worth noting that my previously mentioned smarts and/or experience took a hiatus when I screwed this latch into place.  I did not predrill screw holes and there are now small cracks in the wood that I hope will stay small.  This will likely bother me literally every single day for many years to come ... or until the gate breaks. 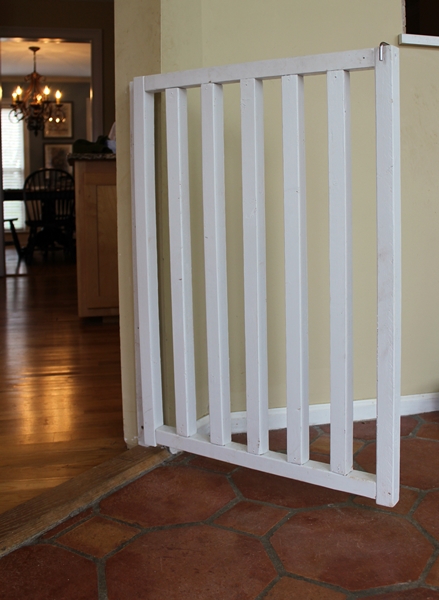 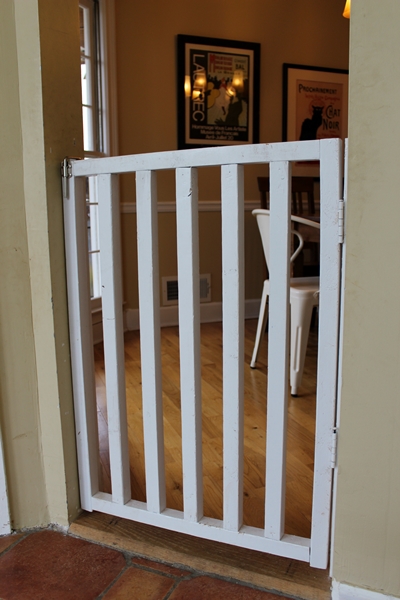 Linking with:
Sunday Showcase Party at Under the Table and Dreaming
Tutorials and Tips at Home Stories A to Z
Stone Gable's Tutorials, Tips, and Tidbits
Hookin' Up With House of Hepworths
The Inspiration Gallery
The Shabby Nest's Frugal Friday
Tatertots and Jello Weekend Wrap-Up Party
Monday Funday
Posted by Gretchen at 8:00 AM