3D Lego Art for the Ever Expanding Nursery Gallery Wall

Taking a break from Easter decorating while some paint dries to bring you the latest addition to Abe's gallery wall. Remember how I said that Milo was the only brother who hadn't contributed anything to it? We made quick work of remedying that situation.

One of the kids got a Lego mosaic kit for Christmas a few years ago. It was a big hit for awhile, but it hadn't seen much use lately...in fact, I was the only one who firmly remembered its existence. I suggested that Milo pull that out and make something for the wall, thinking it would be pretty easy to mount and frame it.

I hope that this post doesn't make anyone too excited about the Lego mosaic kit, because apparently they don't make it anymore, and getting ahold of one might set you back $114 or so: 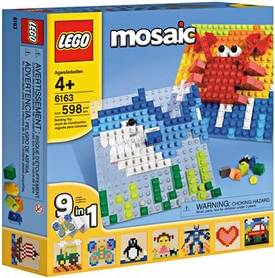 We didn't pay that much.

So as you can see from the box, there are a couple of ocean animals that one can make with one's Lego mosaic set. Milo decided on the shark. We had long since lost the directions, but we were able to find them on the Lego website and download them.

I know this post's usefulness is limited by the fact that they don't make Lego mosaic anymore, but pretty much all the kit is is a bunch of 1by1 pieces in various colors (there are a few specialty pieces, too), a clear baseplate, and instructions. It would be pretty easy to either download the instructions and replicate the results or to make your own design.

Milo set to work in his room and came down not long after with his completed creation: 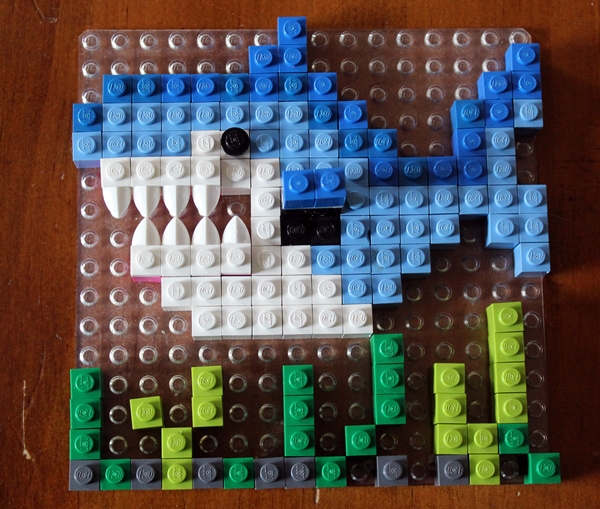 On that Friday night thrift store trip where I bought many bunnies, I picked up a cheap gray frame that I thought would work well to spray paint and use for the shark. For the background, I used a piece of cardstock left over from Abe's mobile.  Then I picked up some white spray paint at Hobby Lobby the next day, and I was ready to go: 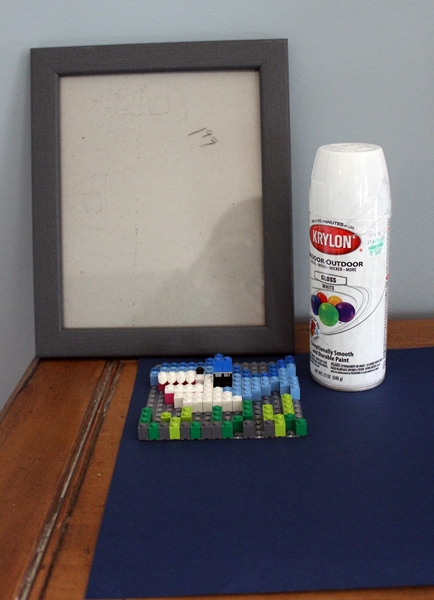 I ran into some trouble with the spray painting. The frame was some kind of cloth-like material, and it was really hard to get good coverage on it. There was one corner that, weirdly, was absolutely impossible to make white--the gray bled through no matter how many times I sprayed it. I think the lesson here is "when in doubt, use primer." Once the spray paint dried and it still looked iffy, Dave went over it with some white latex paint and a brush. 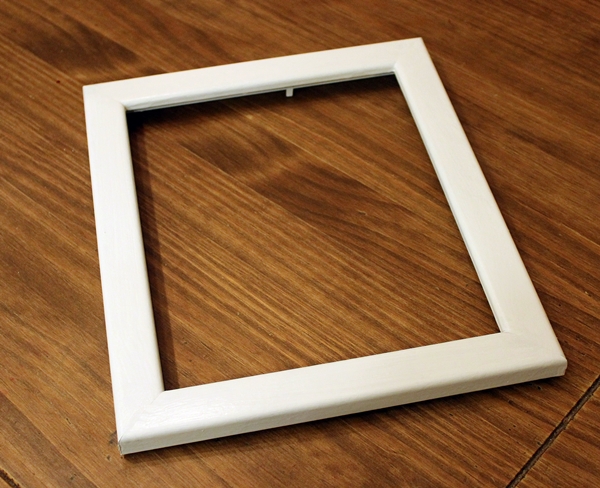 I traced around the cardstock and cut it out to fit the cardboard back from the frame: 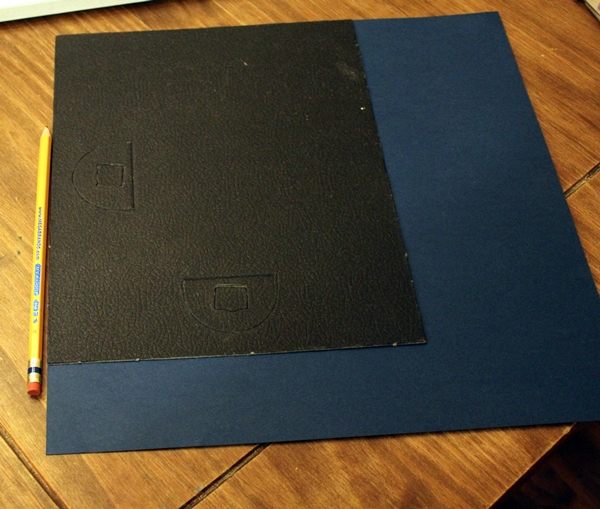 Then I attached it with double sided tape.

I used the heavy duty double sided tape to attach the Lego plate. I realized when I started doing this that I was limited in where I could put the tape since the base plate was clear. But it all worked out: 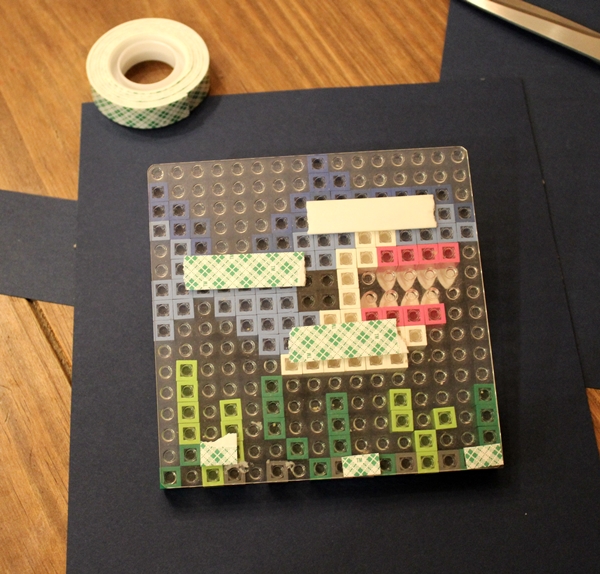 And then I used the same tape to attach the frame to the wall! This is my new favorite thing. It was so incredibly fast and easy, and it hasn't fallen down yet!

Here's the gallery wall with its newest addition (I've finally departed from the Ribba frames, and I think it works okay. As long as they're all white and rectangular): 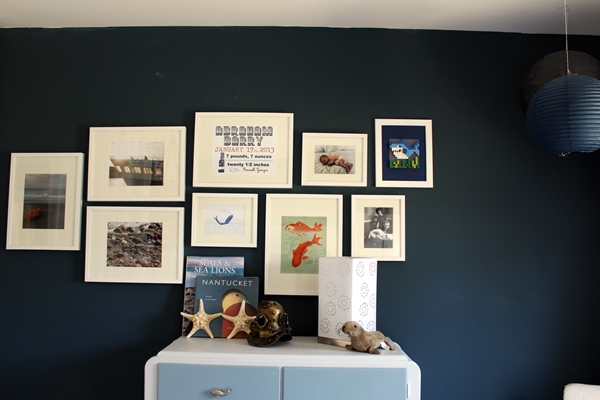 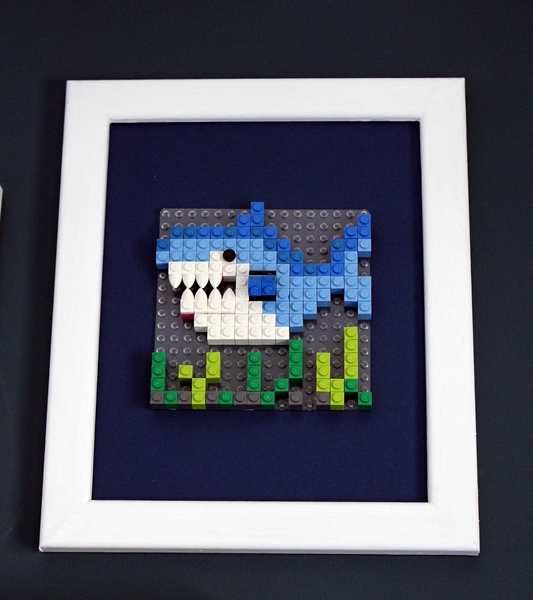 Linking with:
Monday Funday
Classy Clutter's Spotlight Saturday
Under the Table and Dreaming's Sunday Showcase Party
Tuesday's Treasures at My Uncommon Slice of Suburbia
Tutorials and Tips at Home Stories A to Z
Stone Gable Blog's Tutorials, Tips, and Tidbits
Transformation Thursday at The Shabby Creek Cottage
Hookin' Up With House of Hepworths
Craftionary's Friday Link Party
Inspiration Gallery
Tatertots and Jello's Weekend Wrap-Up Party
Posted by Gretchen at 8:00 AM