Maybe Mondays are better anyway, because that's when I can actually remember what happened over the weekend. I'd like to do weekly recaps here, since this blog has swallowed my homeschool blog, and I like to have some family life documentation for future nostalgic purposes/grandparents/et. al. So feel free to skip and come back when there's house stuff. But if you do stick around, I promise to try to make it worth your while with things like pictures of babies in popcorn buckets.

I'm developing a bit of an Instagram problem. I really like the idea of having a photo diary of everyday stuff (as opposed to occasional stuff that I decide is important enough to drag the big camera along for). And those fancy filters make me think all my pictures are fabulous! Until I see them bigger on the computer, and then they look.....grainy. But, you know....grainy like old times! Old time pictures! So, anyway, I apologize for my overindulgence to those of you who follow me on Instagram (and to those of you who don't and are now scared to start, it's not THAT bad....I mean, it's not 100 pictures a day or anything). 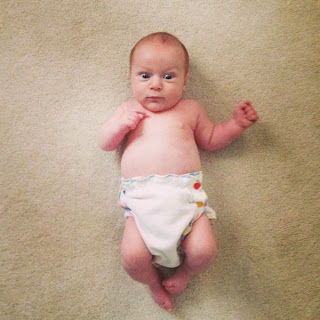 He spent less time doing this: 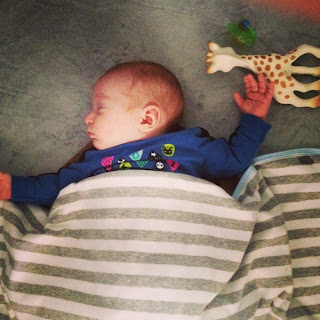 We're working on, and having some success with, getting him to sleep in his crib for awhile at bedtime. But daytime naps are another story. Here's what happens about 5 minutes after scenes such as the one above: Abe wakes up the second his diaper is wet and yells until I come get him. Then he grunts at me angrily until I put him on his changing table under his beloved mobile. Then he begins smiling and cooing adoringly at the mobile. This sounds like: "ahhhhhhhh. ahhhhhh. gahhhhh!" Which I think means, "Oh, mobile, how can you be so impossibly wonderful and endlessly fascinating? My mother claims to have made you, but I think you must have been formed in heaven and sent here to make me happy."

Abe went to his first movie: 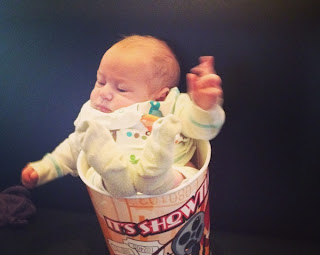 It was Wreck-It Ralph at the dollar movie. He did fine during the movie, and I rewarded him by subjecting him to the humiliation of stuffing him in a popcorn bucket for this picture. You're welcome. 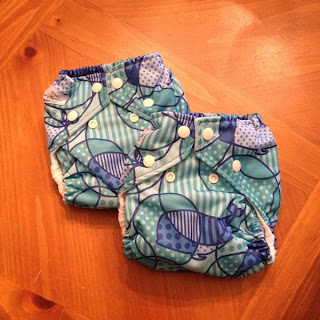 His whale Fuzzi Bunz arrived today. Now he has the cutest bum in the world. I'm hoping increasing our supply of pocket diapers (with fleece to wick water away from his skin) will help with that whole "wakes up the instant he pees" problem.

Related to whales (somewhat): Dave's sister, Amy, bought Abe a set of nautically-themed onsies (because of his nursery, you see. People seem to really like buying him nautically themed things). One of them says "Capt. Cutie" on it. As soon as we put it on him, we couldn't stop calling him Captain Cutie. Eventually other nicknames spun off of this wildly, so that now we might call him "The Captain" or "Captain Brambarry." I was delighted by this nickname and how it is both hilarious and related to his nursery. And THEN! I remembered about Walt Whitman's "O Captain, My Captain" which, in addition to being in Dead Poet's Society, is about.....Abraham Lincoln! And a boat! OMG! It all fits together! We gave our baby the best name EVER!

Abe waited for Gus to get out of rehearsal (wearing the Babylegs I discussed a couple of weeks ago): 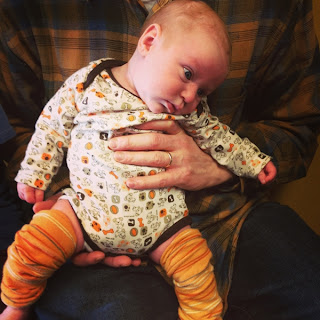 About 10 seconds after I took this picture one of the other parents who was waiting said jokingly, "did you come straight from the hospital?" Apparently he's still pretty little. People are always saying, "you forget how little they are!" when they see him. No one ever said that about my other, more giant, babies.

Speaking of Gus' rehearsal(s), he had 8 1/2 hours of Aladdin rehearsals between Friday and Sunday. He was very tired by the end of the dress rehearsal on Sunday. But still excited: 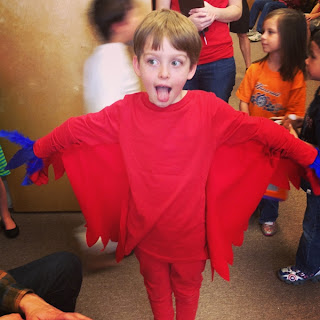 He's Iago. So after his 2 1/2 hour rehearsal, we made him walk to get frozen yogurt. Menchies is about a mile and a half from our house, and the place where Gus is doing Aladdin is (more or less) on the way, so we walked over to get him and then walked to Menchies together: 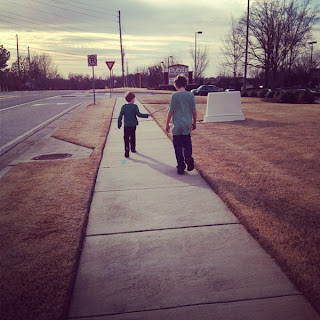 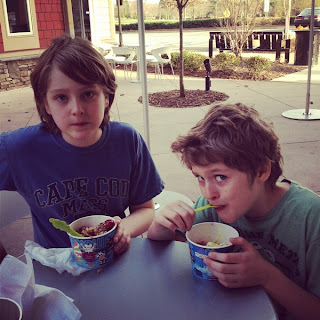 What else happened this week? Why, let me consult my Instragram pictures and see!

Ari went to Momocon, a family friendly Anime convention, with some friends. Everyone dressed up except him, but he did at least wear a Hetalia T-shirt: 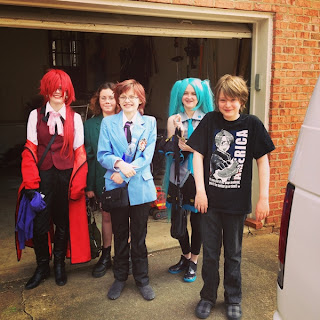 All I could get out of him about how it went was:

Milo's latest Lego Master Builder kit came in the mail, an event that always results in a an afternoon in which I do not see Milo for hours: 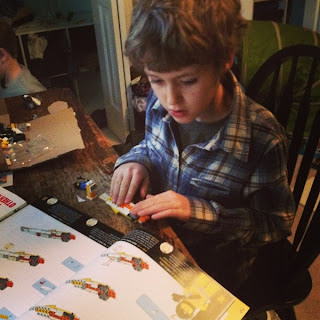 And while Ari was at Momocon and Gus was at rehearsal, we dragged the two remaining boys to Home Depot (where we bought the fixings for TWO upcoming projects!) Milo was bored: 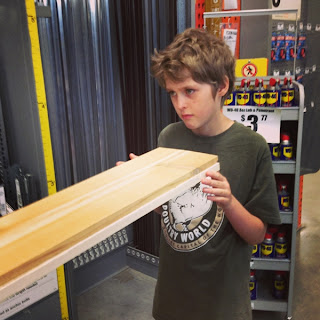