I think there's some sort of ancient proverb that says something like, "She who starts 14 projects all at once at the beginning of the weekend will have trouble finishing even one of them by the end of the weekend." Yeah. Back on Friday, I was very proud of my ambitious plans and all the stuff we were going to accomplish.

I know it doesn't look like 14 things, but it turns out I forgot to narrow down "Easter stuff" at all, and it turned into....lots of things.

Saturday morning, we tore right into the list and got out the lamp I bought months ago at the thrift store (along with a shade from Target), intending to paint it and use it on the desk in Milo and Gus' room. At some point we discovered that the switch was broken, which set us back even farther while we put off picking up the stuff to repair it. But Saturday morning we were ready! Whoo hoo! 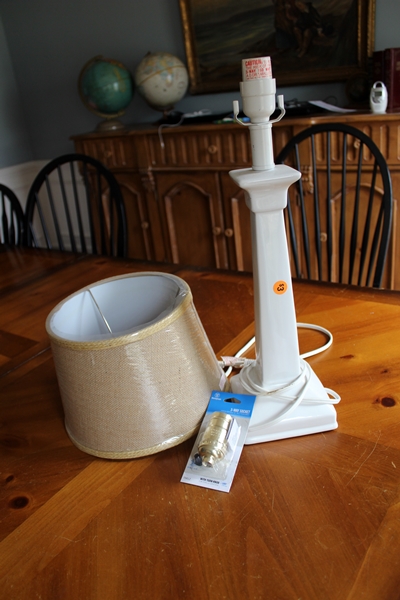 See? All the stuff is right there! Ready! 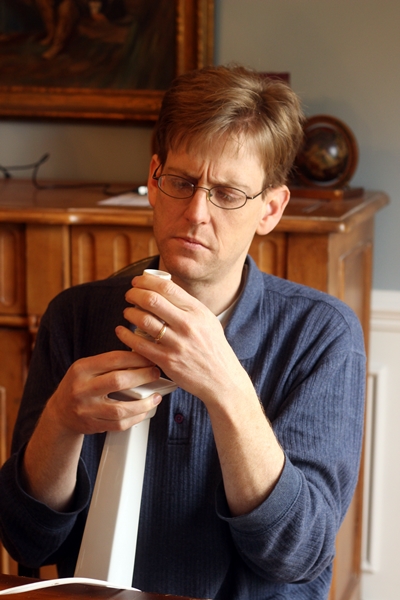 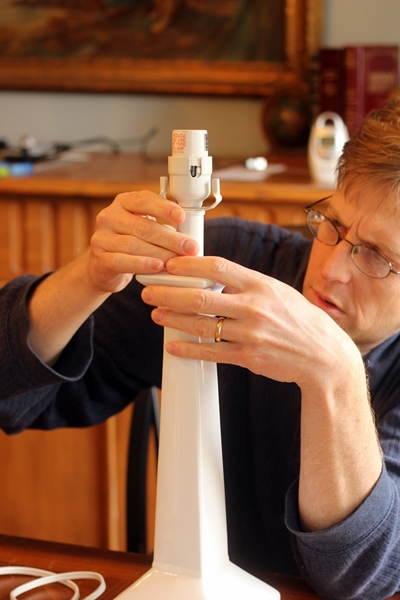 Basically, Dave couldn't figure out how to get the lamp apart to fix it. The bolt holding stuff together is way up at the top of that tall, skinny ceramic base, and, he said, even if he could get it out, he didn't know how he'd ever get it back together again. If anyone has any ideas, please let us know.

Okay! So! Moving on!

Ari's dresser. We actually did make progress on this. Dave sanded it down and painted it and we got started on its secret transformation. But it turns out paint dries more slowly than I would like for it to, so it's going to be awhile before we can finish it and blog about it.

That leaves us with...Easter stuff. By my count, there are two more posts coming about Easter stuff, but today I have bunnies. I will warn you in advance that I don't think there's anything Craftgawker worthy here. But there are bunnies, and that really ought to be enough.

Friday night we went to the same thrift store where we got our big heavy dresser (half off!)  right before they closed for renovations. They've been back open for a few days now, so I wanted to check out all the new fancy there. They have all new shopping carts! With wheels that actually turn! So that was exciting. I was so excited about the new shopping carts that I loaded mine up with, maybe, too many things. Maybe. But everything was 20% off! And there was a walrus bottle opener for 99 cents (or more like 80 cents after the discount, but he was totally a bargain already at 99).

Among my finds were four of the six bunnies I'm going to talk about. 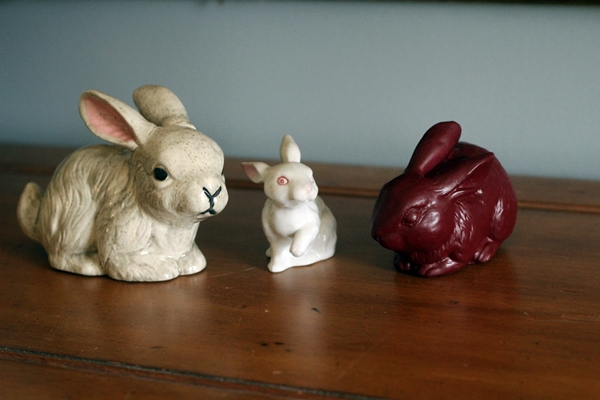 The bunny on the left--that sort of depressed looking one--is the one I got Friday. The other two were already here. The red bunny was in the den, and the little bunny in the middle has been stuffed into a drawer for the past 8 months or so. Poor bunny. 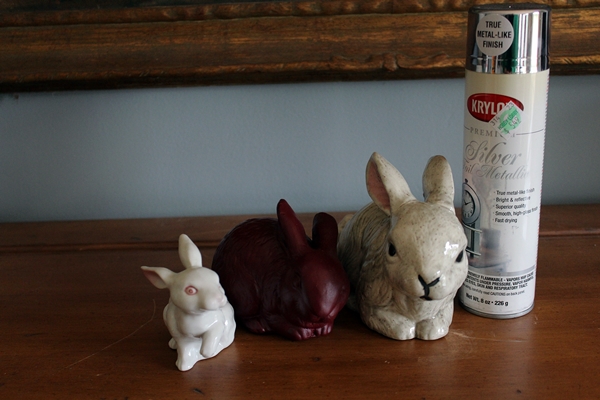 If the bunnies look a little more excited in this picture, it's because they're about to undergo a dramatic transformation, courtesy of that can of Krylon Premium Silver Foil Metallic paint with "True Metal-like Finish."

I was pretty impressed with this stuff. As soon as I started spraying, the bunnies looked all shiny and metallic. I did a few light coats, but I'm not sure I really needed more than two. SO shiny!

Incidentally, I am declaring silver and dark purple the new Easter colors. Down with pastels!

Okay, so here they are in all their shiny glory: 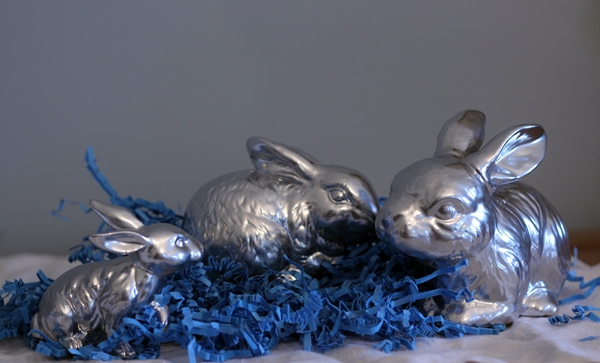 And the other three bunnies?  Just as I was about to check out at the thrift store Friday, I spotted these three wooden bunnies hanging out. Dave pointed out that they would be pretty easy to make with a jigsaw, but they were $1.29 each, so it really seemed best to just get these and give the jigsaw a break. 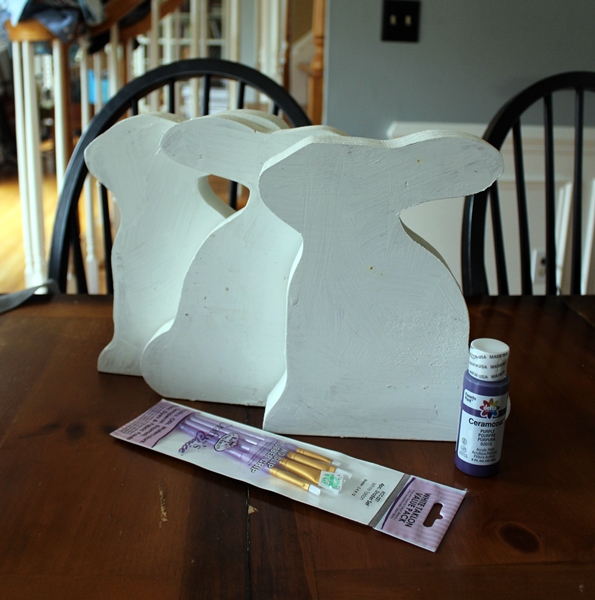 One of my big Easter decorating plans was to have letters spelling "new." I'd originally thought of buying freestanding cardboard letters from a craft store and painting them, but when I saw the wooden bunnies I decided they would be the perfect conduit for my letters.

I thought "new" for Easter/spring was kind of clever and fresh, but no one in my family seemed to get it. This conversation happened over and over all weekend:

member of my family: what are you spelling on those rabbits?
me: new
momf: why?
me: for Easter...you know, rebirth, new life, brand new fluffy baby chicks,  and all that
momf: (blank look) oh.

In retrospect, I should have sanded these down and started over with the paint, because the paint job was looking pretty rough. But what I actually did was just put a fresh coat of white spray paint over them.

Dave and I spent a ridiculously long time trying to figure out how to print out some letters to use for a guide. We didn't want to use up all the ink to just print them filled in black, but, after many minutes of effort, we couldn't figure out how to turn them into outlines. So, in the end, I just printed out the letters on cardstock (arial black, size 500), cut them out, and traced around them with pencil. 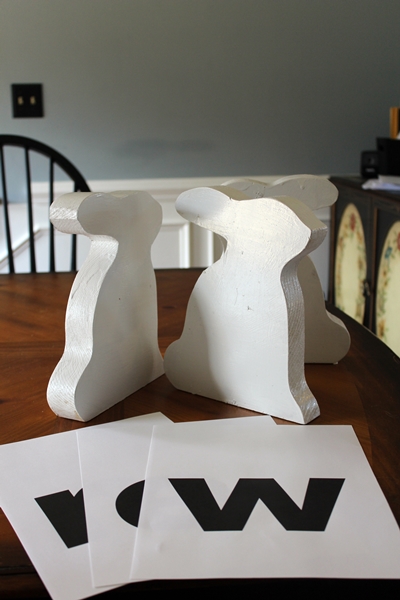 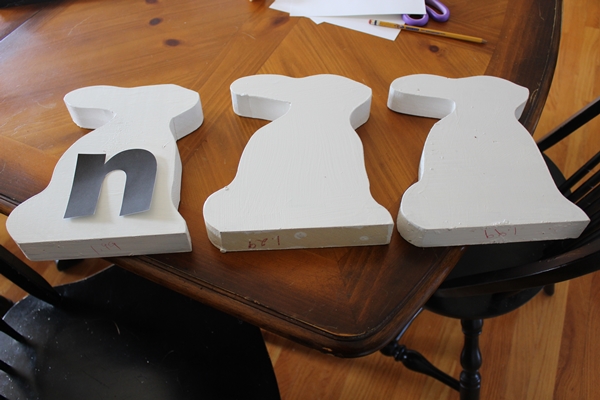 The "w" was too wide for the bunny, so I redrew one, the same height as the other letters but skinnier: 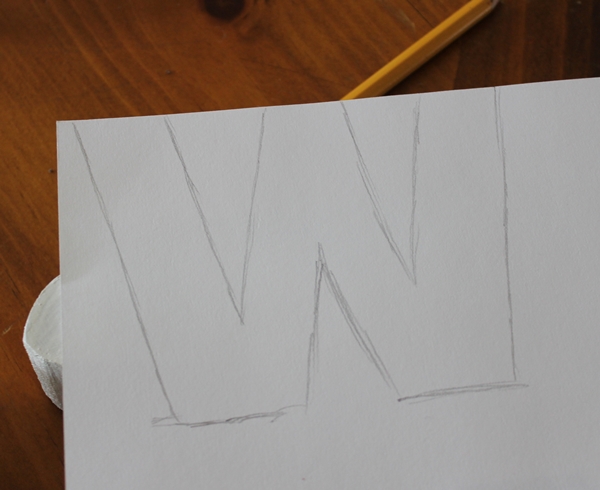 Then I filled in the letters with purple acrylic paint and a little craft brush: 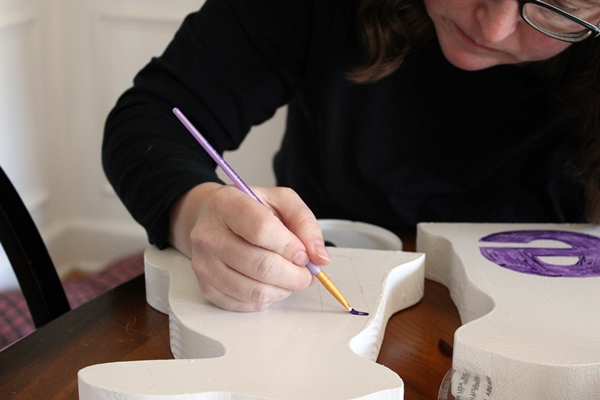 Here it is after one coat: 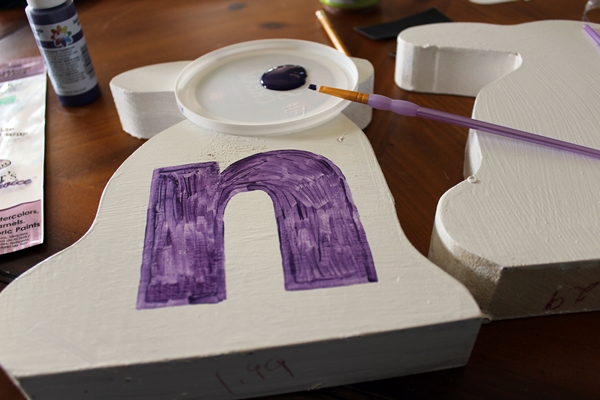 Comparing one coat with two: 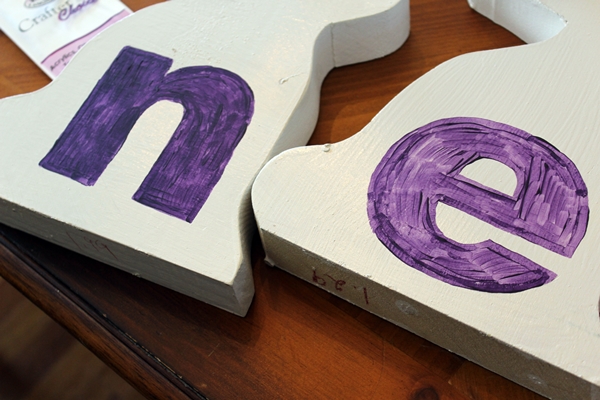 I wound up doing three coats before I was happy with how dark it was. I wonder if I should have stuck with the more expensive acrylic paint from the art section that I had picked out but put back in favor of the cheap stuff in the craft section. 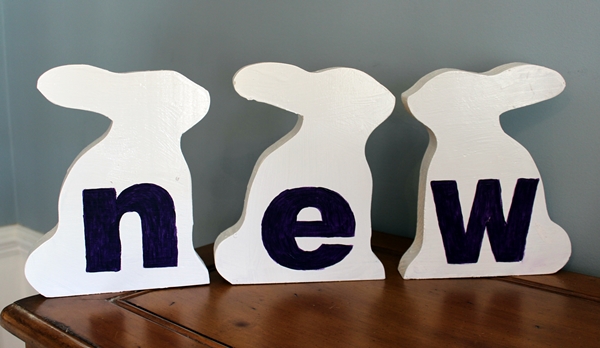 (I put a lot of thought into which way the bunnies would be facing. I almost made them all face the same direction, so it wouldn't seem like one bunny was left out, but then when I lined them up to look at them, I liked them better this way. Instead of two bunnies talking and ignoring the other bunny, try to think of it as N bunny and E bunny out for a morning frolic and happening across W bunny coming from another direction).

Then I got all the bunnies together for a big bunny party/photo session: 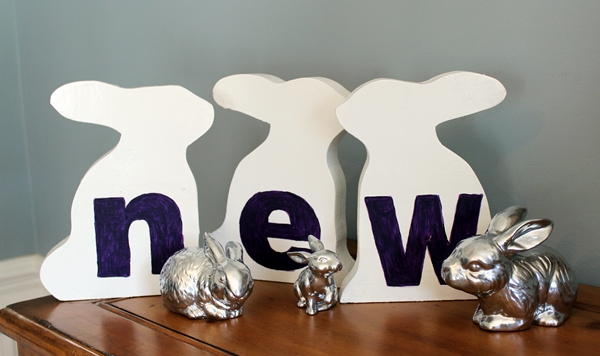 What's going on right now is that I have all these Easter projects flooding in and no idea where to put them all or how to arrange them. Let's hope that gets better as the week progresses!

Linking with:
Tutorials, Tips, and Tidbits at Stone Gable Blog
Hookin' Up With House of Hepworths
Somewhat Simple
The Inspiration Gallery Link Party
The Shabby Nest's Frugal Friday
Tatertots and Jello Weekend Wrap-up Party
Posted by Gretchen at 8:00 AM