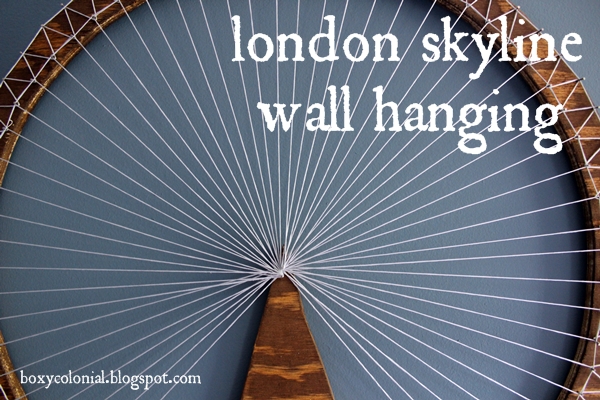 It's an Indigo Girls reference. Get it? In a bit of poor timing, I had Strange Fire in the disc changer in my car for awhile just before I did this project, and now I can't get that song (or at least that line) out of my head.

I came up with the idea for this project one day while I was in the shower, which is, historically, where I get all my best ideas (I used to compose entire paragraphs of papers there when I was in grad school. Of course, the problem with composing paragraphs in the shower is that you have to memorize them and keep them in your head until you get to a computer). The thought process went something like this: "hmm....maybe a skyline of some sort for Ari's wall? Like the thing from the beginning of Frasier...the outline of Seattle. But not Seattle. Where? Atlanta? Because we live here? Boring. Paris? Eiffel tower? Too hard. ......London? London Eye! Yes! Also with string!"

This was back when we were first starting on Ari's room makeover, and I've spent a lot of time since then fretting that the end result would not match the vision in my head. I dealt with this anxiety by putting it off as long as possible instead of just doing it already and getting it over with. I think it's probably good that we waited until after the big Boston map fail, though. Probably we were due for a screw-up, and I'd rather it were that than this.

And....I'm really happy with it! It looks pretty much like it did in my head! yay! Ari loves it, too. Extra yay!

I'll just go ahead and show it to you instead of making you scroll before I get to the how we made it part. I can't wait anymore, because I'm so excited about it. 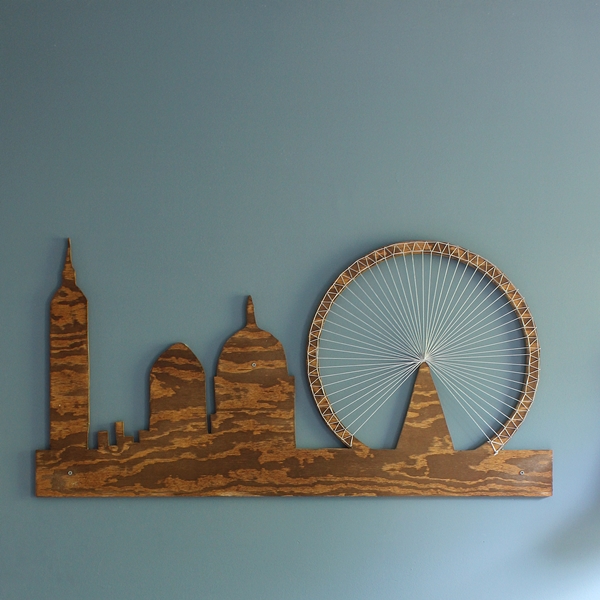 We started with the blank sheet of plywood, a picture of a London skyline stencil that I found online, and my rough sketch: 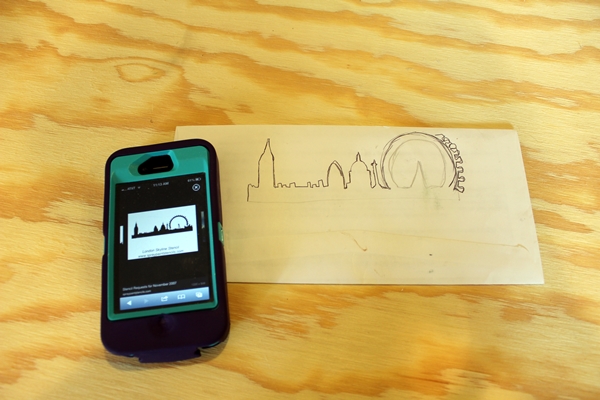 We needed too big of a circle for any circle shaped things we could find in the house (mixing bowls, pizza pans), so we hammered a nail in the center of the future circle, tied a loop of string the right radius to it, and did this: 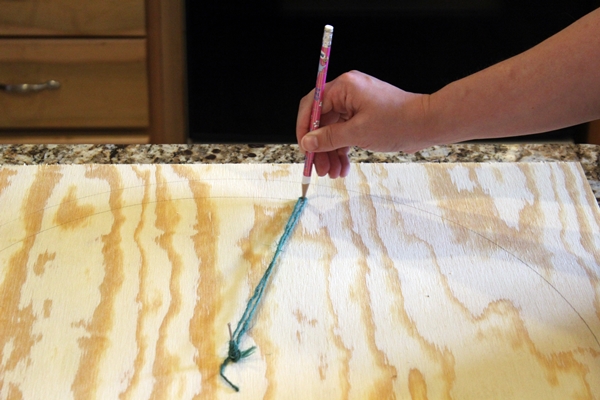 That's the inner circle I'm making right there. We debated whether to do the compartments on the edge of the ferris wheel, but decided not to. I mean, people don't actually have to ride in it; it's just a wall hanging. And we figured it would be pretty obvious it was a ferris wheel And also it would have been hard to cut out all the little round shaped things with the jigsaw.

Then I did my thing where I sketch and redo all the lines 400 times trying to get it right. Dave went back and marked the practice lines with Xs so he'd know where to cut: 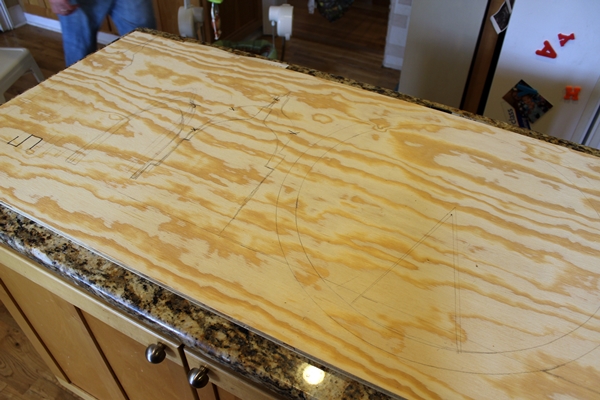 Then down to the basement to cut it out! Dave drilled a hole to get the circle started: 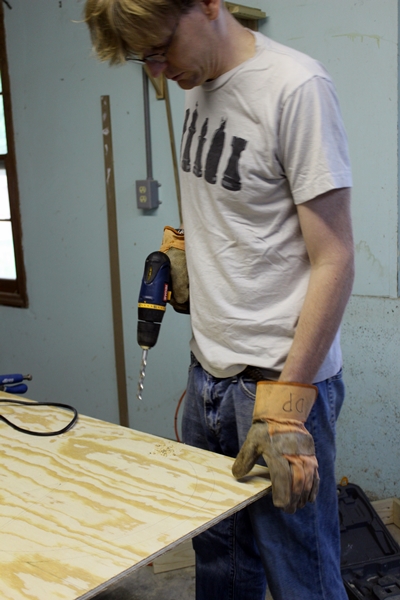 Then cut it out with the jigsaw. In flip flops! Classy! 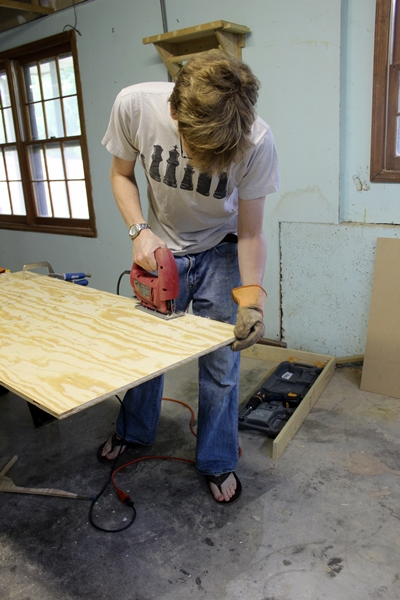 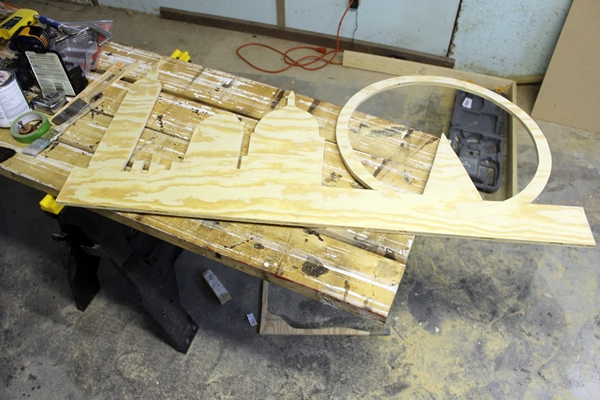 Then I stained it. I used Varathane Dark Walnut (they were out of the Minwax when we bought it. I think I like the Minwax better). 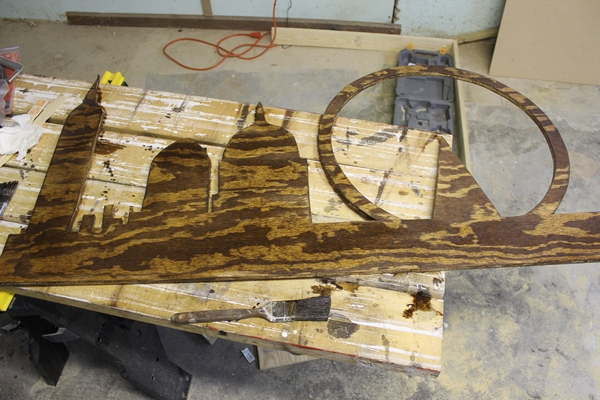 If this were a whale, we'd have been all done. But we still had to do the string part.

Dave hammered a gazillion little nails in two rows along either edge of the circle. He wrapped a tape measure around it to get the spacing even: 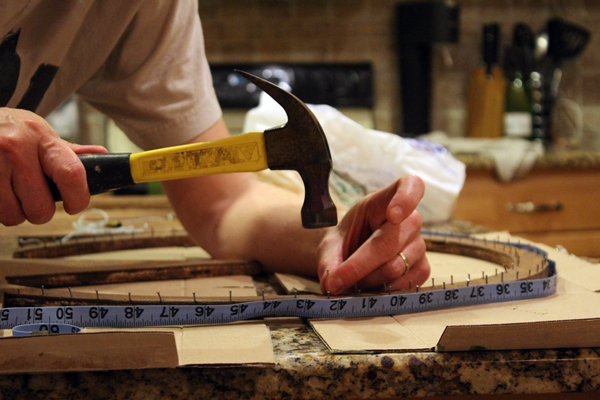 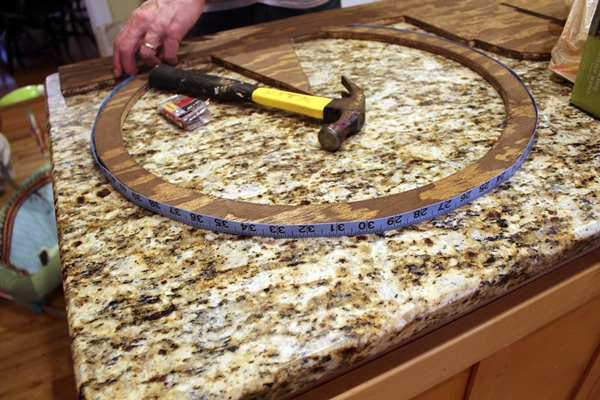 And then we put the thread on (it's hard to tell, but it's a light gray rather than white). We did a criss cross design along the edge and then all the spokes to the middle. This part was tricky at times; it's a little hard to tie the thread to the nails, for one thing. But mostly the problem was with the thread slipping off the nails. We wound up having to put a second nail in the middle, because we couldn't fit any more thread around the first one (this could have been avoided by using a bigger nail just for that center one). 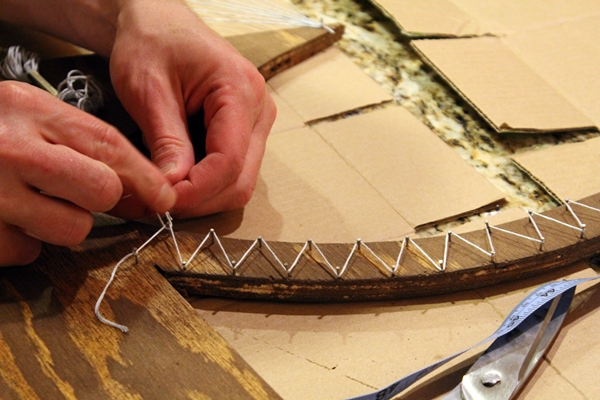 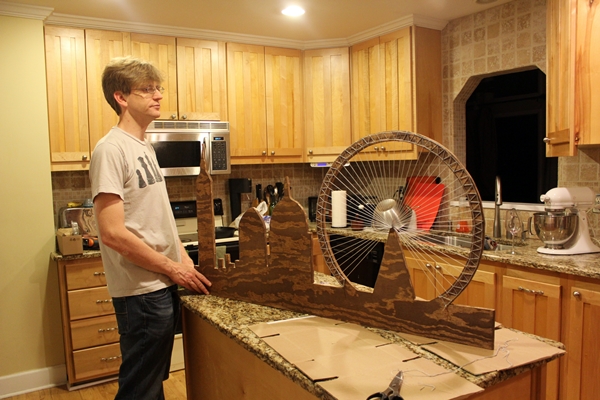 We hung it up over Ari's desk. For the big plywood whale in Abe's nursery, we used anchor screws. But this one was MUCH lighter since we'd cut so much wood away (and it wasn't going to be hanging right over Ari's bed), so we went with just regular screws and screwed it directly to the wall (we thought about various other hanging techniques, but since it's not a rectangle at the top, our options were limited).

And here it is some more! 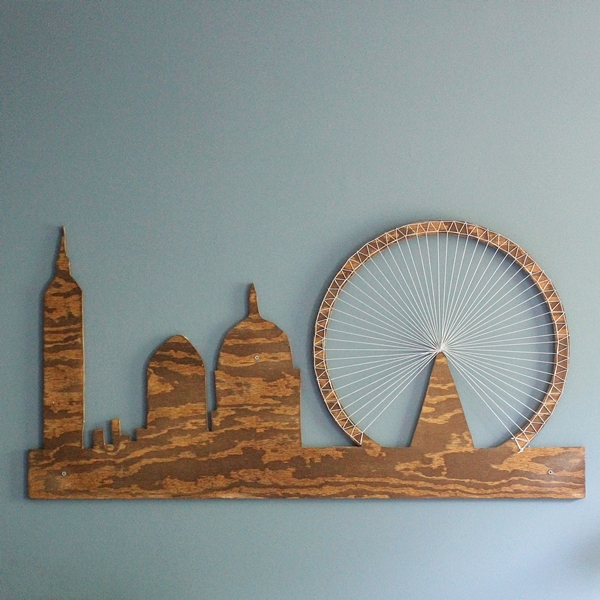 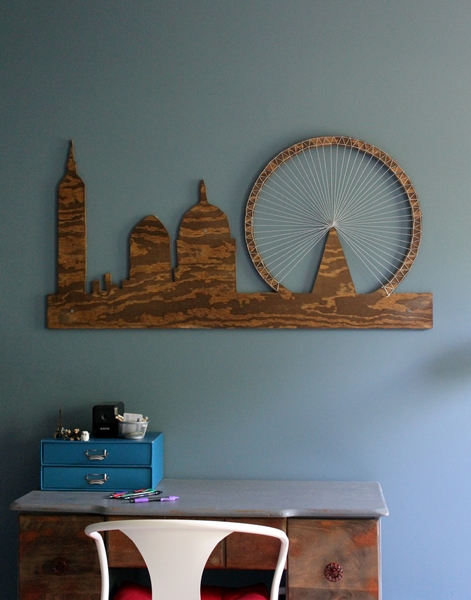 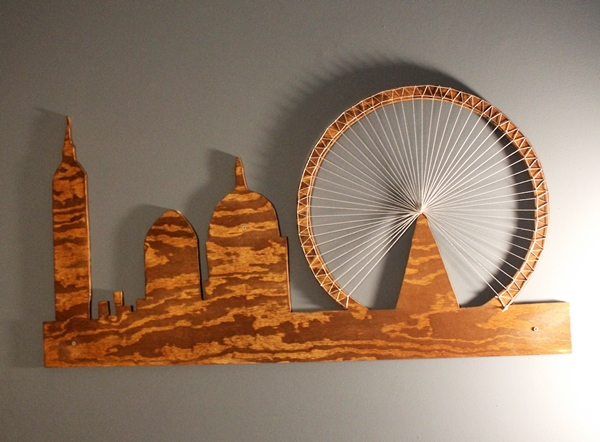 We're almost finished in here! I have one more thing to post individually about, and then a few more little, non-post worthy, things to finish up, and then I'm hoping for the final reveal/tour/source list next week. Here's the to-do list we made before we did the skyline (which is referred to as "secret project" on the list, since I didn't know when I'd post the picture): 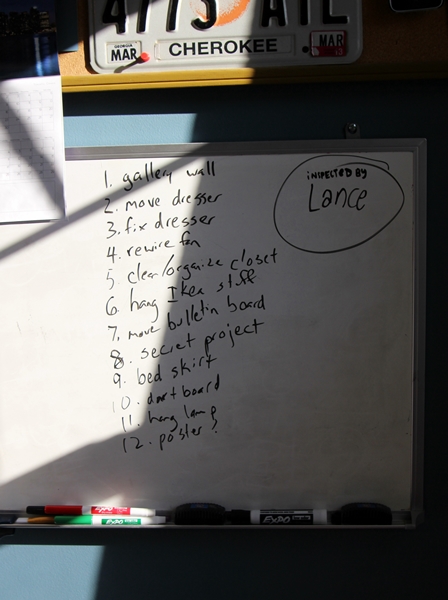