Landscaping On the Cheap (or Free) 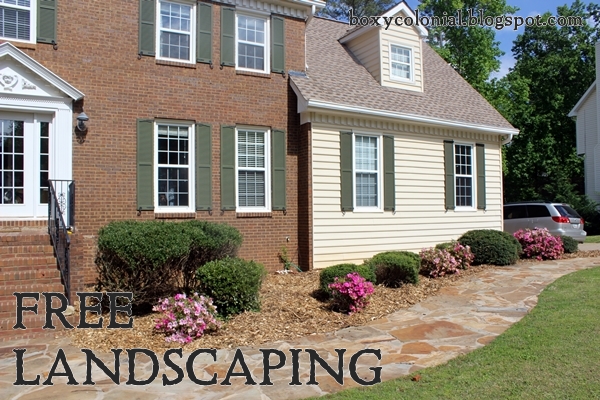 When we moved in to the Boxy Colonial last May, the yard was in really rough shape. The bank that owned it had managed to acquire two liens on it in the few months since they'd foreclosed, one of them for never, ever mowing the lawn. It was a complete jungle in the backyard, and, we found out later, it would have been even worse except that neighbors had been taking turns mowing it every once in awhile. The bank was supposed to have the lawn mowed before closing, but they couldn't even get things together enough to do THAT, so they wound up giving us a $250 credit instead. Which seemed like a win for us until Dave actually had to spend hours in the sun mowing that mess.  A riding lawnmower was one our first new house investments.

So for the first summer, we mostly just tried to keep things more under control than Bank of America had managed to (should I not mention the name of the neglectful, incompetent bank? Well, I did. It was Bank of America. Everyone already hates Bank of America anyway, right?)

We did make a token effort at dealing with big, weedy area right in front of the house. I've already confessed that we didn't actually trim the bushes or anything, but we did weed and buy a whole bunch of mulch from Home Depot to put down. It turns out, though, that what seems like a whole lot of mulch doesn't go very far once you start putting it down. Before long, you've spent your life savings on mulch and you STILL haven't covered up more than half of the big area in front of your house. So you give up and try not to look at it any more. If you are us. This is why they sell mulch by the truckload.

Fast forward to this spring. That damn weedy area was STILL sitting there right in front of my house! Action was required. Last year my friend Kristi had a truckload of free wood chips delivered to her house by a tree company, so I spent the winter thinking, "I really need to do that, too!" But it wasn't until the weeds started reappearing in the spring that I was motivated enough to actually take steps toward getting my free mulch.

The idea is that when tree companies cut down trees and turn the trees into wood chips, they need a place to unload them, so if you're in the right place at the right time, they're yours for the asking. First I searched Craigslist for "free mulch delivered" and "free wood chips delivered." (It appears that the line between wood chips and mulch is pretty arbitrary). I signed up online for one service that's supposed to match tree companies needing to unload wood chips with people who want them. They have not yet called. I filled out an online form with a tree company that claimed (on Craigslist) to be working in our area. They have also not called.

Then Kristi, source of all information tree-related, told me that tree guys were at her house taking trees down RIGHT THAT SECOND and that she could send them over with some mulch for me (she lives just a couple of minutes away, one of the many things that made this particular house so appealing). So she did, and we wound up with this in front of our house: 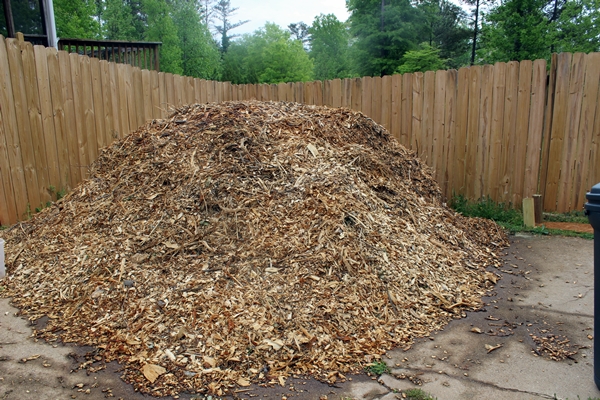 That's a lot of mulch.

Here is what things looked like before we started mulching: 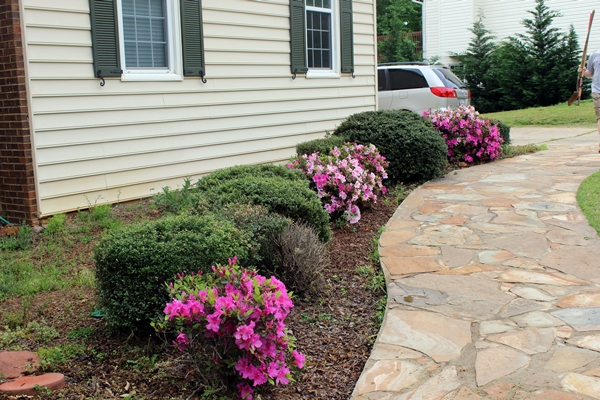 So, after all the hedge trimming that went on a couple of weeks ago, and after those flowers bloomed, but, as you can see, there are many weeds. And the remnants of past attempts at mulching.

First we dug out the bushes that were not so much alive anymore: 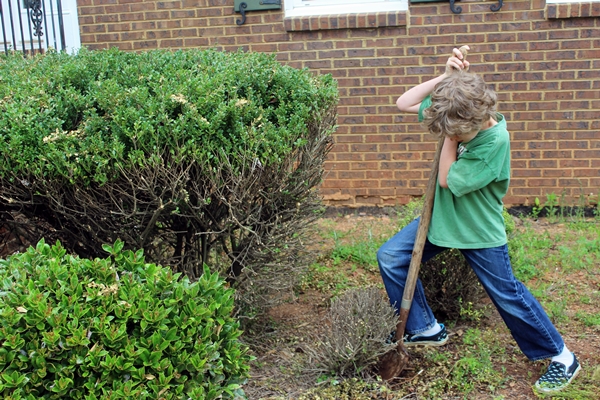 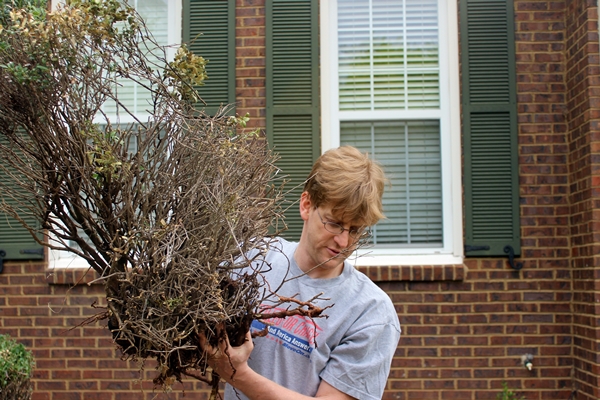 The other way, aside from the mulch, that we kept the cost of this project to $0 was by using whatever stuff we had sitting around to put down under the mulch as a weed blocker: 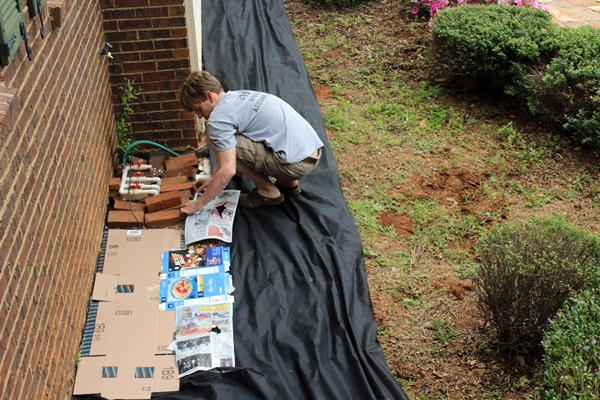 We had one roll of the landscaping fabric you see there left over from last year's abandoned mulching project, but mostly we used newspaper and broken down cardboard boxes. Bonus: recycling!

Many wheelbarrow loads of mulch later.... 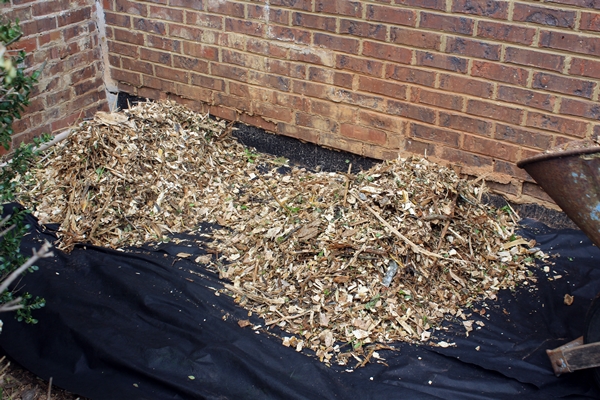 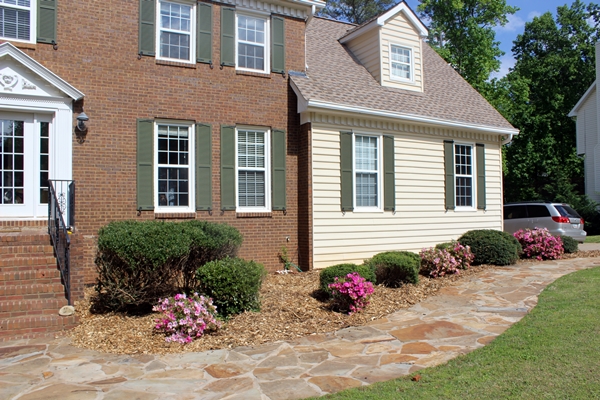 (In pretty much any picture of the front of our house, you can spot a dog looking out the window at us. This one is no exception).

And this much mulch still: 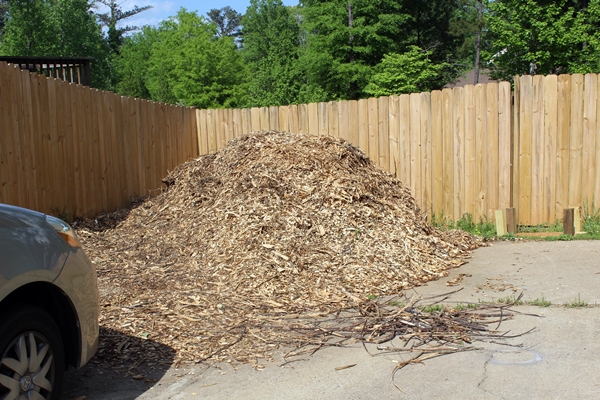 Wow. That's an awful lot of mulch. But we have to do the other side of the front porch and then Dave wants to do the whole side of the house. And around the garden bed. And, hell, maybe just our whole front yard. Maybe THAT will kill the dandelions. I'm kidding.

(Nothing will kill dandelions)

Okay, so I'm not going to pretend that our free mulch is just as pretty as the fancy not-free mulch that they dye to look all beautiful and stuff. Ours is just....wood colored. And kind of twiggy: But I priced that fancy mulch at around $400 a truckload. And I can think of an awful lot of things I'd rather spend $400 on. I think ours looks passably good, and there are no weeds, and that's good enough for me!

At some point I'll post about my future hopes and dreams for that area...which involve a sort of cottage-y look with attractive edibles tucked in (and also me learning how to garden). But I'm good with our free mulch for the moment.

Linking with:
Hookin' Up With House of Hepworths
Crationary's Friday Link Party
The Inspiration Gallery
The Shabby Nest's Frugal Friday
Monday Funday
Tatertots and Jello's Weekend Wrap Up Party
By Stephanie Lynn's Sunday Showcase Party
Posted by Gretchen at 7:30 AM

Email ThisBlogThis!Share to TwitterShare to FacebookShare to Pinterest
Labels: yard