So let's see....we've crossed putting in hardwood floors of the list. I think we've pretty much decided the bathroom tile will have to wait, too. (I guess I should say more about that, since I kept insisting it was SO IMPORTANT. Thing is, the master bath is right over the unheated garage. And it's a huge room with one lone heat vent in it. And we've come to discover, as nights have gotten colder, that it's a very, very cold room. And the small part that already has tile? OMG. SO COLD at night on bare feet. We need to rethink this. And maybe hold off until we can save up for some under the tile heating? We're exploring our options).

But even with this reduced to do list, progress on the nursery has been very slow indeed. Much slower than my pregnancy, it seems, which is a terrible combination. We have less than 8 weeks (or so)! I mean, not that the baby will really notice whether or not his nursery is finished, at least not until he's old enough to focus on things more than 8 inches from his face. But still. I notice.

So we took advantage of having grandparents around to make a childless trip to Ikea (which, really, I have to say, is the only way I can handle a trip to Ikea without snapping at everyone. Crowds make me grumpy. And Ikea always has crowds. And no rides, unlike Disney World, so really, what's the point of dealing with the crowds? Unless you need a room divider for your nursery or something like that. Anyway. More on the Ikea trip and its spoils later.

Even before the Ikea trip, we painted the dresser! The dresser that was Dave's Dad's, then Dave's, then all of our other kids' at some point or another. Even though it has all that beautiful family history and is a pretty cool little retro piece of furniture, I have to admit I was getting kind of tired of it. It had been in EVERY kid's room, after all, and it had looked exactly the same since we first refinished it before Ari was born. 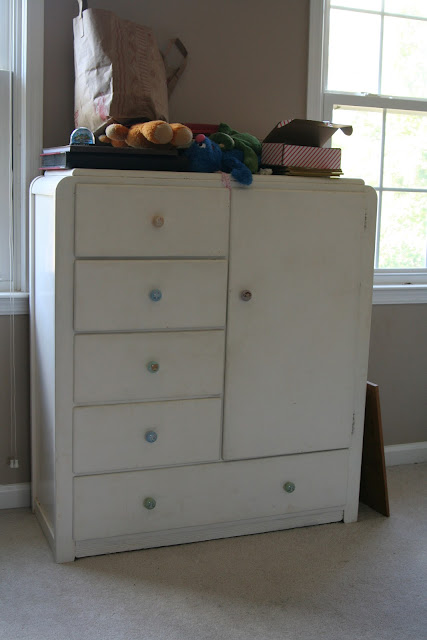 It had this black and white speckled finish on it originally, that Dave's grandmother did back when Dave's dad was a kid. We painted it white (presumably we sanded it, too, though I don't remember the details) and put cute little animal knobs on it (where there had been black handles). And then it sat around getting dingier for 12 long years.

The other day I mixed up some chalk paint (I can't stop!) and we got to work. My original plan was for the whole thing to be the same gray color. We used Behr's "burnished metal," and I was very pleased with it, particularly given that I spent 5 minutes at Lowe's picking it out instead of obsessing with online pictures and paint chips for forever like I usually do. I wanted a very light, close-ish to white, gray. Once the gray started going on, though, I decided I wanted something a little more exciting. Like how's about painting the drawers and door a different color? So daring.

I went back to my never ending supply of paint samples from the library/dining room and pulled out Benjamin Moore's James River Gray, which is the color one darker than Nantucket Fog on the same card. We'd decided it was too dark for the rooms downstairs, but I love it on the dresser. LOVE it.

Then a coat of wax and the new whale knobs (which have been sitting in a box, patiently waiting to be used, for quite awhile now).

I'm so happy with how it turned out! I am officially re in love with our little piece of family history dresser. Now we just have to do...all the other things. 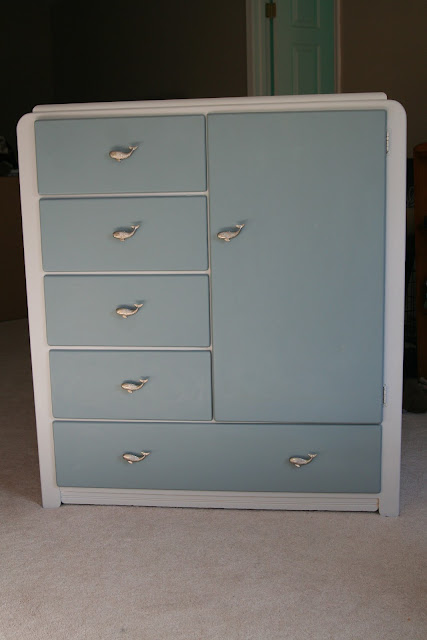 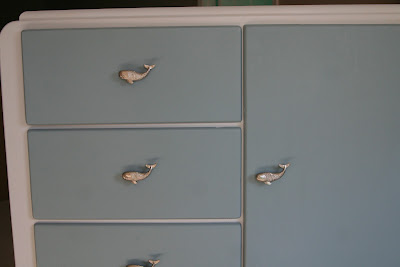 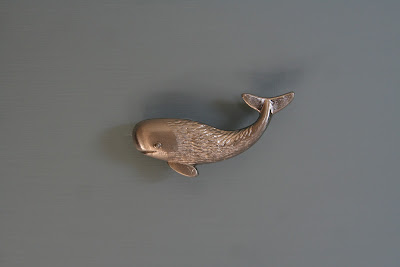