Continuing on our glacially paced house tour, we arrive at the den. Here it is before we moved in: 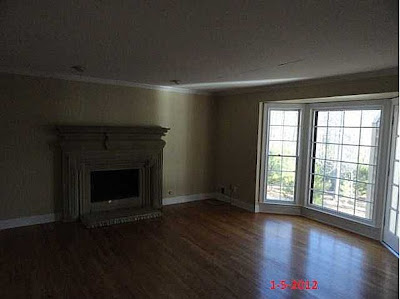 It looks bigger in the picture than it really is, I do believe. Tricky lenses.

And it's a tricky room, too....the trickiest in the house, I think. I cannot figure out what to do with it. It feels very dark, even though it has that giant bay window. And it has doors and windows and giant fireplaces everywhere, making furniture placement very tricky. I stay up nights trying to figure out where to put couches and whether I can get away with a darker color and on and on and on. For the moment, though, it is necessarily on hold while more time sensitive projects take priority.

Here's where it is now: 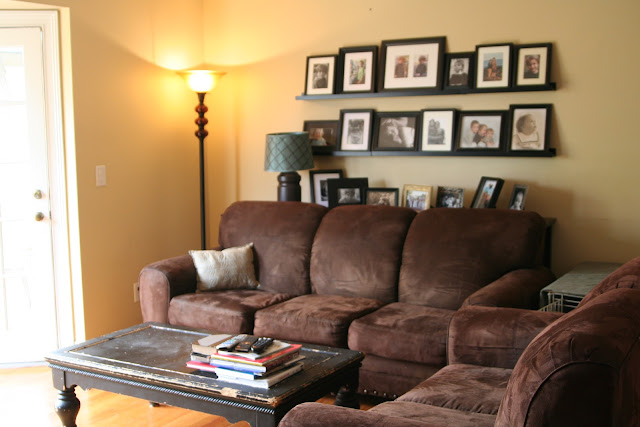 Really, more or less this is just our living room from our old house, transported! Only it doesn't work as well here. Okay, so here are our giant sofas. These were at Goodwill, and they were cheap, so they are what we have. We've had them in pretty much every conceivable arrangement in here. The loveseat used to be in front of the bay window, which opened things up more, but meant the loveseat kept getting pushed back against the window and that no one could see the TV very well from it. And the couch used to be pulled out from the wall enough to walk behind it. Only just barely. And it kept getting pushed back, too. We really need a rug.

Anyway, I'm pretty sure this is as good as it gets with these couches. There's a "console table" that's actually a long shelf from Ikea behind the sofa. Against the wall and it's too far away from the TV; away from the wall and the room shrinks too much. And having the loveseat there makes things kind of choppy coming from the library, but, well, it has to go somewhere. We have a lot of people who need to watch TV around here! I think in a perfect world we'd have a sectional with a nice low profile. But that's not likely to happen anytime terribly soon.

Note incredibly beat up coffee table. I bought that at a garage sale for $8 years and years ago and painted it black. It's served us well, but years of kids standing on it and dogs chewing on it have taken their toll. I think for now I'm going to move one of the trunks that's hanging out in the master bedroom down here to be the coffee table, but it might only work until the baby is walking around, because it's a little rough around the edges. 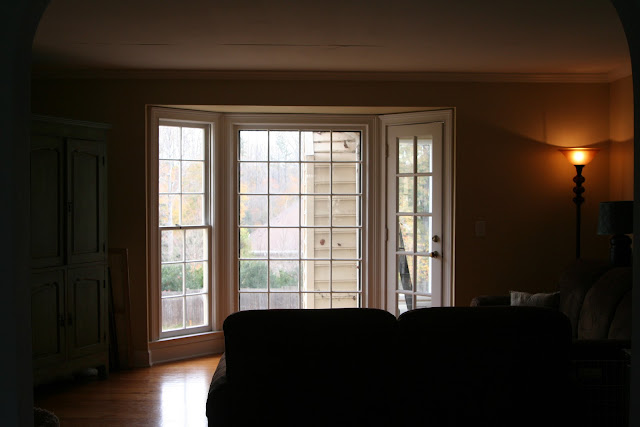 View from the library. Yes, it's too backlit to actually take this picture. And, yes, incompetent sunroom DIY'er put a chimney right in front of the bay window. 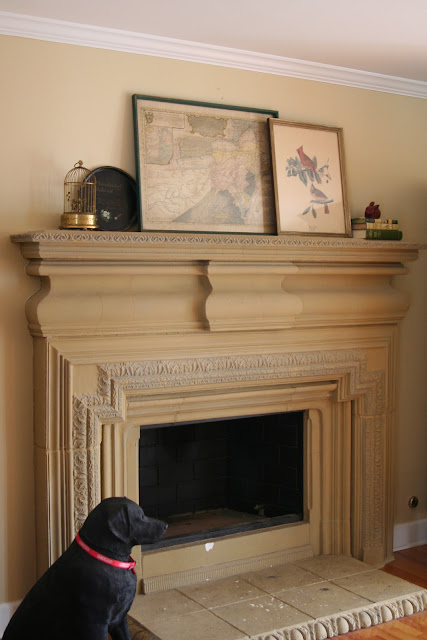 Ostentatious fireplace! It looks like it has feet. Lots and lots of feet.

When my mom saw my lovely mantel display, she said, "it looks junky" sending me into a spiral of self doubt. Thanks, mom. 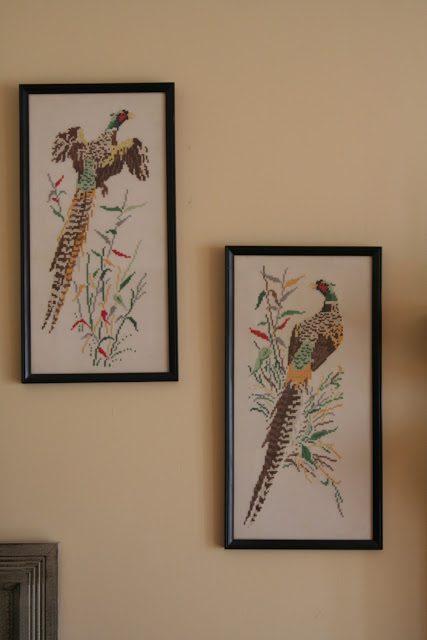 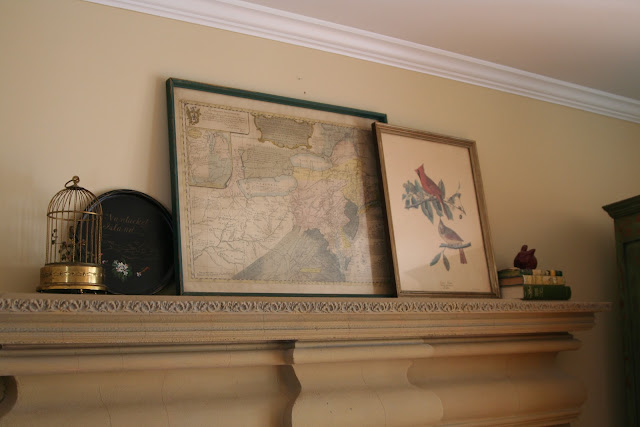 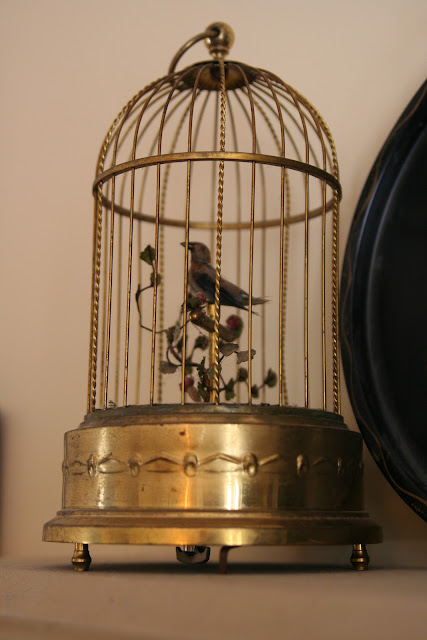 Bird automaton. I should post a video of her in action. She sounds like a real bird! She's not junky; she is valuable. She was in my mom's house for years, and when my mom didn't want her anymore, I talked her into giving the bird to us for Christmas instead of selling it. 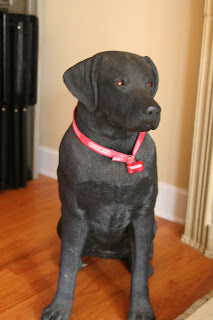 This is Sandycast. That's what it says on his tag anyway. He sat outside my grandmother's apartment for years, and he was the thing I asked for when she passed away last year. Sandycast is an interesting conversation piece. I have been stunned more than once by people thinking he's real. When we were selling the old house, we got one report of a buyer too creeped out by him to enter the room he was in. People are weird about ceramic labradors. 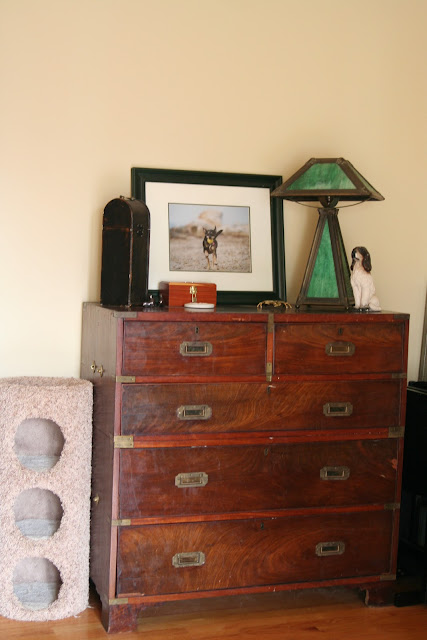 My Dad gave me this campaign chest a long time ago, when he went through a brief period of collecting/selling antiques. I didn't know it was called a campaign chest until very recently, when I started seeing them pop up on blogs everywhere. 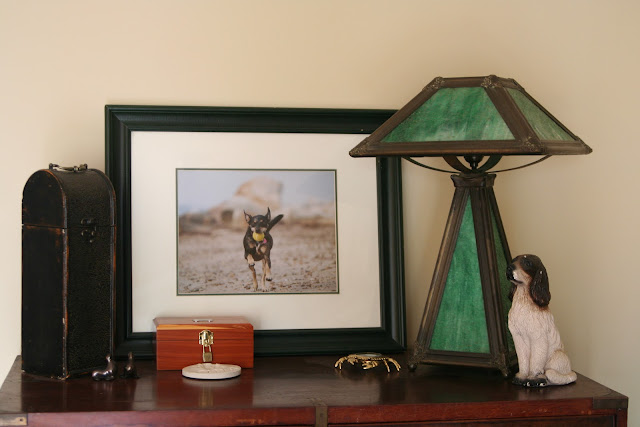 And on top of the campaign chest is this Oliver shrine. Because Oliver was the best dog ever. He died last fall. That box has his ashes in it. Kind of creepy. But I don't really know what else to do with it. 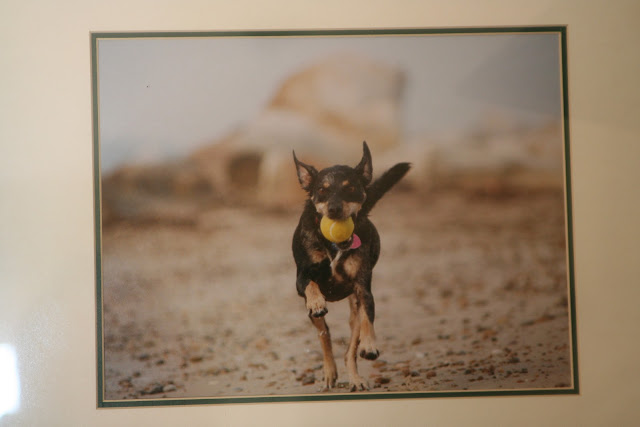 Picture of the picture. That's Oliver on a beach in Woods Hole, Massachusetts. 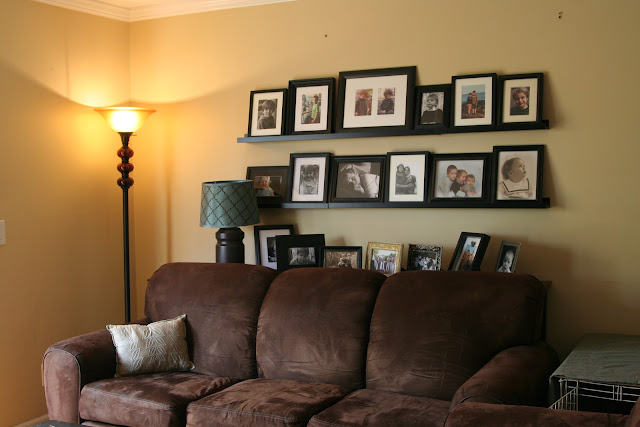 Oh, this picture of our oversized couch and gallery wall is more in focus than the last one! 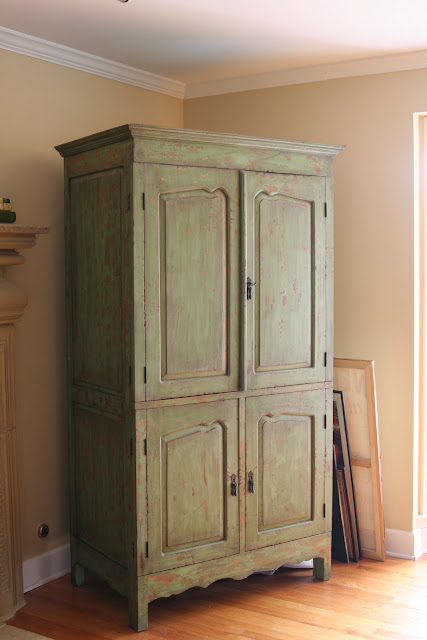 Here's a TV cabinet that worked well in our last living room, but isn't really right here. I'd like something lower and...less green. 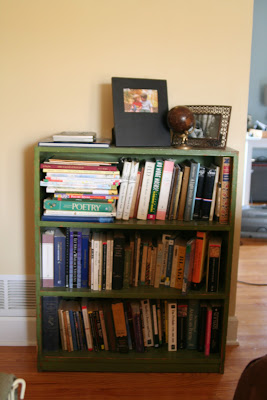 Random shelf! It's behind the loveseat, on the wall next to the archway to the library. It's the poetry/drama shelf. But it's not alphabetized...not yet.

Future plans? I don't even know! I'd like for things to flow a lot better from the library into here. The colors are all completely different. But those brown couches kind of limit things. It is entirely possible the room will hobble along for quite awhile while we tend to other things and save up for a new couch.