I have been holding out on you guys. I know I've been all, "I bought a chair. Disney. Sharpie octopus." ....after promising BIG SUMMER PROJECTS.

Part of the reason for this is that summer always sort of becomes its own project. And, you know, you have to let summer do that, because it only happens once a year.

But ALSO, we have been working on a biggish project, only (see previous paragraph) it's taking way longer than we expected, so I haven't been able to post about it yet. Furthermore, I'm not sure when I WILL post about it, because I'd like to finish a couple of smaller, related projects first so as to reveal the whole glorious thing at once.

In the meantime, I bet there's something else around here that I can draw on with a Sharpie!

Hoping the big project will be ready to post about next week. And I have some catching up on other things to do before that. Like I believe I promised two more posts about future house plans (upstairs and outside/basement) way back a long time ago. And we snuck in a small trip when my mother in law was visiting that I'll post about. And Abe is SIX MONTHS OLD today (!) so there's that.

And today! Today I have for you a post about what I want to do with my kitchen. Someday. Maybe soonish, depending on how much it will cost. By soonish, I could mean this year, but I probably mean next year.

Here's what I said about my kitchen back when I actually posted the first part of the Big House List:


Scenario one (unrealistic, maybe someday scenario)
*move refrigerator to another wall to make room for a big island with seating
*open up doorway wider between dining room and kitchen
*built in storage along wall where table is now?
*all of this moving appliances about would necessitate new counters

I have thought about it more since then.

Our house is plenty big, but the kitchen itself is fairly small for a house this size, and it's not laid out particularly well.

I've mentioned that my house is kind of boxy, right? Oh, wait, it's right up there in the blog title!

Okay, so the kitchen opens up to the dining room, and the center hall, and the sunroom, but it doesn't really open up to any of them.  As we established back when we built our baby/dog gate, the doorway to the sunroom is so narrow that baby gate makers don't even acknowledge the existence of doorways its size.

The eat in area is relatively narrow.

And then there's the way the refrigerator is randomly jutting out of one wall, all by itself, totally interrupting the flow to the hallway AND making things a little cramped if more than one person is trying to use the island.

To top all of this off, I've become increasingly jealous lately of people with big islands they can put stools around. Largely because of all the pretty stools out there. Like these: 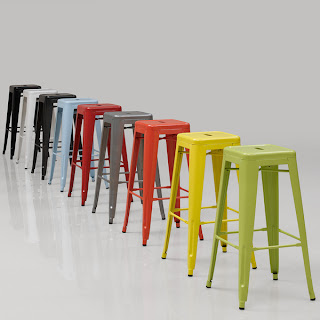 When we first moved in, these problems seemed like ones we'd probably just need to live with, at least for a long while. But the nice thing about not touching your kitchen at all for over a year is that you start to formulate some ideas for ways to make it more functional that never occurred to you early on.

That plan up there was the start of it....I've become a little obsessed with getting that refrigerator off of it's weird lonely wall. But then! The inspiration! It struck!

So I knew that the refrigerator was my big problem. It needed to move. But where? Well, the place where we have lots of wall space is over here: 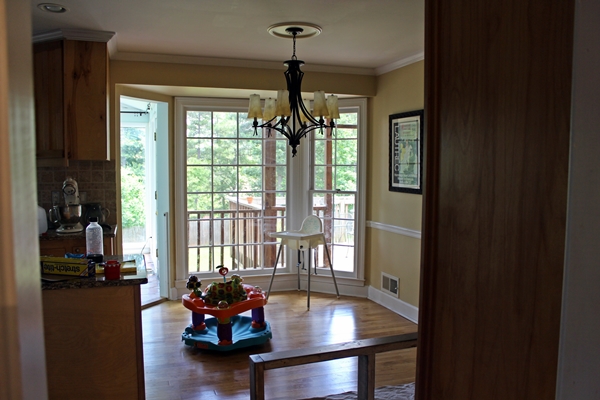 ...uhh, it's harder to tell than I thought. This is the view from the dining room. The cabinet thing you see sticking out on the right is a built in pantry type thing. And then the big wall I mean is also on the right, by the bay window. That's the only big wall that's not occupied by appliances and counters. 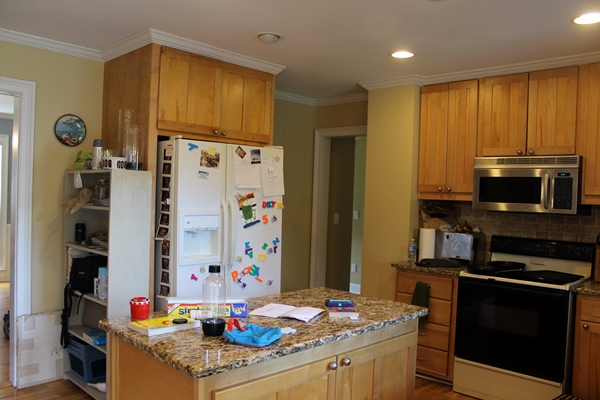 See what I mean? It's just sticking out there being a pain in the butt, making an awkward little passageway into the hallway, and making it impossible for me to have a big, glorious island with pretty stools around it.

(I tried, and tried, and TRIED to find a picture to put here of an island like I want. But all I could find were unattributed or spammy seeming links. Google has failed me).

So if the fridge is gone, I can put in a big island with pretty stools! I'm thinking a fun color for said island and solid colored quartz or granite to coordinate with but not match that speckly granite we have now. In my fantasy kitchen all my appliances will be new and will match, of course. Also, my kitchen will be clean.

So now I have a big ol' island with pretty stools (so I no longer need a table in the kitchen, which is good, because I don't have room for it with my big island) and my refrigerator is hanging out over against the wall, looking weird all alone and next to the bay window, right?

Because (here is where the inspiration comes in).....I want to knock that bay window out and push out the wall! 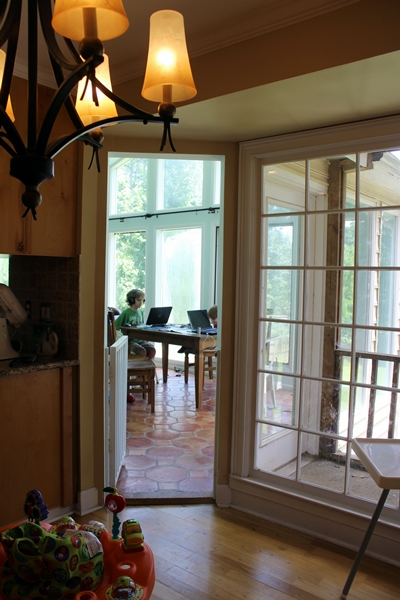 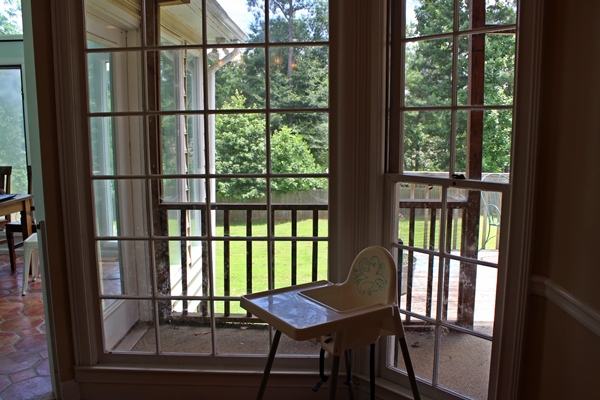 (Ignore doggy paw prints on window; there will be a dog door in my fantasy kitchen, so Fiesta won't have to scratch there to get back in).

I want to push the wall out where that porch railing is now and put in two big windows. That will open that tiny little doorway WAY up to the sunroom, bringing those spaces together. And then the door out to the deck will be on the right there.

And right next to the door, on the big wall?

Will be not only my fridge but a big wall of floor to ceiling built in storage! 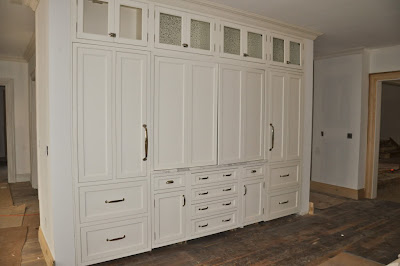 I'm very excited about my imaginary kitchen. We've already had someone out to give us an idea of how feasible my big plan is (along with how much it will cost to keep our sunroom windows from just falling out of  the house one day, which is more pressing). But we haven't heard back yet, so we have no idea what the money will look like and, therefore, no idea whether we'll be 80 before we can make it a reality. But we'll see. And I'm having fun imagining it in the meantime.

Email ThisBlogThis!Share to TwitterShare to FacebookShare to Pinterest
Labels: kitchen