If I Had a Million Dollars....(I Wouldn't Need to Draw an Octopus on a High Chair) 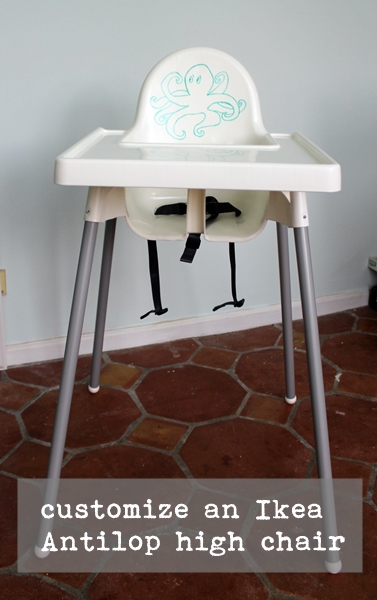 Before I get into the details of customizing high chairs (spoiler alert! I drew an octopus on it!), a few thoughts on the Antilop, in all its modern plastic affordability.

There is not any high chair, no matter how expensive, that really gets me excited. I get excited about totally out of budget baby clothes. I could spend a fortune on baby carriers in various amazing fabrics. High chairs? Eh. Whatever.

With my other kids, I had a chunky white wooden high chair that I'd picked up at a yard sale or something. It was nice, and it served us well, but it's long gone (no baby equipment survived the seven year gap in babies around here). So we needed something or other for Abe to sit in when he eats (which he's not doing yet (I mean, aside from breastmilk) but will soon). I thought about just getting a booster seat with a tray to strap to one of our kitchen chairs. But I seem to recall having gone that route at some point with Gus and it making for a lot of food smooshed into our kitchen chairs.

Enter the Antilop. Basic, no frills, with unoffensive modern lines....and this thing is TWENTY DOLLARS (plus five more for the tray). You can't go wrong, I figured.

You also can draw all over it with a sharpie without too much pressure to make things perfect. Because, you know....it was $20. And it's not going to be hanging out in your house for all that long anyway.

I would love to give you a full review of the Antilop, but Abe's not eating solids yet, so I can't. He likes to sit in it for short periods of time before he starts crying and insisting you pick him up. What I can tell you, though, is that the safety sticker affixed to the inside of your Antilop is so hard to get off it will make you wish you were never born.

Or at least that you'd never bought an Antilop.

Ikea, you know I love you, but, seriously: what the hell?

Here is the label after I spent approximately 3 hours (or maybe 10 minutes) picking at it with my fingernail: 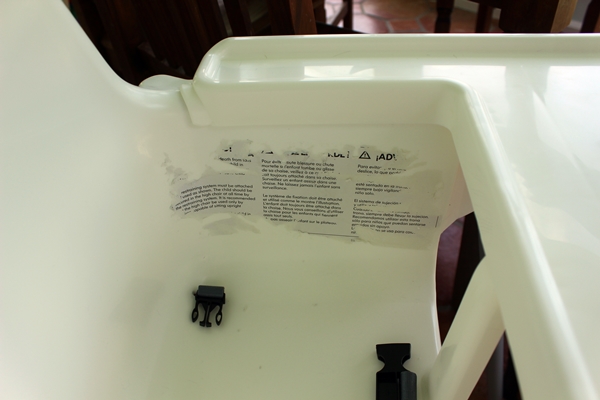 (In fact, this is precisely what I did with the sticker on Abe's Ikea crib. But it's on the inside edge, where no one but Abe ever sees it. It doesn't interfere with my attempts to photograph the nursery).

So then I googled 359 different methods for removing stickers from plastic and tried them all. None of them worked particularly well by themselves, but by the time I'd done ALL of them, the sticker was gone. 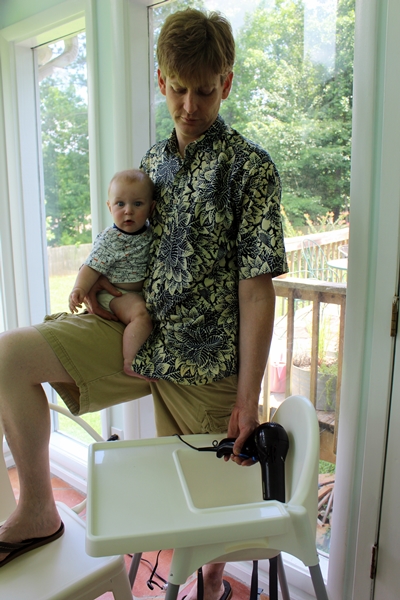 One site suggested a hair dryer to heat up the glue and loosen the sticker. Dave complained a lot about doing this, for some reason: "this is SOOOOO boring." Also, it didn't work at all. 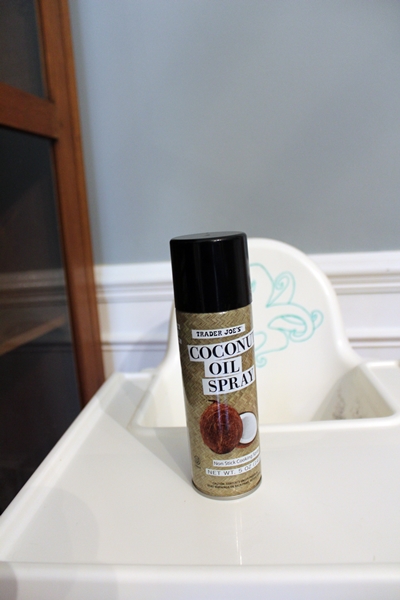 Then there was the "put oil on it and let it soak for 24 hours" method. I couldn't wait 24 hours, of course, because I'm not that kind of person. So I waited three minutes. 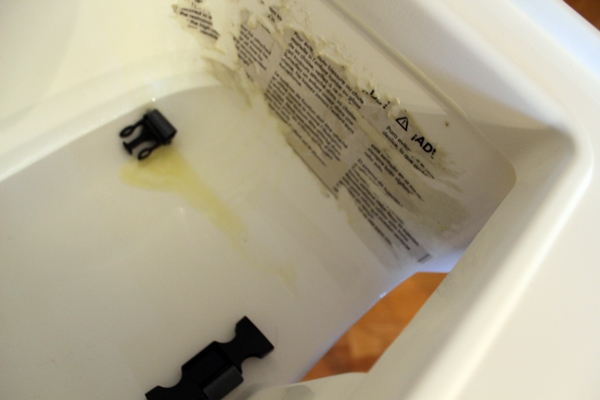 Really, it worked a little, I guess? I went at with a scraper for awhile and made some progress. The Beagle was VERY interested in the high chair once it was coated with coconut oil, incidentally.

Next I sprayed some Windex on it. Why not?!

I learned that Windex and coconut oil smell terrible together. 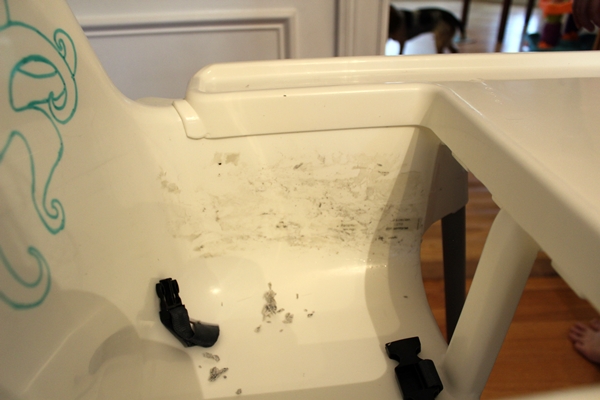 OMG: this isn't better!!! At this point, I was ready to return the $20 high chair to Ikea and spend a million dollars on a high chair if necessary, just to not have to deal with this goopy mess anymore.

But I persevered. Next up: Goof Off wipes: 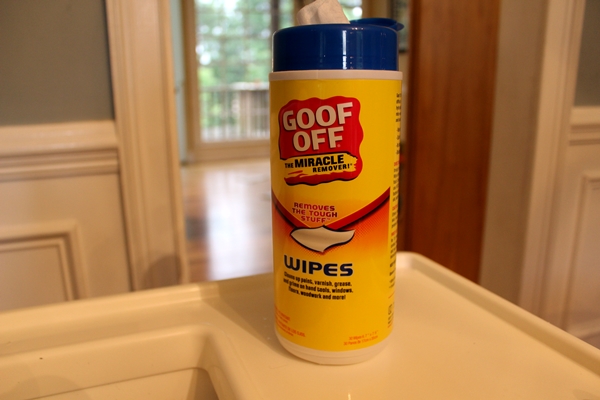 These kind of, sort of worked, if I rubbed really, really hard.

Finally, I read a tip on using WD40 to get rid of sticker residue: 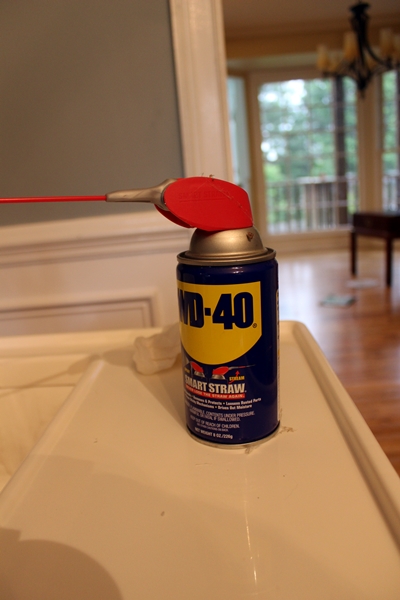 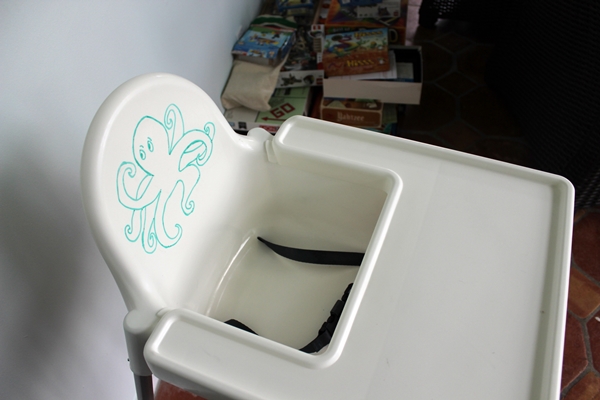 Ignore the part where there's an octopus. I haven't gotten to that yet. Just admire the stickerless plastic (it's kind of scratched all to hell from the scraper, but you can't see that in the picture).

Okay! So! Is plain white plastic any fun? No, it is not. It needs someone to come along and draw on it with a sharpie.

A little while ago, Anu over at Nalle's House put some Moomins on her high chair, and it looked ADORABLE (spoiler alert again: mine is not as adorable): 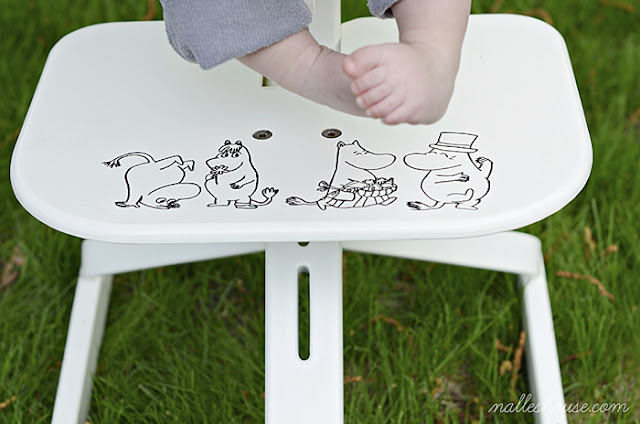 So this was my inspiration. I considered a lot of different ideas. Maybe a pattern of some kind? (paisley? arrows? hexagons?) Maybe another whale?

But I've always been a little bummed about the lack of octopuses in Abe's nursery, so I decided to go that route. I sketched out an octopus that I was pretty happy with and spent some frustrating time trying to cut out a stencil-like thing from it: 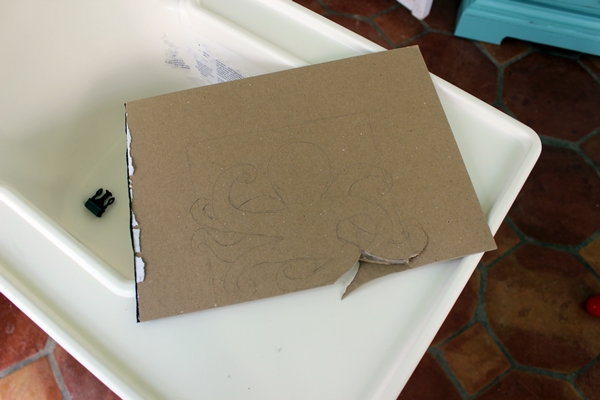 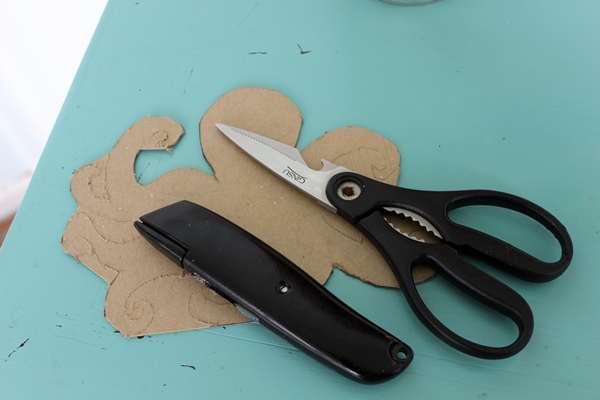 Then I gave up. I was having a very hard time, and I was still going to have to figure out how to get those inside lines for the legs on there anyway...it wasn't all outline.

I tried to sketch it out in pencil first, but I couldn't see the pencil lines at all. Frustrated again!

Finally I just threw caution to the wind and started drawing right on the plastic with the sharpie.

And. Well. This isn't the most....professional looking thing I've ever done. But it's cute enough. And, hey, the high chair was only $20! 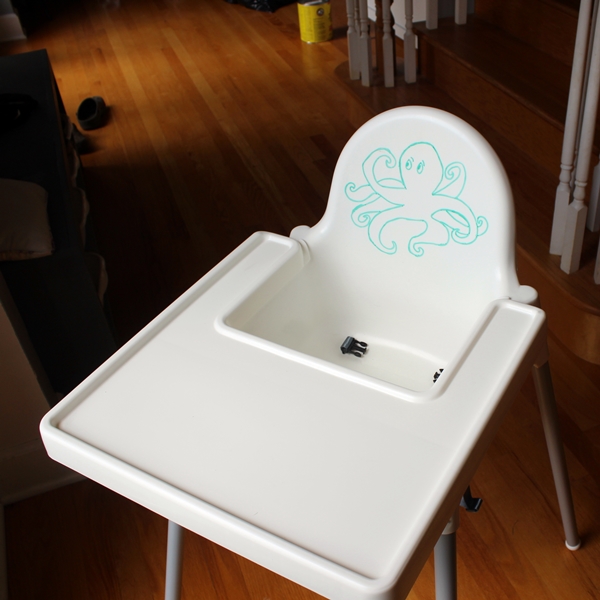 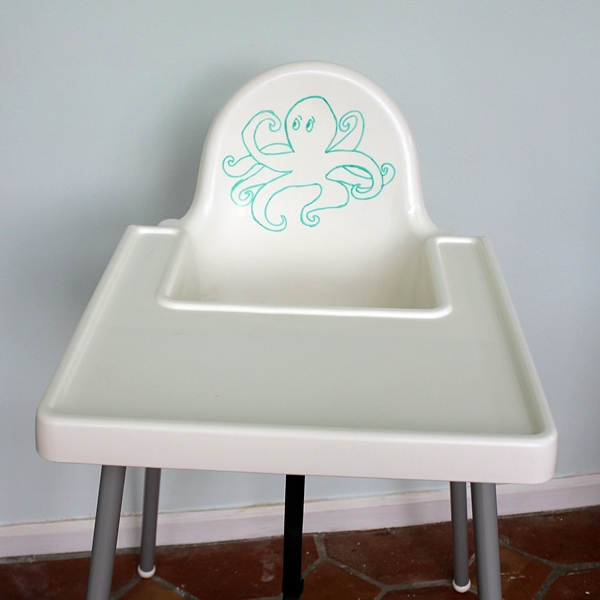 The octopus looks a little angry. And kind of like he's boxing.

Linking with:
The Inspiration Gallery
The Shabby Nest's Frugal Friday
Liz Marie Blog's Inspire Me Please
Tatertots and Jello's Weekend Wrap-up Party
Monday Funday
Home Stories A to Z's Tutorials and Tips
Hookin' Up with House of Hepworths
Give Me the Goods Monday