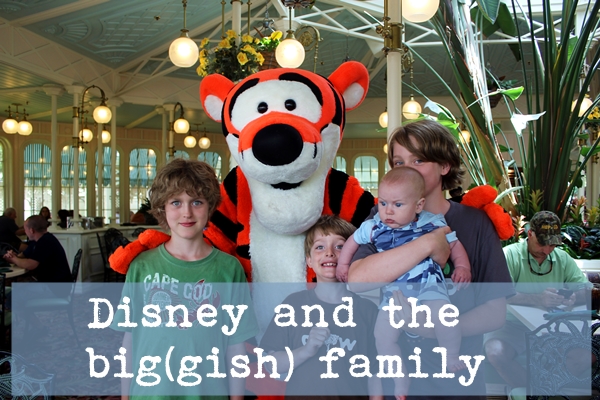 I know that four kids is nothing compared to what some people have, but, for Disney purposes, anything other than your standard two adults and two kids means you have to do a little extra planning. Mostly when it comes to picking a hotel room. So I'll focus primarily on that and then toss in a few extra thoughts about travel with more than two kids at the end.

On paper, you have plenty of options for places to stay at Disney with five people, and things don't really start to get limited until you hit six. In actual practice, though, most of the options that become unavailable to you once you have that pesky fifth person are all the cheapest hotel rooms on property. So while you still have lots of choices, they're largely pretty expensive choices. A standard room in a value resort or in any moderate other than Port Orleans Riverside sleeps up to four people. A standard room in most of the deluxes, on the other hand, sleeps five. I've seen some heated threads on the Disboards where people like to talk about the gazillions of choices you still have for your family of five....but this presumes that you also have gazillions of dollars.

There ARE some good, non-gazillion-dollar-costing, places to stay with your family of 5 or 6 or more, but finding them isn't necessarily as simple as getting on Disney's website and plugging in how many people you have. It pays to get a little more creative.

A note: Disney doesn't count kids under 3 as people, so you if you have a kid under 3, you get an extra person in your room.

Okay, so! I'm going to try to break this down as simply as I can, but it's a kind of big, sprawly topic (and I'm sure I'll leave something out, so feel free to jump in in the comments with any options I'm not thinking of!). Let's start off with a category for, specifically, parties of exactly five (or five plus a baby under 3 in a crib). You have a fair number of options that go away once you hit six people.

If you have exactly five people.... 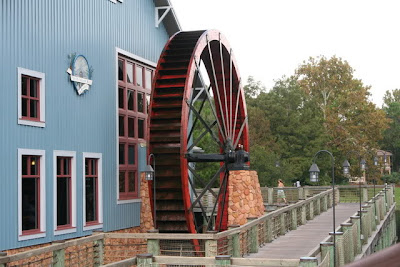 This is a moderate resort (i.e. the middle category, price-wise), and there is one section of the resort that offers rooms with two queen beds plus an extra pull down bed suitable for a younger kid to sleep in. I believe they recommend them for kids under 10. This is likely going to be your cheapest on-property option for 5 people. I haven't stayed here. We almost did once, but wound up having to cancel that trip. The downside here is that you have five people in one not so big hotel room.

2. Any deluxe resort except Animal Kingdom and Wilderness Lodge

All of these rooms have two queens plus a daybed. They're also all really pricey. And you're still putting a lot of people in one hotel room, albeit a bigger one than Port Orleans.  But you're in a deluxe resort, which means nicer theming and, generally speaking, better location and/or transportation options.

If you have five or more people....
(listed in order, roughly, from cheapest to most expensive)

1. Off property (up to....lots of people): the cheapest way to go. Your options here are virtually endless. You can get a 2 room suite that sleeps 5 or 6. You can get a 6 bedroom house with a private pool that sleeps 14. The advantages here are price and space. The disadvantage is that you're not on property. More on pros and cons here.

2. Two rooms at a value resort (up to 8 people): we've stayed in two rooms at Pop Century three times now, and it's worked really well for us. You need to request connecting (not adjoining) rooms. We've always gotten connecting rooms (with a door in between) no problem, and we've always been told that they will guarantee that we get them because kids outnumber adults in our party. However, I've heard horror stories of people going at very busy times of year and not being given the connecting rooms they were promised. So, if it will ruin your vacation to be stuck in totally separate rooms, proceed at your own risk. The advantages here are price--this is probably the cheapest way to go for on property accommodations for six or more and that you have a fair amount of space and two full bathrooms. If you have two adults and 4 or fewer kids, you can request a king bed in one of the rooms (and 2 doubles in the other), but the king rooms are rare and hard to come by; we've had mixed luck trying to get one. Keep in mind that these are small rooms; there's no space for a rollaway and not much floor space, so if you have kids who can't or won't share a double bed well, you want to figure out the configuration ahead of time.

3. A family suite at All Star Music or at Art of Animation (up to 6 people): All the family suites are, I believe, exactly the same square footage as two rooms at Pop or another Value resort. In fact, the family suites at All Star Music ARE two value rooms that have been converted into a family suite. But you pay a little more for a suite at All Start Music than for two value rooms, and you pay quite a bit more for Art of Animation. The advantages are that you're really and truly guaranteed rooms that connect to each other, and that you have a kitchenette with a microwave and fridge. At Art of Animation, you're also staying at the newest resort on property. I hear it's pretty fabulous.

4. Cabin at Fort Wilderness (up to 6 people): These cabins have two rooms....a bedroom with a full size bed and a bunk beds, and then a living area with a full kitchen and a murphy bed. A step up in price from the family suites, but you get a full kitchen.

5. DVC resorts: Disney Vacation Club is Disney's timeshare program, but they also rent out the rooms that aren't being used by members on a per night basis. There are studios, 1 bedrooms, 2 bedrooms, a few 3 bedroom "treehouse villas" at one resort, and grand villas. There are quite a few DVC resorts, and some of them have really great locations adjacent to deluxe resorts like the Contemporary or Animal Kingdom Lodge. Oddly, both the studios and 1 bedrooms have a maximum capacity of 4 (with some exceptions....I believe a lot of the newer DVC resorts can accomodate 5 people in some studios and/or 1 bedrooms), so you're looking at at least a 2 bedroom with your biggish family. Renting these rooms directly from Disney is crazy expensive (you can often get discounts. But they're expensive even with a substantial discount). But the other option, besides renting directly from Disney, is to arrange a rental with a private timeshare owner by renting points from them. Disney uses a points system to keep track of things, and if an owner isn't going to use all the points in a given year, s/he can rent them to someone privately and then make a reservation for the person who rents them. This is substantially cheaper than renting from Disney, but it is a little more complicated and comes with fewer protections for you as the buyer. I have friends who have gone this route and been very pleased. We've never done it, largely because it would mean no free dining (you have to book a full price package to get free dining). There are lots of places online that will help you arrange all this point transferring. I can't personally vouch for any, but here are a couple of popular ones:

Okay! That's all I can think of! Well, you could also camp at Fort Wilderness. I know nothing of this. It sounds hot.

A few other things to think about:

1. We were surprised to learn on this trip that the parent swap passes (what they give you when one parent waits with your baby so that s/he can go back through and ride without waiting when you switch off) is only good for three people total. I.e. if you have more than two kids, they won't all be able to go again with the second parent. I'm not sure if this is new or if we'd just never noticed before since it didn't affect us. Now, in practice, they always let us bring our extra kid through. I don't know if we got lucky, or if it's unwritten policy to do so. I'm sure the policy is designed to keep people from bringing enormous groups including aunts, uncles, and random passers-by through with their parent swaps, not to punish little children for having too many siblings. But, anyway, something to be aware of.

2. Think about how to handle different age groups/different interests in advance. Are you going to split up some, having younger/too short kids go off with one parent? Or all stay together (which can make for a lot of waiting for shorter kids or a lot of kiddie rides for older kids)? Gus has a pair of light up drumsticks from the gift shop outside Rock n' Roller Coaster specifically because I felt guilty that he had to wait on his taller brothers so much one year. Often there's a younger kid appropriate ride or attraction near the bigger kid ride, but certainly not always.

This has taken me FOURTEEN YEARS or so to finish writing, and it will only be useful for approximately .002% of the population. Oh well!

If you missed the first few installments of this epic series, you can read about what time of year to go here, pros and cons of staying on property here, and tips for bringing along a baby here.

Next week I'll talk about what you can do to save a bit of money on your vacation.

And now a few highlights from day 4 of our recent trip, AKA the day we finally made it to the Magic Kingdom: 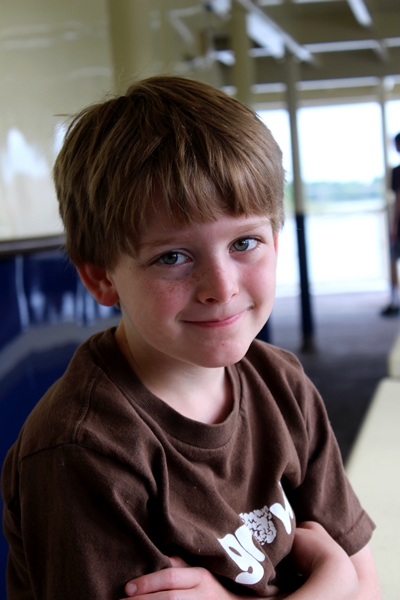 We took the boat instead of the monorail from the Transportation
and Ticket Center in the morning. Here is Gus on it. 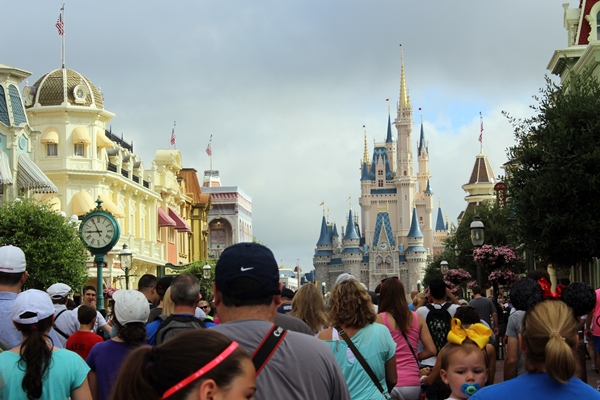 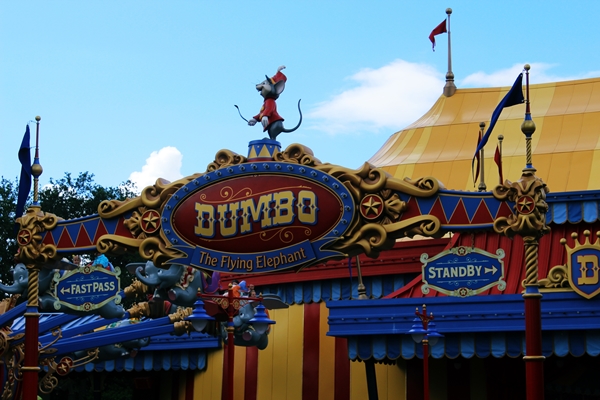 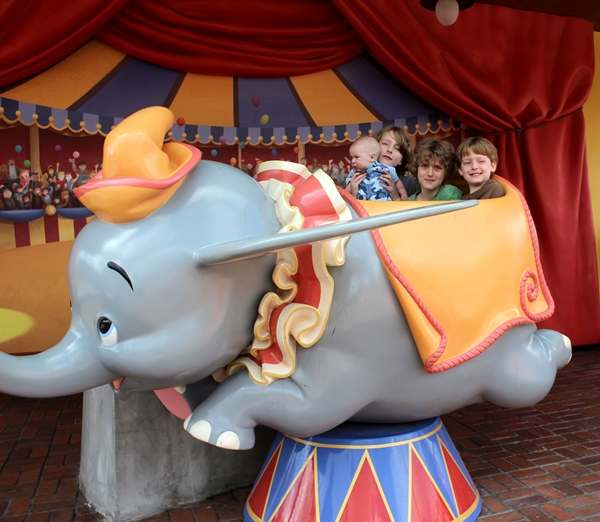 You have to make your kids sit in the Dumbo for a picture. It's the law. 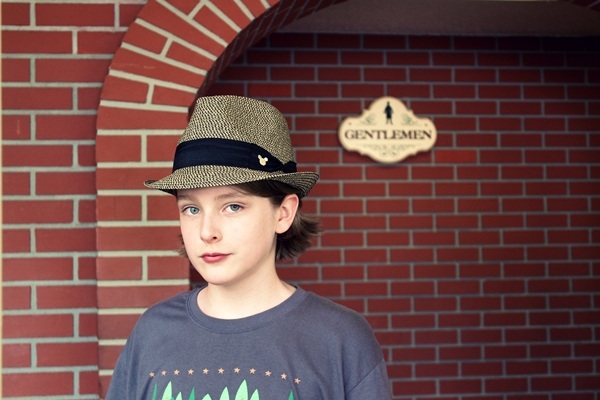 Ari selected this Mickey fedora as his souvenir for the trip, because he's AWESOME.
And then I took a perfect picture of him wearing it with the "Gentlemen" sign in the background
because so am I. 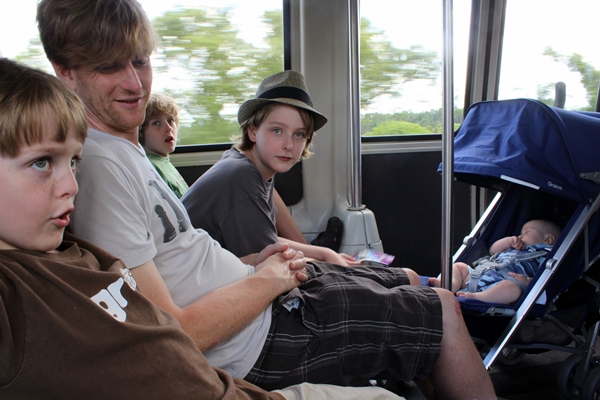 It's everyone (except me) on the monorail.


Linking with:
The Inspiration Gallery
The Shabby Nest's Frugal Friday
Tatertots and Jello's Weekend Wrap-up Party
Posted by Gretchen at 7:30 AM

Email ThisBlogThis!Share to TwitterShare to FacebookShare to Pinterest
Labels: Disney