I know we're probably all pretty nostalgic for my summer Disney series that I finished last week ;), so I thought I'd ease you back into the whole boring fall routine (I know it's still firmly summer for a lot of you, but Dave went back to work last week, so it's fall to us) with one more summer travel post. I'm very considerate that way. Also, I've been meaning to post these ever since we went to Chattanooga, which was over a month ago now.

Dave's mom (henceforth known as Nana) came to visit last month, and we decided to mix things up a little and spend a couple of nights in Chattanooga while she was here. Nana had never been to Chattanooga! (trip courtesy of Nana--thank you, Nana!)

We stayed at the Residence Inn downtown. We'd stayed there a couple of times before, but not for years. The location is amazing: very close to the aquarium, the children's museum, the baseball stadium, the river, tons of restaurants, etc.

We left the morning of July 2 and got to Chattnooga around lunch time (it's a 2 hour drive for us, so perfect for weekend trips). We ate at the Terminal Brewhouse, a relatively new restaurant/brewpub in a cool old building right next door to the Chattanooga Choo Choo: 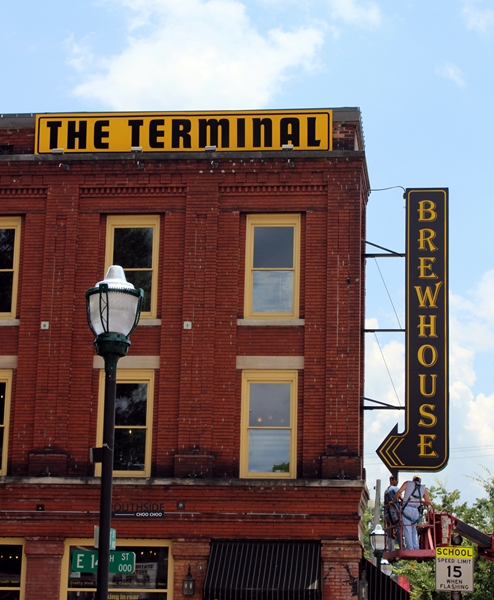 After lunch, we spent some time walking around the Choo Choo grounds (this is an old train station converted into a hotel. You can stay in actual train cars or....really dated 70's hotel buildings that have been added. We've tried both). Ice cream was involved. 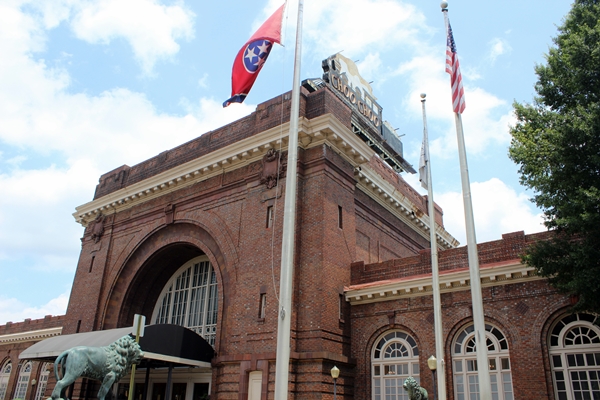 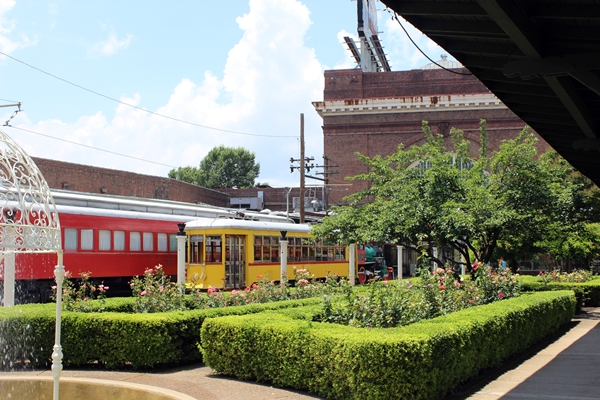 In a room off the lobby, there's some paisley wallpaper. Dave loves paisley, so I took a picture: 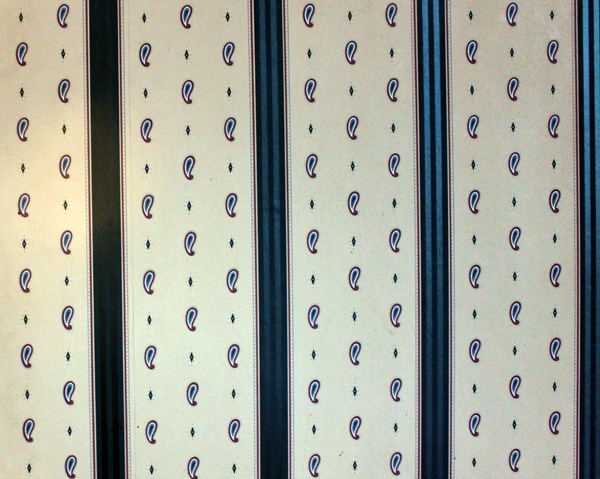 I spent much of the trip forcing everyone to pose for pictures. Like in the lobby of the Chattnooga Choo Choo: 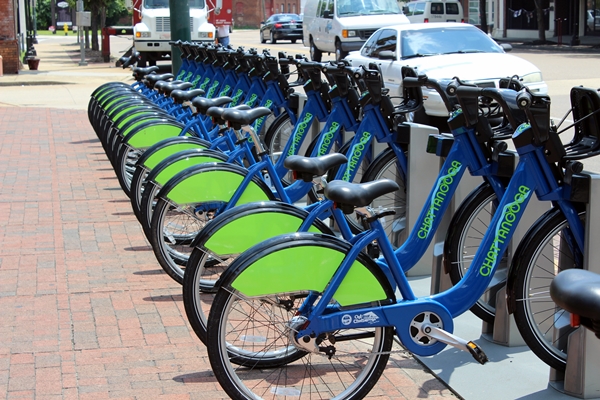 Then you go way down underground in an elevator and walk around in a cave, looking at cave stuff, until you get to "the tallest commercial underground waterfall in the United States." Which does not actually sound that impressive to me, but I guess they're pretty proud of it because they tell you that. Anyway, the first few minutes underground are also really scary because maybe you're afraid the whole mountain is going to collapse on your head. But then you get used to it and stop panicking quite so constantly. 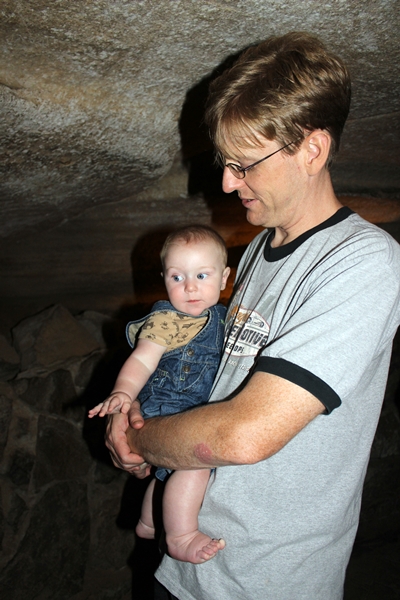 So you get to the waterfall, and they do a big dramatic thing where the lights are off, and then they turn them on, and it's SO TALL and amazing. Like this. With colored lights: 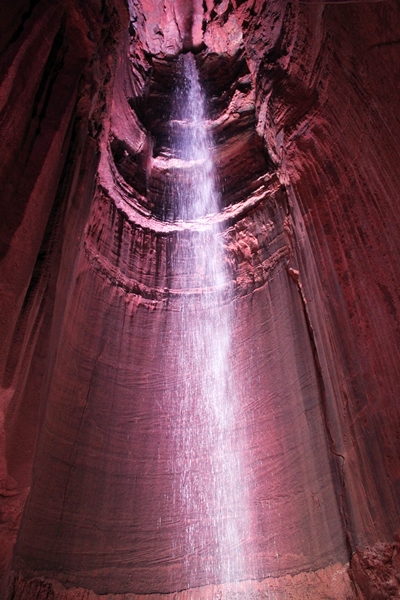 But if you try to take a picture of your kids in front of the waterfall, this happens: 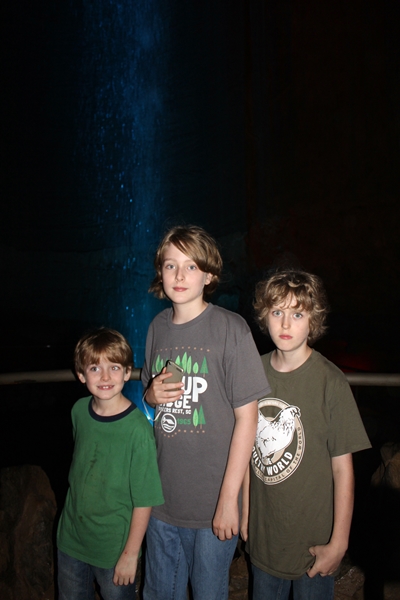 The part that blew my mind is when our guide told us that they have no idea where the water comes from. They've tried to figure it out by putting dye in the water of various streams above ground and stuff, but, yeah...no luck. This made me start thinking again about how maybe the mountain was going to collapse on our heads, because if they don't even know where that water comes from how do they know it's not slowly destabilizing the whole place?!

But we made it back out right before it collapsed (just kidding. As far as I know that STILL hasn't happened) and survived to check out the TERRIFYING look out tower: 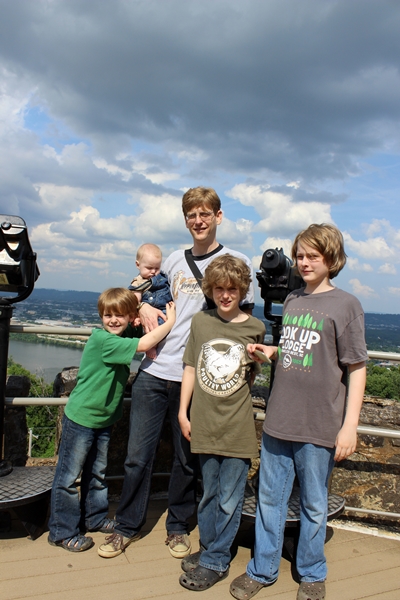 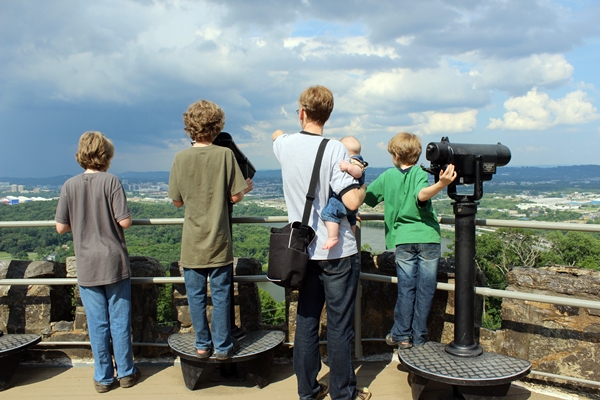 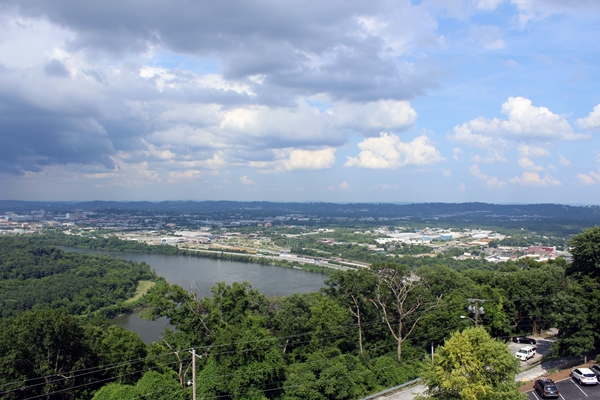 And on the way out, this sign was really crying out for a forced group picture: 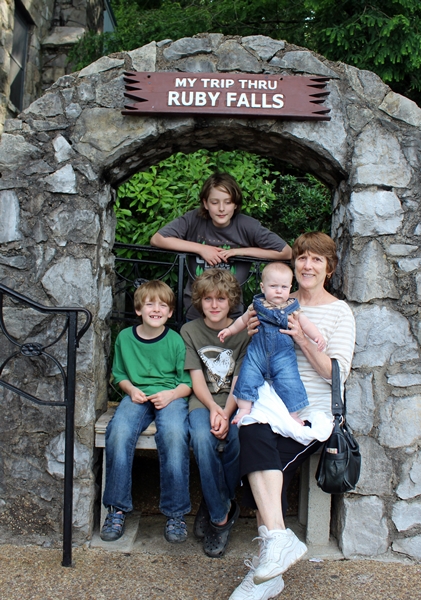 The next day we were supposed to go to the aquarium and then go see the fireworks over the river. Only the fireworks were rained out, so we only did the first thing.

I already talked a lot about the Tennessee Aquarium here, so I won't rehash the whole thing. We had fun. We posed for group pictures (well, I didn't. I took them instead): 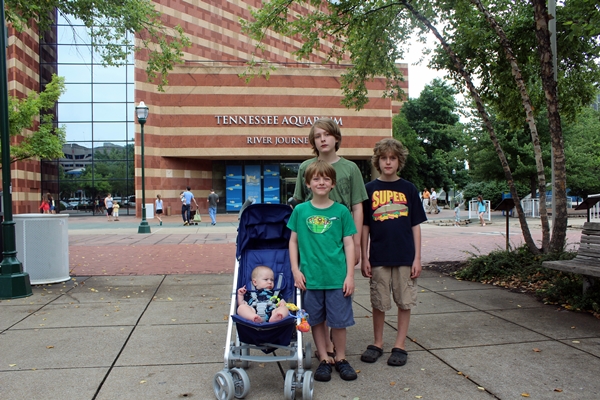 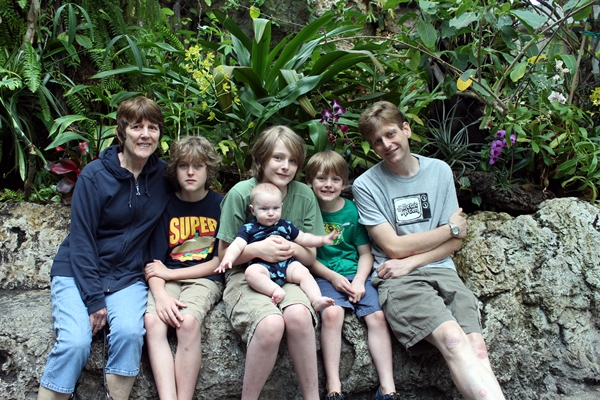 And we watched a diver get eaten by a shark.

I'm just kidding again. She didn't get eaten. They have another diver stand next to her with this stick to make the sharks go around her instead of eating her: 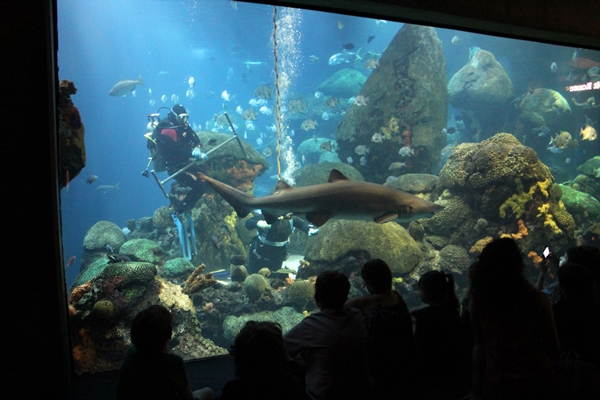 So there you have it. Our summer travel: completed!
Posted by Gretchen at 7:00 AM