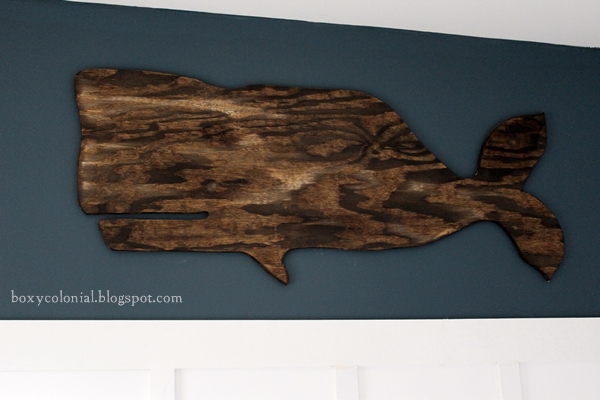 I think I first got the idea for making a big wooden whale while I was poking around looking at ocean animal stuff on Etsy and saw a few from various sellers on there. For prices like $80-90 + shipping (and shipping is a lot on a big wooden whale). I was pretty sure that if Dave and I combined forces, we could make a whale for a lot less than that.

And, look, we could!

It seems that the way our big nursery projects go is that every other project is more of a pain in the ass than I expect, and then the alternating ones are less so than I expect. Fortunately, we were due for easier than expected with the whale.

First we hit up Home Depot for the materials, which consisted of one 4 by 2 sheet of plywood (which cost about $10.50) and a can of Minwax dark walnut stain (which was just over $5, but we used very little of it, so I'm calling that the other 50 cents in our $11 whale).

Then we came home and I set to work sketching out a whale on the plywood. I'd spent a bit of time googling and looking at whale outlines and practicing drawing little ones to use as a template. I was a little intimidated by the prospect of free handing such a big whale--to the point where we briefly considered going to Dave's school and using a projector there to blow my little practice whales up big. But leaving the house seemed like too much trouble, so I went with the just drawing it on the plywood plan. My original whale vision was longer and skinnier than what I wound up with. The proportions of the plywood forced me to either make a fatter whale or a less tall whale, and I wanted her tall enough to take up most of the space above the board and batten. 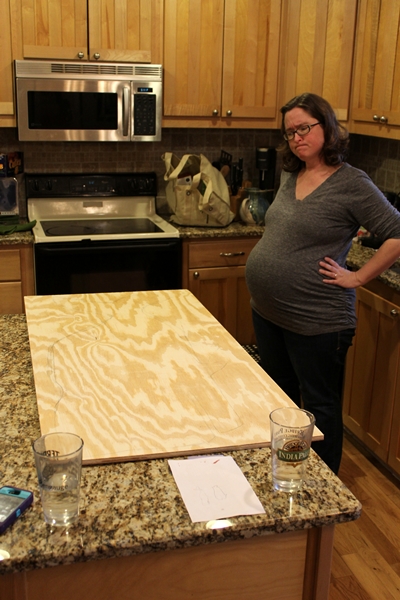 Apparently, I made faces like this while I drew her. There was much erasing and redrawing to try to get it just how I wanted. The tail was especially tricky. 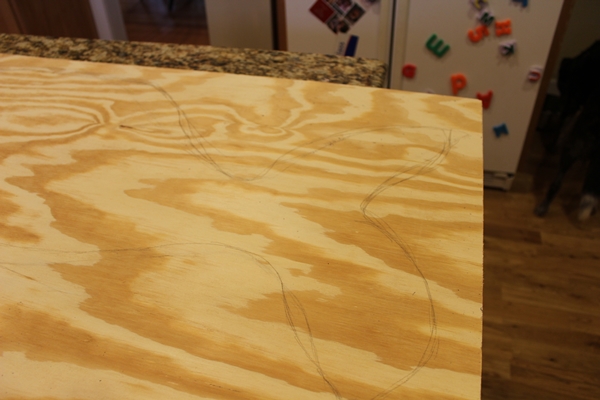 And then Dave said, "umm, which of these lines am I supposed to cut on?" And suggested that perhaps I should go back with a marker and make just ONE whale outline for him to cut out. Gah. So demanding! 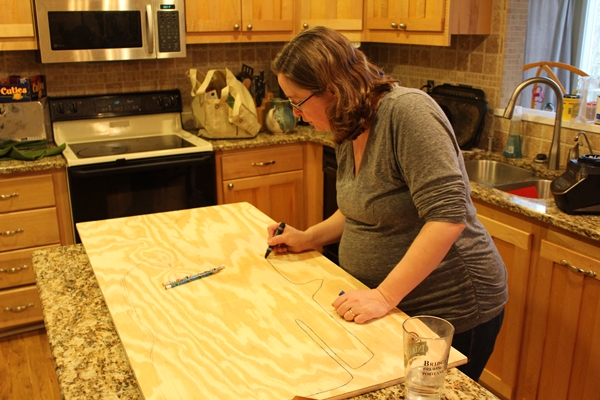 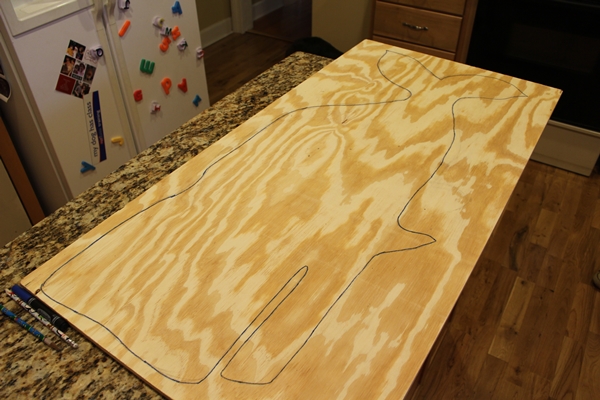 Then Dave took her down to the basement, got out the jigsaw, and started cutting. 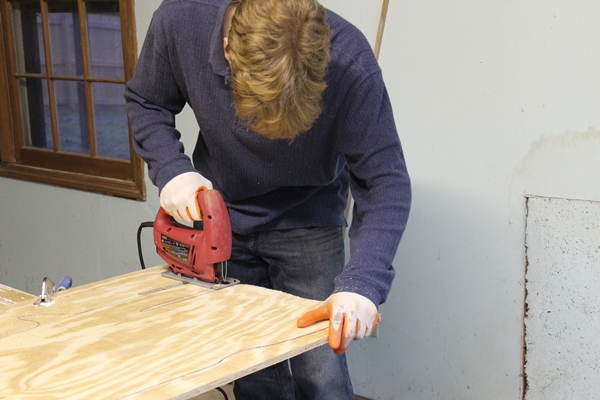 We are very gendered in our whale-making division of labor. When I was in sixth grade, everyone had to take a six week "industrial arts" class. When it was time for me to use the power saw, I was so freaked out I was shaking, and everyone came over to stare at me and ask, "what's wrong with HER?!" And, to this day, a power screwdriver is about as hard core as I'm comfortable getting with power tools. I can't even watch Dave use the saw. I took this picture and then ran away. 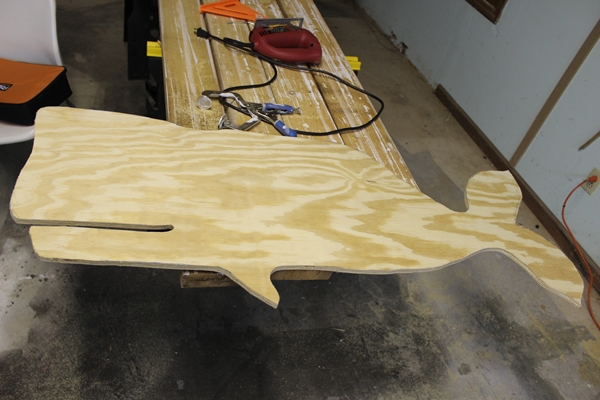 Dave apologized because cutting the line for the mouth was a little tricky, and the whale wound up smiling at us a little. But I think it's awesome. Who wants a grumpy whale? 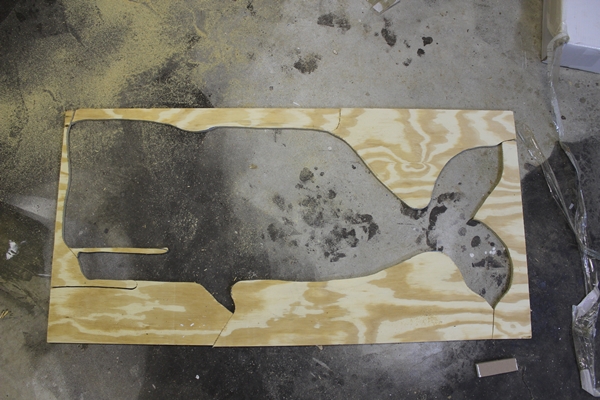 Then he sanded down the edges with the power sander.

Okay, so the original plan was that I would put a coat of stain on the whale, then I would paint it a light gray with my DIY chalk paint, then I would go back and distress it to let some of the stain show through.

Only then I started to put the stain on and immediately loved it that way. 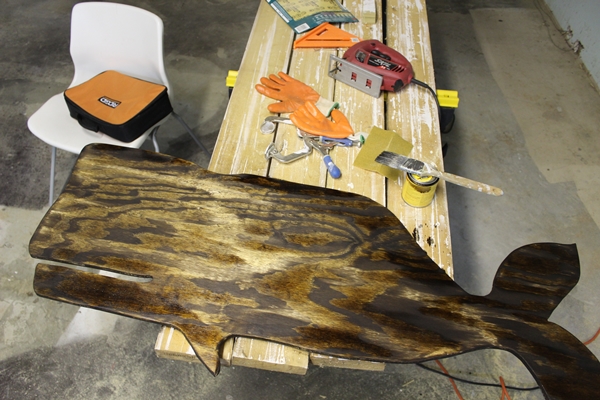 I waited until the next day when it was dry and held it up to the wall to make sure, but, yeah....I totally changed my mind about the paint. There's a LOT of painted wood in the nursery already, and I really like the one natural wood thing to give the room a little punch. And I like the look of stained wood against the Newburg Green. Also, less chance to mess the whale up if I eliminate one of the steps!

We considered a few different options for hanging the whale, but, since it was going to hang directly over our tiny baby, we decided we weren't really comfortable with anything less than attaching it directly to the wall with heavy duty anchor screws, even though this meant drilling holes in our fresh whale. Dave even went with two of the 400 pound anchor screws for good measure. We didn't weigh the whale, but I'm reasonably sure it's less than 800 pounds. 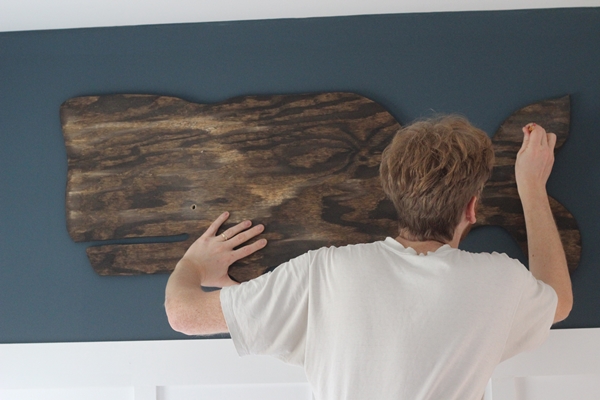 Gus was really sad that we covered that one hole up, because it kind of looked like the whale's eye. 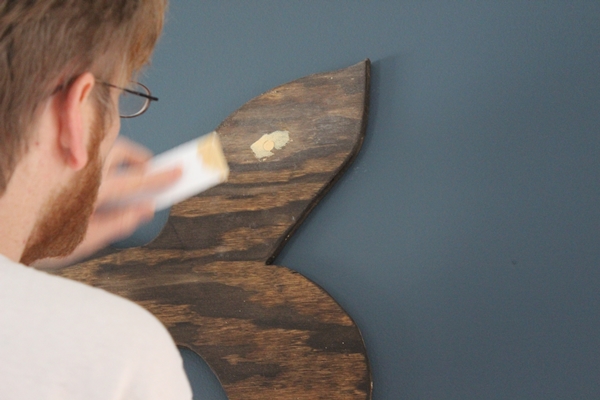 Dave hung it up, countersunk the screws, filled them in with wood putty, then sanded and stained over them. You can see where they are if you know where to look, but they're not, I don't think, glaringly  obvious.

And, one more time, the finished whale! 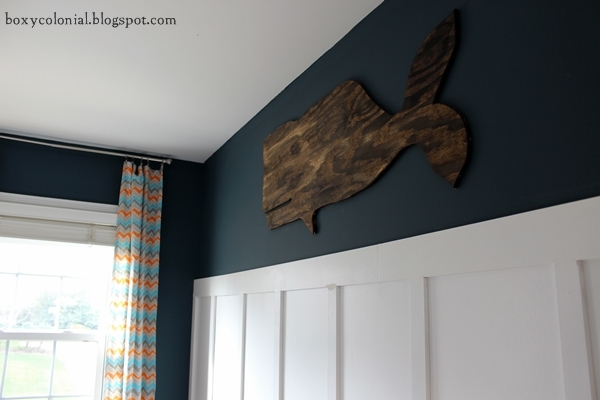 We decided she was a girl and named her Martha, after Martha's Vineyard.