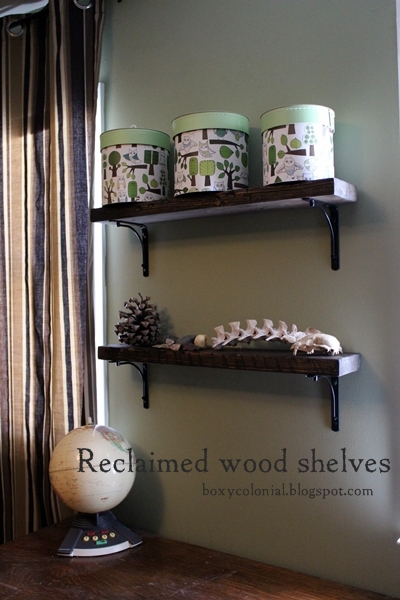 Thursday morning I had a baby, but Wednesday night I was at Home Depot, buying shelf brackets for this project.

When I saw the announcement for the 15 minute/$15 project link party from the Do It Yourself Action Squad (Broke Ass Home, Middle Class Modern, Sandpaper and Glue, and Interiors by Kenz), I immediately thought of doing this project for it, because I was pretty sure it would fit the criteria, and it was already my next planned project. But then I was worried I'd have a baby and not have time to get it finished. But THEN because I am so awesome Dave was home to do pretty much everything while I held the baby, I did BOTH!

Disclaimer: I have no idea how long we actually spent making these shelves, because when you have a brand new baby you get interrupted every three minutes. But I think, in theory, with no baby, one could conceivably finish at least one of these shelves with something like 15-20 minutes of hands on time. Let's pretend. I just had a BABY, so I deserve a little leeway, right?

It is right on with price, though, per shelf: we already had the wood and stain, and the brackets were $6 each, so $12 a shelf! Yay!

I should have taken a before picture of the kids' desk (this in Milo and August's room) to show you why we needed these shelves. But, really, I'm pretty sure if I wait a week it will look just the same, and I can take a "before" picture then. Picture a sea of legos, paper, a wallet that Milo claimed was irretrievably lost just last night, raccoon skulls, etc. all over the desk surface. I thought it would be a good idea to have a designated display space for some of that crap, and Milo and Gus were very pleased about that idea.

Looking around online, I found these reclaimed wood shelves from West Elm that were pretty much what I had in mind and would fit in nicely with the forest room thing we have going on in there: 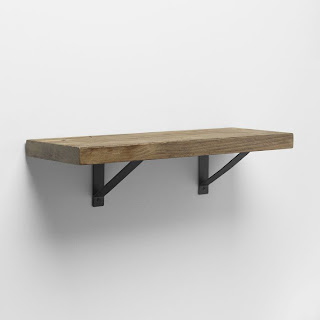 Here's what we did instead.

We "reclaimed" some wood from under our deck. I had wanted to use the wood from the old stairs we tore down, but that wood had been out in the weather and was soaking wet, so what we wound up using is actually brand new wood, leftover from the new stairs. We used a 2 by 6 board.

Next we measured the space where we wanted the shelves and decided on 28" for the length. 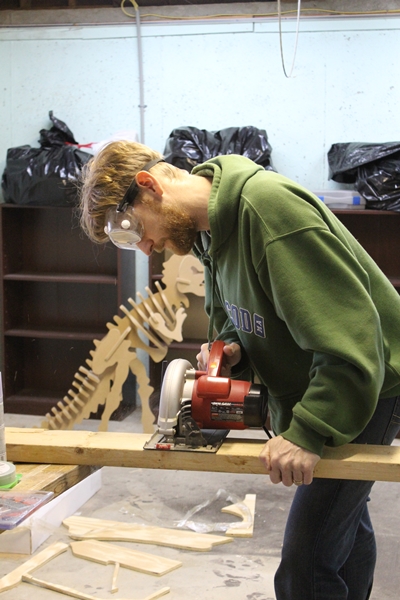 I had to take a picture of Dave cutting the wood because, he told me, "I like for there to be pictures of me using power tools on the internet."

Next up, we let the kids "distress" the wood to make it look more genuinely reclaimed. And also because kids like hitting things with hammers. Warning: if you let your three boys distress your wood for you, it might wind up REALLY distressed. I was kind of worried when I saw just how distressed our poor boards looked when they were finished, but once the stain was on it looked okay again. Dave got so carried away with the distressing that he forgot to take pictures of the kids doing it (I was upstairs, shielding the baby from all the chaos). So we had to recreate the scene: 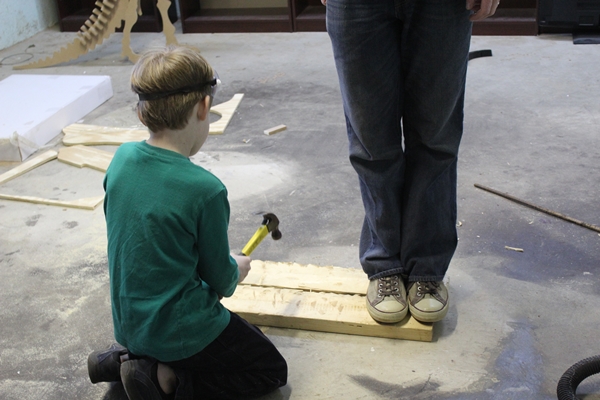 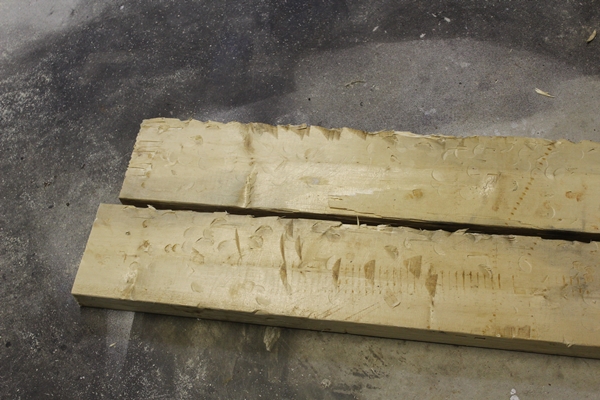 After the enthusiastic distressing (which consisted of just banging assorted hammers, screwdrivers, etc into the wood), Dave gave everything a quick sanding with the power sander.

Then we brushed on the stain (Minwax's dark walnut, leftover from the whale) and let it dry overnight. 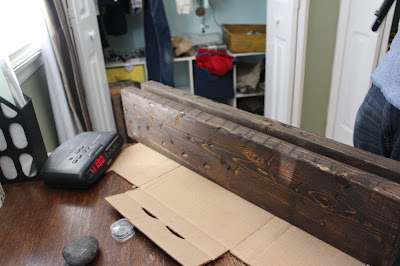 We bought two different sets of brackets, because we weren't sure which ones would fit. The ones I liked better turned out to be too big: But they also would have put us $2 over budget, so perhaps it's just as well. 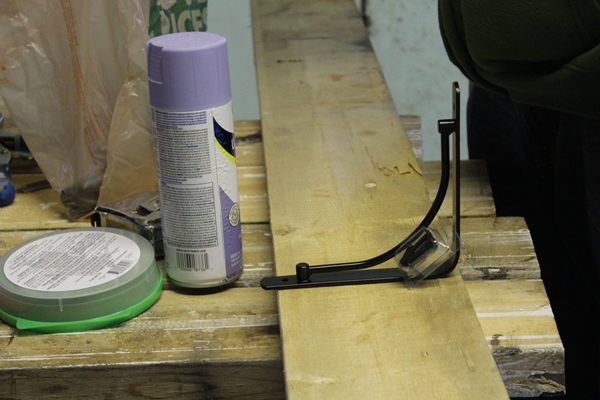 The ones we used are really not dramatically different; I just thought the too big ones looked a little more rustic. Incidentally, you could also buy the super cheap (under $2 each) brackets to make this a really low cost project.

We hung up the shelves over the kids' desk: 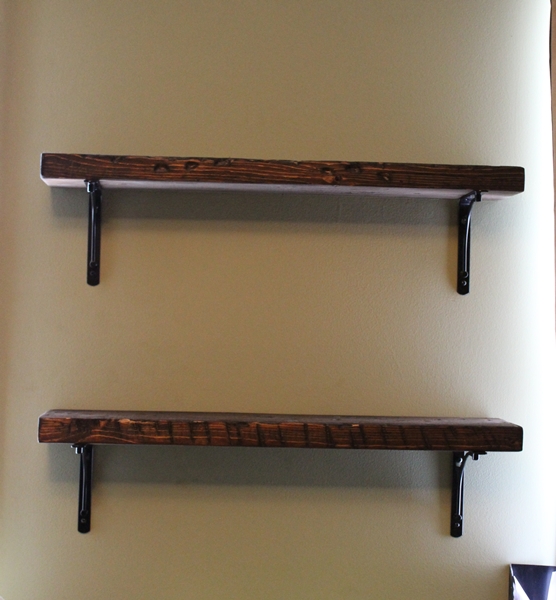 And then I put some of the stuff that had been hanging out on the desk on the shelves, to make them look pretty....for now, until I let the kids take them over and they are filled with lego airplanes instead. 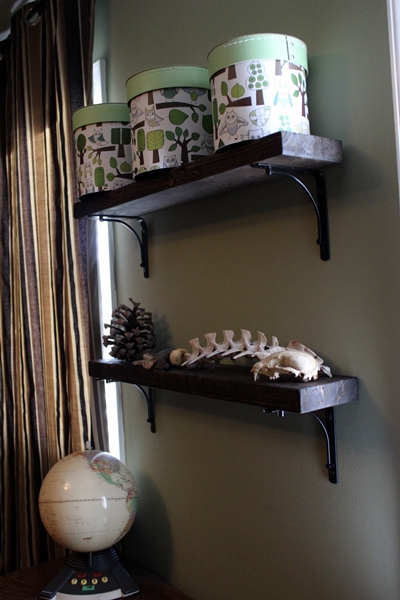 This is the desk, by the way (I have a few more little things to do in their room, and then I need to take updated pictures of it). I found it at the thrift store for $50. The thrift store had it labeled an "Abe Lincoln desk" for reasons I cannot guess. Anyway, it's a cool old desk. And HUGE. We had to take the top off to get it through their door. 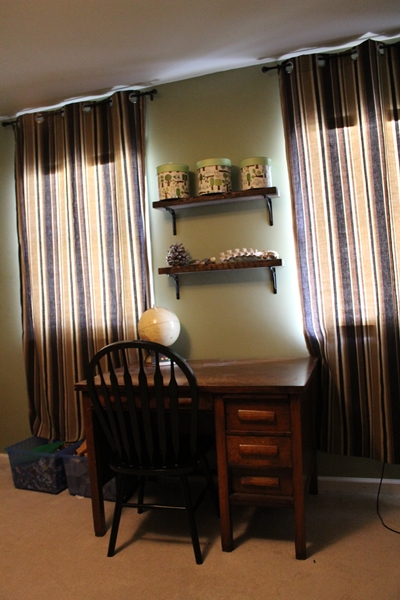 Look how clean it is now! (well, was. It's been a good half an hour since I've been upstairs to check on it).