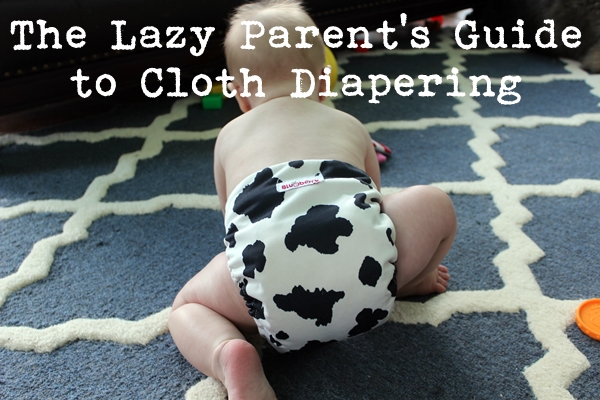 Back before my now 12 year old, Ari, was born, I would tell people we were planning to use cloth diapers and encounter skepticism. "That won't last!" older, more experienced parents would tell me. Naturally, I took this as a challenge.

So, from the beginning, failure wasn't an option. Admitting defeat is not something I'm good at.

In light of this, it was a relief to discover that....cloth diapering really isn't that big of a deal.

I mean, I never knew any different. We put Ari in cloth as soon as he came home from the hospital, and never looked back. When Abe came along, he spent a couple of weeks mostly in disposable diapers because he was so relatively tiny that he seemed to be drowning in all the cloth diapers I had. I was utterly horrified by how much we spent on disposable diapers and how much trash we generated during those couple of weeks.

Plus cloth diapers are cuter.

There is a LOT of information out there in internet land about cloth diapering. One could get overwhelmed.

My way is not overwhelming. This is not to say that it is the only way or the best way, of course....but I've put diapers on four baby bums at this point, and they all still seem okay, so....this is the non-overwhelming, uncomplicated, lazy "system" that works for us.

Okay, without further preamble, here's how we do diapers around here:

1. All pocket diapers, all the time: I've messed around with other options, but I always come back to pocket diapers. I was fortunate enough to have my first baby right around the same time pocket diapers were hitting it big, so I've always been able to rely on them. The idea is you have a waterproof outer layer and a fleece inner layer, and then a pocket in between into which you stuff an insert. The fleece wicks the moisture away from the baby into the soaker in the middle. When you change the baby, you pull the insert out and then toss both parts in your diaper pail.

I like pocket diapers because they keep babies dry. A wet baby is a sad baby, in my experience. Now you might say, "oh, but I will change the baby the second the pee touches him, so it doesn't matter what kind of diaper I use!" But sometimes babies pee when they sleep. And, if they are like my babies, this can wake them up if they're not wearing a diaper that magically wicks the pee away from their skin. And things that wake up sleeping babies are BAD things. Evil things. So we can see, through basic logic, that non-pocket diapers are evil. Or, well, anyway, I like pocket diapers best.

I've used Fuzzibunz with all 4 of my kids, and I still love them lots. But there are plenty of other brands these days, too, and most of them are fine. I was very, very lucky to get almost all of Abe's diapers as hand me downs from friends this time around (I even have some that I used for a couple of my kids, passed on to friends, and have now gotten back for Abe), so I've bought very few new diapers for him. Some of the brands I have in rotation at the moment are Fuzzibunz, Green Acres Designs, Blueberry, and Swaddlebees. You can get sized diapers or one-size diapers that adjust with an elaborate system of snaps to fit newborns through toddlers. I like sized diapers because they're generally trimmer fitting, but you save money by getting the one size and not having to buy new diapers as the baby grows.

2. One diaper pail, two waterproof liners: I have a metal step trashcan that I bought at Target as my diaper pail. I have two waterproof bags that I use in it. One of them I've had since one of the other kids was in diapers; the other is this Planet Wise Diaper Pail Liner. When the pail's full (every 2-3 days, usually) I dump the diapers and the bag in the washer and put the other bag in the pail.

3.  Wash them pretty much like regular clothes, only hotter: I'm going to talk about poop for a minute here. Right now Abe's still eating almost no solid food to speak of, so his poop is not very solid. Once it is, I'll dump anything dumpable out in the toilet before I put the diaper in the diaper pail. Here's how I wash diapers: 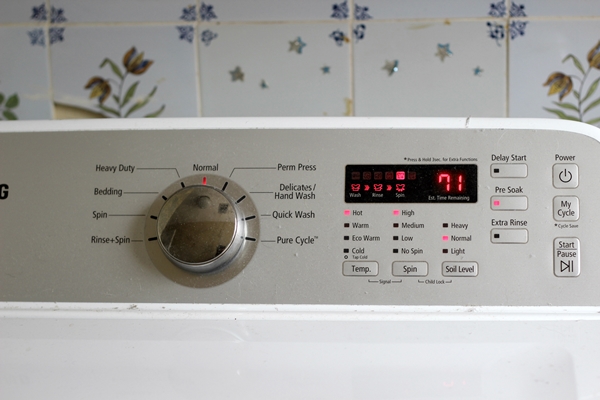 (that tile? In my laundry room? We did not pick that out. It came with the house. Complete with broken parts and sparkly star stickers.)

The only thing I do differently from any other load of laundry is a pre soak and washing on hot. I use regular detergent. If I notice things getting stinky, I toss some vinegar in the next time I wash diapers. The end.

Then--and here's something I do differently (and more lazily) now than with my first couple of babies--I put them all in the dryer. I used to hang my diapers to dry. But then I noticed that the care instructions for Fuzzibunz actually tell you to put them in the dryer. So I tried it. And it was all fine. So I kept doing it. And, as I've mentioned, some of those diapers have made it through four or five kids in two different families now and are still hanging in there.

4. Sort them and toss them in a drawer: Sometimes, if I'm feeling really ambitious, I put the inserts in the diapers when they come out of the dryer, before putting them away. Lots of times I don't. Our nursery dresser/changing table has a big drawer in the middle divided into three sections. One section gets diapers, one gets stuffers, one gets wipes, the extra diaper pail bag, whatever I can't fit in the other two sections. It looks like this: 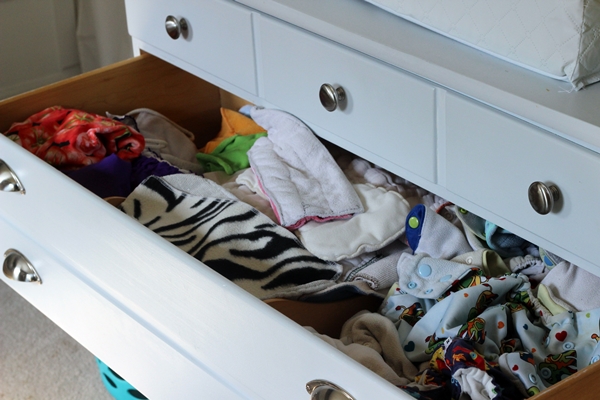 See? Nary a neat stack of diapers to be seen. But it works! It takes me less than five minutes to sort through the laundry basket and put them all away. I've actually timed it.

I have a little basket that I put a few diapers and wipes in to keep in the downstairs bathroom. I have a smaller waterproof bag for down there that I put the dirty diapers in and then bring up when it's full: 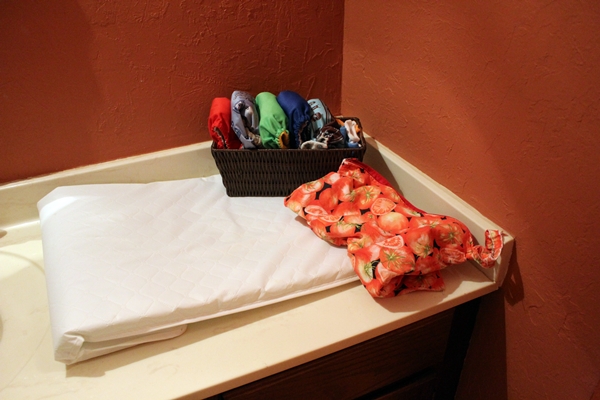 (I have a cover for that changing pad, but it was in the laundry) 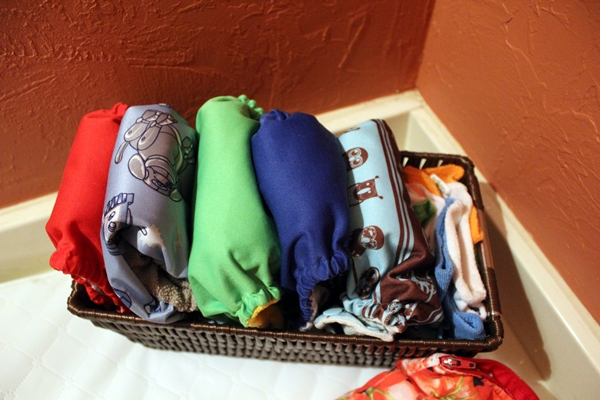 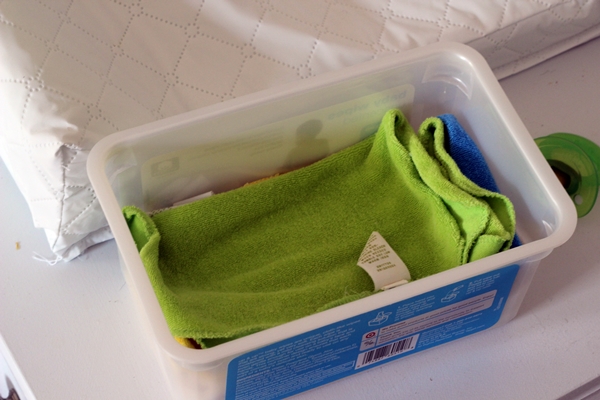 (I have a cover for that changing pad, too. It's kind of nice, even. Minky. Too bad you can't see it).

So there you have it. My secret to amazing my extended family with my cloth diapering longevity despite not having much of a work ethic when it comes to laundry! And I did some very official figuring, and concluded that we've spent one billion dollars less than we would have with disposables and single handedly saved the world by using cloth. You're welcome. (I am kidding, by the way. Everyone knows the cloth diapers have to be made from 100% organic hemp to really save the world. Also not using the dryer helps).

Email ThisBlogThis!Share to TwitterShare to FacebookShare to Pinterest
Labels: baby