Mini Kitchen Makeover: I Sort of Hate the Word Greige 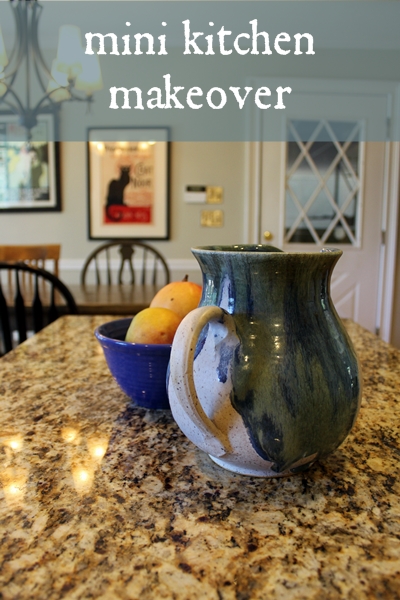 At some point over the past couple of weeks of doing this mini kitchen update (I'm hoping for a bigger kitchen update sometime soon, as discussed here) I realized that my kitchen could now be a museum exhibit from the future: "Typical Blogger's House, c. 2013." Granite countertops. Farmhouse table. Chalkboard Wall. And now....greige walls. Benjamin Moore's Revere Pewter, specifically.

I didn't mean to paint the walls Revere Pewter. I was resistant because everyone talks about how awesome it is, and I didn't want to do the same thing as everyone.

Also, apparently, I really wanted a paint color that was named after an animal, because I went to Benjamin Moore and came back with samples of Gray Horse and Gray Owl: 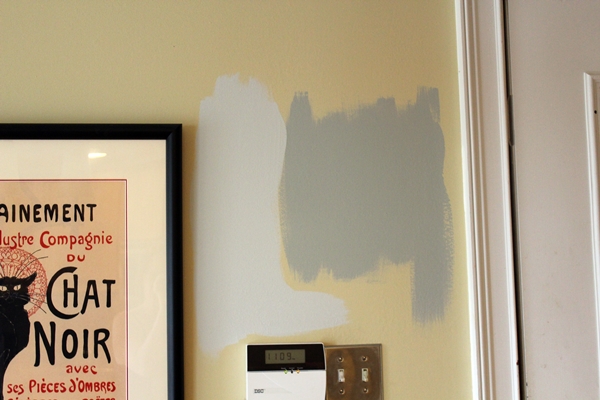 That's Gray Owl on the left, and Gray Horse on the right. I liked them both, but neither of them was really right for this room.

The kitchen is one of the rooms that had been updated by the former owners. The cabinets and counter tops and backsplash are all newer, good quality stuff. But not what I would have picked and kind of limiting in some ways. The cabinets are a light colored, sort of orangey wood. The granite is gray-brown speckly. The backsplash is, I believe, tumbled marble--really nice and really....tan.

I've had a really hard time picking a color for this room. I've been gravitating toward cooler colors, lots of blues, for most of the house, but that just wasn't going to work in here. So I liked Gray Owl, but it was too silvery and cool to go with the tile and counter tops in the kitchen. Gray Horse was closer, but it was a little dark and looked too green in some light.

The worst thing about Benjamin Moore is that they don't sell a true sample size of paint. You have to buy a pint, and they cost something like $8. This can add up very quickly when you have no idea what paint color you want.

So after those two didn't work out, I just went all in and bought a whole gallon of Revere Pewter. I had been looking at it online in 100 different rooms for pretty much a full year, after all, so I figured I had a pretty good idea of what to expect.

Well. You know how sometimes after you've painted a room, every time you walk into that room you're struck by how different and awesome it looks? Yeah. That didn't happen. It went from a  neutral yellow to a  neutral beige-y gray.

Which is not to say I'm unhappy with it. I think it's exactly what the kitchen demanded. The main thing Revere Pewter has going for it is that it's truly, truly neutral. It has no blue or pink or green undertones like a lot of grays and beiges and taupes do. It is all tan and gray. And it's very pleasant. It's just hard to get excited about it. I know some people manage to, based on all of the glowing Revere Pewter reviews online. I'm just not a very....neutral person.

One thing I'll give it--I totally and completely understand why someone had to invent the word greige now. As soon as it went up, I was all, "it's gray! no, it's beige! gray! beige!" It's pretty much impossible to decide. As near as I can figure, it looks more gray the more natural light is hitting it.

So here it is: 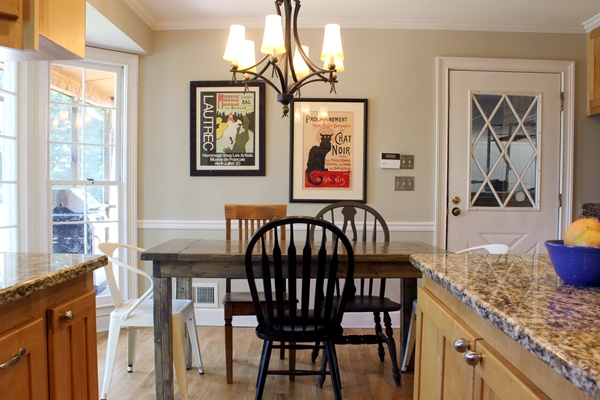 I took it from this angle so you can see the granite and cabinets in the same shot with the walls. 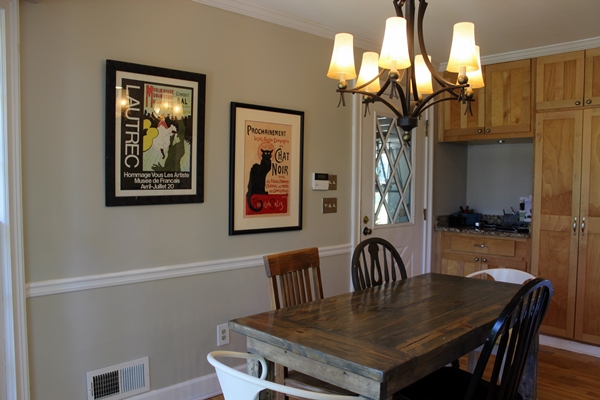 And here's the other side of the kitchen, as clean as it ever gets! 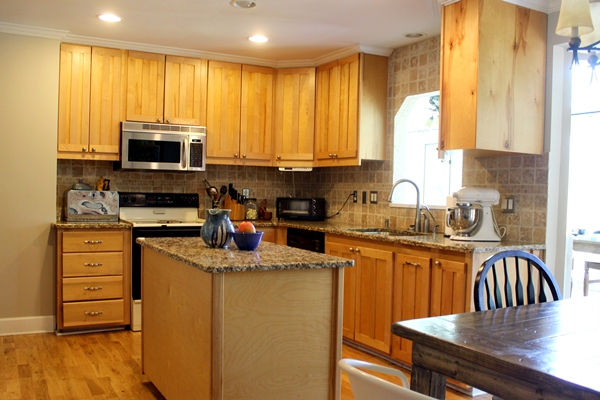 So there you can see it right up against the cabinets on that one wall on the far left, and also next to the backsplash. I think this is a good representation, too, of how it looks much beiger without natural light. This half of the kitchen only has that one window that goes into the sunroom; it's very dark without the overhead lights on. The other half has the big bay window to gray things up. Although the bay window goes to the screen porch, so still not as bright as it could be. And as it WILL be if I get my wish to knock the wall out there. I guess I should mention that the gray side of Revere Pewter is my favorite side, so I'm hoping to bring it out more by bringing in more natural light. Someday.

Oh, one more thing re: paint. I sent Dave out to buy the paint, and he had to go to not our regular Benjamin Moore store, because that one's closed on Sundays. I told him I usually ask for the "middle" quality paint. So when he came back with this "Regal" paint that cost nearly $50 (!), I thought he'd totally been scammed. We usually pay more like $35. But I have to say--that paint? was incredible. We didn't prime, just slapped a coat on there, and there was no question that one coat was plenty. This never happens to us. We always have to at least go back over big portions with a second coat, even if we don't redo the whole thing. Also, we barely touched the gallon, between the amazing coverage and how most of the kitchen is cabinets and windows and such. I think I could paint my whole house with the rest of the gallon. Not really. But definitely my den. And I just might.

Linking with:
The Inspiration Gallery
The Shabby Nest's Frugal Friday
Inspire Me Please
Tatertots and Jello's Weekend Wrap-Up Party
Monday Funday
The Inspiration Exchange
Posted by Gretchen at 7:00 AM