The former owners' decorating choices get a little more....interesting when you get upstairs. There are 4 bedrooms up there, a laundry room and hall bath, plus a ridiculously big master bath and closet. Before we saw the inside of the house, I was expecting the room over the garage to be a bonus room. But no. It's all closet and bathroom. 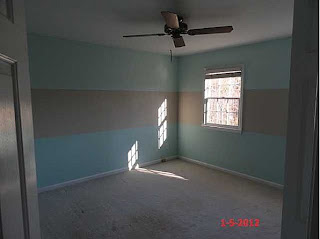 At one end of the second floor are two decent sized (around 12 by 12, IIRC) bedrooms. This one has two closets, so it ended up being Milo and August's room. 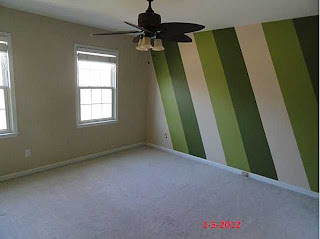 And here's the other one, Ari's room. You can't tell from this picture, but each of the non-stripey walls was painted a different color--one to match each of the stripe colors. Also, oddly, there's a really nice ceiling fan in this room. I say it's odd because it's such a big upgrade from the ones in all of the other rooms. Why did this room get such a fancy fan? We will never know. 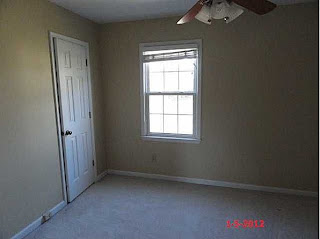 The guest room. It's a good bit smaller than the other bedrooms. We thought about using it for a nursery once we realized we were going to need a nursery, but we'd really like to have a dedicated guest room, so we have an alternative plan for a nursery. If this baby is anything like the last one, the nursery will exist mostly as a place to keep clothes for long time anyway, and we'll have a baby sleeping in our room. Eventually, we'd love to finish the basement with a big rec room and a smaller guest room/bath, and then this room will become another kid room. 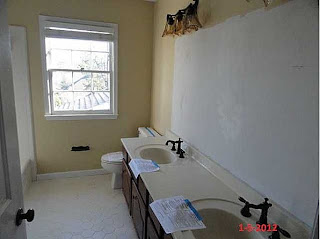 The hall bath. Our realtor's theory about the missing mirror (in this bathroom and the downstairs one) was that it had cracks in it, so the bank took them down for safety/not wanting a lawsuit reasons. Since not having a bathroom mirror wasn't practical long term, and since there was that big bare spot on the wall and no way of matching the paint, this room was one of the first to get a quicky makeover so that we could hang up mirrors. This is another room that fascinates me....I'll post a better picture of them later, but the light fixtures above the sinks are really, really cool. The faucets had also been updated. But nothing else in the room. Someone apparently got started on a nice update but didn't finish for one reason or another. 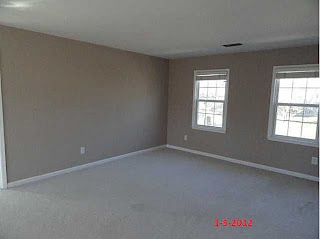 Master bedroom. The picture does not show it, of course, but this room is really, really long. Like 29 feet long (by about 13 feet wide, I think?) Which is why we came up with the idea to put up a wall with french doors to section off one end of it for a small nursery, which can later be a library or sitting room or office or whatever. I've always poo pooed the idea of a sitting room in a master bedroom as something that would never get used....but as my boys get bigger, I'm definitely starting to see the appeal of having a place to retreat to. 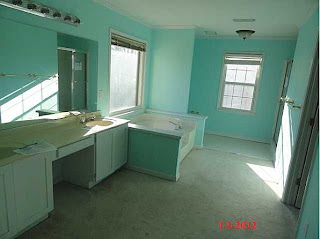 Master bath. My goodness! What's going on in here!? What an....interesting color (painted over wallpaper, incidentally). An eclectic blend of fixtures from 3 different decades! Chrome light fixture, brass towel rack, bronze nipple lights! Cabinets that don't exactly close! Disgusting, stained carpet! Big enough to park a truck in! We haven't done anything in here yet, even though ripping up that gross carpet was one of my biggest priorities moving in. We're a bit overwhelmed by the sheer size of this room. But AT LEAST replacing that carpet with some kind of tile (our first attempt at tiling!) MUST be done before the baby comes. I'm not letting a baby touch that carpet; it's bad enough that I have to.

So there you have it. The whole of the Boxy Colonial. Eventually I'll post some pictures of the outside and maybe the basement, but both are more or less blank slates at the moment. Actually, if we fulfill our ambition to make this weekend Firepit Weekend, you might get to see some yard action sooner rather than later.
Posted by Gretchen at 12:04 PM

Email ThisBlogThis!Share to TwitterShare to FacebookShare to Pinterest
Labels: house tour, the house