Picture ledge hanging: proving we can accomplish things on weekdays, too

We picked up the picture ledges during the shelf buying Ikea expedition, so....almost a month ago? They've been leaning against various walls ever since. They started out in the foyer and then made the big move into the den where they belong. And then they sat there until last night.

My original plan was to put a gallery wall here, but we ended up with the picture ledges for a couple of reasons. It's easier to switch pictures around from time to time, helping to prevent the problem we've run into historically with pictures, wherein all the pictures of August stop when he is 2 because the wall's full and I stop ordering prints. Also....easier. Although it took a bit longer than I expected to get everything hung up....we had one long and one short Ribba picture ledge for each of the two planned rows, so we needed to make sure they were level, and even with each other, and decide on the height and spacing and all that. 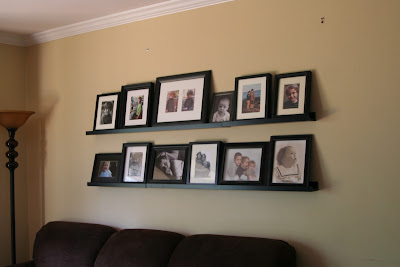 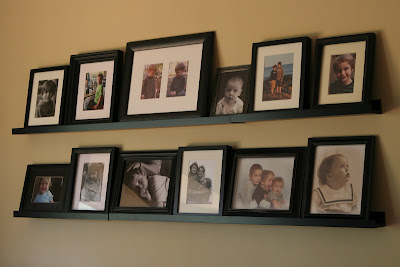 Walls around it are still looking a little bare (and this is a room that still has the original paint; plan is for this room to end up some kind of taupe, but I'm a little gun shy about picking it out; it seems like a lot can go wrong with taupe). We're thinking more photos hanging around the ledges (like maybe some of our favorites, so we're less likely to want to switch them around in the near future). We also need more light in that area, so that we can actually see the pictures. This room gets less natural light than the front rooms and the only light in there right now are two sort of....spotlights over the fireplace and a couple of lamps. Like with the library, we're not sure whether we want to spring for more overhead lights or just buy some more lamps.

But I will just bask in this sense of weeknight accomplishment for now. And admire how much smaller the big pile of pictures got last night: 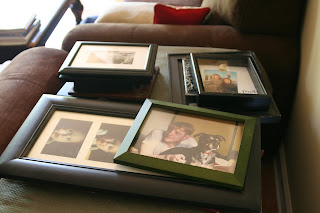 Aww, look at that one on top: it's Dave and Oliver, my favorite dog ever (who died about a year ago, at 16. This is back when Dave was in college (I had just graduated) and Oliver was around 2 or 3): 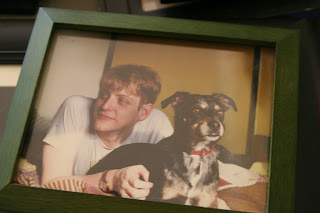 It didn't make the cut for the picture ledges because it's not in a black frame. Oh! I hope it comes out of that frame okay; it appears to be unmatted. And this is a picture from pre-digital days; I suspect the chances of me managing to find the negative somewhere are pretty much zero.

Email ThisBlogThis!Share to TwitterShare to FacebookShare to Pinterest
Labels: den, the house