I am not, historically, someone who decorates extensively for holidays. I mean, we put up a Christmas Tree. And we usually talk about putting up lights and then don't get around to it. But I LOVE holidays, and I love at least the idea of decorating for them, so I am trying to turn over a new leaf here.

My attempts to become a better person through seasonal decorating started last year, right after Halloween, when I bought what seemed at the time to be a whole bunch of Halloween stuff on clearance. And then I added to my stockpile throughout the year with thrift store finds.

But when I pulled it all out this year....it didn't seem like as much as I had thought. And also I didn't like some of it anymore. So another trip to Target for sadly non-clearance stuff was necessary.

I'm still tinkering. Somewhere around here we have a big, garish light-up Frankenstein who needs to hang out on the front lawn I guess. He's not quite as....classy as I like to think my other stuff is, though, so I'm holding out and making excuses to the kids when they ask about him. But we did quite a bit this week, so it's coming along. 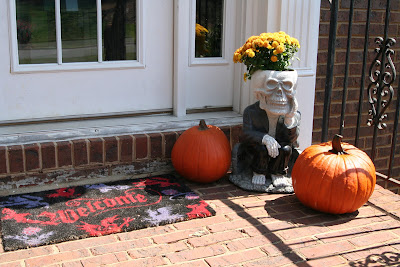 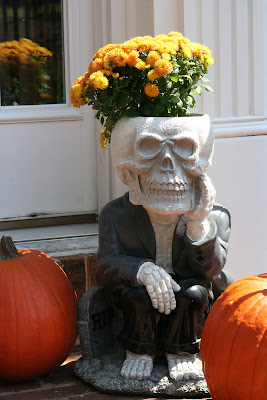 This guy was a thrift store find a few months ago (and the doormat was one of my clearance Target buys last year). I'm not sure if he's supposed to be a plant holder or not (we might replace the mums with candy on Halloween), but I thought they would be fun. 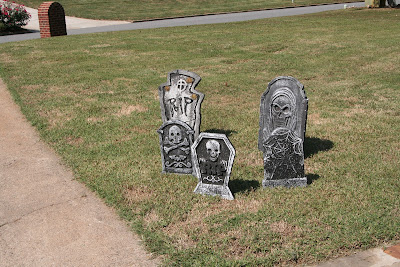 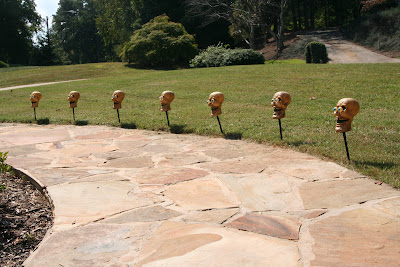 Graveyard from combo of dollar store and Target clearance tombstones. And those skulls are from the thrift store, too. They're supposed to light up, but I don't think the lights work. I might ask Dave to tinker with them a little more to make sure. 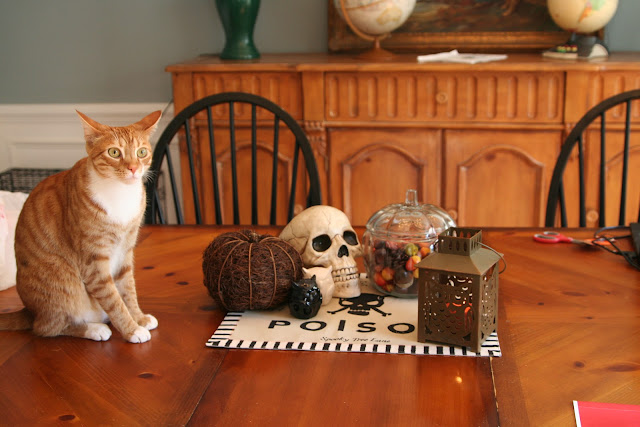 Then we have my attempt at a centerpiece. Which I cannot seem to leave alone. Gavroche the cat wanted to be in the picture because he's all orange and Halloween-y. Okay. So the owl candleholder and the brown pumpkin are from the $2.50 section at Target, and the fake acorns and pinecones and whatnot in the glass pumpkin are from the $1 section. They keep settling, so I need to go get more. Everything else is from their regular Halloween section, and I think it was all in the $2-6 dollar range. Word of warning: the owl candleholder is adorable and all, but it doesn't open up, so it's really hard to get the damn candle in there. And then, when you do, it burns down to nothing in half an hour, and you're back to start. Grr....

This is the first incarnation. Turns out everything has moved around almost as much as the cat. 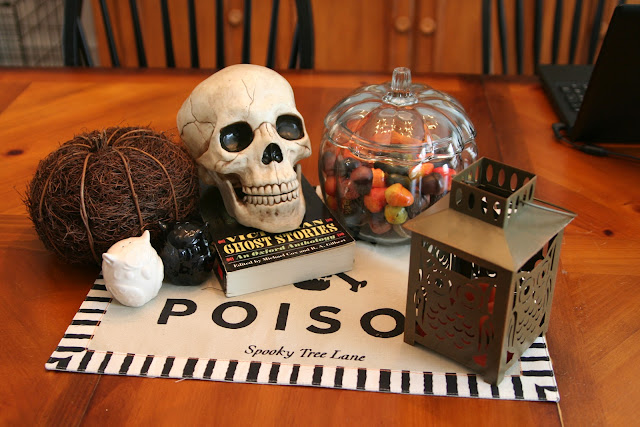 But everything was kind of too level, so I started adding in books. First up some Victorian Ghost Stories... 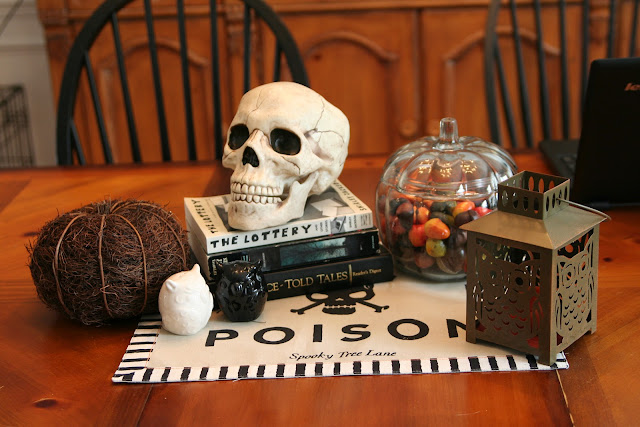 More books! I'm not sure why I turned the skull the other way for this one. We are not as well stocked on Halloween appropriate books as on some other genres, but I did my best. Shirley Jackson's The Lottery...doesn't get much creepier than that story, right? And Hawthorne's Twice-Told Tales. I can't remember for sure, but I think maybe some of them are scary? Or at least vaguely gothic? Then Kristi came over and I told her about how I'm still worried it's too same-heighty, and she suggested tall candlesticks. Yes! I think it needs that. They didn't have any at Target, though, so I will have to keep looking. 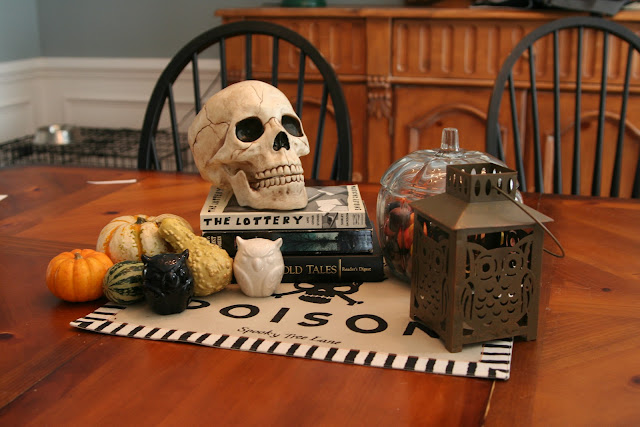 And THEN I thought the stick-y brown pumpkin was too much the same size as the glass pumpkin, so I bought a million gourds for 69 cents each at Trader Joe's, and did this. And that was just a couple of hours ago, so who knows what will happen next. I am new to centerpieces. Also, I should mention that the cats like to lick the gourds. I don't know what's up with that.

Linking with Everything Fall Link Party at My Uncommon Slice of Suburbia
Posted by Gretchen at 5:05 PM